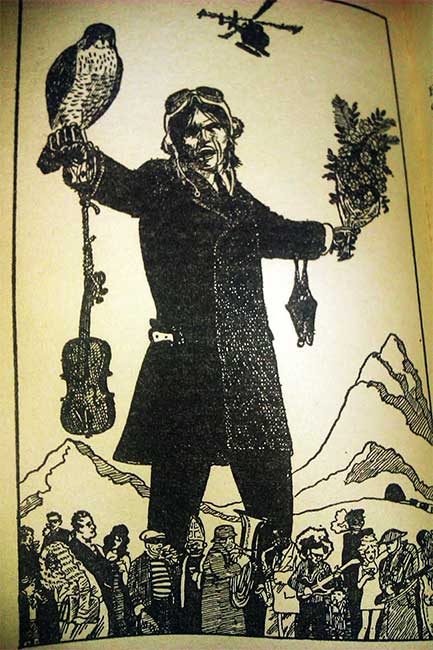 ‘Race against the clock: why is so much TV jumping through time?’

As he meandered his way across Europe and back again, Jerry Cornelius spent £700,000 of public money and shot 45 miles of disjointed, unsynchronized film and audio tape. He welded a shelter together from car wrecks, then wired it up with contact mics and sensor pads to pioneer the kind of kinetic cinema the likes of which had never been seen before. He could tint space any colour he wanted, using light shows and sugar cubes, arcane phrasing and random voltage fluctuation.

Jerry was a pretty-boy mod fop who played a bit of harp and was best known around Notting Hill for his dress sense. Eschewing beatnik drab and hippy orthodoxy, Jerry dressed in regatta drag and desperado chic, then recruited a bunch of like-minded down-and-outs to create a pop group that only existed in theory but would go on to have a number one hit with ‘The Best of Both Worlds’.

‘Our culture,’ said Jerry, ‘has always recognised the importance of the power of time and imagination, and we should therefore revere any band capable of releasing such euphoric visions and fragmentary nirvana as we have. Nobody has tried to make the trivial more sublime than us.’ Pre-recorded music is combined with live improvised electronics and a selection of free-market mantras and gamelan rhythms. They sound random and anarchic on first hearing but there is nothing random about the internal logic of capitalism at play, each sound a counterpoint to market potential.

Jerry Cornelius was the archetypal teenage nerd. When he should have been out chasing girls he was out watching the stars; when he should have been at school he was extracting ectoplasm from liquid light. His lives happened simultaneously: he was a refugee from the Nazis, a painter, a Renaissance sculptor, a fashion model, an advertising sign, a recalcitrant poet, renowned gang leader, collaborator, the FBI’s most wanted, and an IBM mainframe. He understood the need for alterations of consciousness and was determined to provide the vital link between the gullible and the needy. He grew up believing that science was truth and died claiming he had taken a photograph of God.

‘The future will be a spiritual blossoming of life. It is in redefining that we are guided. The cosmos is approaching a tipping point. We must plant the seeds of non-locality rather than suffering. Aspiration is the driver of synchronicity; imagine a deepening of what could be.’

Jerry is streamlined, rationalised, punctual and free-form. She rarely appears in any other form than starburst quotes and infra-dig holograms. When her friends’ patience runs out, she despatches them south of the river. She is proud to be a self-proclaimed, media-fabricated shaman, espousing the tune-in, turn-on, drop-out, jerk-off ideology of avant-garde art. ‘It appears to me that I am at the threshold of a most exciting period,’ she tells herself daily, willing herself to believe. She has no grammar of loyalty, everything is simply an opportunity for more profit and entrepeneurialism.

She asks me to meet her in the most froufrou cafe in Knightsbridge, an Instagrammable shrine of flowers and unicorn statues. It is a strange place to discuss inequality, but we’re having a trip just minutes from Harrods, and Jerry is now worth £3.5 billion.

‘I have been able,’ says Jerry, ‘to uniquely empower process-centric scenarios of wealth generation using trickle-down cloud-ready benefits. Embracing scalable partnerships has allowed me to mesh visionary experiences and transform innovate collaborative communities willing to generate their own wealth platform.’

‘If you start your own company and you run your own company, you can pay yourself as much as you want. If you run a company funded by other people’s money, you have to be careful, let there appear to be a proper balance between what you get paid and what the others earn.’

‘Well’, I say, ‘we all have to share the pain when there’s pain to share. Here’s to building seamlessly integrated profit vectors!’

‘New ketamine-related drug could be “watershed” in treating depression’

Jerry is cautiously optimistic that a drug related to ketamine, recently approved by the National Drug Federation, could be a ‘watershed’ moment in the treatment of ego, and one of the first drugs to be a ‘rapid acting’ medicine to treat the chronic disease. The new drug has been approved to treat people with inflated egos who no longer respond to traditional hallucinogenics.

‘For a long time, all our products have been “me too” drugs,’ said Dr ‘Space Cadet’ Cornelius, who currently holds the position of ‘professor of self-awareness’ at the University of Mind Expansion, and is the sole member of the advisory committee which recommended the drug be approved.

The newly-approved drug builds on years of research into illegal supply chains, addiction and profit margins.

Jerry’s adult life expectancy has been cut by six months in the biggest reduction in official longevity forecasts.

‘We have gone over and over the mutilations and eviscerations,’ says an expert who did not wish to be named. ‘We don’t need to know any more. We have a cognitive bias – Jerry’s death has been conveniently overlooked, because it isn’t part of the accepted story.’

Jerry uses an estimated structural model to assess its effect on her savings. She notes that the differences in life expectancy relating to observable factors such as income, gender, and health all have large effects on capital, and that the risk of outliving one’s expected lifespan has a large effect on the behaviour of interest rates and houe prices.

It’s easier if you don’t really die. Many people mistakenly assume that the good or bad will they generate will come back in future lifetimes, but that’s not what Jerry says. Those who do good deeds will be never be rewarded and those who do bad deeds will never be punished. They are all simply going to die.

She is more into resurrection than reincarnation. When she dies, her spirit and body separate, but Jerry has no trouble keeping hold of the essence of who she is and bringing it back from the spirit world, which is divided into spirit paradise and spirit prison. For spirits who lived good lives, paradise is a place of rest from earthly cares and sorrow, but Jerry prefers her home in West London and reaping the benefits of planned investment dividends from her past.

Her investment plan is as individual as she is. Drugs and alcohol have not reduced her motivation to stay on top of investment and keep focused on her goals. Double frictionless trusts and offshore banking have facilitated viral trading and maximum profit convergence. She has morphed her dynamic functionalities to best practice and can settle down to enjoy her twilight years again, accompanied by crates of the finest champagne and a multitude of friends, musicians and accomplices.

She will live long and prosper.

‘What happens if May’s Brexit deal is voted down? And if it passes?’

If there are multiple possible answers, print one of them. Show it to different people and see if they interpret the possibilities the same way you do. Use this process to investigate how context affects discourse. Synergistically provide access to hyper-scale quality vectors and fashion out-of-the-box strategies.

Jerry gave the same answer as everyone else. ‘I don’t think we really are in a position to say at this stage,’ he told anyone who would listen. ‘Obviously we have a lot of ways of getting information. We’re going to study the situation carefully. After an overlong negotiation period it would be very, very disappointing if we now go in the wrong direction.’

His world resembles a freeze-framed kindergarten where children stare rigidly before them out of blue eyes set in dusty, porcelain-tinted faces.

View all posts by Rupert →
This entry was posted on 13 April, 2019 in homepage and tagged Rupert Loydell. Bookmark the permalink.