The Lion, the Witch and the Breadshed

Posted on 8 May, 2021 by Lawrence Freiesleben 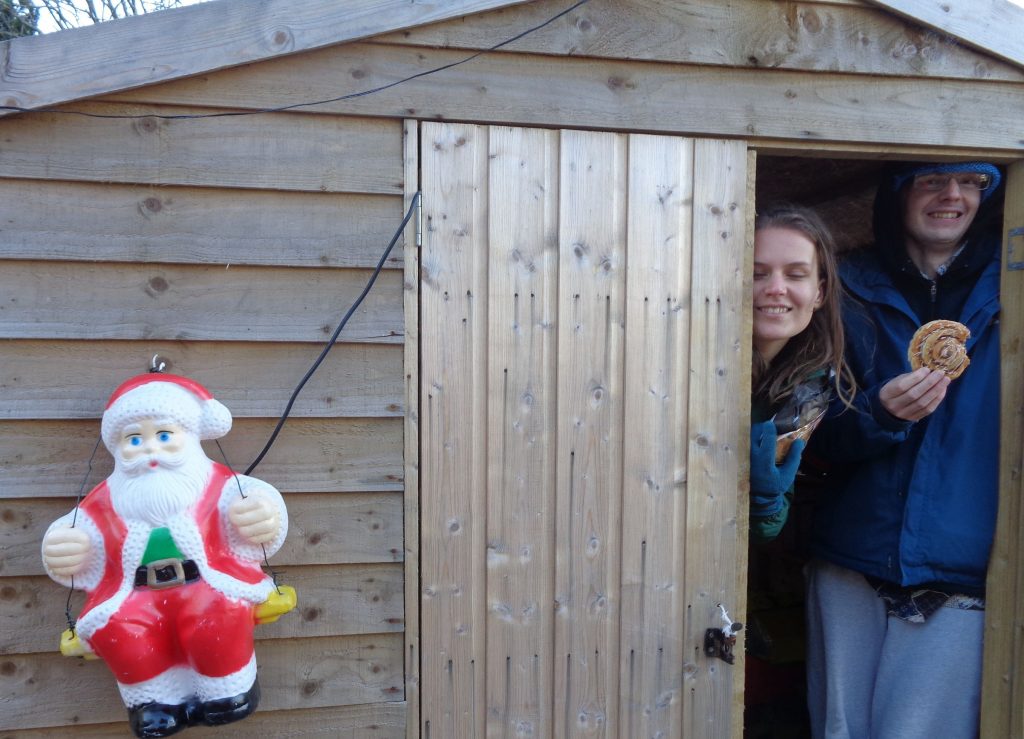 Fairly early last Christmas Eve, the two deadbeats and I, slowly but not too slowly, decided to take advantage of a bright sunny morning, to walk Over the Fell to the breadshed. I mean we’d half decided this the day before . . . if the weather was good, if we felt like it, if the deadbeats got up early enough, if all the astral bodies were aligned and I could get the kettle to work and the marmalade didn’t run out. It’s unfair to call the deadbeats that. For a start, my daughter objects to the name – though not very much. ‘I’m not a deadbeat – I look posh compared to you two.’ This is true. I in fact, am the most deadbeat looking of us. Being considerably older, this is probably inavoidable – but since I applied the name and rarely appear in the photos, I am fortunately invisible. Also fortunately, my son Kit appears to relish the sobriquet, and so, sought out his most deadbeat attire for the journey . . . well, it just happened to be lying in wait in the porch, since at that time of year, washing must be kept to a minimum. Good drying weather is scarce and I’ve never been one to stoop to the use of new-fangled drying devices. Washing has to be in the SUN and AIR. Nothing is really clean without that. 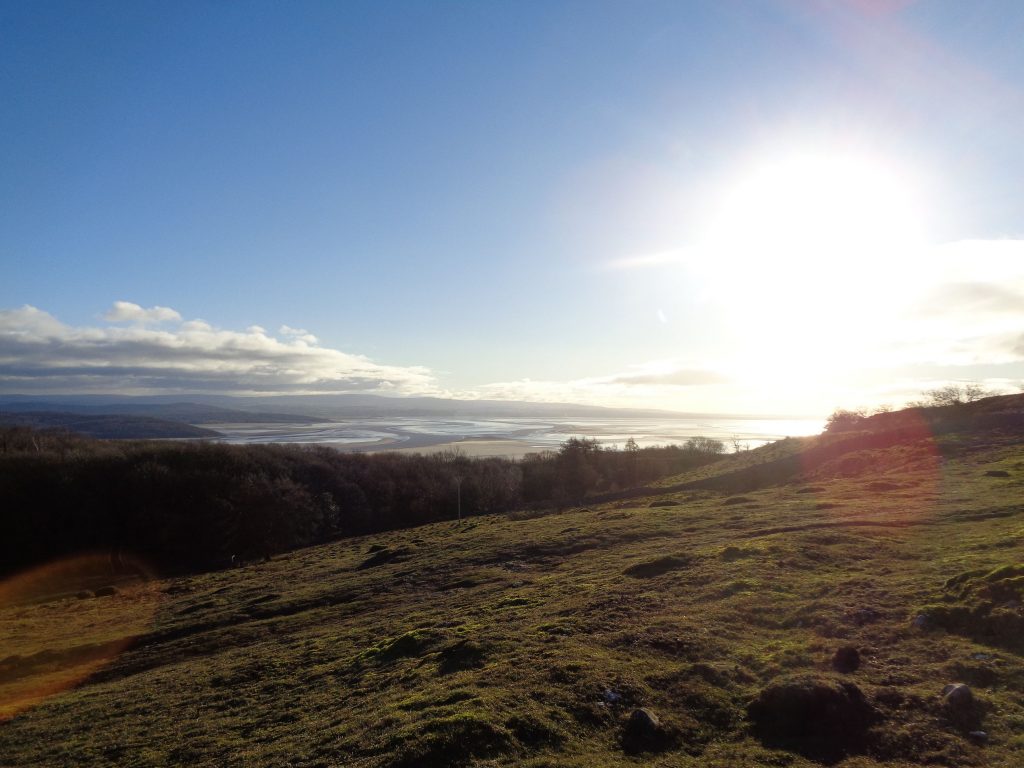 Ascending Hampsfell, Morecambe Bay in the distance, December the 24th, 2020

As it turned out, the wind from the east, especially strong on the top of Hampsfell was icy and Kit was as glad of his hoodie as I was of The Monstrosity. The Monstrosity is so ARRESTINGLY ORANGE that it ought to be voted leader of the Deadbeats. Unfortunately, high visibilty orange coats lack any degree of consciousness – as far as we know . . . but is consciousness a vital requirement to be a leader these days? Consciousness or not, I always take The Monstrosity with us (or me) on walks or cycles except in times of heatwave – those increasingly unpredictable events which now seem liable at any time of year, sometimes followed by snow an hour later, meaning that perhaps, before long, The Monstrosity will never be left behind. In any case, it is always useful for sitting on. 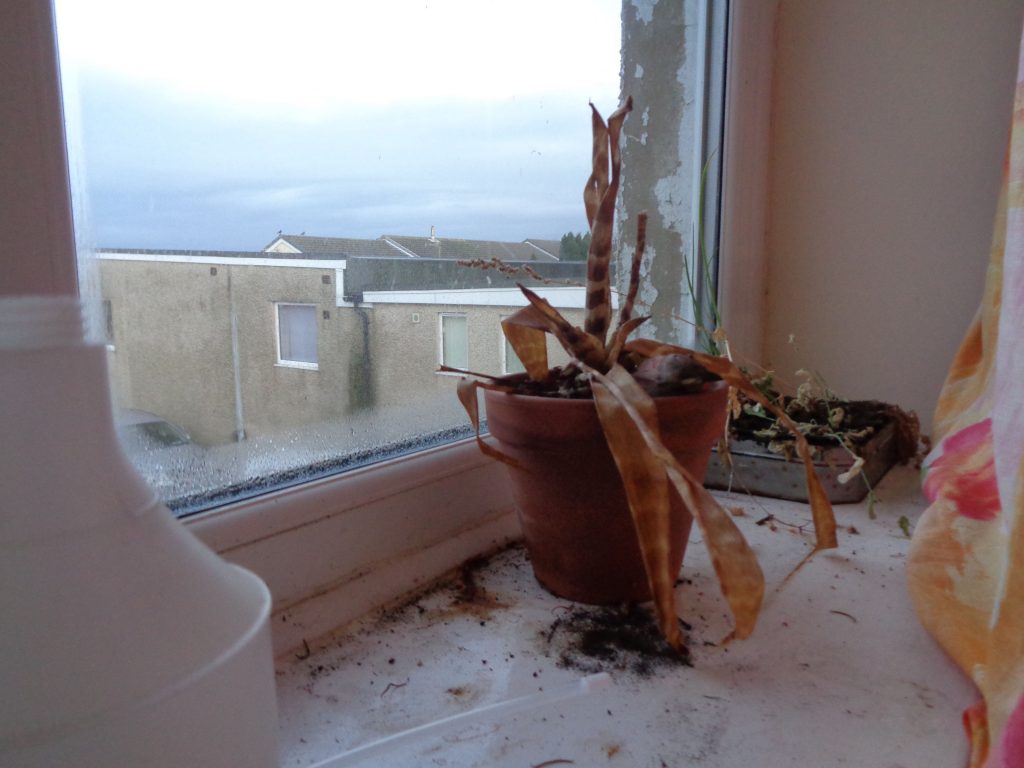 As with the title of this ramble, the moniker ‘deadbeats’ may be more about style than content. On the other hand, given enough rambling, I might stumble on a reason or meaning for both? 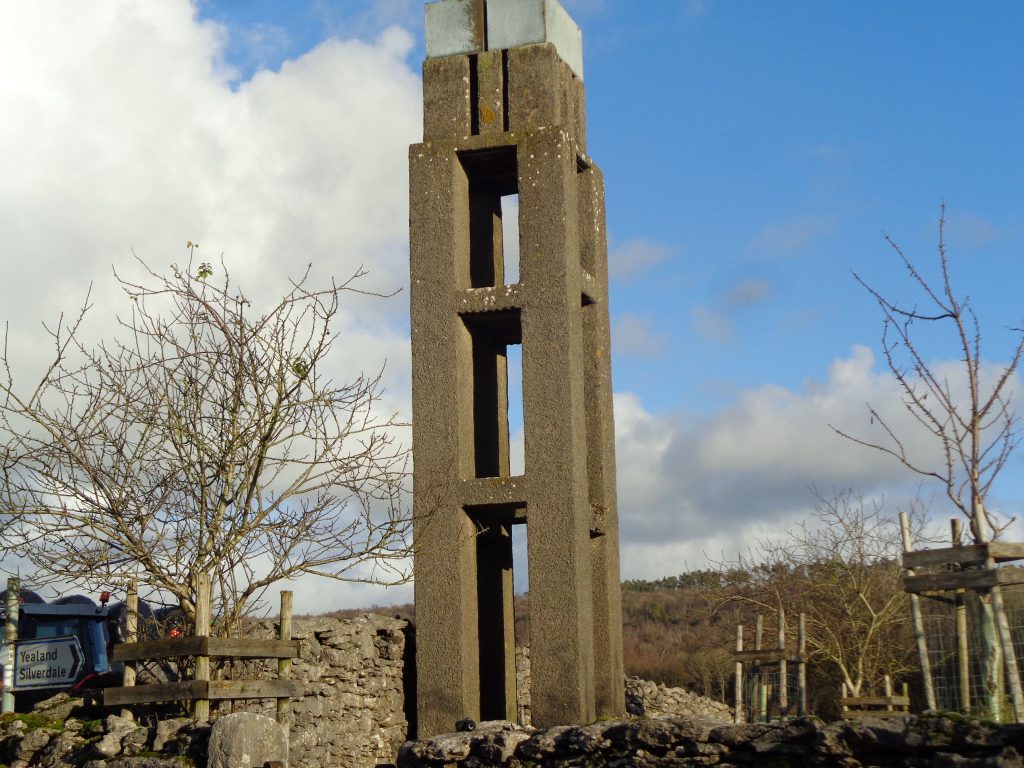 Personally, I was never a devotee of C S Lewis, and despite reading some of the Narnia books to at least one of my children, back in the early 90s[i], barely remember them. But in a mainstream mood, I did enjoy the 1993 film Shadowlands[ii] – at least before it became too tragic. I can’t bear to see the luminous Debra Winger (as Joy Gresham) with her wonderful gravelly voice, become ill. Instead, I fixate on the atmospheric house that Anthony Hopkins (as C S) shares with brother “Warnie”. It feels both suburban and yet in the middle of nowhere . . . and it’s no surprise that rather than at Headington on the edge of Oxford, the house used in the film is in Surrey[iii].  Edward Hardwicke (as “Warnie” Lewis), I shall always see as Doctor Watson to Jeremy Brett’s Holmes . . . hence that superb underlying calm and reassuring handling of pipes. 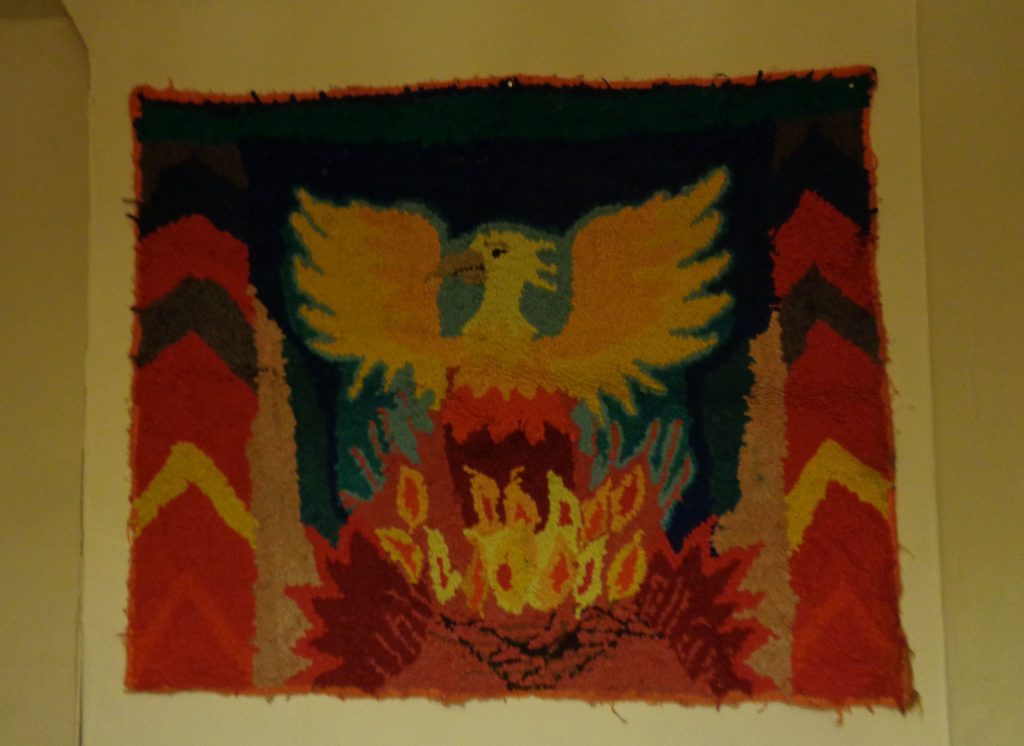 Though it may be obvious that the Lion represents Christ[iv] I’ve never bothered to pursue the idea, subsequently preferring to imagine some strange fundemental overlap with the lion in Van Morrison’s Listen to the Lion[v]; perferring to think of what I remember of the books as harmless, nostalgic, fairy tale rather than Christian allegory with very dubious elements[vi]. As a child (and since) I always preferred Alan Garner – and as the deadbeats and I crossed Hampsfell with its dazzling views over Morecambe Bay to our left and the whole panorama of the Lakeland mountains to our right, it was easy to imagine the landscape becoming one of Garner’s transitional worlds. 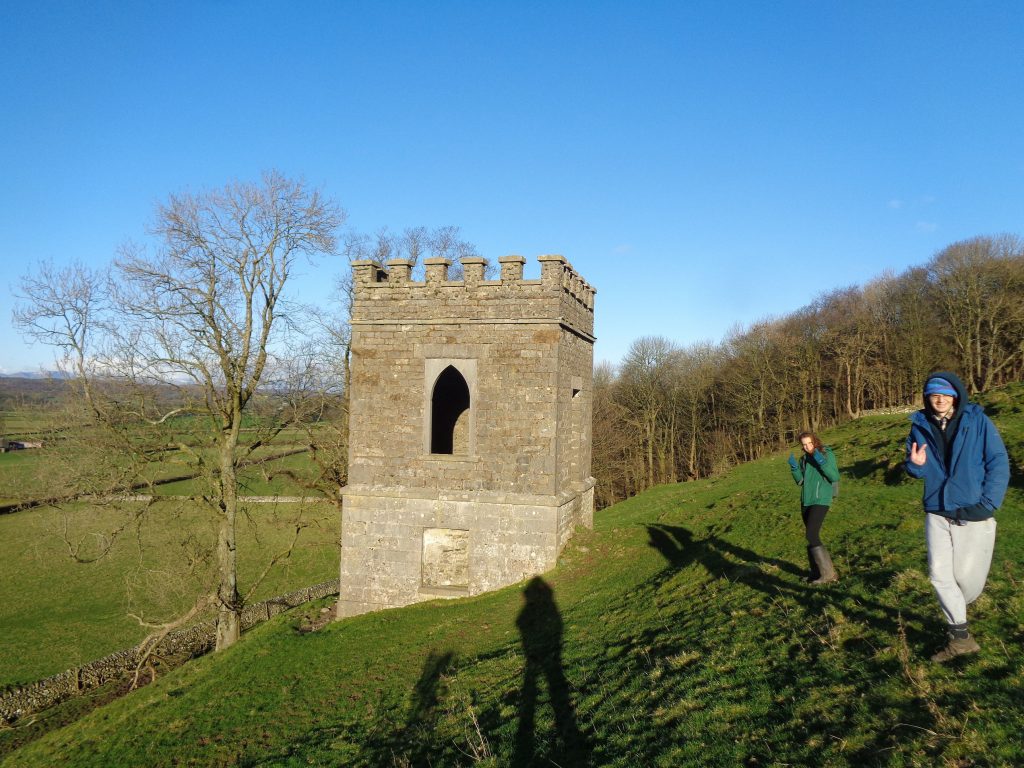 Deflecting around the Hampsfell Hospice tower[vii] we descended towards Aynsome (“aint they Aynsome”, would not be the way bystanders would describe the deadbeats) via Longlands Manor Folly, a place which remains shrounded in mystery – at least to us. I can obtain no information about it at all. Here, where all traces of frost had disappeared despite snow and ice patching the summit of Hempsfell, in the typical manner of youth today, I was abused by the grinning deadbeats. By the way, Longlands is only Longlands, I just added the Manor bit because I like the sound of it. The folly has no name that I’m aware of and may have no connection with Longlands whatsoever. 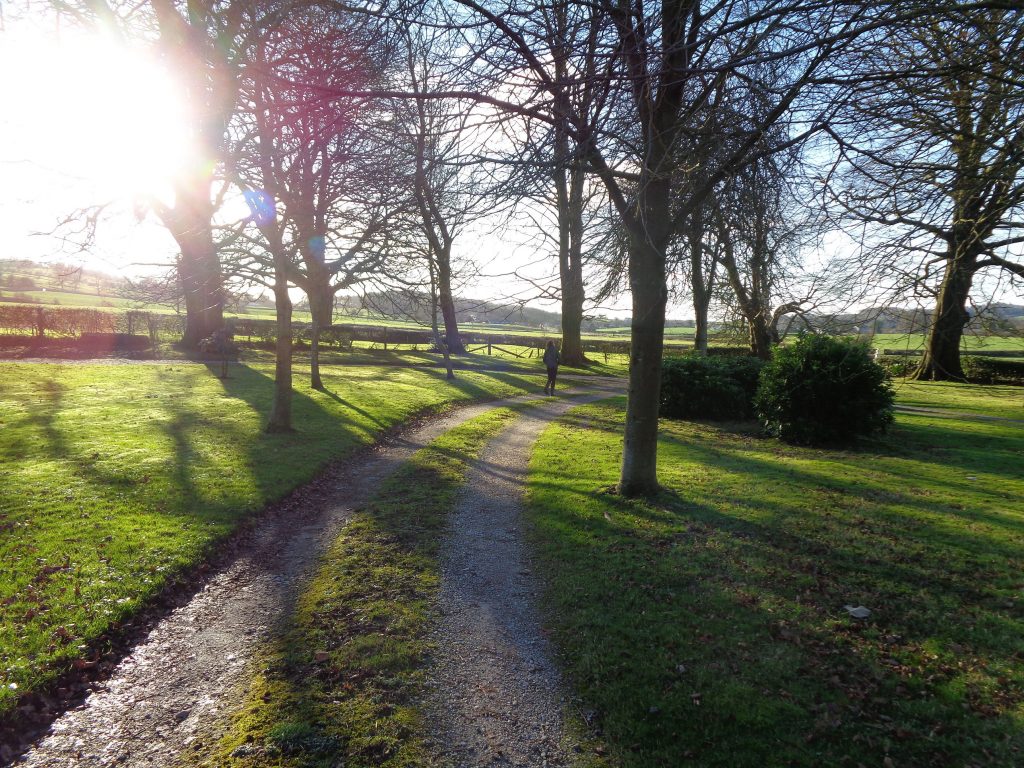 The footpaths from the base of Hempsfell are very varied and appealling. Past walled gardens, through the grounds and along the driveways of mansions, the deadbeats threaded between low sunbeams in the crisp air. Stone clapper bridges crossed glittering streams and passed on into winter woods, open and strewn with rocks. Wardrobes lurked, witches whispered and lions mumbled. Fields and lanes led on to the edge of Cartmel. 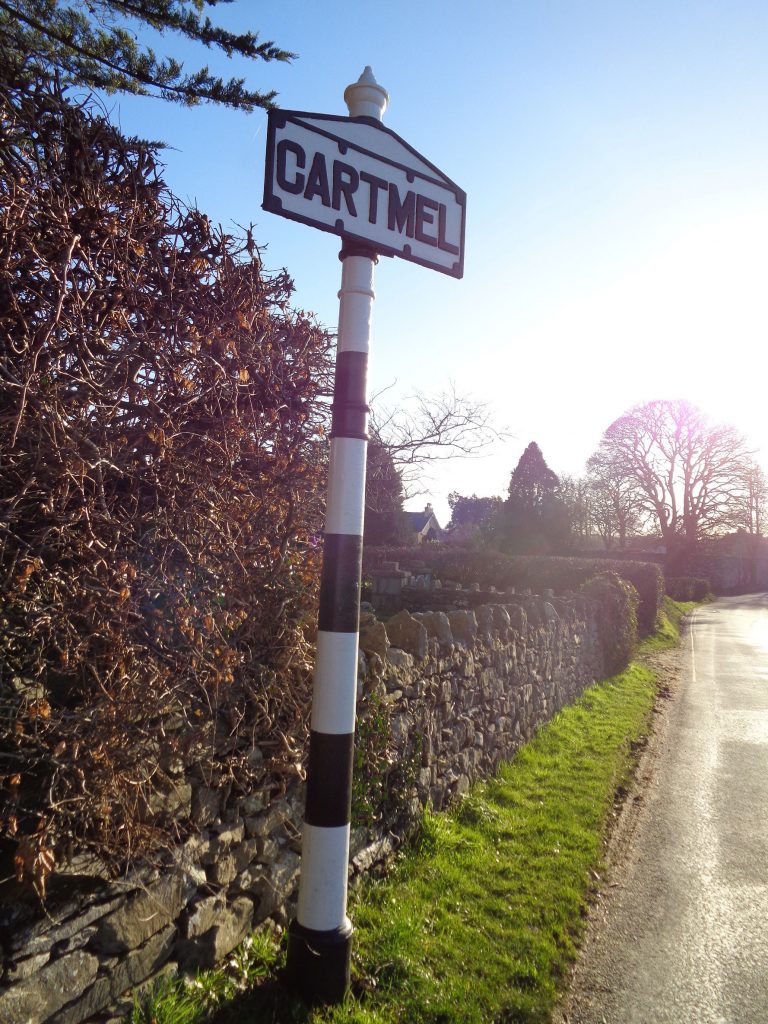 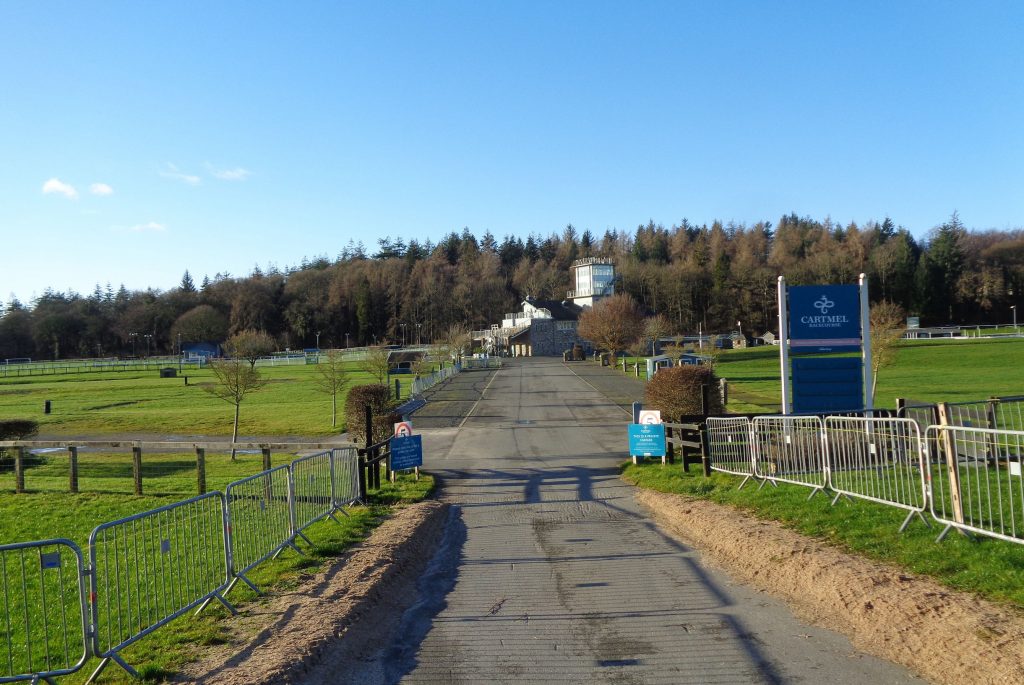 Other paths which traverse the famous local racecourse the deadbeats spurned – since by now they were hungry and harbouring hopes of a pub . . . 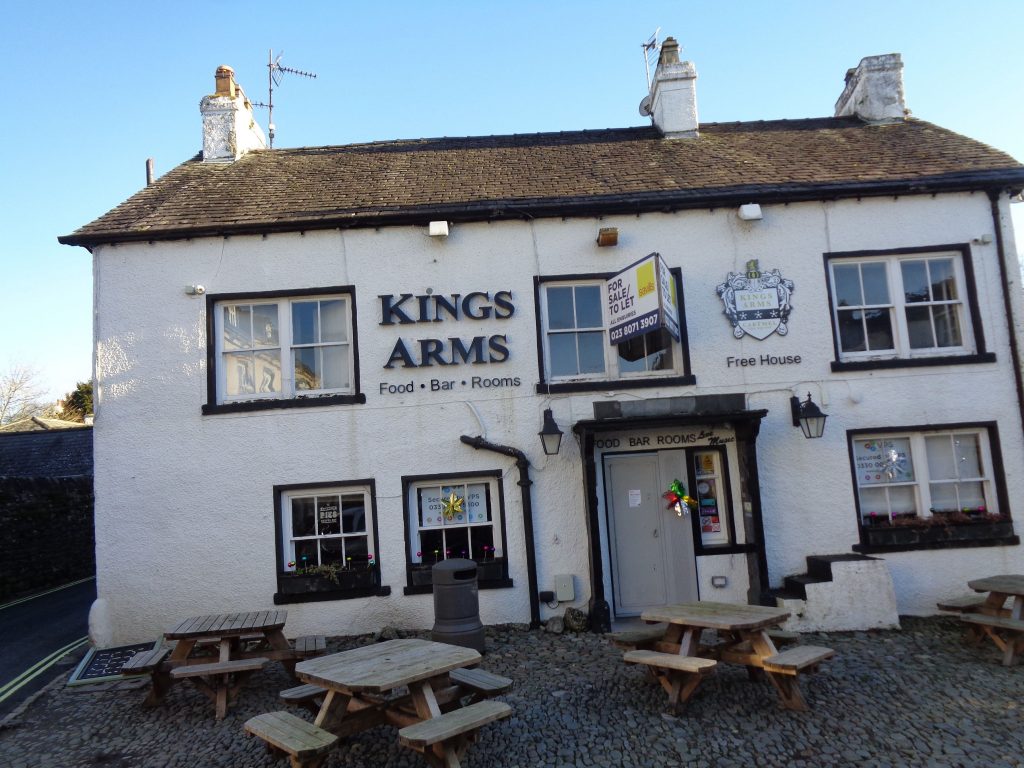 Sadly, both pubs in Cartmel’s central square looked to have closed for good – probably bankrupted by covid. Never mind, anything other than a drink would have cost more than a mane and a broomstick anyway. Other than for the owners of the pubs, not too much was lost. The deadbeats had a back up plan: some cheese, bread and olives (the usual), rocket, watercress and cans of beer. Ensconsed on the perfect bench in the grounds of the priory – in the sun and (almost) out of the wind – all they lacked was warm coffee. The flask was cold, though laced with rum. As always, though they scare away the usual villagers and customers, the deadbeats leave places as they find them. Have no fear, they scorn all litter. 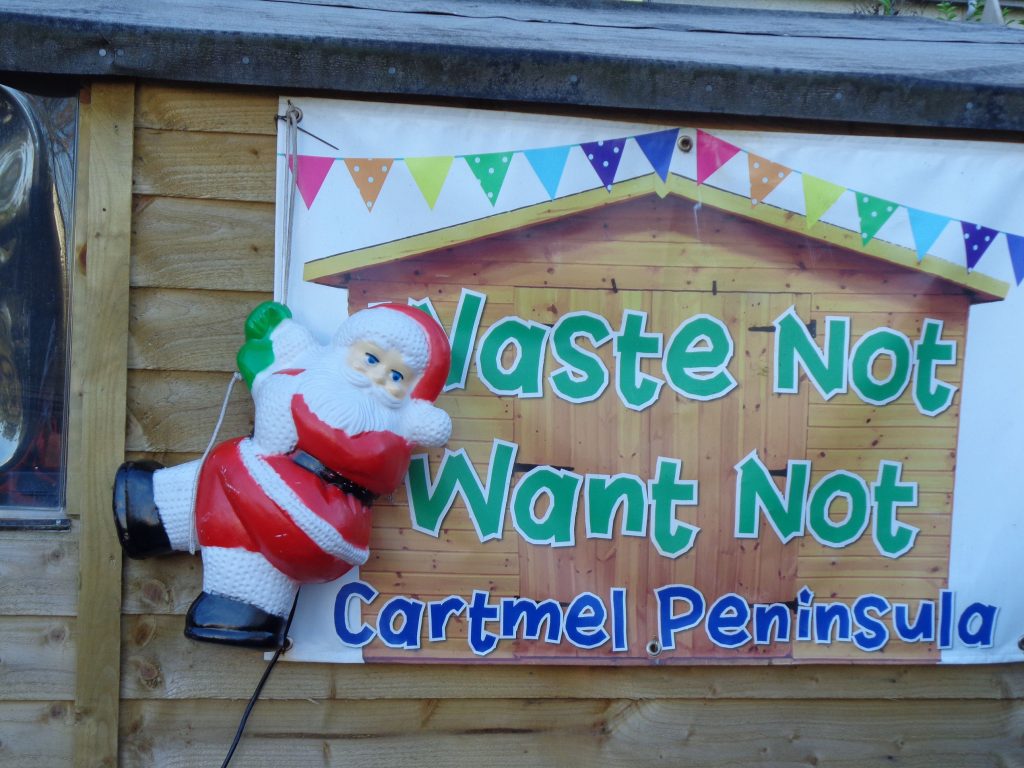 So what of The Breadshed? It’s not really called that. That’s just our name for the Cartmel Peninsula, food share hut – independent, outlying node of a network formed by local people to redistribute food discarded by the big supermarket chains. In Lancashire and Cumbria alone, this network supplies food to 10,000 people every week[viii]. In that sense I could say that The Breadshed forms a gateway to a better world – but the wood it’s made from looks pretty ordinary. No trees grown from apple pips[ix] nor wood of the True Cross ever went into its making. Although bread is one of its primary ingredients, it often fills with all manner of other goods: fruit and vegetables, medicines and teabags, books and films. Even bananas from Banarnia. Since well before the first lockdown (during which its value increased enourmously) the Breadshed has worked in tandem with a pretty effective foodshare scheme operating regionally[x]. I ought to know, as I’ve often become one of its unwitting minor minions. But this is a good thing. Despite the strange gluts I have personally had to consume – unwanted after even our redistribution: whole rounds of Stilton, 12 cartons of natural yoghurt, an entire tray of pomegrantes, which everyone else got tired of peeling and dissecting despite their supposed aphrodsiac qualities . . . this is obviously a good thing. Ascending towards the fell again, we somehow lost the proper footpath and were obliged to take a short cut across the golf course. This very useful stile (pictured above and below) is for golfers to find lost balls on the lower slopes of the fell, not for the convenience of the deadbeats. 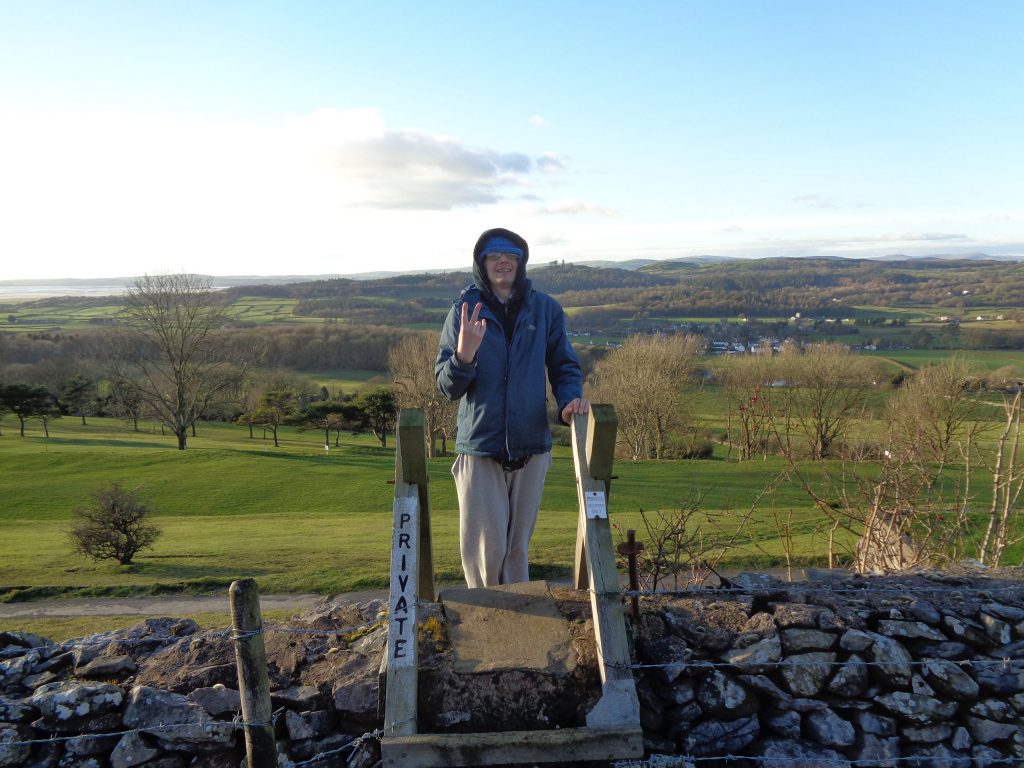 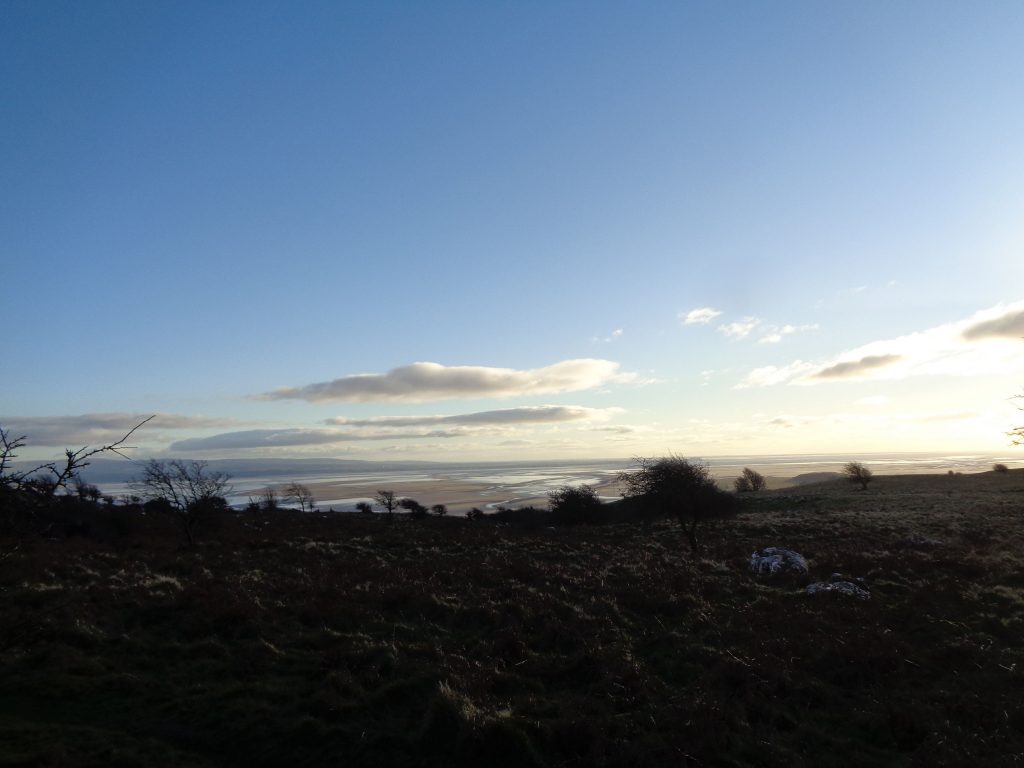 Up on the crest of Hempsfell the wind is strong and freezing again, the light and mood becoming primeval.

[i]  Email from my eldest son, from April 10th 2020 during a period in which my granddaughters were obsessed with the Narnia books and later the 80s/90s BBC adaptations:   “The idea (obvious in a way) that both hope and nostalgia aspire to timelessness has also been much on my mind recently because of Narnia.” . . . “so, I’ve re-read most of the books in the last few months and last week came across a whole chapter in The Silver Chair which is a riff on Plato, which I unsurprisingly didn’t notice as a child.”

[vi] www.theguardian.com/uk/2002/jun/03/gender.hayfestival2002  Unlike the “right-wing columnist” who attacked Philip Pullman as “the most dangerous author in Britain” and “semi-satanic”, Pullman was known in our house as Poptarts (after the sickly-sweet breakfast things) for the sugar-coating of his early works perhaps, and also, unfairly, for the irritating children’s voices which shrilled from various audiobooks at varying times of the day.

View all posts by →
This entry was posted on 8 May, 2021 in homepage. Bookmark the permalink.