The Masqued Brawl (an essay) 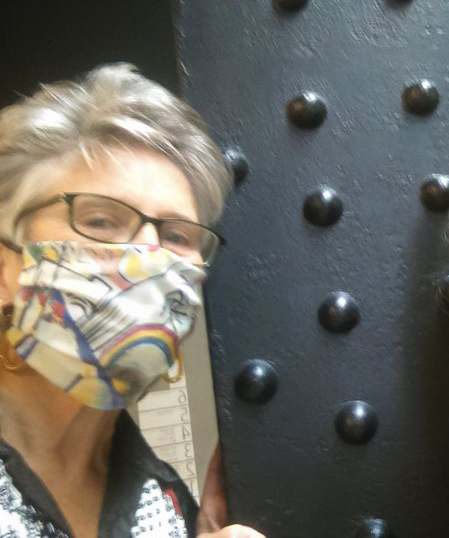 I’m out and about like a vole from its hole: big trains, little trains, tubes and now buses if not too crowded. I note that most people wear masks. Some don’t, are usually younger: youths but not kids. As an ex-special needs teacher, with a fair amount of experience of being with youth in public (think Joyce Grenfell on speed) I’m psychologically equipped to ask ‘where is your mask?’  Or do that zipped gesture across my own mouth area, with a hunch of my shoulders while eyeballing.   Some fumble for the mask in their pocket or raise the one hanging round their neck.  A few don’t have one at all and either raise their tea shirt around their mouth or are sullenly silent, a classic reaction to shame as the antagonists in these wee public dramas.   Social pressure is important, and can restore some sense of society at a time when, paradoxically, other human beings can be a source of danger.  Comforting too, that we all feel connected for the common good.   When I challenge the fully naked face, I sense gratitude from others in the moving cage – as if no one else dare do it.   Why? Inhibition?  Risking their own shame?  Physical attack?  Yet when I do it there are winks, wide-eyed nods, gentle squints or a thumbs up from Josephine public.  But all eyes are on me, not the transgressor.   I’m normally shy and don’t like attention, but in my mask, feel brave and accountable.  I am anonymous, unrecognisable: Someone Else, and truth to tell, quite enjoying it.  The heroine of the Jubilee Line between West Hampstead and Kilburn, the swashbuckler of the 16 bus at Brondesbury, the masked crusader of the Overground at Kensal Rise.   I cut quite a dash in my punkish grey hair, green framed specs, atop my mask with a print of Kandinsky’s painting Cossacks (the Tate Modern shop didn’t have, The Scream by Edvard Munch – or the Munch by Edward Scream as Barry Humphries put it).

Me – can you put your mask on?

Me – (clicking my fingers) Coronavirus is transmitted in a flash.

Young man remains silent, the rest of bus eyeballing him. I get off before he does.

Me – Guys, could you put your masks on?

Me – (gesturing) Look, this is just like a train carriage. It’s enclosed.

Me – Thanks guys, you’ve just forced an old woman out into the rain. They are clearly ashamed but would not back down in front of one another. I mind their behaviour very much, but not sipping tea from my flask in the rain, marinating in self-righteousness, and yes, my relative youth.

I admire myself for these actions. It is as if, masked, I’m someone else. But I don’t like myself.  Yesterday’s incident gave pause: two young men, one without a mask, the other with one slung around his neck, sitting together on the tube.  I say down the length of the carriage, like some fucking vigilante ‘could you wear masks, please?’  The maskless one tries to stare me down, his mouth grim. The rest of the carriage is clearly on my side, so he pulls his T-shirt around his mouth. His friend leaves his around his neck. I challenge him, it stays around his neck and his friend’s T-shirt slips back down.  BACK DOWN.  The state of backing down is such a common trope in trash culture, we don’t like to, in case of perceived wussery.  The men are hanging on to dignity through a glittering defiance. The others in the carriage shrug, some with a look in their eyes – at least you tried dear.   I’m cross, and decide (decide, right? this is not spontaneous) to bang on their window when I get off at Kilburn.  I do. They jump.  And then I feel ashamed. Why?

The window thump was a gratuitous, aggressive, counterproductive action, and less likely to change their behaviour.  I think about this, and by the time I’ve reached the bottom of the escalator realise that my aggression had come from a locked down place, stored away like a squirrel stores nuts for the winter.  It wasn’t for the public good, but for me to vent further anger.  I realised that, if not masked I wouldn’t have done it, and how aggression can be delivered from an emboldening uniform.  That self-concealing garments can turn you into someone else, releasing the nasties, (or the gods)  like a genie rubbed up the wrong way. Masks also liberate.  Masks at the Venice carnival have turned on many an uptight tourist.  Masks in Greek and Japanese culture ramp up mystery and intrigue. The significance of the masked model is strong in my own developing novel. I remember Doctor Kildare’s eyes over his mask in the operating theatre dimpling at a nurse, whose own eyes were heavily made up.  (This was the early 1960s, the patient always survived and we assume the nurse got laid).

Would I do that again? Less likely now that I’ve hauled it into consciousness. Big deal I hear some of you think – she only banged on a bleeding window, and quite right too.   But amplify that useless action many times and you have war.  We need to haul stuff out of our unconscious, like fishes on slabs in these difficult times. Those men were shamed enough, and an overload might turn them into different people. See Jacqueline Rose’s superb essay on shame and politics in her collection On Not Being Able to Sleep.   It was as if I’d started a brawl, but with a sheet of reinforced glass between us, and a train about to move off.  No contest.  But I’ll still be the public transport protector of the tribe down Kilburn way, oh yes, and although mouth smiles are invisible, eyes are not and they have a language of their own.  Will we feel face-nude and vulnerable when these makes are off?  I expect so.  Will I still be brave? I hope so.  The eyes have it. Aye.

View all posts by Jan →
This entry was posted on 12 September, 2020 in homepage and tagged Jan Woolf, JoWonder. Bookmark the permalink.