The Monsanto/Bayer Transgenic Knot is Tied!

Don’t Miss the Mono Satanic Wedding of the Year… 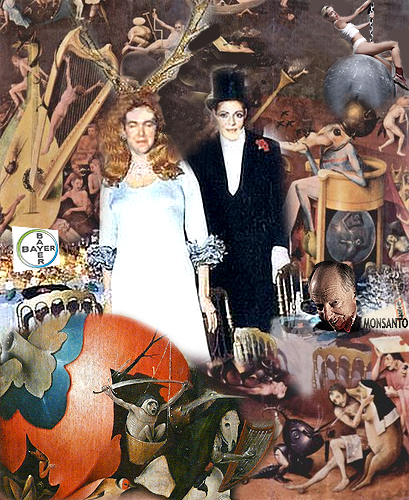 Oh happy day! Two entities that are clearly a near perfect match, are to be joined
together in hellish madrimony.

On the 21st March, 2018, after due consideration, The EU Monopolies and Murders Commission sanctioned their marriage – for the princely sum of just $666 billion dollars. What a joyous day for the people, plants and animals of planet Earth!

The wedding, between these two infamous same-sex corporates, is to be celebrated with a laboratory prepared Roundup Ready cocktail, which invited guests will be able to savor from specially commissioned asbestos goblets, each bearing the Saturnian insignia’s of the corporate couple.

Cyber waiters, wearing only a fixed smile and an Aspirin, will bring to the table a large bowl of Agent Orange consomme, as black nanotech confetti rains down on the happy couple.

Genetically modified mosquitoes in a rich glyphosate sauce is to follow; garnished with Amflora GM potatoes and further spiced with Monsanto’s very own Flaver Saver tomato dressing. I am reliably informed, that the  eagerly awaited desert will be an organophosphate Golden Rice pudding, served in genetically engineered pig skin bowls with the words ‘New World Order’ inscribed on the outer rims.

A gentle ‘digestivo’ of microwave warmed  Coca Cola will also be served, sweetened by Monsanto’s original saccharin chemical formula, to help settle any over inflated stomachs.

Lastly, for anyone wanting something as simple as a nice glass of water, the Carkill corporation has most generously offered to donate free bottles of its flouride enriched tap water, for this occasion.

After their sumptuous dinner, guests will be entertained by Lady Bla Bla, Mad Onna and Miley Citrus, a cyborgian trans-gender act famous for its ’emotion free’ performances and costumes entirely made from reconstituted GM chicken thighs. What a grand spectacle!

Tickets will be available for a special public event to follow later in the week at the Head Quarters of The European Commission. Prices will start at $10,000 a head, but there will be a limited number of front row seats available at $1,000,000 each. Those fortunate enough to purchase these seats will get a free ‘MonBay’ T shirt and a bottle of synthetic bovine growth hormone (bovine samatotrophin), enhanced semi skimmed ultra heat treated milk. Book early, as seats are expected to sell fast.

Also available at this event, owing to the generosity of the host corporations, will be special gift vouchers for original 1925 examples of products made using polychlorinated biphenyls (PCB’s), so helpful in plasticating internal organs, but unfortunately banned in the 1990’s after too many people got the irrational notion that they were not doing anyone, or anything, any good.

Finally, the happy couple will leave for their honeymoon so as to consummate their common lust for power. In this case, in a delightfully un-restored Transylvanian castle by invitation of Count Roth-Soros, a great grand son of the much vaunted Count Dracula.  There they will spend a quiet weekend with close fiends and New World Order vampires, planning the next major take-over.

What will it be? Speculation is rife that it is likely to be the World, as nothing else has quite the cache.

Postscript: “When the power of love overcomes the love of power, the world will know peace” Jimi Hendrix

He is President of the International Coalition to Protect the Polish Countryside. Julian is the author of two acclaimed titles: Changing Course for Life and In Defense of Life, which can be purchased by visiting www.julianrose.info .

View all posts by Julian →
This entry was posted on 28 March, 2018 in homepage and tagged Julian Rose. Bookmark the permalink.