THE ONE IN THE TEN 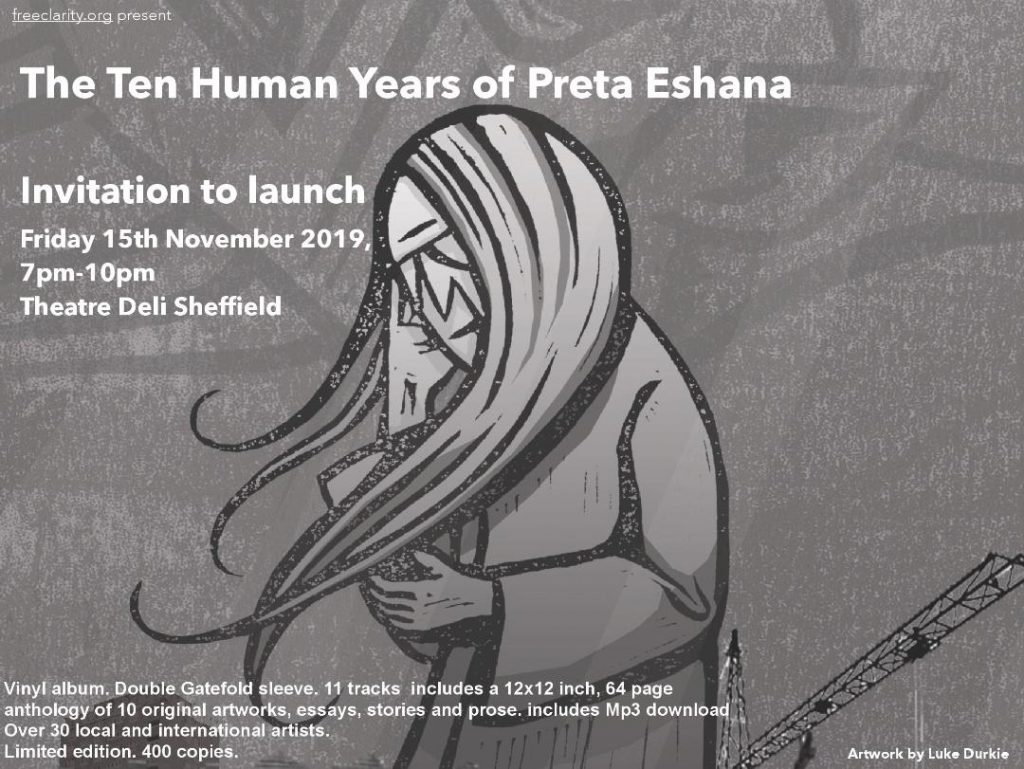 At a time when the hand no longer knows what to treasure,

A new story comes, shining fresh light through the kingdom

That for mankind has lain buried: and so a free clarity outlines

For those who are lost the heart’s goal.

Has written the tale of Preta Eshana, a female hungry spirit

Granted access to our world. In her timely passage, one day

Represents ten years of existence, through which she journeys,

Observing the sadness of woman and man, boy and girl.

In these cynical days, the story supports Givnan’s passion,

Along with his soul fed compassion, felt and evident on each page.

For his beautiful story allows an equivalent world of expression,

Among fellow writers, musicians and artists,

Setting down a template or bible for a burgeoning spirit age.

The project is Sheffield based with profits designed

To help the vulnerable of that city. As each act fills and feeds them,

They may seek comfort elsewhere than the drink

That has borne them away on dark streets’ submerged rivers,

Along which the drowning in bedding that road meet their brink.

And so the sweet spirit comes to observe and to soothe them;

Her path provides inspiration to the artists Givnan invites.

They become part of Free Clarity, as you might release the Djinn

From the bottle, in order to find your own tonic,

To refresh not the throat but fear’s night.

And a hand woven volume will contain the stories and thoughts

And addiction, as they capture reflections and echoes and create

The kind of art that defends.

In the prologue that Kate Brennan reads to this impassioned story,

Descends,probing the light and the wayward glance of each mirror,

Preta questions perception as a guiding light seeks an end.

A peel of beats ruptures through as the world we know

A signal call guiding her through the shape and form of a cosmos,

Down to earth’s darkness with its need for a star’s remedy.

Shrieking synths soar to claim her, and yet these shouts stretch the senses

To the point of enraptured despair and sleep’s calm.

As the imagined state relocates the troubled horde living nightmare,

The entrance  of her presence will, like the music here, serve as balm.

In which sister spirits align against dark to shine bright.

These small sibings heal under a scrape of cloud and sharp moonglow,

To represent bodies like Preta forming themselves, to seal night.

In Year Two Preta wakes and takes on the demands of the morning.

As the human receives obligation, so Preta’s awareness gathers.

And percussive shimmer that sets thoughts in motion and images

Of doors, opening. A flurry of electronic notes like a bird cloud duly rises,

As intoxication of spirit lends uplift even with the pressures of day closing in.

Bearing under the labour of a representative shard of wood.

As concision of sound and image supports the progress

And path towards good.

Preta’s spiritual self, in Year Three, leads her to the poor

And the desperate. She attaches herself to  a young man,

Reminding her of her son. Through her presence he learns

That the fear of the ruling hand shapes his shadow.

In allowing his darkness there is no grace or grain to be won.

As a face houses spirit and the soundtrack music suitably

Captivates. A folkish guitar sets the tale for Ray Hearne’s

Money ballad, as representative of the evil across which

As Preta Eshana grows tarnished. In living among us man’s anger

Stains from dark cloud, easily. These she disperses to fight

Against the prevailing  forces that tame us as Frances Rowles’

Wooden puppet Tianamen Squares up to a tank.

Hands poised in prayer, the firing gun blasphemes at her,

The obscenity of the image as starting here as old news,

As skies glisten, and a guitar refrain resounds, singing

Across  a handful of notes, wordless blues.   Soon so many colours

Align within this sacred project. Soul itself seeks dimension

And finds it at once with each mark. Preta Eshana becomes

Through each sign, song and story the means for all progress

To establish itself on God’s chart. After the Flood’s string sparked

Song ushers in the fifth year and stage of the journey;

But those surrounding her are not subject to the spectre she shapes:

We’re obscene. Unused to the pure, despondency grows within her,

With invisibility once more claiming our hopelessness becomes hers.

After the Flood’s music enchants, capturing disillusion and sadness,

As the theme builds and motors it is driving her through our curse.

And yet there is a rallying cry to be heard in the motion; a resolve

In Year Six she walks across land and oceans. Examining us in all classes

So that society’s school can be warned. Earthly comforts do not still

And the sheen like mask that seals gaze. Humans turned on themselves

And turned in too, each soul folded, immune to the message

Sent from the murdered heart or old page. We need not be as we are.

There is still so much to accomplish. But only if we lift the visors

And blinkers too, to see all. Tom Collister’s metronomic string

And strike shows how fast time is running. Preta Eshana is moving

To the sound of a long submerged call. One that would see us all rise

As the splinters of tune achieve status. One that Preta Eshana is stirring

In the passing airs, miles and sky.  As yet we can’t see, but this is what

This story wakens:  the long neglected but sacred, the continual need

To ask why. Juliet Ellis’ photograph of a New  York Cemetary,

What Year Seven contains, the realisation that man only seeks

To be happy and that while the trapped suffer, they nevertheless

Seeks the blessed.  This restores Preta’s grace, marred as she was

By the human and the renewed vigour features in Snappertronics’

Beat storm; as the bass skitters through and distorted horn features,

The voice of John Cage exhorts us to see the excellent day attain form.

Implied by the photo shows that even in death there is scope.

As one looks at this book and listens to the album, the reader stroke pilgrim

In Year Eight complements Preta’s mission. She sees that a new story

Is needed to map out a path to free men. For mankind is not, and has never

Been kind to each other, as those of all types, creeds and genders

The Touch represents this need for connection. The warmth of Campbell’s

Song shows that shelter remains in our province if could just see and care.

Everything  remains possible, as Eshana’s guiding spirit now guides us,

Influencing discreetly, as if turning an invisible wheel in the air.

In Year Nine she is clear on what is required. Offered the chance to stay

She refuses as mankind’s lesson is clear. Even mankind sees it too,

Freedom and Clarity have been outlined. But in our own refusal

To assume that new shape Hell stays near. Eshana opts to return

To the Spirit realm that has birthed her, in order to assist the starred

Essence of life itself in its tasks. Asa Bennett’s soul smeared prayer assists

Elevation. ‘If I should plant a tiny seed of love in the garden of your heart’

Of dried stars. A host of new planets arise as the strings bear us skyward,

As possible as new flowers breaking through ruined earth or held snow.

It is also a portal stared at from below. An attractive escape,

Or spiritual sketch for the Sci-Fi, leading Preta Eshana

In congress with the beatific space we can’t know.

It is then that we see just what has been accomplished

As in Year Ten Eshana as spirit rightfully housed spreads her worth.

She plants these new seeds, implied and heard  in this album

Of soul, souls and conscience contained within heart and hearth.

Displayed on each page and in the stories that follow,

We have seen how the journey of knowledge and truth becomes

Law. On the book’s final page there is a collaboration of spirit,

The one in ten gambit that in playing its hand finds the pure.

The accomplishment stuns under the gentle Givnan’s vision.

His Liverpool tones show all cities and all realms are ours, far and wide.

We can ascend and deliver. Everything still grows inside.

The project completes with the writer’s stories.

Each writer accomplished, From wavelength to page

And from screen. Some are recollections, some tales,

From sweet parables, to reflection.

As witnessed first and second hand by our guide.

Each are extensions of mind, As if Givnan had sown his own seeds

Of being for both these and new writers

To freshly populate a gold time.

Freedom, and thus hope, is a proxy for the imprisoned flame in us all.

David Edwards espouses Year Eight in a near Manifesto,

Charting the ways in which stories can clearly emulate new truth’s call.

As Kate Brennan details the affecting bonds with her life.

Within this compassion and signal stroke, she is wife.

As all Angels are, either to God or the Human. Be they male

Asa Bennett documises her song, in fact and proceedure

As Luda Kadampa re-examines the journey,

As if essaying the profound.

Lucy Hopkins ‘glowbugs’ lecturing us on our learning

The poet Lemn Sissay concludes, urging us to be

‘Light on the shadow’

This is how we Eshana.

And this is how love attacks.

Not with a wound,

But with a truth.

The lesson is teaching

How the colours of the heart

View all posts by David →
This entry was posted on 2 November, 2019 in homepage and tagged David Erdos, preta eshana. Bookmark the permalink.

One Response to THE ONE IN THE TEN