The Pandorem: A Place For The Soul 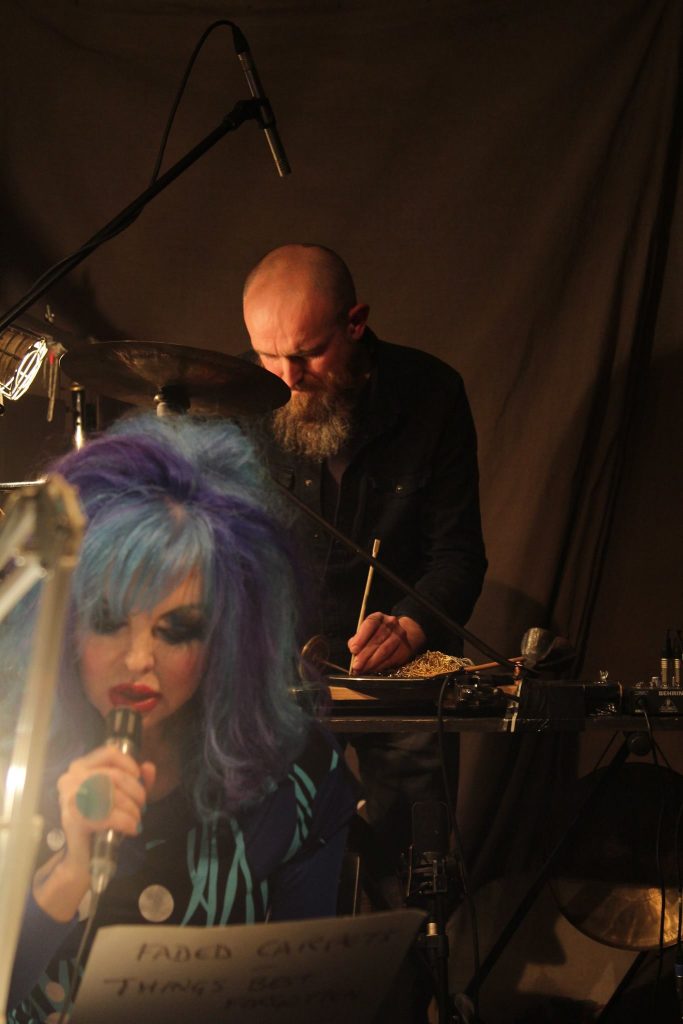 As Kubla Khan did for Xanadu, so Unicazurn have done for Dalston. Cafe Oto, the area’s prime location for the performance of new music of all denominations proved the perfect host for David Knight and Stephen Thrower’s mix of ambient industrial electronica, as they premiered elements and improvisations relating to their new album Transpandorem (Touch, 2017) in the flesh and on the strings, pads and keys. 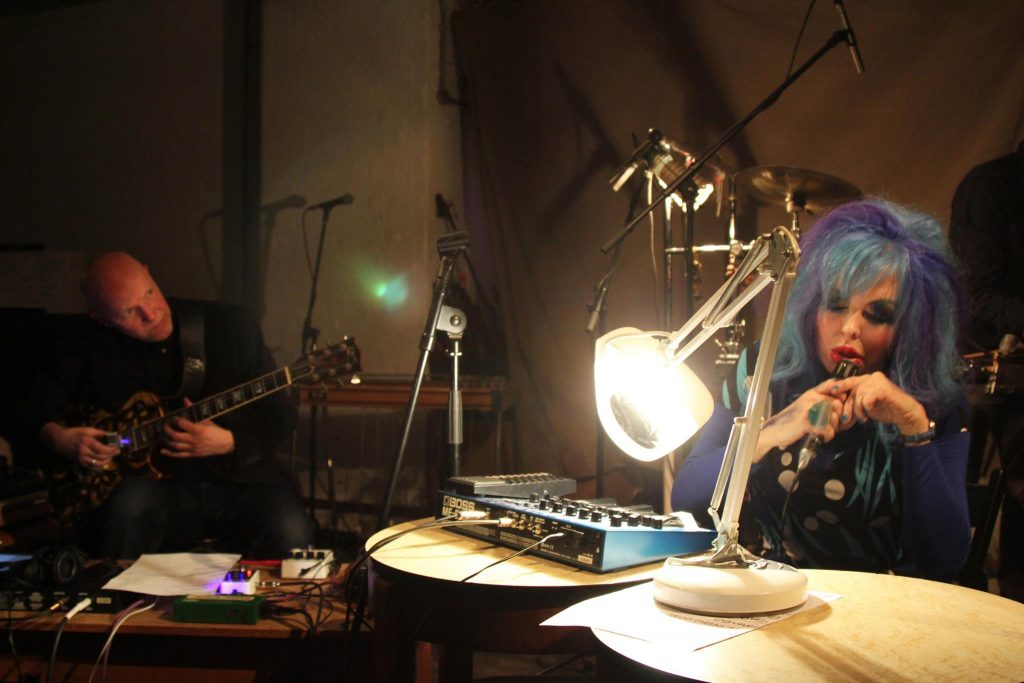 Accompanied by legendary singer, experimental musician and performance artist Danielle Dax (whose first public performance in ten years, this was) on incantatory calls and whispered vocals and David J. Smith on percussion, brushes, cutlery and other tinctures of pressure and air, Knight and Thrower turned the upper reaches of Hackney into a place of shamanic transference. Playing to a full capacity of 150, the spirit-power-quartet of Unicazurn ably proved that the experimental and avant garde avenues of expression lead not to seclusion but to a sense of reformation. While some practitioners of the bleep, beat and feedback school keep the innocent and unschooled at bay (much like some of their prog and serialist antecedents did), Soundscapers like Knight, Thrower, Thomas Koner, David Sylvian, Christian Fennesz and Simon Fisher Turner are constantly seeking what sound and the inherent vision manifested by that sound, can do. Films of the mind, or aural spells are what are conjured through these musical explorations, joining and re-emphasising all of the artistic forms. Indeed, music like this does what acting should do, chiefly, provide it’s own aesthetic and theory, rather than just relying on the surface elements of presentation and ill-conceived interpretation. 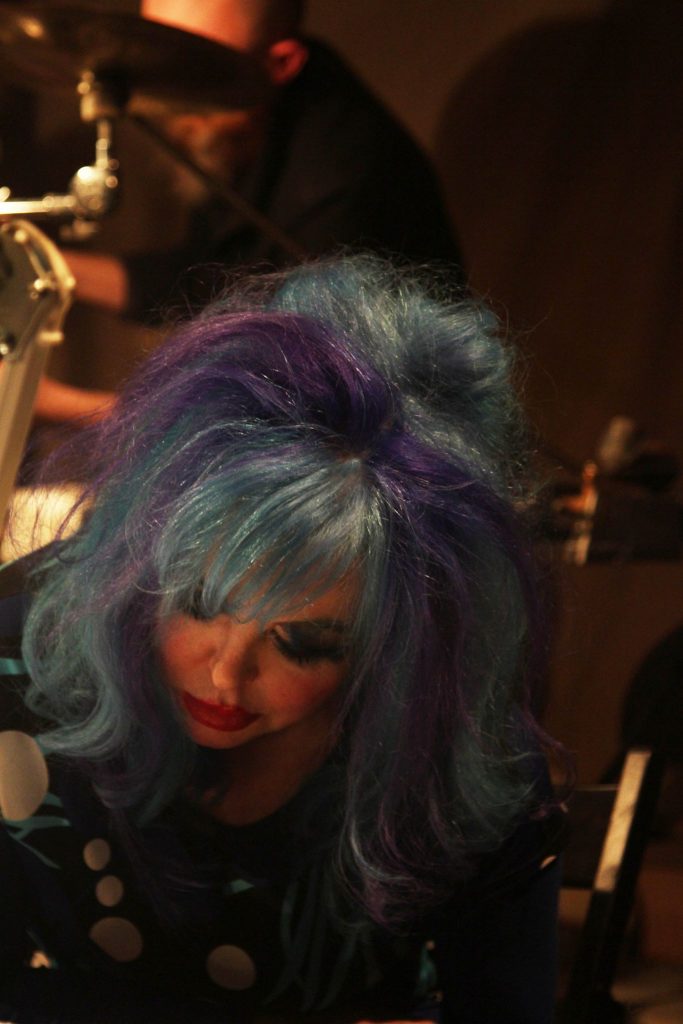 The opening piece arrived on slides of grating power and tectonic like aural shifts as Knight sliced guitar strings with a butter knife and Thrower moved from ipad to organ, while Smith and Dax completed the spaces with echoes of voice hand managed ephemera. ‘The Weevils in the tea..’ surfaced as a phrase I hung onto as the piece motored and shimmered along. The general electricity in the room, sensed and literal, was personified by Dax’s blue and purple hair, mascara and cherry red lips. This aligned with the vibrant stares and connections between the musicians as they summoned the numerous spirits of void. The informed improvisations that led to this and the other compositions created thoroughly believable, almost graspable worlds, another task of drama, if not to the point of touch then certainly to the edge of acceptability. This form of resonance transforms performances like this into encounters on an affecting instinctive and dammit – it must be said, spiritual level. We are transported, if not in a grand and lasting way, then certainly on a moment by moment basis, marking each phrase, mood or intonation and checking in with both those around us and more importantly within ourselves, about how each one of them speaks to and finds relevance in and around us.

Out of the miasma of aural intention, revelatory and resonant deep organ chords assumed a majesty that lifted the air. The effect was and is a coming together of elements, a fusing, or baking of the soul that thanks to the heat and energy in the room rises and colours one’s thought. 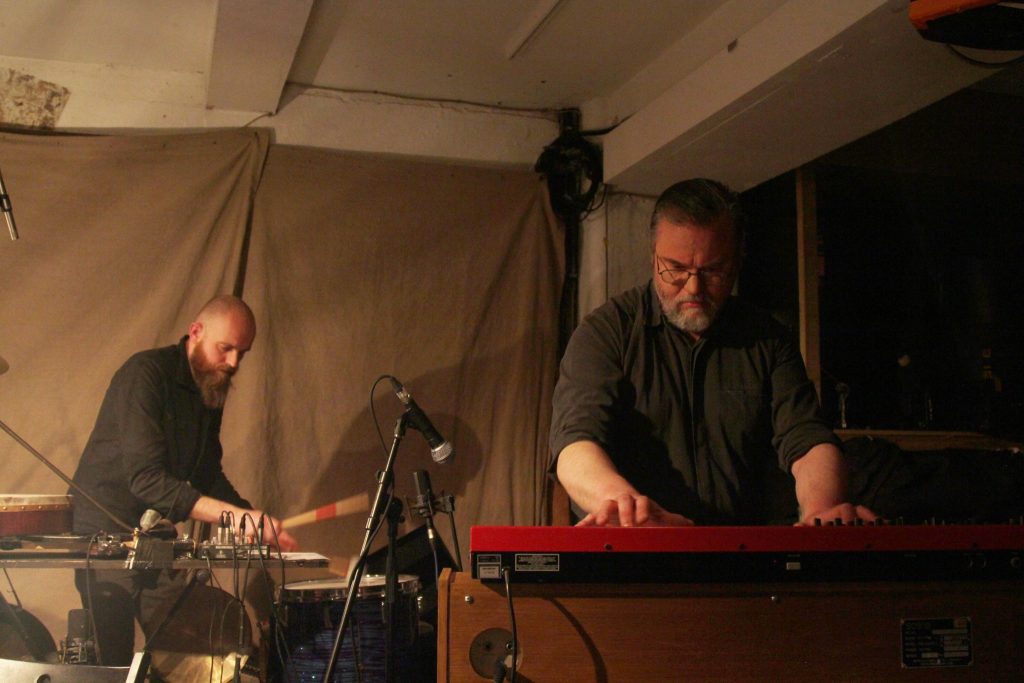 Watching others listen is a unique experience and one that more than anything else separate to that special event that occurs between hearts and genitals, connects individuals. How we experience art on any level creates art, defines it. It is where art can be heard, felt, seen and shared. And the understanding that comes from a true and sensitive response provides the very beat of friendship. We can only perhaps locate a love for our fellow men and women across the bridge of taste and while those bridges vary enormously in terms of length, width and what they actually cover, I was struck by how closely others followed and allowed the sounds and musics played on this evening to transport each member of the audience towards their own inner pandorems.

That distinction has just occurred to me as I attempt to summon ways to describe and contain this live performance. It in no way captures the meaning of the album title, which remains Unicazurn’s special province, and yet as a found phrase onto which I have imposed an interpretation it seems to allude to or define that place within us that both receives and is changed by music as it works its magic on us. 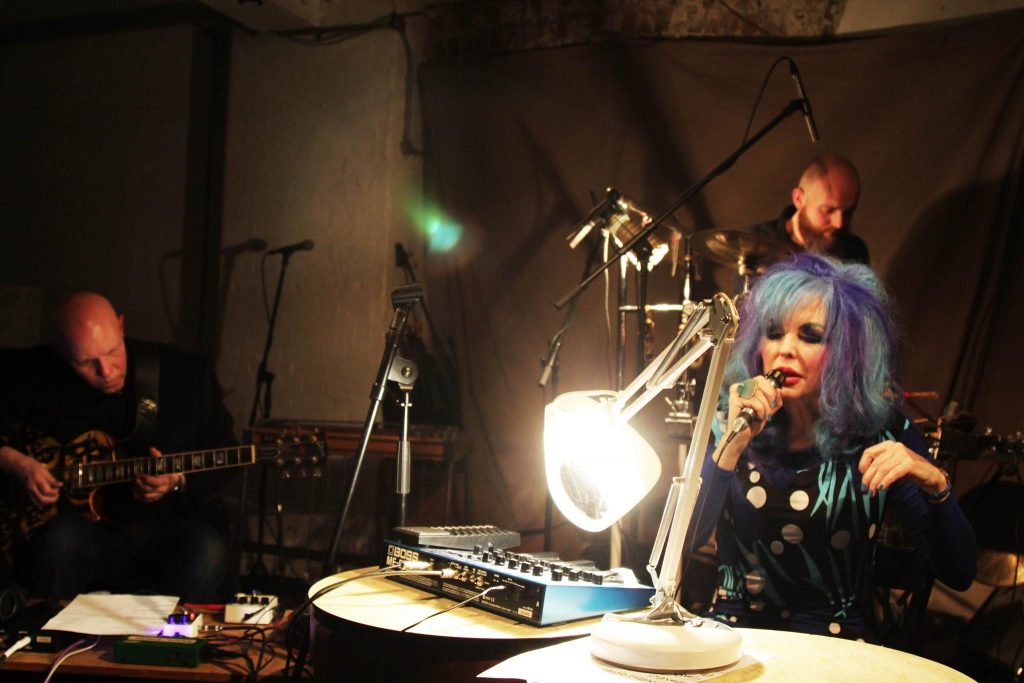 Improvisation in music is the most thrilling sort. As a celestial feel claimed the room, Thrower picked up his clarinet and somehow contained the scale of what had been happening within the slender body of that instrument. The industrial through the acoustic. Electronica summoned by application of mouth. David J. Smith charted his progress on cymbal and stick while Knight capered alongside and underneath providing a mixture of controlled chaos and fugal sympathy on his trusted electric to bring the piece to a significant and satisfying conclusion after 24 minutes.

I hereby change tense as I quote from my notebook, written while listening:

The second piece summons the arrival of the kind of Pink Floyd you always wanted but never quite received as an insistent churning figure is ‘fripped’ into transcendence by Knight’s masterly chimes on guitar. Moments of dischord threaten but are then folded back into submission as the guitar voice pierces through the Mo Tucker like beat of Smith’s drum. Here is a velvet coloured underground in the purest sense, as freed from conventional song structure, while at the same time somehow echoing it, we caper along music’s rim.

The pieces that comprise Transpandorem and these live experiments, improvisations and variations strike me as the progeny and evolution of ambient classics such as Fripp and Eno’s No Pussy Footing album and Peter Hammill at the peak of his Sonix and Unsung work. They do not copy them but seek to take the model further, so that one encounters this music in a new way. Despite the occassional harshness of texture, it invites us to participate. It is music you meet and converse with, creating the friendship of collaboration rather than leisure.

Reverberated shimmers settle around us or find the places to directly affect us, as if injected…

This allowed us to move while sitting and experiencing, something that put me in mind of Bauhaus’ Peter Murphy in the old Maxell cassette tape advert of the early 1980’s as the winds of change and time ripped, roared and snagged themselves on his impressive cheekbones. Brevity aside;

..organ led resolutions subsume all with electric star shots as a place of calm is attained. Within this settling, one hears other distant orchestras, both earthly and alien and in my head the mind seemed to flutter and fold on developing tangents of real…

Audiences are in essence, passive. As are consumers. Only those on the hunt for a bargain are active, desperate as they are for a quick fix or recognisable form of sustenance. Here, the music sought to fill its spectators with a sense of self and place. As I watched and listened I fancied I could hear the very act of listening itself and it occurred to me that concerts or recitals –  which is what this more resembled –  were and are opportunities to understand that listening is an act of consummation, both with the source of the sound and the feelings or things it begets. If we can forget where we are when we arrived to encounter it, then there has been a true and lasting renewal. We can experience in a new way what we have now become, through it. Art changes us every time that we see it, affecting us slightly degree by degree, piece by piece. This is why songs and albums remain with us over a lifetime, as do books and poems, films, paintings, plays. To do this with sounds seems to me the highest achievement. And tonight’s transportation went from four people’s evocation of that we only sense into a graspable thing for us all. There was ceremony here and celebration. There was study, reflection and real activity too. 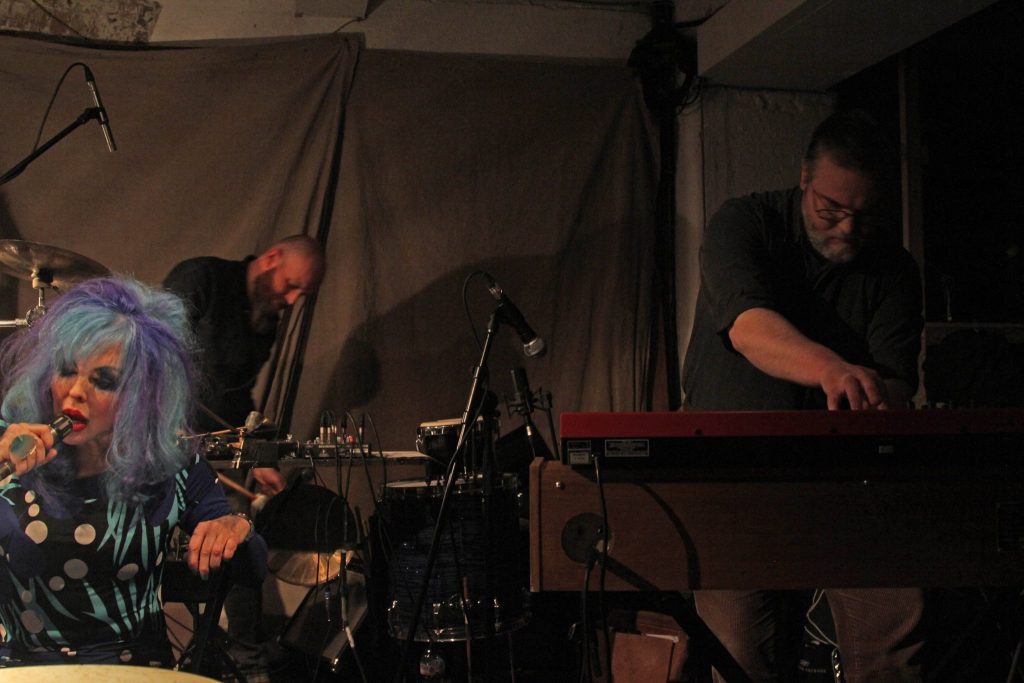 The crowd’s enthusiastic responses at each turn of events led to an encore of contained and then freed clarinet voicings, turntable like churn and ascending guitar wall, full of combined and soaring phrases. I watched Smith’s extended shadow on the back curtain nodding towards the darkness like a Hassidic jew at the wailing wall and felt the religious combine with the spiritual and dare I say it, demonic. Outside, Dalston was bopping to its own frenetic rhythm. But inside this small tooth like building in its city sectioned jawline, the resounding mouth had been turned inside out.

The Pandorem is found. On that night in a low East London room, one hundred and fifty souls moved towards it, each one of them eager to locate their own starting ground.

One Response to The Pandorem: A Place For The Soul