THE PATH THE HEART MAKES 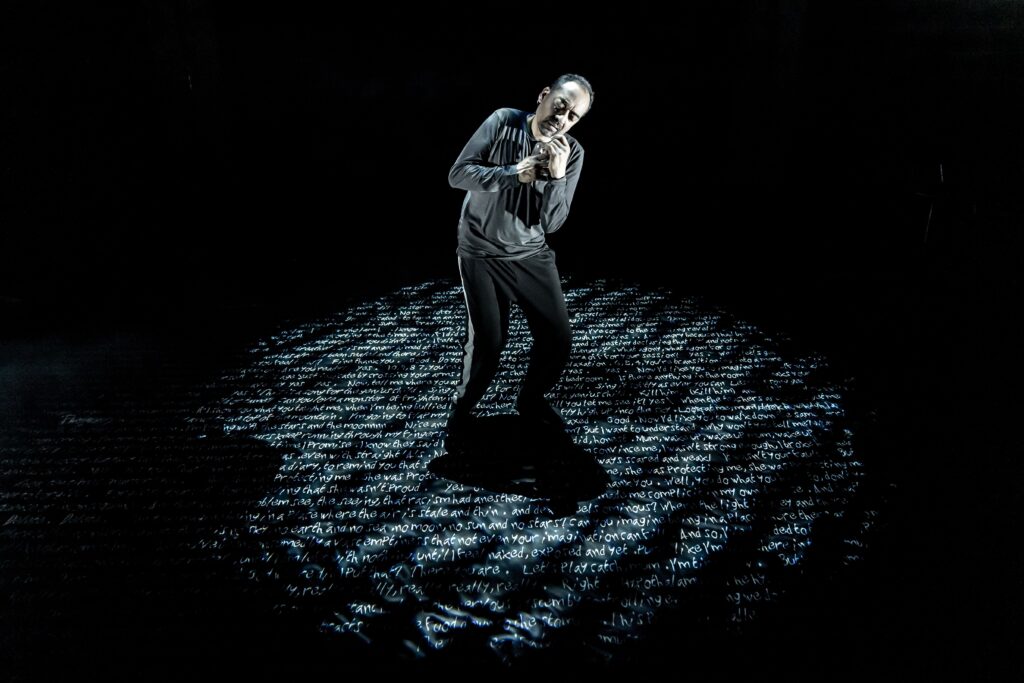 On Crying in the Wildnerness’ CONUNDRUM
(The Maria Theatre, Young Vic, London 2022)

By exploding the myth, a map can be now made from madness
As Crying in the Wilderness find the mainland as their new production,
Conundrum returns to reframe the Young Vic. Triumphantly,
It would seem; stunning audiences through the glare
Of Anthony Ofoegbu’s performance, as fear stung Fidel Robinson,

Whose life story is peeled back before us to seal and to heal
The mind sick. Writer Director Paul Anthony Morris’ Theatre
Of the Soul sets the aim for those who are are watching,
By fusing text with movement, ambient sound, featured light
He dares us to dream the same dream and to scream

In sympathy with Ofoegbu – the most committed of actors –
As they take on the struggles of a fragmented black boy
Lost in an oppressivewhirl wind of white. This is unlike any show
So far seen, as said by a Young Vic theatre member:
And yet to me, its a poem of consciousness and harmed grace.

In which each struggle faced reveals a different and deeper
Dimension,  as Fidel moves from sorting through long atticed boxes
To the secrets that shape innerspace. Report cards from school
Return him at once to the pressure, where as the only black child
He had to be ‘ten times smarter than anyone else in the class.

This desire to please and to prove himself wounds him,
As his mastery of each moment is soon reduced and  then ruined
By a prejudicial world’s neutral mask. Where words end  – frequently,
As Fidel fails to describe what affronts him – composer Florian Bel’s
Sonics save him, as memory becomes choreographed.  Shane Shambhu

Leads the limbs that Ofoegbu follow; swimming through air
And the phrases that the young boy found before all left, or worse,
Laughed. Or derided, denied and subjugated, a person of promise
So set adrift by time’s fall, that he charts the Carotid Canal
Until it becomes craft and mantra, with the Hypothalamus like an island

From which he must send rescue calls. ‘I KNOW WHO I AM’ is the phrase
That both repeats and unravels, as Fidel is attended and confronted
By Filip Krenus’ Doctored dare. This Doctor may not even be real
And yet he represents the repression against which Fidel struggles
As he suffers in a Spotlight, or is groped by gobos, as the phrase

‘No More Lofty Ideas’ comes to haunt him; another imploring call
For our care.  The phrase bleeds through the floor and then moves
To the back, as Jack Weir’s ingenious lighting design equivocates
With Polankski’s Repulsion; but instead of hands coming
Through walls, its the visions that Fidel fears and finds which disturb.

His body contorts, as he climbs the precarious steps to survival;
Dancing with despair he encounters the horrors and harm
Without words. As the Wilderness cry seeks new forms,
We have to dance through this dreaming in order to wake up
And reorder the world we don’t want. Fidel has been crushed,

From both the weight within and that on him and yet,
What we witness is a butterfly birth through floor font.
Sean Cavanagh’s set design puts the performance text there
Before us; to show that in some ways we’re all written,
As each of us stain our seared page. With Fidel’s life in boxes beside

And  each prop strewn or stacked there for access, the map made
Is a marvel that Ofoegbu artfully defines: words as cage. And yet
Fidel frees himself through the elegance of this performer;
A beautiful actor, able to inform and express
What black consciousness truly is, certainly within this

Western context, as the assumptions made  are what trapped him,
Before his descent is delivered by a final phonecall’s finger press.
Fidel’s father finally restores his son’s sense of self and his searching,
But the time and life taken to get to that stage shapes the theme.
Where terror’s terrain and the madness mark still surround him;

For Fidel its a shield against the racist world’s weapons, which,
As the script says,  ‘is an illness,’ as much as it is evil’s scheme.
Robinson/Ofoegbu  as Chaos’ Crusoe? Perhaps.
Or Fidel/Anthony as an Angel? These are both, in the end,
Earthly creatures, aspiring to survive and to save.  As all will be

Watching this: Morris’ seminal story. Boy becomes bird.
Flying over,  he sees the colours of mind and of mayhem
And of all the gifts some God gave. This is a wonderful show.
It is a piece of art, with scant laughter. But then we do not laugh
At a painting or during a symphony’s fugue and fall.

This is an epic song of self, extending its reach into poems,
Which will rhyme now with reason; watch, rise, align. Love him.
For with each sainted moment and with each move
Through the maze,

CRYING IN THE WILDERNESS’ CONUNDRUM: AN INTIMATE TALE OF SELF DISCOVERY, LIBERATION AND BLISS PLAYS IN THE MARIA THEATRE, YOUNG VIC, LONDON FROM 14TH JANUARY TO 4TH FEBRUARY 2022

View all posts by David →
This entry was posted on 22 January, 2022 in homepage. Bookmark the permalink.