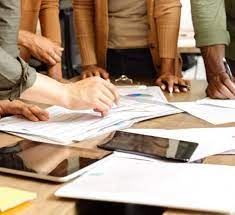 An online meeting was needed to get the project up and running. Ellie, the coordinator, sent out an invite offering a number of dates. Omar, George, Fiona, Liam and Sascha responded within a few days, but after a week Judith and Ben still hadn’t indicated which dates they were available. Ellie only worked two half-days a week and by the time the non-responders had filled in the poll, and she had looked at the results, most of the dates originally proposed had passed. On the two remaining days most of the seven team members were unavailable. Another poll was sent out with fresh dates. This time response times were better but no date could be found on which more than four of the seven were available. This was partly because Omar and Liam, who would have been available for an earlier meeting, were now away for several weeks. A third attempt at finding a date eventually resulted in a meeting being fixed when six of the team were free. Judith, the only person not available that day, agreed to be briefed after the meeting. Ellie sent out joining instructions two days ahead and was online well before the start time. A quarter of an hour into the meeting only Omar, George and Sascha had logged in. Ben was having internet problems, and Fiona was nursing a sick two year old. Liam’s whereabouts were unknown. Those on the call agreed that the issues the project was trying to address were important and that a fresh attempt should be made to convene a meeting.

Tweet
This entry was posted on 27 November, 2021 in homepage and tagged Simon Collings. Bookmark the permalink.