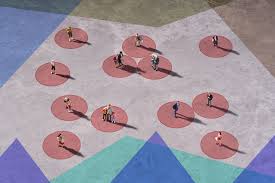 What are these tiers anyway? Tiers of joy? Tiers for plenty?
Tiers or tears in the fabric of what we know and do not know
To be true? Tears in the real, stadium tiers made for football
In which the male love for Captains and some of the female
Love stains the news? No, these decisions are domes to contain
The prone public. The lack of definition astounds me despite
The border lines tightly sketched, which bind one level of tier
To the next, which is either more restricted, or, freer,
And making yet more confusion through travel, while we
Trainee Agoraphobics fail to move further, grieving
For ourselves while we’re living, corpses who also become
The bereft. Many have stopped watching the briefs
That the buffoon beast bluffs so blithely, so these
Sudden strictures surprised me as England Venn Diagrams
Into tiny sectors of health after Liverpool’s strained
Example, in which some of the suffering streets in that city
Could not even afford what was planned. With the soldiers
Guns in one hand and a testing kit in another, we will see
Other cities primed and rehearsed for the cosh that we
Will be ushered under in time by enforced law or injection,
Already the hopes have been furloughed as no quick fix
Solves that cough. Meanwhile Cummings went. That he had
Support at all chills me further. Meantime the other draught
Pieces are hustled and cast into play. Unpriti stands peeled,
But remains with that sneer that needs fire to wipe it away;
Tears are falling of frustration and grief every day. It will not
Be as you think. Cry for the particular time that begat you,
As it may well be forgotten, not by you, but by forces
That could still crack you like eggs. Battery humans, perhaps.
Will they behave, wanting Christmas? The hype of that season
Feels more exposed than before, feels like dregs. Whitty,
A man, with a strange, bloodless smile now advises:
Do not hug or kiss your Grandmother, for fear of making
You a Judas of sorts to her Christ. Remain in your Tiers
And with your tears as well, you kept baby. Meet your six.
Sex your partners but for those without, there’s just vice.
That remains in the home in a pornography of both mind
And body, as the sense of unreality widens and we all hold
Our breath. You can go into shops. You can mix. So where
And what is contagion? The attempt at control; The Coronic?
Or the Covidian chorus of death? No-one knows. No-one sees.
The line bends. Needles glisten. A celebritised vaccine: the answer
To our prayers, or the start – of new kinds of tiers in which bodies
Lay stacked with ambitions. Watch this space. Souls slip through it.
Meanwhile, they are cutting new zones through our hearts.
David Erdos November 27th 2020
,
Tweet

View all posts by David →
This entry was posted on 28 November, 2020 in homepage and tagged David Erdos. Bookmark the permalink.