Time to talk about the British republic 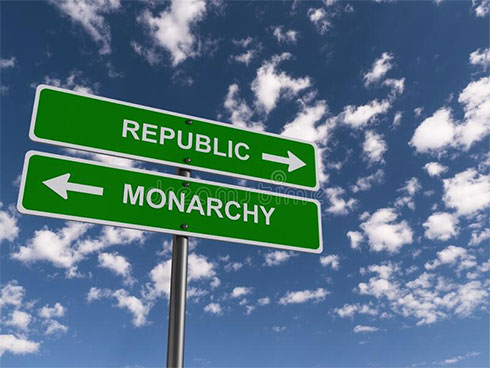 In a post Brexit time of national uncertainty and economic struggle, it’s perhaps logical that the death of the grandmother of the nation should be the cause of mass sorrow. That said, a long weekend just spent in London made me aware of the sharp contrast between the tourists and devotees in the centre and the workaday folks going about their business in the periphery. That Queen Elizabeth II worked hard in her role as head of state is not for me in doubt. That over 70 years were spent in this inherited position is a cause for personal admiration and respect. However it should also be a reason to step back from the emotional fray and ask why? That the appointed ‘national’ broadcast media are going into expected overdrive to mobilise mass mourning is not surprising. However that shouldn’t prevent the more reflective among us from doing what the prime ministers of Jamaica and Antigua & Barbuda have just announced they will be doing, and having a national debate about whether their countries will become republics or not. Perhaps it’s indecent to suggest such a debate in Britain at a time when our former head of state hasn’t even been interred in the national imagining let alone Charles III formally crowned. But surely it’s precisely at this time that we should stop and wonder what maintaining the monarchy, or at least maintaining it as is, is good for?

The much vaunted “neutrality” and claimed ‘non political’ nature of Windsor family rule will not only be tested by our new King’s attachment to a range of deeply political causes and opinions, but politics very much goes with the Windsor turf, as it were. You can’t be head of the Commonwealth and be sworn to uphold the Protestant faith and not be political. To think otherwise is to dwell in a soft, pink, cotton notion of the world forged in story books and childhood delusion. The king, like the late Queen, is a deeply political figure, as any head of state would be.

The question is whether we’re happy to maintain a political system, and yes, ‘regime, that having a monarch whose government uses royal (prerogative) powers, ensures? For those quirky enough to have watched the more than hour long ceremony on Saturday morning live from the Privy Council, an appreciation of all that is undemocratic, indeed archaic, about our political system was in full, open and transparent view. It was as if Penny Mourdant had won the premiership and Liz Truss had been kicked straight upstairs before even passing Go as PM.

As Leader of the House of Commons, Penny Mourdant led the business of the great political and clerical good who constitute this former Executive body. However her announcement of the Privy Council’s decisions underpinning the uncontested ‘election’ of Charles as king was straight from Medieval Britain. The Union of the kingdoms of England and Scotland was a constant reference point as was much Monty Pythonesque referencing of the Great Seal and of interim Seals of some kind. The newly minted monarch himself grew visibly more irritated by the arcane absurdity of all that he had to voice ‘Agreed’ to. However for him, his Consort, and his Heir, I suspect this was all so much tiresome theatre, as no doubt it would seem to any still watching members of the public.

However the substance of what was on display was an assertion of power by unaccountable decree from a body, the Privy Council, whose official purpose is to “counsel” the monarch but is in practise more about the underpinning of the royal prerogative powers that all governments exercise by reference to the crown and not to the sovereignty of the people. Charles’ stated affirmation of his office, that he is the sovereign, made clear where powers still lies in Britain. It may be his “constitutional” understanding that God and the elected government, in that order, should guide him in the performance of his ‘duties’, but our unwritten constitution gives “his” government a welter of unaccountable royal powers to exercise on his behalf.

Should we care? Well, declaring war, signing international treaties of any kind, issuing executive decisions such as orders in council without proper parliamentary scrutiny, are all the exercise of royal prerogative powers. They quite literally have nothing to do with claimed electoral mandates turned into parliamentary legislation. A country that has supposedly ’taken back control’ doesn’t seem to care that as an electorate they have little control and that their sovereignty is only partly honoured in name and largely ignored in practise.

The great symbol of British parliamentary democracy is not the office of prime minister but the speaker of the House of Commons, the

person who, ceremonially speaking at the ‘State Opening of Parliament’, bars the monarch’s entry to the legislative chamber via Black Rod. Speaker Hoyle though was a mere attendee at the Privy Council on Saturday, lending his democratic imprimatur to the throughly undemocratic proceedings.

Perhaps this is all liberal elitist claptrap, point scoring by a member of the over educated classes when ordinary folk just want a decent day’s pay for a decent day’s work, and affordable, heatable, housing to live in. But if the masses aren’t actually determining who governs them and how, and if their elected representative don’t hold sovereignty on their behalf, then what hope is there that popular needs and desires can be met?

Arguably the last time a collective programme of mass need was addressed by an elected UK government was in the latter 1940s when the second war in two and a bit decades had brought an establishment and party political consensus that things could never be the same again. Democracy’s role was merely to chose those in the red corner as the ones who should try to administer it. No Labour government has in practise done anything to challenge the monarchical constitutional settlement other than to partially limit the power and membership of that residue of royal favour, the unelected House of Lords. The maintenance of the monarchy shouldn’t however be a matter of left V right. It should be a matter of democracy V unaccountable power. If Scotland goes independent then it’s likely to replicate Windsor’s prerogative powers over an elected Holyrood.

We are told that the late Queen was so shielded from the mucky and constitutionally inappropriate business of politics that in 1975 her Governor General in Australia turfed out an elected Australian Labour prime minister in cahoots with the then Prince of Wales and the Queen’s private secretary. These were royal powers used secretly to get through a political impasse that should have been Australia’s political business, but was actually the business of the UK monarch’s own Governor General. The British Labour Government of the day was seemingly equally constitutionally “shielded” from what the British royal house was up to.

Britain plainly needs a head of state to at least arbitrate when there’s such a political impasse at home. It was feared that the Queen couldn’t be shielded from doing that if there had been no prospect of a UK parliamentary majority ‘to get Brexit done’. The prospect, pre PM Johnson, beckoned of the Queen having to appoint a national (coalition) government to get through the political morass. Some would argue that it’s surely better that such a political arbiter be the head of the house of Windsor than perhaps an archly party political figure appointed as a figurehead president. (Few serious republicans in Britain want a presidential political system ala the USA.).

This is not just a matter of what kind of head of state do we want when the parliamentary arithmetic is bothersome. It’s very much more than that. It’s about who do we think should rule us, whether as head of state or in terms of the laws, orders and executive decrees that are currently issued on the basis of monarchical power? Should these be our laws, argued over by our representatives, or the prerogative of a royal house that, as witnessed on Saturday, elects itself?

Posted by Neil Partrick
Originally Published at http://deiradiary.blogspot.com/2022/09/time-to-talk-about-british-republic.html
Tweet
This entry was posted on 17 September, 2022 in homepage and tagged Neil Partrick, Time to talk about the British republic. Bookmark the permalink.

2 Responses to Time to talk about the British republic