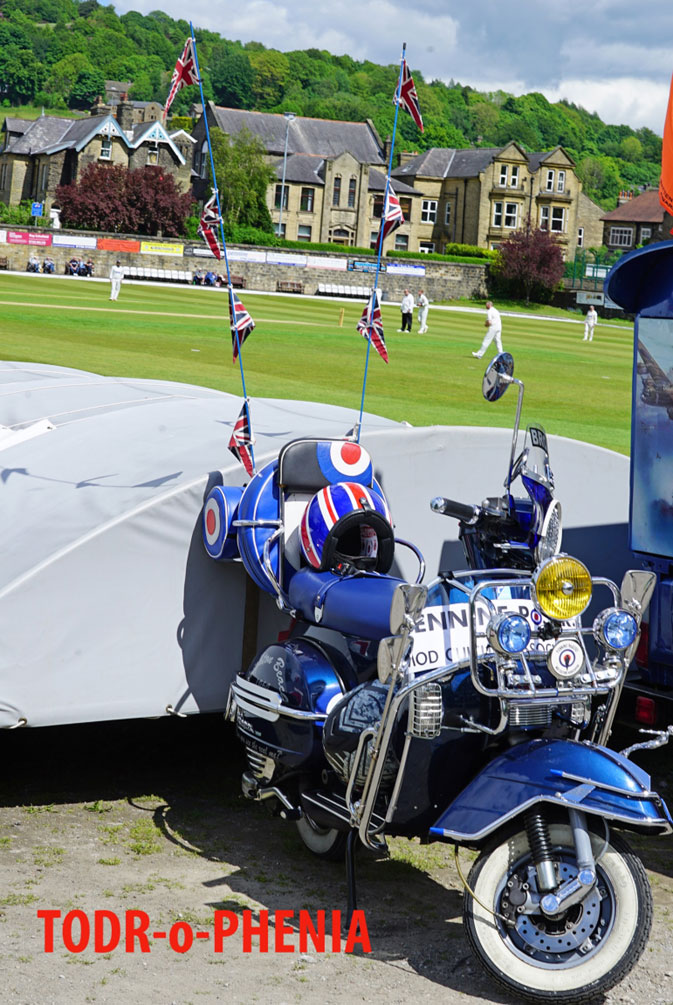 Scooters R Us: A Mod Way of LIFE!

Alan Dearling marvels in the midst of a mayhem of scooter exhaust fumes and the sounds of Yorkshire cricket! See many arriving at the cricket ground: 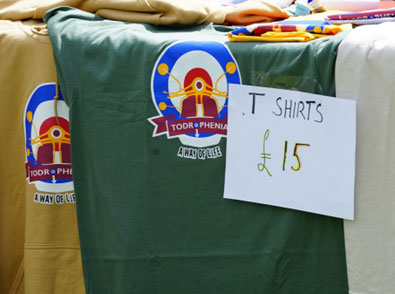 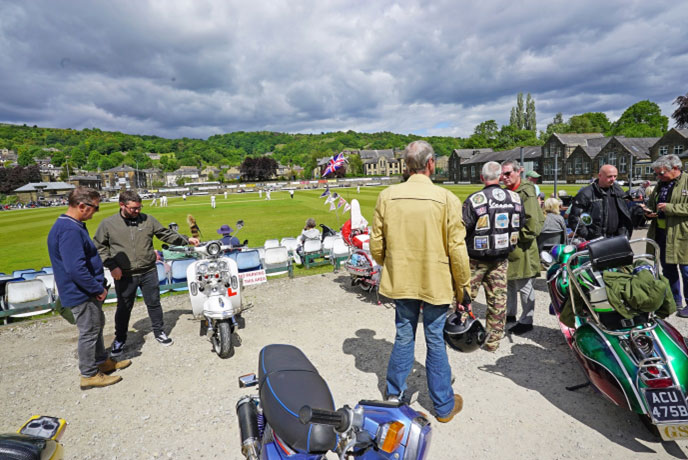 I was invited to come along to ‘Todrophenia’ by one of the organisers, Daz. He believes, passionately, that it represents a significant slice of cultural life that doesn’t get enough recognition. I grew up on the south coast of England in the midst of the Mods and Rocker riots of the early to mid 1960s. Think Brighton seafront, ‘greasers’ in leathers, wielding bike chains. Mods tooled up too. But, it was also the time of Mod music, The ‘orrible Who, the Kinks, Yardbirds, early Rolling Stones – a strange melting pot of parkas sporting roundel symbols,  insect-like pop-popping exhaust noises emitted from the backs of Vespa and Lambretta scooters. And a lot of ‘dubes’ (a street name for amphetamine pills back in those heady, but also really rather dangerous street-fighting days). Academics turned this sub-culture into a phenomenon for study, such as in Stanley Cohen’s book, ‘Folk Devils and Moral Panics’. So, this event rekindled, evocative, very mixed memories. It was also surreal, as many hundreds of ageing scooter riders descended upon the Todmorden Cricket ground. Revving bikes, wave upon wave of blue, oily smoke, rhythm and blues live music indoors, lots of Union Jacks and military badges, blended in with the traditional sounds of a cricket ball hitting pads and being struck by the willow of cricket bats in the centre field. 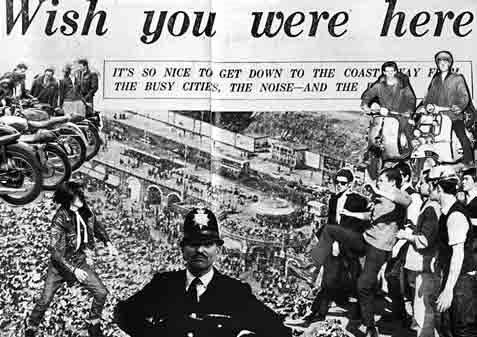 Of course, scooters and Mods have had other musical associations for successive generations. With ska, reggae, two-tone, the Specials, the Jam, Madness and many more, and for some, the still burgeoning Northern Soul scene following on from the original 1960s’ Mod world. Also, rhythm and blues (R&B), jazz and a variety of soul-styled music. Scooters, the fashions connected to them are indeed, a Way of Life. For me, the likes of Prince Buster, Geno Washington and the Ram-Jam Band, Small Faces, Steampacket 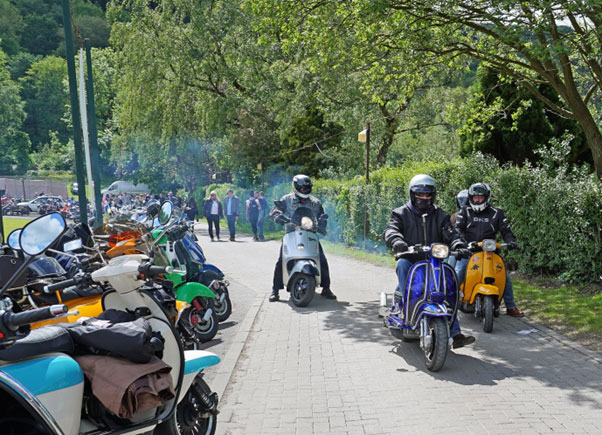 were among the musical performers who provided an audio and often visual tapestry to my adolescence in the 1960s. Then there was a ‘second coming’ of the Mod revival, particularly with the ascendancy of super-stardom of Paul Weller. Abetted by the return of the snazzy Italian suit.  Also, the Doc Marten’s boots, braces, shaved, skin-head haircuts, tatts,  Ben Sherman shirts and Sta-prest tight trousers. Style and working class street culture. But there was also a darker side, as Mod music also spawned, for some, skin-head culture and football terrace ultra-violence. Mod culture and the scooters were part of a ‘scene’ tinged with criminality – Youth Tribes at War with ‘normal’ society and with other segments of youth cultures. The issue of ‘race’ was complex. Young whites with a love of Black music, but also often involved with extreme right-wing quasi-political groups. The Mod-influenced musical styles were also apparent in the music from Oasis, Ocean Colour Scene and Blur. 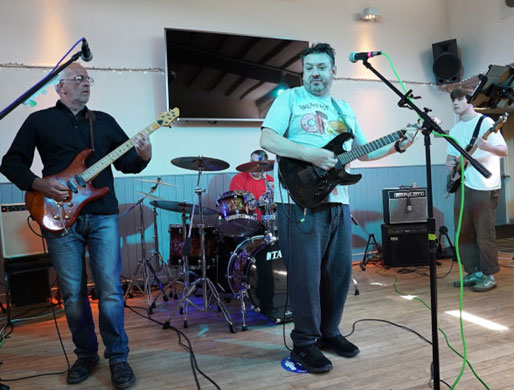 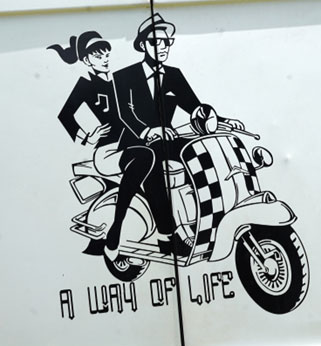 Very different than the Todrophenia event, which was an opportunity for a celebration rally. A ‘scooter run’, an outdoor space and place to show off the accessorised scooters with many decals, badges, a myriad pageant of wing mirrors. Skinny scooters, hybrids, weird heavy metal scooters. Three-wheelers, inventive, mobile abstractions. Patriotism, and ever more of the pungent exhaust fumes and blue smoke. Plus, live music, I think from Detox, and djs playing the sounds of Mod as the Tod Cricket Club clocked up a record day at the bars! 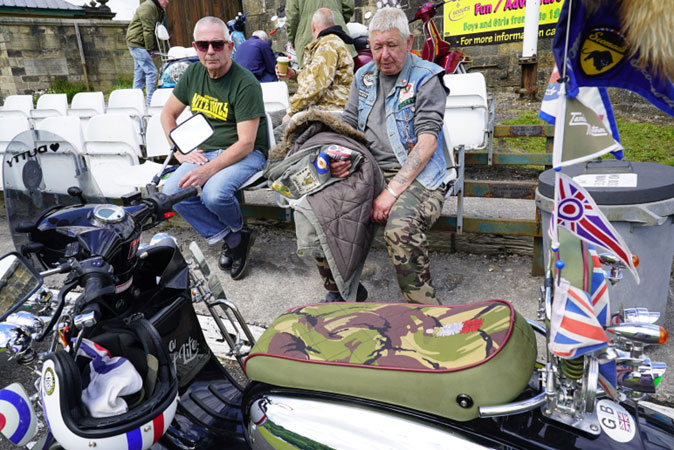 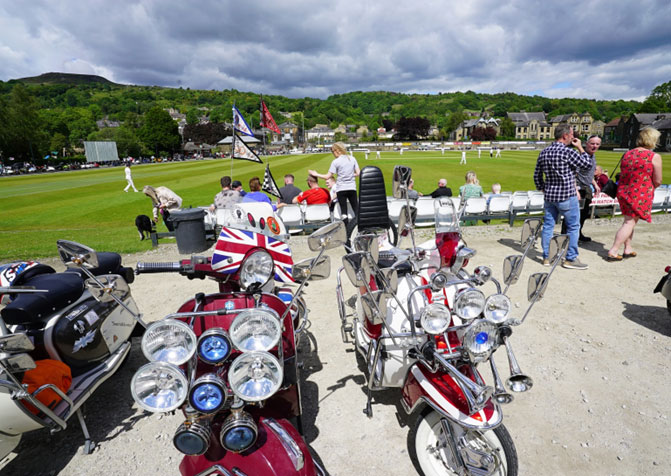 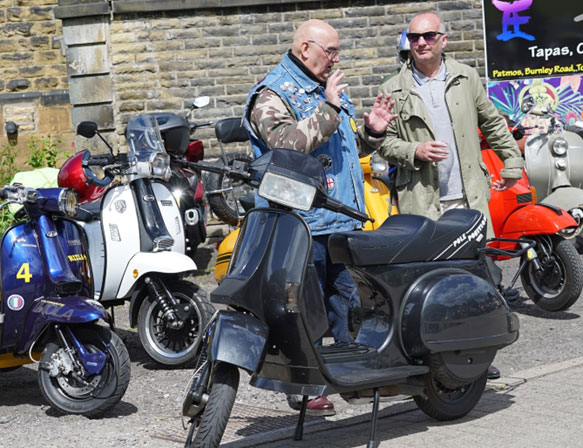 Tweet
This entry was posted on 11 June, 2022 in homepage and tagged Alan Dearling, TODR-o-PHENIA. Bookmark the permalink.