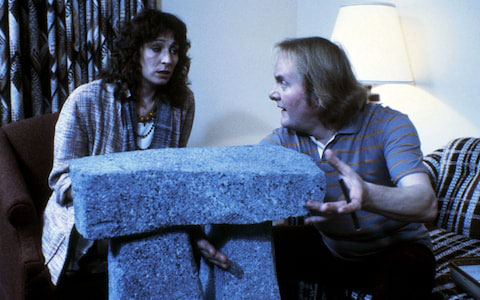 Tony Hendra, who has died aged 79, was one of the most brilliant satirists of the post-war period. He formed the link between the Cambridge Footlights team, in which he collaborated with John Cleese and Graham Chapman, and American institutions such as the satirical magazine National Lampoon and the NBC show Saturday Night Live where he was instrumental in launching the careers of John Belushi and Chevy Chase.

In Rob Reiner’s classic 1984 “mockumentary” This is Spinal Tap, Hendra plays the band’s clueless manager Ian Faith who carries a cricket bat which he uses to immobilise troublesome bystanders and (in one of the film’s most memorable scenes) to trash a television set. (“In the topsy-turvy world of heavy rock, having a good solid piece of wood in your hand is often useful.”)

He was the co-founder, with the artists Peter Fluck and Roger Law, of Spitting Image. “Tony Hendra,” said Fluck, “is one of the few genuinely remarkable talents I’ve encountered, ever, in my life.”

As a youth, Hendra aspired to enter the priesthood, but he would instead embrace a lifestyle that was reckless even by the standards of associates such as Belushi and Richard Pryor.

“When Spinal Tap appeared,” Roger Law recalled, “we had a Spitting Image ‘works outing’ to see it. At one point in the film, Tony declines a drink. The audience stood up and cheered. It was the first time any of us had ever witnessed this.”

In A Futile and Stupid Gesture, the 2018 drama documenting the history of National Lampoon magazine, where the Englishman was an editor from 1971-78, the part of Tony Hendra, who struggled with his weight for much of his life, was entrusted to Matt Lucas.

In Hendra’s time there, National Lampoon ran bad-taste features such as “The Case for Killing Our Aged (You’ve had your fun. Now butt out”) and “Nancy Reagan’s Guide to Dating”.

Hendra orchestrated the photo shoot which showed a collie with a gun to its head (“If You Don’t Buy This Magazine, We’ll Kill This Dog”). He oversaw the cover displaying a barbecue with the caption “How to Cook Your Daughter” – a headline that would return to haunt him, as unproven allegations of sexual misconduct blighted his later life.

“I met him in New York in the Nineties,” Roger Law once recalled. “He’d just been sacked by somebody. We went for the inevitable drink. He said: ‘Rog – this guy who just fired me – did he ask you about me?’ I said, ‘Yes. He wanted to know whether to hire you. I told him, “Hendra is extraordinary; a truly great satirist. But he is a lying scumbag and an alcoholic and he will f—ing let you down.’ Tony said: ‘Will you repeat that in court?’ When I asked why, he said, “Well, he fired me. It cost me $200,000. I mean Christ, Rog, the guy was forewarned.’ ”

On social excursions, Law added: “You could be out for four days. There was cocaine. Tony once hurled a dustbin through a plate glass window. In the middle of all this, he would suddenly take you to a Catholic church. Then back to the bar.”

Hendra was a gifted and perceptive observer of other comedians’ motivations and techniques. Going Too Far, his 1987 book focusing on subversive pioneers such as Lenny Bruce and Dick Gregory, is the definitive history of the genre. Last Words, his 2009 “sortabiography” of his friend, the legendary stand-up George Carlin, is one of the great books in the history of modern comedy.

In 2004 Hendra published Father Joe: The Man Who Saved My Soul. The book recounts his meetings with Joseph Warrilow, a Benedictine monk at Quarr Abbey on the Isle of Wight, his friend and confessor for over four decades, who died in 1998. It was an improbable relationship: Hendra was, by his own account, a prodigious sinner, while Warrilow was widely considered a saint.

The book went to number one on amazon.com. It was, declared The New York Times, “one of the greatest memoirs ever written”.

Its publication prompted Hendra’s daughter Jessica publicly to assert that her father had molested her as a child, but omitted the episode from his bestseller. This accusation, vehemently denied by Tony Hendra, was never tested in a court of law. The allegation appeared first in The New York Times in July 2004, then in Jessica Hendra’s own book, How to Cook Your Daughter, the following year.

“What if the charge is false?” wrote the paper’s ombudsman Daniel Okrent. “Either way, Tony Hendra will bear the scars of this article forever. There’s a difference between the right to know and the need to know, and in this case, the need escapes me.”

Jessica was the younger of two daughters from his marriage to his first wife, Judy Christmas, in 1963; they divorced in 1984. Hendra’s second wife was Carla Meisner, an advertising executive, the couple married in 1986 and had three children.

“Carla and I,” he said, “needed to protect our family. That was the rationale behind our silence over these stories. Some assume from that silence that they are true. They are not.”

Anthony Christopher Hendra was born in Willesden on July 10 1941 and brought up in Harpenden. His mother was Catholic but his father was not, though as a stained-glass craftsman Robert Hendra spent many hours in churches; he coloured the Battle of Britain memorial window at Westminster Abbey.

Tony was first educated, at St Columba’s school, by monks who recommended that pupils settle disputes “with the gloves – as Christ intended.”

He moved to St Albans School, where pupils were arranged alphabetically in classes. “In front of me was Stephen Hawking. The great utility of Hawking to his classmates was that he could do maths and physics homework at the speed of light – a concept, by the way, which only he seemed able to grasp.”

From the age of 10 Hendra was tormented by the notion of damnation. “I had dreams about hellfire,” he said. “I’d run into my parents’ room, screaming that I was dying. And damned.”

Tony was 14 when he met Father Joe. He had made friends with a couple living in a caravan: after the wife made a pass at him, her husband took Hendra to Quarr.

Warrilow told him: “You’ve done nothing truly wrong, Tony. God’s love brought you here before real harm could be done.”

He pleaded to enter the monastery, but Warrilow persuaded him to accept the place he had been offered at St John’s College, Cambridge.

At the Arts Theatre, Hendra saw Peter Cook and Alan Bennett in Beyond the Fringe. “I entered that theatre a monk,” he said. “I came out a satirist.”

He performed with contemporaries including John Cleese and Graham Chapman. Not long after he left university, Judy became pregnant. By now Hendra had a new comedy partner, the actor Nick Ullett. They relocated to Los Angeles in 1964, signed by NBC on a $25,000 option.

Hendra, right, with his comedy partner Nick Ullett on the This Is Tom Jones television show, Los Angeles, circa 1970  Credit: Donaldson Collection/Getty Images

“I have a letter from Cleese, written around this time,” Hendra recalled. “It says: ‘We’re considering a new television show. You might want to come back.’ I said no. But I don’t want to suggest that I ever believed I’d be good enough for Monty Python.”

Hendra married Judy, who joined him in the United States. For five years Hendra and Ullett performed in venues like the Café a Go Go in Greenwich Village, alongside figures such as Lenny Bruce and Woody Allen.

By 1971 he had dissolved his partnership with Ullett and was a crucial member of the rotating editorship that governed National Lampoon. He moved his wife and two young daughters to New Jersey, close to the magazine’s New York office.

At Lampoon, Hendra said, “I took new vows: of disobedience and satirical purpose.”

Hendra proved to have an extraordinary gift for musical satire. At a time when Joan Baez’s stature as a civil rights icon was at its height, he composed a parody referring to the 1968 Oakland riots with the chorus: “Pull the triggers, n—–s / We’re with you all the way / Just across the Bay.”

The “Pull the Triggers…” line appeared on the first National Lampoon LP, Radio Dinner, produced by Hendra in 1972. The following year, working with Christopher Guest (who would star in Spinal Tap and direct films including Best in Show and Mascots] produced the off-Broadway show Lemmings, a parody of Woodstock. He received an audition tape from John Belushi and flew to the young comic’s home city of Chicago.

“From the moment I saw him,” Hendra said, “I knew he was amazing.”

Lemmings was adoringly reviewed in New York, then toured the US. Belushi was not a moderating influence. Hendra, 3,500 miles from Quarr Abbey, neglected his Bible for more secular pastimes, among them cocaine, infidelity and fishing with explosives. Belushi died of an overdose in March 1982. Hendra, meanwhile, had just reported for shooting on Spinal Tap; later that same year he attempted suicide with vodka and diazepam. But working on the film, he would later say, “saved my life.”

Hendra had mooted the idea for Spitting Image with Fluck and Law in the late Seventies in New York, but was eased out during the first series of the Channel Four show. “I wanted something explosive,” Hendra said. “I developed the sketch about Hitler talking to his neighbour Margaret Thatcher over the garden fence: ‘She reminds me of a she-wolf.’ The producer, John Lloyd, wasn’t interested in my sort of material. It was too political.”

Back at his New York home, a comfortable apartment on the upper West Side, he devoted himself increasingly to freelance writing. In the Nineties he edited Spy magazine, and subsequently worked on a number of film projects including collaborations with the Belgian animator Picha.

In 2006 he published his first novel, The Messiah of Morris Avenue, the story of born-again fanatics in the future who encounter a man claiming to be the reborn Christ. They loathe Jesus for his mercy, forgiveness and non-violence and erect a sign on death row: ‘CHRIST DIED FOR YOUR SINS! NOW IT’S YOUR TURN!’

In private, towards the end of his life Hendra was a generous, reflective and increasingly spiritual man, reluctant to revisit the earlier demented aspects of his CV.

Asked if he was worried at not having dedicated himself to a single outstanding show such as Monty Python, he replied: “It’s fine. I know who I am, and my friends know. I am proud of what I did.”

Tony Hendra is survived by his daughters from his first marriage, Katherine and Jessica, and, from his second, by his wife Carla and their children Sebastian, Lucy and Nicholas.

Tweet
This entry was posted on 7 March, 2021 in homepage. Bookmark the permalink.