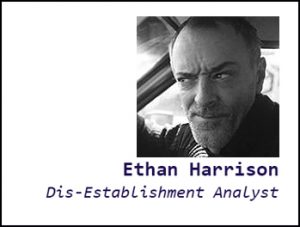 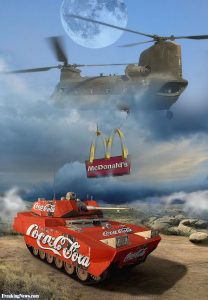 US President Donald Trump has passed more new legislation this time sanctioning corporate advertising on US military vehicles including; jeeps, trucks, armoured cars, tanks, aircraft carriers, nuclear subs and even, controversially, stealth bombers. The embattled President has appointed Senator Louis Cipher Bilderberg, CEO of Coca Cola and also interestingly board member of the Lima Tank Factory (a factory that makes tanks) to be the new tzar of what the President has termed ‘Battle Branding.’

Trump administration officials revealed the details of the new plans explaining, ‘In the past CDPO’s – collateral damage press obligations, or dead people as we used to call them, never actually knew why they were being blown up, as they had no televisions to watch BBC or FOX news. But now, with our new branding initiative, even the most destitute of useless eaters will recognize the globalised entities for whom they and their families are being destroyed. This new synergy between the two most profitable retail sectors of our economy; i.e. cheap consumables and war, presents both parties with exciting new product-placement brand-crossover opportunities. Advertising basically. Imagine the new commercials; ‘Coke. The real killer flavour –  Whoosh! Kaboom! Or ‘Make that two big Macs fella. I’m gonna eat the Taliban out of Afghanistan. Awesome! I’m wasted on politics. Mother was right, I should have gone into advertising. OMG! I’ve just realised; they’re exactly the same. High five!’

As with much of President Trump’s new legislation these new plans have run into trouble with several complaints coming in particular from top military staff. Five Star General Bud Weiser blustered, ‘What is that living turd trying to do to the Goddamn US army? We [US military] have spent upwards of 500 billion dollars camouflaging everything on the battlefield from the wheel nuts on the new Abrams 31b Tank to the Goddamn knives and forks in the mess tent. Now this over-inflated tangerine is gonna make it all visible from twenty miles away. Thank Christ the B2 stealth bomber can strike from at least two twenty times that distance before flying over the target and the remaining survivors see ‘The Best A Man Can Get‘ written over the bomb bay and the troops march in dressed as Goddamn Ronald McDonald!’

Expanding the advertising on weapons policy to its illogical conclusions Trump’s team have indicated plans to place Walmart ‘blip vert’ logos on the tips of the 1.78 million rounds of ammunition recently bought by Homeland Security to combat ‘student loan fraud.’ However, an idea to place a ‘Jaffa‘ logo on President’s Trump’s forehead was deemed a step too far even for this administration. Though US Secretary of State Rex Tillerson later commented, strictly off the record, ‘We will wait for orders from our owners about that.’