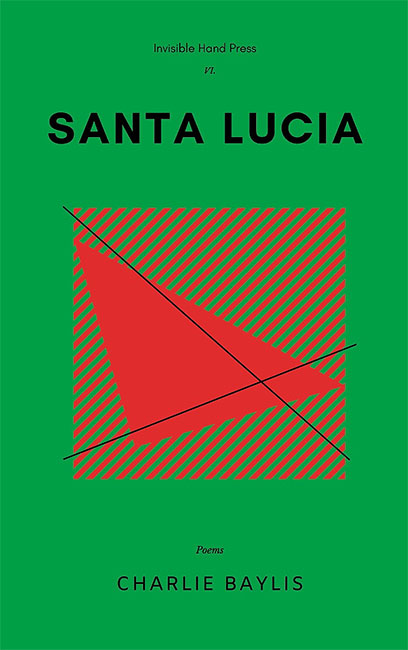 I’ve been on a subtropical Atlantic island for a week, doing nothing but swim, look at the spectacular scenery, eat, drink – and read. It makes you feel poetic, sipping sun-downers in the early evening with Madeira shimmering on the horizon.

It also makes you wonder what to do with beauty and poetic feelings – whether others really want to read about them: do I? Because I’m aware how annoying my first paragraph may be.

Baylis lives in the blazing heart of Spain – Madrid – though at first, I thought Santa Lucia was some island, possibly Caribbean. I’d reviewed his first collection, which was brilliant in places, but also a bit loose and sometimes too ‘poetic’, at least for my grim tastes. He’s much given to surrealism – a technique yielding diminishing returns – and extravagant metaphor. Both of these can be highly distracting and – sometimes – leave the reader groaning ‘not another one; can’t I have a poem instead?’

Of course, that’s personal; but poetry is unique, in how people quickly tire of (and even poets are wary of) its tricks. No other artform is so inherently self-destructive and annoying. Let’s face it, the baggage is often quite horrendous. All those creepy mugshots of sensitive souls, heads tilted, with dumb looks on their faces – offering ‘workshops’, doggedly convinced their reactions are worth sharing.

The problem, of course, is that poetic ability and sensibility exist and ARE vital, sometimes overwhelmingly so. The point is: ‘Having a talent is not enough: one must also have your permission to have it…’.

Anyway, Baylis looks like a poet, sounds like a poet – and certainly writes like one. Thankfully, it increasingly seems less affected; this pamphlet seems more disciplined and controlled than his previous work. He’s not done that by the quick-fix thing of ‘finding poetry in the the everyday’, with poems about Granny’s knee-caps or some unlucky sod’s Huddersfield council flat.

No, the writing is even more obviously poetic, just more aware of the risks. It’s using more bite and attack – more serious and grounded, less sugary, with salt added to counteract the wackiness. In the very first poem (all lower case) he shows how he’s now balancing the two. It opens with an Elvis impersonator but quickly moves to:

(from ‘the museum on the edge of santa lucia’)

He’s undercutting the extravagance here, both by that sudden use of the police but also by switching tone, and even voice. Throughout the collection, there are frequently sinister elements intruding, and there’s a very effective elegy to the deceased Sean Bonney:

the eagle with gold bars melting in her mind
lava over the opal mines
ashes in a bucket of ice-cream…
i’ve had enough of this shit…
write to me when the war is over
write to me when we have won.

My favourite poem is this one, ‘private beach’, quoted in its entirety, to show what I’m getting at:

the beauty of the city when the sun is rising.
the botanist collecting peas. classic god
shaped wholes envelop us, you.

what’s wrong? everything i do is dumb.
a ballerina pirouetting with a rhino.
nothing left of my leather toes.

summer burns.
getaway while you can.

What I especially like about this, is the preponderance of simple (but vivid) statement, with only a touch of the extravagant – the rhino dancing.

To use an awful cliché – less is more.

Tweet
This entry was posted on 28 August, 2021 in homepage and tagged Paul Sutton, Santa Lucia by Charlie Baylis. Bookmark the permalink.