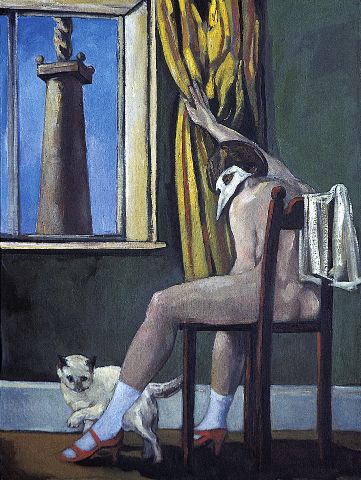 Martha slides into the bath, watching the residue of pond water from her body turn the soap bubbles murky.  This distracts her for a while as she makes islands of her breasts and knees in the water. The idea of going to Tate Modern is preposterous.  This is where she wants to be – the heat of the water holding her forever. Arching her back, she looks at her scar, now as livid as an unhatched bird from a smashed egg.  And thinks of Matt.

‘You helped keep the devil away,’ he’d told her during one of their drunken dinners.

‘Never mind. You children of the British welfare state are so lucky. You don’t realise.’

And he’d gone dark again, like the times she’d asked him to talk about his feelings and the war.  ‘My feelings are my business, and the war is now all of yours thank God.  Now eat your pudding.’   How he’d loved to watch her eat.

Sinking back into the water again, just her face above the surface, she thinks back over the years. It’s been a long time, watching his fame build.  Exhibitions in provincial galleries, a group show at the Barbican, a colour supplement interview, serious pieces in art magazines – and now the big one at TM.  Did fame make the paintings better?  No, they were already marvelous, but people approached them in a different way, through the filter of critical acclaim – accusations of sexism giving them an air of danger and controversy.  Matt loved to taunt the feminists, proclaiming that men and women are different – but that of course there must be equality.  Like Kate Moss and her coke snorting and David Beckman with his tantrum – a bit of bad behavior never did anyone any harm.  In the long run.  It’s getting chilly, and she needs to get ready. Getting ready meant finishing that letter. He’s sent her so many, and now he needs to receive one. She hauls herself out of the bath, wraps her dressing gown around her and pads downstairs and into the sitting room – back to that first chaste portrait.  She takes a bundle of  letters from a drawer in a desk.

It was Baudelaire who advanced the doctrine of correspondence of parallel lines of values in different realms of perception, and I observe calmly the increase in depth and importance of knowing and being with you. Apart from your beauty and charm, this has sufficient foundation in creating a sense of closeness and nearness between us. I feel in your company so absolutely free and relaxed – the only element of stress the thirst you leave behind.  I am aware that these feelings are experienced at one’s own peril and the fact that you are so dangerously near is an additional factor disturbing the balance of my messy world in which life and art intermingle. I am also interested in the Faustian myth and the idea of the artist as magician and conjurer of images. There have been several figures of this type in Europe and they have always paid a heavy price for their antics.  The real Dr Faustus is said to have studied in my hometown of Krakow in the 14th century where magic was publicly lectured on by learned old clots. Anyway, I have made sketches for a portrait of you, involving fundamentally three elements, your body, high-heeled shoes, and a mask. The mask hiding your face will have a strong erotic charge.

She didn’t understand that one at the time.  She does now, and takes out another…

Our experience yesterday left me breathless and captivated.  It was like a winged meeting, the sense of flying or floating in the air, of being enclosed with you in some person-to-person circuit outside the framework of earthly communication. I find that your senses operate within a tense magnetic field of simultaneous abandonment and sharp critical scrutiny. Out of the maze of thoughts and images and parameters, like in a cubist picture, suddenly a detail of skin, a touch, a sound of voice or outline of your limbs would bring for a second a breathlessness and clear knowledge of something fundamental to full bodied existence. Hazy with yearning I drove back from the studio and got stuck in a quagmire of cars, tankers and articulated elephants.  But I was sustained by my memories of wisps of hair, velvet skin and soft lips – the terrible things I have seen obliterated. I remember that day you came to see me ten years ago telling me that your mother had died and that you had to leave the college.    It made me feel a belonging with you that I cannot explain even now.  When you looked at me I saw my own mother looking back.  You have the same eyes.  Did I tell you that I never said good-bye to her?  It is terrible not to say goodbye to your mother.

Time to write some more of her own. She writes with warm supple fingers.

…You wanted me to paint too – almost bullied me into it, telling me about my talent.  But my drive was elsewhere. Mat – your war experience was a giant bruise lurking underneath your own surface tension and I would have absorbed it.   You see I’ve become an expert on war too – or rather its fall out.

View all posts by Jan →
This entry was posted on 13 August, 2016 in homepage and tagged Jan Woolf, Stanislaw Freinkiel. Bookmark the permalink.