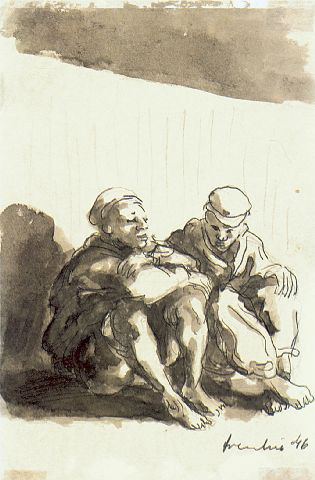 ‘When did you come to this country Matt?’

‘Nineteen forty-seven Jerome. From Beirut, where I finished my studies at the Institute of Beaux arts.’

‘Yes, after my stint, stint? Is that the word?’

‘With Anders’ army, riding around on a motorcycle with messages. Under British command.’  Stefko salutes a painting. ‘Still am of course.’

Jerome smiles at the repeated joke.

‘Let us go to Beirut Jerome.’

The text on the wall informs…

These drawings were the work of a young man highly charged by the experiences thrust upon him by the Second World War. He had known, more fully than most, and as a twenty six year old – the whole spectrum of the human predicament.  This is work fired by the burning curiosity of the novelist for human psychology, experience and perversity.’

Jerome finds the room muted after the vivid colour of the others. There are no paintings here, but drawings, etchings and prints banked in two rows around the walls.  Casual smears of diluted ink, emphatic pen stokes, urgent pencil stabbings reveal the mid 20th century life of Beirut; café culture, soldiers, prostitutes, families, beggars, trams, buildings.  Jerome knows these works well. He’d been dispatched to the expensive framers for consultations, discussing a framing solution for each one, watching as tatty bits of paper were carefully placed on floats by a specialist wearing white cotton gloves.  Pages from sketchbooks were edged by cream card, scored by the sharpest of Stanley knives, then more card; dark green, rust or dark grey entombed under non-reflective glass with narrow beech wood frames.

Stefko points to a sketch of a reddish brown ornate building; the original pen lines so light they are hardly visible. ‘This place was built by the French in the 1930s Jerome.’

‘Was it?’  Says Jerome, admiring the purple wash in the sky.

‘The Israelis bombed it flat four years ago,’ says Stefko quietly, remembering how he’d watched in grief as a city he’d loved as much as Krakow was attacked with bombs. ‘Just four years ago for Chrissakes,’ he whispers.  ‘And your government not only ignored it but perpetuated the outrage.’

‘Yes Blair. Your British Hannibal. He ignored all advice,  refused to make them stop. He might as well have bombed them himself.’  Stefko hangs his head.   ‘And they make him a Middle East peace envoy.’  Then, head up again declares ‘besides, it is the Near East. The idiots.  Come’, he says, wandering into the centre of the room, where sketchbooks lay open at selected pages in glass cases.  ‘Look at my sketches, lying in state,’ chuckles Stefko.  They stare together into the cases as intently as a couple choosing their dinner from a deep freeze.  ‘This is where the dirty pictures are Jerome – if you look hard enough. DO you look hard enough?’

‘I might,’ says Jerome, looking at a drawing of a naked woman bending,  a soldier fiddling with his fly.

‘I used to draw in the brothels you see.’

‘There were many in Beirut at that time. It was a port, with no unifying religious codes.’

‘Yes. The culture was mostly French with Islam around the edges.  A sexually complicated place, a cross dresser of a city, a place of cultural and artistic opportunity, not the sectarian hell hole it is today.’

‘The prostitutes were sold to the brothels by their fathers.’

‘That’s terrible,’ says Jerome, thinking about his mother.  She’d gone on the game when he was little, to get money for drugs. He’d never met his granddad. She didn’t know her father.

‘If a girl survived the rigors of her profession she could make enough money to set up a business of her own.’

‘Would she want to?’

‘Yes.  There was no other life. Some of them had a strange politeness,’ continues Stefko, ‘they were always smiling with the kind of smile which said I have what you want.’

‘But did you want it?’ says Jerome ‘they were slaves.’

‘Of course, but they presented fascinating images to an artist – their heavily painted faces, fat or thin bodies with occasional revelations of breasts, buttocks or a clean shaven crotch to a passing man – images of womanhood degraded and reduced to flesh.’

‘So you admit they were degraded,’ replies Jerome, thinking now of Amy from the children’s home who always needed a cuddle, how she might now be a prostitute somewhere.

‘As I went around on my motorbike,’ continues Stefko ‘some would lift their skirts and bare their arses in a gesture of defiance at the side of the road.  They would invite me and my comrades in for coffee. The rooms smelled of carbolic acid and sweat, there would be a bed and sometimes a wash stand and a jug of water.’

Then Jerome thinks of Jenny. How impossible to think of her selling her sex.  Then of Martha, her body a kind of no-man’s land between her lovely face and her boots.

Stefko and Jerome walk together along the line of glass cases, looking at the drawings, at fat madams so fat that their thighs bent in flaps over the chairs, their faces emerging from cheeks and chins, their be-jewelled hands like sausages and chunks of tripe.

‘Their obesity was deliberate Jerome,’ says Stefko.  ‘A grotesque parody of motherly generosity, and a sign of authority over the village girls.’

‘So these girls were turned into freaks to sell to men.  That’s terrible.’

‘It was the poverty.’

‘No but it is a reason Jerome and I think I need to sit down again.’

Got off on it then did you?  ‘Here,’ says Jerome, helping Stefko into a chair in the corner. ‘I’ll be back soon.’ And Jerome leaves the room, needing some time with his thoughts – of his mother.

Stefko steeples his fingers. Shutting his eyes, he delves back into memory – to the old second-hand bookshop by the brothel, buying a two-volume book of Rembrandt’s etchings, that hero of the chiaroscuro – his life’s companion in drawing.  It had begun to occur to him that he could invent figures and situations rather than just draw from life. He’d been drawing systematically with Indian ink – neither caricatures not cartoons but projections of his own imaginings. He remembers riding through an Arab village at dawn, seeing a young woman crouching and relieving herself behind a house.  It struck him as a real and acceptable image of femininity, and the beginning of his thinking in terms of counter-stereotypes.  Like Martha, always very obliging in the poses he wanted from her. He had painted Eva in the pose of the classical nude of course. Martha, partially dressed was naked.  Eva, naked, was merely nude.  He carried his sketchbook always, completing the drawings in his quarters in the evening. Drawing in those days was revelatory and self-rewarding enough not to have to show the results to anyone.  He’d later studied drawings of prostitutes by various artists; Caravagio, Goya, Degas, Lautrec but remembered that most artists presented them as attractive women. His were counter-icons, appealing to him as a theme to be explored in art. He could not foresee a time when these drawings would be considered offensive to women, as a leftish newspaper once described them. Would they have said that about Lautrec, Degas or Caravaggio?  It seemed that these artists were safe in their history; that their themes were of their time.  Were mine?

View all posts by Jan →
This entry was posted on 18 August, 2016 in homepage and tagged Jan Woolf. Bookmark the permalink.