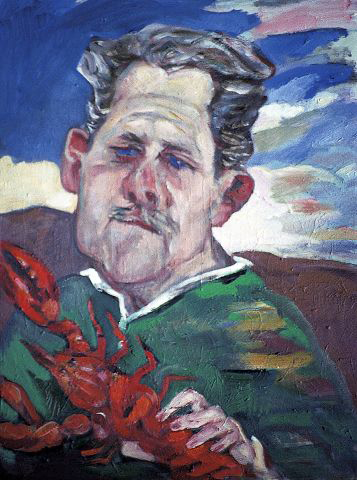 Self Portrait with Lobster – 1983
Stanislaw Frenkiel

She finishes her letter.

So there you are Matt, a pregnancy and a diagnosis.  A kiss and a slap.  That’s why I left you.

She folds the sheet of A4 and puts in a white envelope.  She’ll find a chance to give it to him – away from Eva.

Then she opens her wardrobe door.  Matt had liked her well dressed. He used to say that she wore costume, not fashion. She takes out the red woolen dress, good with the black boots that are flat enough to stride about in. Red with white hair – the Polish flag – ha.  Her legs are still good, so on with the ‘blue stockings,’ their joke.  Picking up a dangerous looking tangle of jewelry, like a large boiled sweet, she picks at a silver chain and amber earrings and puts them on, remembering something he said about painting. Wiping stuff from a canvas can be as creative an act as putting it on.  So off they come, the earrings exchanged for subtle studs, the chain rejected; the dress neckline is enough. She curls mascara into her eyelashes, twists her lipstick to smear her mouth with deep maroon. Then finally a burst of perfume behind each ear, and on her wrists; the perfume he’d liked, and that she replaces every few years, its musk as evocative as linseed oil.  She puts the invitation into her bag, beside the letter, throws on a coat, and strides through house like a principle boy in a pantomime to her front door.  As she opens it she sees a black cab turning into her street.  It’s as he’d had sent it. ‘Tate Modern,’ she tells the driver. ‘Blackfriars.’

‘Cool?’ Stefko flaps an arm behind him, ‘my life represented in a hundred square meters of paint Jerome. Cool are we?’

‘It all looks terrific.’

‘I banned the head apparatus by the way,’ says Stefko, scratching his chin.     ‘You mean the audiotapes?’

‘Because they interfere with the direct act of looking, hearing about it is not impotent.

‘Yes that is what I said, and please don’t shout at me.’

They walk into room two, now transformed by tables covered in white cloths. Waiters are putting white wine in ice buckets, opening bottles of red to breath, plates of Polish canapés, a treat from the embassy, are being laid out by teenagers wearing black.

‘I would like some wine,’ Stefko informs a waiter

‘Red.’  It was a good bottle of red he and Martha had drunk that day. The last time I saw her.

Stefko, Jerome a pace or two behind, walks towards the painting hanging at the centre of the long wall. Untitled 1982. He raises his glass.  How lucky he’d been to find libidinous joy and love in the same person. Is that why he’d concealed her face?  To keep it all to himself?  Or was he just a dirty old man needing a turn on.  He still finds the painting formally marvelous; the juxtaposition of vertical and horizontal lines as good as any Mondrian, the curve of her back extending into the arm reaching for the curtain is lovely.  And that colour – yellow against a difficult green, and a cobalt blue sky. The detail is enchanting, the childish white ankle socks, red high heels and the satin mask – the head three quarters turned towards the viewer.  He didn’t need a Freudian telling him what the tall grey monument outside the window meant. The cat picking its way around her feet was a twist on the faithfulness of the traditional dog. The flesh tones are lovely; evoking memories of the actual flesh he’d been about to touch.  Why did she leave him?  Just that short note.  I can’t see you anymore.  Why so sudden?

Jerome looks at the text for some guiding theory.

This portrait avoids fetishism yet disturbs the viewer asking why the masking of an individual enhances desire.

‘Her name was Martha,’ supplies Stefko, ‘finishing this was the last time I saw her.  And now I must get ready for the hullabaloo.  I need a rest. And to put on my suit.’

‘Right. Says Jerome, taking Stefko’s arm, leading him towards the director’s office where a make shift bed had been prepared for Stefko’s nap.

Funny, we both had a dear friend called Martha.

A bitter breeze comes off the Thames. Martha feels it as a breath, urging her on. She walks down the long turbine slope where other women totter on high heels, their men beside them.  The photographers ignore her. Nobody interesting!

Then on she goes, through the automatic doors, which open for her under giant lettering, the US and ST of MATEUS STEFKO.  She walks to the bottom of the escalator, where people rise up like toys on a conveyer belt, and steps on.  She looks at the walls expecting to pass pictures. What a waste, she thinks, blank white walls. She walks along the short mezzanine and loads herself onto the next escalator.  Now the black walls covered with the silly writing – names of artists.  Why not put their work up instead? There must be plenty in the storerooms.  She glides past Sign and Texture. More black walls. Up, up she goes, past Memory and Dream. They reach the 5th floor.

‘Your invitation?’ asks a young man.  Martha reaches carefully into her bag, and shows the invitation like a pass at a checkpoint.

And so it starts, thinks a be-suited Stefko peeping around the wall dividing the first two rooms.  Waiters launch themselves from their corners carrying trays of wine, beer and canapés; tiny piroshki, beetroot and cream cheese blinis.  The chatter intensifies: artists, journalists, embassy people, Eva in her black slacks, polo necked jumper and orange kaftan talking to the Director.  No-one looks at the paintings, hanging around like ignored guests.  Stefko walks towards Hannibal.  The Director, as if reading his mind, turns to speak. ‘I’m afraid Mr Blair will be late.’

‘Bugger,’ says Stefko, and with a polite cough stands in front of Self-portrait with Lobster.  Realising he looks foolish standing next to his painted self, and now looking more like the lobster, he moves with soft haste to The Cellist; the subject of his tie.

‘Hi Matt. You’re not going to stand there all evening are you?’

‘Jerome, how smart you look,’ says Stefko, stroking his tie, appraising Jerome’s smart white shirt and jeans that don’t hang quite so much at the crotch. ‘I bought the tie from the gift shop,’ chuckles Stefko, ‘I want people to compare the painting with it. A talking point.’

‘I hope so.  Are you free to enjoy the evening?’

‘Still need to be on duty eh?  Make sure people don’t finger things.  They have art guards for that. Come, enjoy yourself.  Have a drink.’

‘Later,’ says Jerome, ‘I need to speak to someone.’

So off you go again, thinks Stekfo, feeling bereft of the young man, aware of the gap at his side that will soon be filled by a stranger.  Or worse, a journalist.  Will Martha come?

‘Mateus,’ brays a tall, balding middle-aged man in a dark suit and English brogues. ‘Congratulations,’ he says, opening his arms as if the exhibition were all his doing.

‘Stefan.’ Says Stefko graciously, smiling into Malinowski’s face, thinking he looks more like a member of the British royal family than his Slavic parents.  Anton’s fault for sending him to that public school.  ‘How are you my boy?  I thought you might be standing by your father?’

‘Dad can look after himself.’

‘He always did,’ replies Stefko, dipping his head in respect.  ‘And who is this?’  Stefko shifts his gaze to the young woman in a bright yellow dress standing just behind him.  ‘Amanda, a friend.’ Stefko manages another shallow bow, this time towards the young woman.  Then back to Stefan. ‘Your father would be proud.  I understand your friend Mr Blair, will be late.’

‘If you see him, please tell him I should like to meet him in room two.’

‘Yes, she’s over there,’ says Stefko pointing to the corner where Eva is now in vigorous conversation with a brace of young artists.  But as Stefan wanders off with his new girlfriend into the crowd, Stefko follows them with his eyes, enjoying the juxtaposition of dark suit, yellow chiffon and sun-tanned flesh, thinking what a good painting they would make.   But will I paint anything ever again?  The urge is going, my critical faculties failing. I can just about hold a brush – the arc in my arm gone. This is it, my swan’s song. Where is Martha?

View all posts by Jan →
This entry was posted on 25 August, 2016 in homepage and tagged Jan Woolf, Stanislaw Frenkiel, Untitled A Novella. Bookmark the permalink.