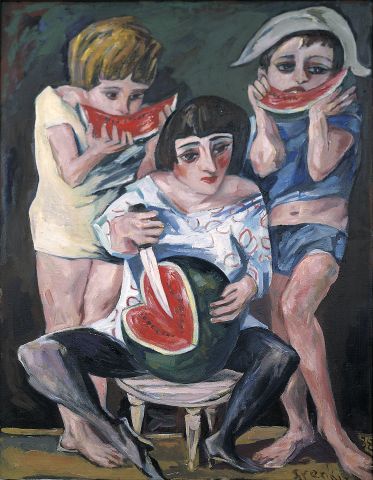 ‘Pardon?’  Jerome, feeling like the old man’s protector, had been busying himself nearby.  ‘Never mind. Take me to room seven,’ says Stefko, his hand outstretched.  Please, mouths Jerome, taking the hand.

‘Have you seen what’s in the shop?’ asks Stefko, being pulled to his feet.

‘Those things you put on refrigerators.’

‘Yes those. They used Elegy for Anton.’

‘ I know,’ says Jerome, hooking his arm into Stefko’s.

‘To warn you against rich food as you open the door I suppose,’ sighs Stefko, conjuring up his recently dead friend of sixty-five years.  ‘Fridge door as the river Styx Jerome, you got my joke?’

‘Ah, you are more sophisticated than I thought.’

‘Thanks,’ says Jerome, deciding to ignore the insult, set it free, not let it gang up with the others.

‘And they chose Melon Eaters as a puzzle for the kiddies,’ continues Stefko.

‘You mean the jigsaws.’

‘Yes, they have missed the sexual – er?’

‘Symbolism,’ repeats Stefko, rolling the word around his mouth like a sour berry, thinking of the painting of the two women eating huge slices of melon, another holding the spliced fruit between her legs, a knife poised suggestively.

But Stefko hasn’t heard. ‘The colour resolution is too high, and some of the pieces are badly cut giving the faces crooked eyes and jaws,’ Stefko says, grinning. ‘They have turned them into De Koonings.’  Jerome grins too.  So they had.

They enter a room of vivid colour – the distorted figurative work of the sixties and seventies, the text on the wall declares. They stop at Nude Woman Washing; a fleshy middle-aged woman with one foot in a sink, the other on tiptoe, her muscles straining to keep her balance, the mass of her rump the picture’s centre, one breast on show in the mirror.  ‘I was fascinated by a story,’ says Stefko, decoupling from Jerome.

‘I were. Le Diable Boiteaux, in which a demon pleads for rescue from the bottle where he is kept a prisoner.’

‘The demon promises the rescuer that he will be taken to the highest tower in the city where all the roofs will be removed, revealing the secret activities of the occupiers,’ says Stefko, with some excitement.

‘OK,’ says Jerome thinking this weird, and the painting overrated. It’s only a fat woman with her foot in the sink, great brushwork though, that foot – pure Francis Bacon.

The high whine of a drill shatters the air. ‘Jesus Christ.’  Stefko clamps his hand over his left ear.

‘No I am not OK.  I get pain ever since I was hit on the head with a rifle butt by a thug in a uniform – all because I did not stand aside on the pavement,’ continues Stefko in a ricochet of outrage.

‘No, I have just got up,’ grumbles Stefko, fiddling with the piece of beige plastic behind his ear. ‘That casual act of violence was the last of the straws. It made us leave Poland.’

‘Is that when you came here?’

‘That was later,  we had been invaded by the Germans. Don’t you know your history?’

‘You mean Nazis,’ says Jerome, holding his own.  ‘Where did you go?

‘Eva and I escaped to Lvov in the Soviet Union. We crossed the river at night.’  Stefko squeezes his eyes shut, recalling his mother’s face, bright with pain as he kissed her good bye.

‘The river Vistula? The one in that painting?’

‘No my boy the Som, a small river dividing Poland and the Soviet Union.’

‘Wasn’t the Som famous for…?’  but Jerome changes tack, wrong war. ‘Didn’t the Soviet Union used to be Russia?’

‘Yes, and Ukraine and Georgia – and – other places.’

‘Must have been dangerous.’

‘Not as dangerous as staying in Poland once the yellow stars were out.’

‘And you don’t mean at night do you?’ risks Jerome, knowing it a lame joke but one that would get at the facts without exposing the holes in his knowledge.

‘That’s right, the stars of David,’ explains Stefko, a lost look in his watery blue eyes. ‘We had to wear them on our clothes because we were Jewish. Still are,’ he chuckles.

‘How did they know you were Jews to make you wear them?’ asks Jerome, feeling that Jewish might have been the better word.  But Stefko, his bad ear still hurting, is elsewhere. ‘Lvov was an interesting place at the time Jerome, many artists and musicians, we had friends there and they put up with us.’

‘You mean they put you up?’

‘Yes, that is what I said,’ says Stefko irritably.  ‘Anyway, you don’t want to hear about the troubles of an aging painter.’

‘Yes, I do,’ says Jerome, taking Stefkos arm again, and squeezing it.   They walk on towards room seven, like a son and his elderly father on an outing.

They stop at Girl on a Swing. The swing has gone too high and the ropes are slack, giving the situation an air of danger, the girls mouth is agape with excitement as she looks below at a strange couple kissing – a yellow haired woman and a cleric wearing black.   ‘What does it say on the wall Jerome?’

‘Ah – what a fortunate condition for an artist, saves you all that theory.  Your natural intelligence can flourish. You ARE an artist aren’t you?’

‘And you don’t have to read your way around a show – just look at the art – no?’

I will read the rest of it to you,’ says Stefko taking off his glasses and holding them close to the wall,  …reflecting Stefko’s obsession with the metaphysical states of flying and falling.  And women’s’ underwear,’ he adds, putting his glasses back on again.  ‘That is what a nasty critic wrote about me only last week, asking how I get a show at a major museum like this.’

‘Right,’ says Jerome. But he can see why; the girl on the swing is showing a lot of crotch.

‘True eroticism lies in what is concealed, don’t you think Jerome?’

‘My dear friend Anton told that me we enter the world through the portal of a woman and spend the rest of our lives trying to get back there.’

‘Do you have a girlfriend?’

‘What about that media woman? I saw the way you looked at her.’

‘I said no,’ says Jerome, reddening.

‘That critic specu’…spec….what is the word Jerome?’

‘Yes, that these paintings were due to my failing libido,’ continues Stefko, remembering his last visit to the Venice carnival, the woman he’d met in the red beaked mask, a peacock feather in her hair, slumped drunkenly against a wall at the corner of a small bridge.  She’d pulled up her skirts, revealing herself in the moonlight, and he could do nothing about it.  ‘I thanked the critic for the insight, of course,’ sighs Stefko, letting go of the disturbing memory – but thinking now of Martha, how lovely she was as a lover, a model – and a painter too when she put her mind to it.  ‘Will she come tonight?’ he asks aloud.

‘No-one,’ says Stefko, walking on, dragging at Jerome’s arm.  ‘Those puritanical critics all had Egon Schiele posters on their bedroom walls when they were students.’

‘Very good,’ chuckles Stefko.  ‘When Hamilton paints his nudes and calls them angels it is all right – no?’

Jerome nods, ‘I like Richard Hamilton,’ he says, ‘one of my big influences.’

‘A good one,’ says Stefko,‘ with fine aesthetic principles – AND he should  get a show here, angels and all.’

They stop at another painting. ‘Do you like this one?’ asks Stefko, peering at – Women at the Seaside three figures leaning against the railings of a seaside pier, the wind whipping up their skirts showing meaty thighs. Two chatter excitedly to each other, their mouths gashes of red in pale faces, their hair shrubs of black and red. The other – with yellow hair – leans over the rails, the gulls wheeling in the distance painted with just one brushstroke. ‘Or maybe you prefer,’ says Stefko, squinting at the text, on the wall ‘the masterly brushstrokes of the sea and the sky.’

‘They’re like clowns,’ says Jerome, who does like the painting – quite. ‘Really?’ says Stefko, delighted. ‘Someone called me the… ‘er…Archie Rice of expressionism, do you know what that means?’

‘Good. Neither do I.’ says Stefko. ‘Come and meet Anton again.  There is another portrait in the next room.’

View all posts by Jan →
This entry was posted on 23 June, 2016 in homepage and tagged Jan Woolf, Stanislaw Frenkiel. Bookmark the permalink.