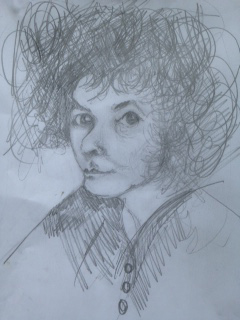 The story spans a day in November 2010, as the final preparations of a major retrospective of an aging painter are underway at Tate Modern. The private view; a jamboree of press, critics, celebrities and sponsors (even Tony Blair, a friend of the sponsor, is expected) takes place that evening, and the painter, Mateus Stefko, whose life has been blighted by war, secretly plans to make a citizen’s arrest.  He becomes attached to a young art handler, Jerome, unaware of Jerome’s past in the care system, and who was helped into art school by Martha, a charismatic art therapist who had strong unconscious feelings for him.   As Stefko and Jerome check the final hang, the paintings trigger Stefko’s memories:- pre-war Krakow,  POW in the Soviet Union, cosmopolitan Beirut and eventual arrival in the UK.  When they reach Untitled, a portrait of a partly dressed, masked woman, Stefko reflects on the intense relationship he had with its subject – Martha –  whose hour by hour agonizing about whether to accept Stefko’s invitation to the opening is spliced into the unfolding story at Tate Modern.  She hasn’t seen him for thirty years.  Jerome’s story meanwhile is told in flashback, with the mysterious Martha at the heart of it. Neither Stefko nor Jerome know of her existence for the other until the denouement that evening in front of Untitled.
This private drama is offset by a very public one, as Stefko waits and watches for his prey.

‘Taken any good pictures this week?’ asked Martha, watching Jerome scribble aimlessly, his knees wedged under a desk he suddenly seemed too big for.

‘Shots, sorry,’ said Martha, knowing that perfectly well.  ‘You must bring some photos to me next session. I’d love to see them.’

‘Prints,’ snapped Jerome, staring out of the window, sulking, feeling her eyes on him.

‘Oh right, prints,’ replied Martha, hoping she wasn’t being patronising. ‘What are they of?’

‘You mean my subjects.’

‘Of course, your subjects.’

‘Out there,’ he said, flapping his hand at the window, shops, faces, trees…’

‘OK,’ said Martha, settling back in her chair, realising that in reminding him of play with the younger ones, she’d blundered. She let the silence settle a while. Then, ‘tell me about the faces Jerome.’

‘If you want to that is,’ continued Martha.

‘Portraits, I call them portraits,’ he said, screwing up his paper, throwing it on the floor. ‘This shit’s childish.’

‘Fine, portraits,’ she sighed, ‘and please don’t waste paper.’ Martha folded her arms and pretended to look stern.  ‘Sorry,’ he said, not believing in the expression on her face.  He reached across her desk for more paper, slapping it down on his own, and started to draw. Martha sat back, arms folded. She understood his sensitivity for faces, the need to know the signs, the nuances and internal weather of people who could turn tricky, or might like him – even one day love him.  ‘What’s that?’ said Martha, watching a drawing find its form.

‘Yeah, but I told you this was childish, so you’re getting a kid’s picture, ‘ as his pencil swooped and looped, never leaving the surface, forming a face, then a scribble of  hair.  ‘I wanna take photographs. Can’t we go out?’

‘But the work we do belongs in here.’

‘Call this work?’ he said, before scraping a line through the drawing with a fisted pencil.  ‘I’m not doing this stupid shit no more.’ He took another long look out of the window.  ‘I like the photography teacher. She’s cool.’

‘Good,’ replied Martha, surprised by a slight wince of jealousy.

And in the silence that followed, they both knew that he was growing up.  Martha watched him, realising that she could do nothing else, as doodling or writing on her own paper would be loaded with significance, almost as bad as looking at the clock. ‘You’re fifteen soon aren’t you?’ she said.

‘Of course not, you have another year.’

‘I hope so,’ replied Martha, catching the panic in his voice.

‘No more fuckin’ carers,’ he said, spitting on carers.

‘OK. You know I’ve managed to keep you here longer than anyone else, not because you’ve trashed so many foster carers but because our work is helping you, and now that you’re doing photography with….’

‘But you know she loves you,’ Martha replied, rather syrupy, before she could say there’s a good chance I can get you into art school.

His anger gripped. ‘But she still…’

‘I know, leaves you sometimes, when she’s ill, and has to go to hospital,’ interrupted Martha gently, knowing when he needed to hear these things.  ‘Her love is unconditional.’

‘It means forever, whatever you do and however you are.’

‘Did you take your pill this morning?’

‘I see,’ said Martha, with a theatrical sigh. Part of her strategy was to make it appear that she supported the Ritalin, but subtly concur when he refused; the collusion, they both knew, was the glue in their relationship. They also knew that if  ‘his behaviours were too challenging’ as his last conference report had it, the social workers would monitor the pills – a fine game.

‘Nah, I’ve worked something out.’

‘My mum didn’t choose to get ill, and it wasn’t my fault.’

‘No Jerome,’ said Martha, feeling tears begin to prick, reaching for the box of tissues.

‘You got a cold?’ he said, flicking a look at the clock by the door.

‘Think I must have,’ replied Martha, blowing her nose.

‘And another thing, Miss, ‘er Martha.’

‘You’re paid to be with me innit?’

He turned to face the window again, ‘until ten to eleven, ‘an that’s now.’

‘Yes, until ten to eleven, and then the following week when the time is just ours,’ she said, reddening; wishing she’d said yours.

‘What about when I leave?’

‘What’s that s’posed to mean?’

‘Right,’ she said, ambiguously, ignoring the time. ‘How about some more drawing?’

They sat a while in this new atmosphere between them.

‘Will you take me out on my birthday?’ he said, smiling back.

‘That famous art gallery with the faces?’

‘I’ll have to take the others too.’

‘Bring me some portraits Jerome, OK?’

‘Cool,’ said Jerome, getting up, ‘an’ you can chuck that in the bin,’ he said pointing at the crumpled paper.

‘We’ll see,’ said Martha, seeing him out of the door. Then she picked up the paper, smoothed it out and filed away the last drawing of his mother.

Tweet
This entry was posted on 30 June, 2016 in homepage. Bookmark the permalink.