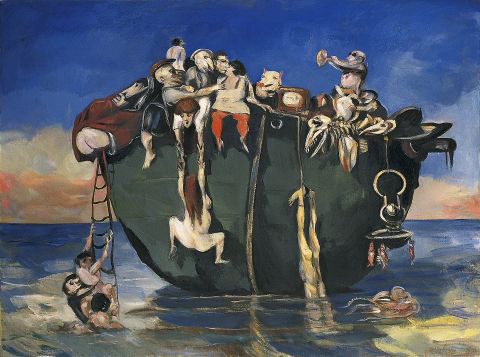 Stefko steps back and forth in front of the painting in a minuet of appraisal, his sense of who he is lurching from Great Artist to Old Fool.  ‘Do you like this one Jerome?’

‘Well,’ replies Jerome the diplomat, it’s very well executed….I mean …painted,’ he blusters. But he admires the draftsmanship and painterly skill, thinking it would make a good greeting card. One that people who didn’t know much about art might send – thinking they knew about art.   He likes the idea   – the upturned military helmet for a boat, its passengers clinging onto the side or dropping into the water, one of them partly submerged, hanging from the side of the boat by his feet.

‘Why did you say well?’  interrogates Stefko.

Because it’s not your best, Jerome doesn’t want to say, neither does he want to add it’s kitsch.’

‘Maybe you like it more than you think?’ says Stefko.  ‘It has Dali’s over controlled brushwork. I suppose you like that fraud Dali – no?  All teenagers do, you should see them flocking around the Burning Watch downstairs.’

‘Are you? Oh. What does the writing on the wall say?’

‘Sorry, I forgot about your condition.’ Says Stefko’ ‘I will read it to you.’

Ship of Fools – 1982 –  drifting rudderless with its crazily ill-assorted human and animal burden, is an image of apocalyptic disorder worthy of Hieronymus Bosch. This indicates Stefko’s rage with gratuitous bureaucracy.

Stefko steps back. ‘Indicates,’ he sneers, releasing a tiny bit of spittle, wiping it off on the cuff of his shirt,  ‘who’d use a word like that? I bet it’s that media woman.’

‘I expect so.’ Jerome smiles. ‘Is it a metaphor for bureaucracy or something?’

‘None of my paintings are metaphors young man, but accidents of expression. Please do not make thoughts of them, but experience them, like that monster Francis once said – directly through the nervous system.’

‘Good, he advanced figurative painting by demolishing form you know, astounding that he was English.’  Stefko flaps an angry hand at the painting. ‘They must take it down. If they want to exhibit it they’ve got another thing coming.’

‘I think its think,’ repeats Jerome, unsure if it might not be thing after all.

‘If I stab it with a knife,’ says Stefko, narrowing his eyes, ‘like that woman did who attacked Rokesby’s Venus then they must take it down – no?’

‘No, we would repair it and then it would become world famous and you don’t want that do you?’

‘You didn’t have to,’ barks Stefko. But then he softens, ‘they are not going to risk a bad picture in a place like this are they?’

‘Of course not,’ replies Jerome, flattered now at his role of art counselor. ‘It is a good painting’ he lies, wishing he’d said ‘picture,’ like Stefko.

‘Hmmm, Stefko scratches at a chin that has produced a trace of grey stubble during the morning, ‘at least it has good colour, did they teach you the cuisine of colour at your art school Jerome?  Like here? Reds against greys, warm against cool?’

‘Yellows against blues,’ continues Jerome.  ‘We called it colour tension.’

‘That’s right.’ Stefko nods energetically.  ‘Did you study me?’

‘We did. You were in the Twentieth Century European expressionists’ module.’

‘Module? Sounds like a spacecraft – no?  I must have been the only Pole.’

‘No, we looked at Topolski.’

‘Ah Felix,’ sighs Stefko.  ‘So, I shared a module with Felix? Ha – you study me and look at Felix, quite right,’ says Stefko jubilantly.  ‘I met him just after I came to this country, painting his guts out in a tunnel by Waterloo station. A lively draughtsman but a kitsch-meister.’  Stefko points an accusing finger at Ship of Fools, ‘like this. Kitsch,’ he almost sneezes the word,  ‘the curse of the older artist.  The more famous you get the less people tell you,’ he says, running a hand through his hair. ‘I am going to make them take it down.’

‘But it shows your range,’ says Jerome, dreading a re-hang at this late stage.

‘Exactly, age affects the critical faculties. Mine are down there with my prostate,’ he says, pointing to his flies, ‘but my prostate is not what will get me.’

‘Yes, yes, I heard you. Who owns the bloody thing?’ says Stefko, leaning forward, squinting at the label. ‘On loan from Stefan Malinowski, he reads.  ‘Ah, of course,’ he sighs, ‘Anton’s son, Blair’s friend.’

‘Is he coming tonight?’

‘Your foolish warrior?  Yes, he is coming tonight and I will lure him to Hannibal and make a citizen’s arrest.’

‘I meant Stefan,’ says Jerome, wondering if he should report Stefko’s plan to Jenny. Would be a good reason to find her for a private chat. But no.

‘Of course he is,’ replies Stefko, ‘young Malinowsky would never miss a room full of celebrated faces, especially if one of them is his politician friend with the silly suntan.’

But Stefko hasn’t heard. ‘He is a drugs dealer you know.’

‘None of that. I tried to paint on mescaline once like Huxley advised, but the results were catastrophic.

‘Then what does Malin – owski do?’ asks Jerome, deciding not to ask about this Huxley character.

‘He has become the very rich boss of a pharmaceuticals company. They make all sorts of tranquillisers and stimulants, upper and downers I think you call them. He trades in that kiddie calming stuff.’

‘Really? How fascinating,’ says Stefko.  ‘Were you over rebellious?’

‘No, dyslexic,’ I told you that earlier…and omits fucked up  –  too complicated.  Too complicated too to tell him about his wonderful teacher who helped him get off it, and into art school

‘Rich businessmen collect my work,’ says Stefko, ‘Malinowski bought mine because I was close to his father. ‘Typical,’ says Stefko pointing at Ship of Fools, ‘ that he should buy that one.  He has no taste, or rather he has too much GOOD taste, which is a form of BAD taste.’

‘I get that, yup,’ says Jerome, grinning.

‘ Exhibiting it here of course increases its value. So that when he is broke he can sell the bloody thing. You see how it all works?’

‘Yes,’ replies Jerome. They all knew.

‘The Polish Ambassador and Stefan Malinowski are also friends.  They’d come up with the sponsorship money at the last minute, defeating the trustees who’d wanted Seurat.’

‘So they get a living artist at the opening.  The dead man and his dots can wait for all eternity.’

‘Besides, the French were still sulking about their fishing quotas and hanging onto their artists – and the British were closing a deal on Silesian coal. Stefan’s money came in handy.  So let them show my silly painting,’ says Stefko waving his hand at it.  ‘As you say it shows my rage.’

‘Yes, and please do not shout at me. I need another nap.’

View all posts by Jan →
This entry was posted on 22 July, 2016 in homepage and tagged Jan Woolf, Stanislaw Frenkiel, Untitled Novella. Bookmark the permalink.