VISIT TO THE 70th EDINBURGH FRINGE 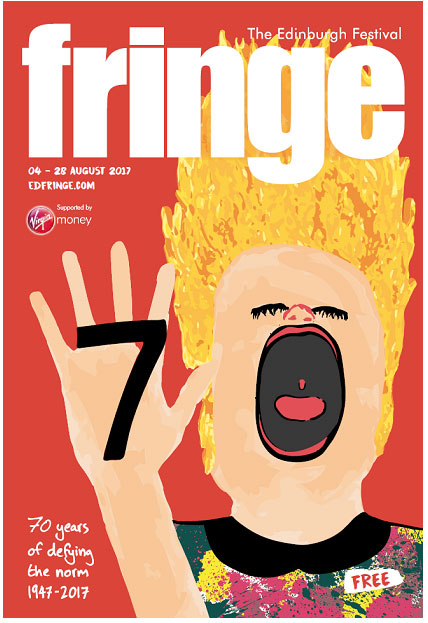 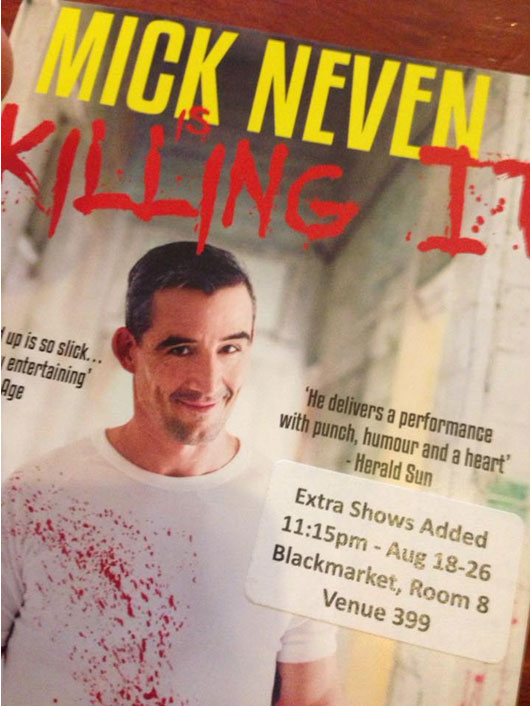 Here’s a hard-hitting, hard-working, comedian from Down Under, back in Edinburgh, doing 4 other shows no less, and already planning a 2018 return.

If you want comfort and Tim Vine one-liners, Mick Neven might not be your cup of Fosters, but if you like your comedy from a more edgy perspective, he won’t disappoint.  Recounting childhood, fatherhood, and a lot of other hood experiences, plus warnings against female genital enhancement surgery, which he believes is perpetuated by easy access to pornography, his views of society at large are thought-provoking enough to hold your breath before you guffaw.

In short, hold onto your seat belts, it’s a rollercoaster Wizard of a ride from Oz. 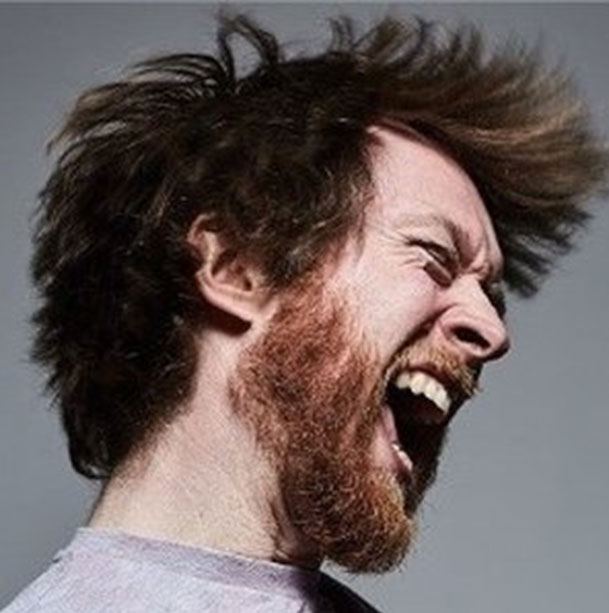 The amount of energy Gareth Cooper exudes in the first ‘Heavy Metal’ five minutes of this performance is remarkable.  One wonders how he’ll ever carry on, if he’ll survive the remainder of the show.  But, thankfully, he does.

He cavorts, sings, jokes, and generally astounds with his dynamism and comedy/musical expertise.   From the pulsating, prerecorded backing tracks that accompany his witty and sometimes poignant songs, to his acoustic serenades on guitar, there’s an undeniable warmth and charm that simply demands our attention, and gets it.

Suffice to say, you don’t have to be a Nerd to rock along to this show, just go! Now, in Pythonesque words, for something completely different.  This is a ‘comedy happening’, with no jokes, no apparent structure, and no predictable beginning, middle, or end, whatsoever.

We, the audience, sit in rows, facing one another, while Trevor Lock performs at the other end of the room.  The premise being, that if we see cheerful faces in front of us, we too will be filled with joy.  And yes, it works brilliantly.  How silly we haven’t realized this before.  I guess, it takes a genius mind to unlock such simple ideas. The show never starts, it simply rolls along, from one madcap interaction to another, helped by various audience members writing their subjective observations (in CAPITAL letters, on notepads supplied) on what is happening, which our host duly reads out, to hilarious effect.

Lock’s masterful experiment succeeds on so many levels, never one show the same, and every show ending before it’s begun.  Ingenious conceptual comedy. 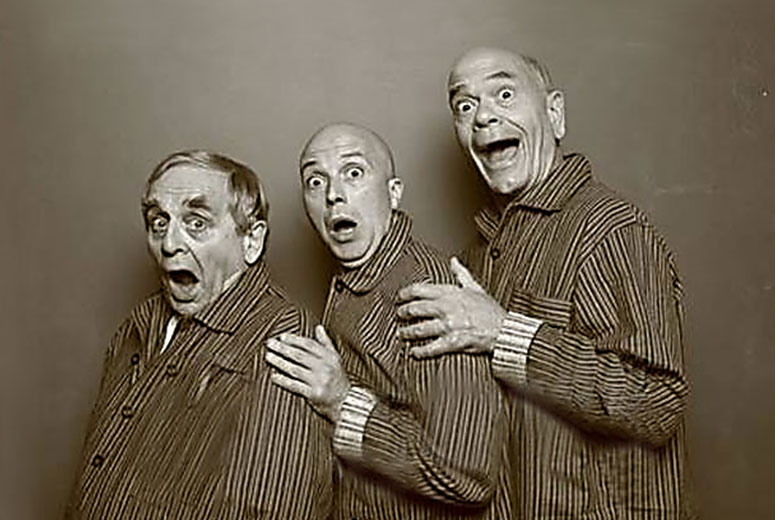 A JOKE by Dan Freeman (@ The Space, Edinburgh)

This is Theatre of the Absurd, reminiscent of Beckett and Pirandello, but with its own unique take on the classic ‘Englishman, Irishman, and Scotsman’ joke.

The three alternating protagonists, Richard Oliver, Dr. Who’s Sylvester McCoy, and Star Trek’s Robert Picardo, deconstruct, and reconstruct, their existence within the mysterious void they inhabit, finding hilarious new punchlines along the way, as they contemplate life, death, and the never-ending conundrums in between.   With philosophical rants, intricate word-play, vaudeville slapstick, even ukulele accompanied song, this helpless, hapless, trio vie for supremacy and survival, suggesting there must be three sides to every story.

Equal plaudits must go to all, for this break-neck hour of exhilarating theatre.  Dan Freeman, the writer, has come up with a theme which, with a little more development, could happily extend to a full evening.  My only reservation?  A more inspiring title maybe?  Other than that, A JOKE could be a future classic.

THE ARTIST AS EXPLORER (@ Summerhall, Edinburgh)

This is a wonderful piece of performance art which provides beauty and hope in the shape and sound of Aletia Upstairs’ towering performance.  Standing, some feet aloft, on an unseen plinth, covered by her monochrome art-in-itself gown, unraveling an endless parchment scroll, she speaks and sings her requiem to the artists who have come before her at the Edinburgh Festival: Joseph Beuys, Marina Abramovic, Robert Filliou, Anthony Howell, and more.

Meanwhile, below, the veteran artist and life-long promoter of the form, Richard Demarco, prowls among us, espousing his loathing of all that the Festival has become, “it isn’t a Festival!” he exclaims.  At least, not in the spirit from which it began, seventy years ago.  The birth of the Festival was a uniting of all the arts, to enlighten, and bring cultural solace, following World War II.

Surrounded by pieces from the Demarco archive, even a running video of the man himself, we enter a world of anger, disappointment, but ultimately, hope.  The words, and songs, with Aletia’s ukulele accompaniment (an instrument raising a smile in us all) are spoken and sung with such thought-provoking purity and love, that we, as an audience, can’t fail to mourn what was, and slowly begin to raise hope for what might re-emerge if, as Demarco observes and applauds, we celebrate and nurture the agricultures of our land.

The lasting message I came away with?  Art is in the very nature which surrounds us, there to be explored, and once found, art is within us all.   I do hope this piece might become a stalwart reminder in, and for, festivals to come.  Or, perhaps, a continuing sound and visual installation in Edinburgh?  It deserves further viewings and exploration.  Thank you to Aletia Upstairs and Richard Demarco, and their co-performers and contributors, for this important and inspirational work.

Protestimony: We need to talk about Calais…  (@ Summerhall, Edinburgh)

From ‘The Artist As Explorer’ performance, we were directed to experience the ‘Protestimony’ exhibition, just outside, which in turn, through film, art, and words, was a moving exploration of the plight and suffering of the Calais Jungle Camp refugees.  To give this installation full justice, I think it best to direct you to the creators themselves, via the following link.  Suffice to say, it extends beyond the Festival, through September, and I urge anyone up in Scotland to support and explore this remarkable achievement in all its despairing, yet hopeful, glory.   In the meantime, here are a few images I took, and the link to a video and more information from its creators Lujza Richter, Marthe Chabrol and Hari Reed: 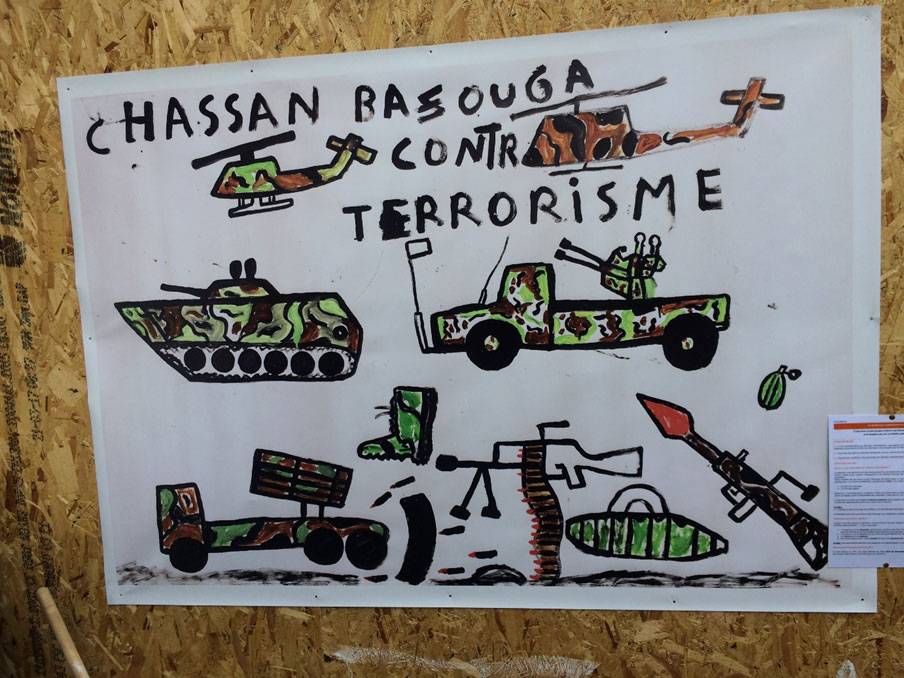 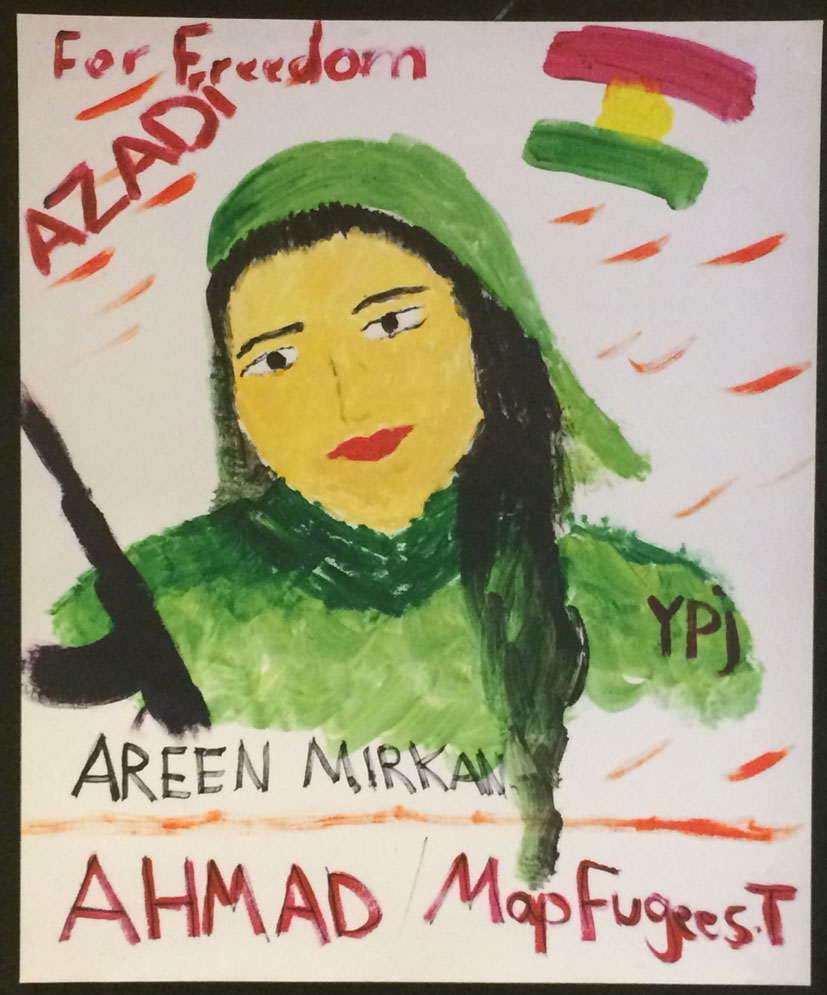 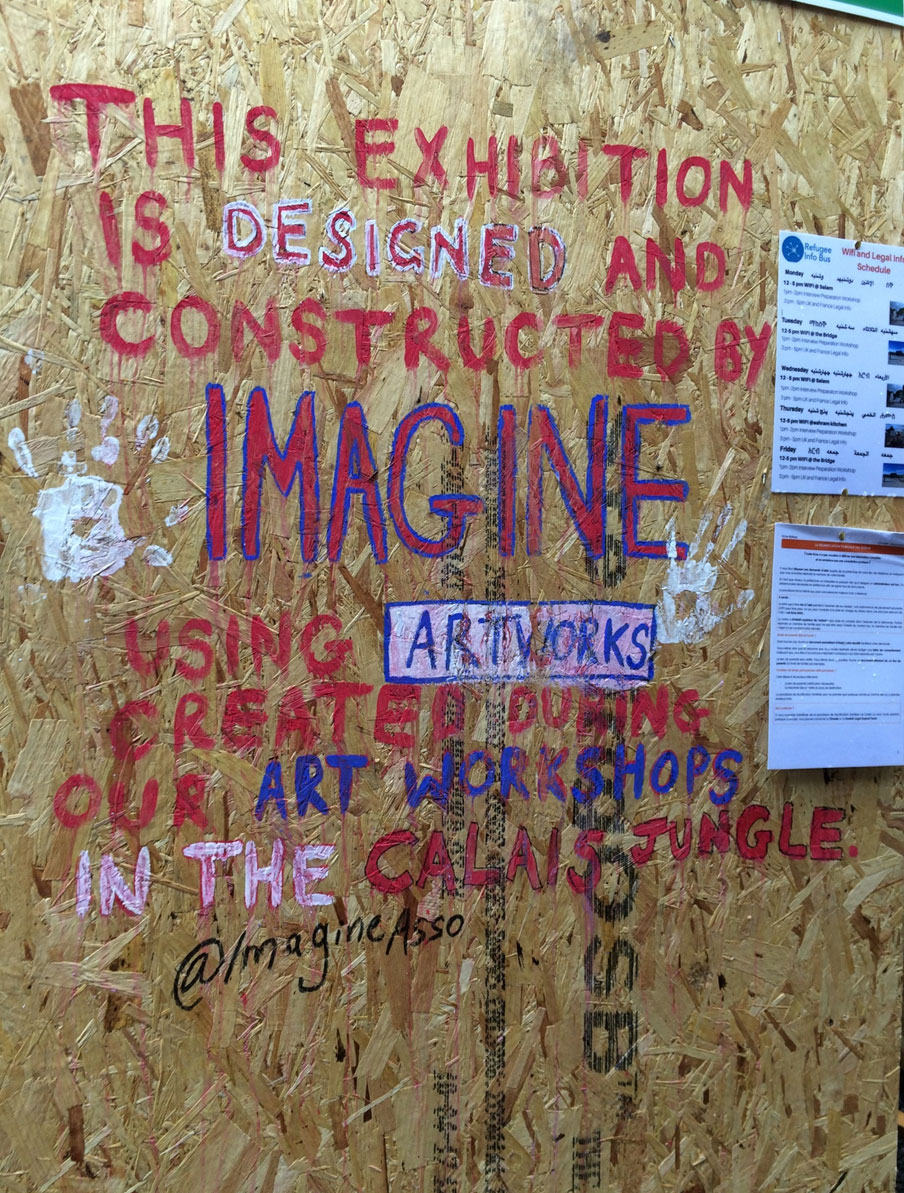 Finally, on visiting the 70th anniversary of the Edinburgh Festival, I still find the division and rivalry between the commercial paid-for Fringe and the ever-growing Free Fringe a subject of concern.

A few years ago, I made a Documentary, which STV sat on for months, and finally rejected, partly, I suspect, because they didn’t want to upset the apple cart of their beloved, and treasured, money-making Festival.  Nothing much has changed in the ensuing years, other than it grows even bigger, and so, my attempts to debate the ethos and future of the festival seem to remain as relevant as ever.

Here is a link to the short documentary:

THE BIGGEST LITTLE FRINGE ON EARTH

One Response to VISIT TO THE 70th EDINBURGH FRINGE