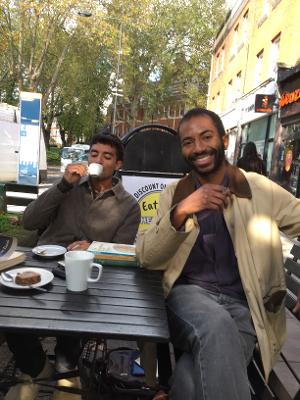 Other people.  An important part of my Covid avoidance day is what we used to call elevenses – and conversation.  Often on the phone, but better if I can get on my bike – or rather Susana Medina’s, who lent it to me (thanks Susana I’m looking after it) – and meet someone outdoors. Yesterday I met my fellow Pentameter’s writer/performer G.B.M. for coffee in West Hampstead.  We were later joined by Kevin Omosele, who works at the Keats library. They both read deep into the history of poetry as well as the moderns and contemporaries. They think about writing, where it comes from, why it hits a nerve, who with and why.  They read some of their work to me – lovely language cutting through the chug of traffic and pedestrian chatter.  Yet neither call themselves poets  ‘yet.’  I respected that ‘not yet’ as it suggests a process, that as young men they’re at the beginning of.  Café culture was all about this: conversation, ideas, and development.  Face to face, without a pheromone-zapping screen.  These are the poems.

Upon the dust, I kissed the young oracle
and slowed the cycles of ice,
and tinkered with the wheel of seasons
to grow the grail that births my might.

Dancing oracle, unwielding these nights
with sculpted taste and temperament
dreaming forth the mothering plethora
of blossoms offered to bellow
beneath the skull.

She walks like a thought that
unbolts the brain’s bustle,
and relieves the roomless ringing
to deceive damnation’s deforming
my bustling mothering might.

Again I grow in my grandeur and grief,
and sing of armless man,
armless and mirrored in this sullen fight.
Beholding nothing new, I missed
the time-slung prophet, I am now
left here waiting for old news again.

You enter a dark room.
Something else is alive in there
all shrivelled up, abandoned and alone.
You pity the poor creature,

so you cover it up
and bring it into the light.

But when you finally see it
you are shocked by its ugliness,
horrified by this thing – this wounded animal,
this withered rose, this image of yourself.

It looks at you,
points at you,
accuses
you.

You turn and run.

View all posts by Jan →
This entry was posted on 24 October, 2020 in homepage and tagged G.B.M., Jan Woolf, Kevin Omosele. Bookmark the permalink.