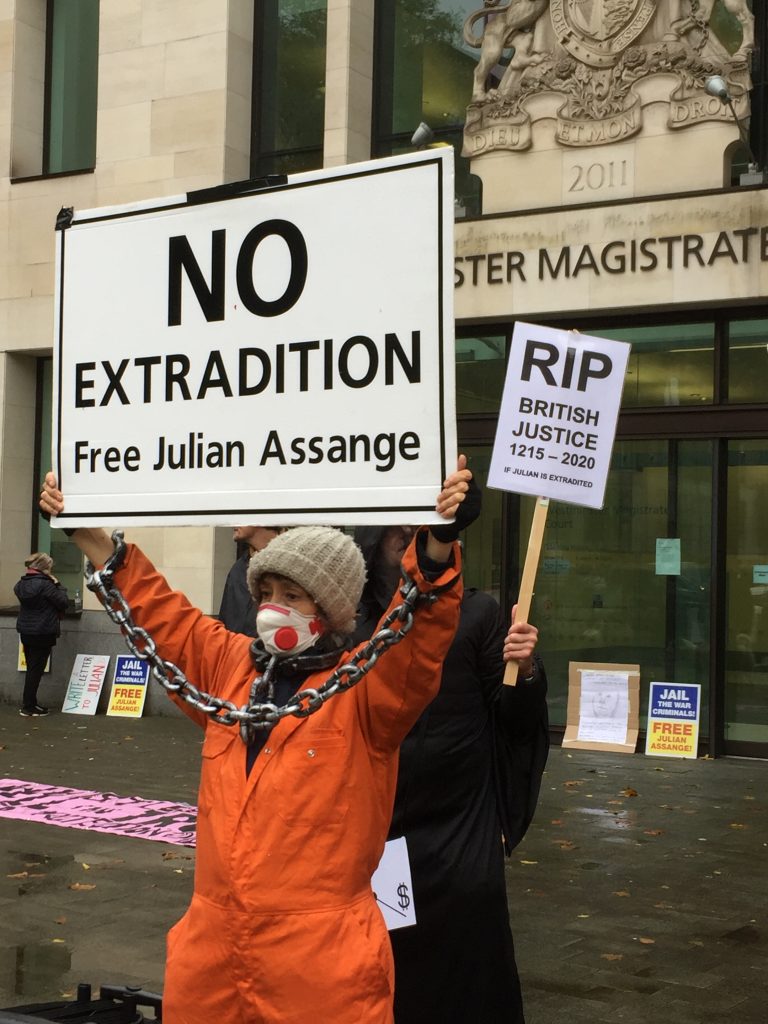 If you starve a man of all sources of vitality, he dies.   Sure, Julian Assange is given food and drink in HMP Belmarsh, but no stimulation and little hope.  He is in the process of being tortured to death; psychologically and emotionally.  Nils Meltzer, UN Rapporteur on Torture says ‘Assange’s procedural rights have been so severely and consistently violated that, by now, this extradition hearing has become irreparably arbitrary.  He has not had adequate access to his lawyers, he has not been granted a single meeting since the lockdown in March, he has had extremely limited access to his case documents, he only received a computer after a year in prison, he doesn’t have internet access, and on top of that they have glued down the keys of his keyboard so he can’t write…all of these restrictions are unlawful.   This in the land of so-called British justice – and if extradited to the land of the free, he faces a life sentence in a US jail.  This is Julian’s 10th year of detention in various forms, without any proven guilt.  Although not charged with anything he’s shackled. For what?  In 2010 he and Wikileaks revealed documents revealing the harrowing truth of the aftermath of US and British attacks on Afghanistan and Iraq: the murder of civilians, torture, humiliation, rendition and death squads.

The truth is on trial and if extradited to the US, the cause of investigative journalism will tank.   But look ahead, to a not too distant post Covid future.   Imagine we have made a better world, and that Wikileaks’ revelations have been a part of this. Might we not thank, even revere Julian Assange?  Will he have become a martyr, like those brave farm workers at Tolpuddle back in the day?  Maybe the religious will beatify him?  Saint Julian! But unlike Sebastian’s arrows,  an orange jumpsuit, shackles and a full phial of anti-depressants.  The crucified Christ also comes to mind. Might we look back and ask how we could have helped the persecuted at the time.   There’s no time like the present.  What are we making of the torture of this man, and his virtually secret trail.  There’s little about it on the corporate media. Yet news of his plight seems to be getting out there. At Westminster Magistrates Court yesterday, at an extradition administrative hearing (one of the monthly reports to a judge to confirm his detention) demonstrators held up placards asking motorists to Beep to Free Assange.  There was a cacophony of beeping on the Marylebone Road.  The next hearing is on November 26th and the extradition verdict delivered on January 4th 2021.  It is important to point out that the supervising chief magistrate in his case is Lady Emma Arbuthnot, whose husband is linked to the UK military, and who Wikileaks had exposed for alleged corruption.

Wikileaks has allowed us to see raw, naked power before it puts on a suit and tie, slicks back its hair and conceals the knife.’   (Jonathan Cook)

The day before Julian Assange was dragged out of the Ecuadorian Embassy – he wrote this.  ‘Who am I? I fought for liberty and was deprived of all liberty. I fought for freedom of speech and was denied all speech. I fought for the truth and became the subject of a thousand lies.’

View all posts by Jan →
This entry was posted on 31 October, 2020 in homepage and tagged Jan Woolf, Julian Assange. Bookmark the permalink.