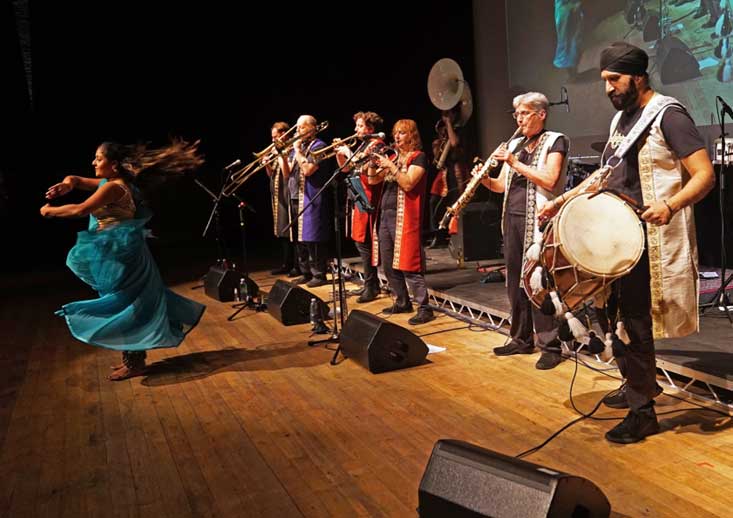 Alan Dearling catches up with the Bollywood Brass Band on their 30th Birthday Tour, at the Square Chapel in Halifax

The Bollywood film industry is huge; gargantuan in fact. According to Statista.com, Bollywood is the largest producer of films on the planet, and the second biggest international earner of film revenue after Hollywood, and ahead of the increasingly important Chinese film industry.

The music, the musicians, the Bollywood ‘stories’ from the films, the Bollywood composers… All this is a part of the Bollywood Brass Band (BBB) Experience. This is a carnival, festivals and a processional marching band. And, most significantly, a weddings band. Certainly they are the UK’s premier exponents of Bollywood brass and drum music…and they’ve just been out and about across the UK on tour sharing their love and passion for the music and films.

Formed in 1992, a collection of musicians met the Shyam Brass Band from India and became members of a niche genre of brass and drum bands playing Bollywood songs – the ubiquitous pop music of India. As the BBB told me: “The Bollywood Brass Band started small, playing for chilly Diwali celebrations and spending early Sunday mornings accompanying the groom’s party at Indian weddings.” 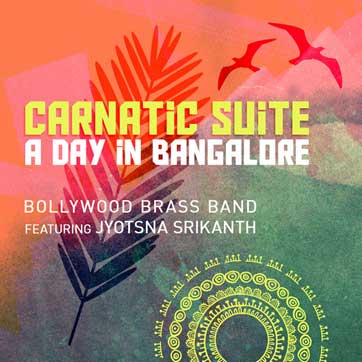 On this 2022 tour the BBB celebrate 30 years on the proverbial ‘musical road’.  The BBB show commences on the move, the musicians wend their way in a crocodile procession into the hall, playing lively, dancey music. On stage, they act as musical curators to present a musical tour, a show, and in many ways ‘an education’ about the different styles and film contexts of Bollywood film music from India, in particular the music of composers, A. L. Rahman,  Nusrat Fateh Ali Khan and Ilaiyaraaja’s Rakkamma. Members of the BBB have also written original brass and drums music in the Bollywood styles.  Along with their concerts and street performances, on their 30th Birthday tour they have also been running educational workshops in schools and colleges, engaging with young people using drums and brass instruments. The live show also featured some mesmeric dancing, adding to the colour and the spirit of their performances. Their albums have featured them alongside prominent Indian musicians and singers, including the two Carnatic connections albums, featuring violinist, Jyotsna Srikanth. 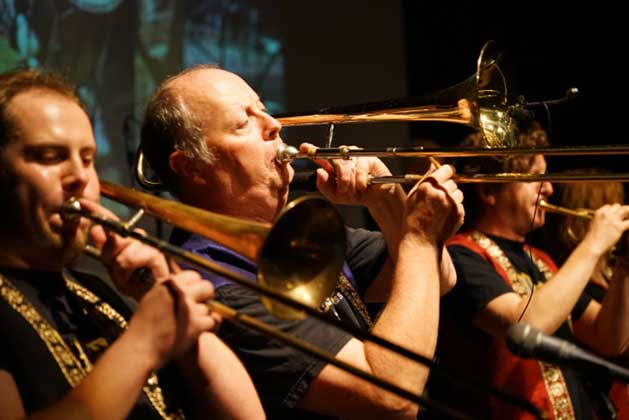 The live show includes back projections of Bollywood film selections. Featuring literally hundreds, and indeed thousands of performers. Bollywood is epic stuff. It’s the stuff of myths, legends, over-the-top spectacle, romance and humour. Imagine scantily attired Indian belly dancers magically appearing out of drums, cakes, whatever really. Whether in black and white or glorious Technicolor, Bollywood films are eye-catching, no, that’s wrong, they are eye-poppingly peculiar. 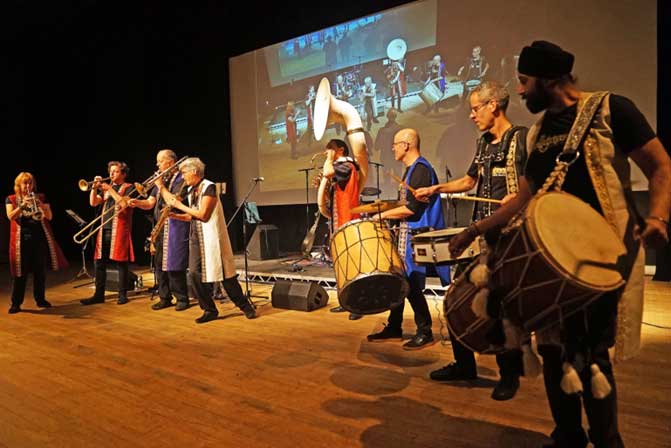 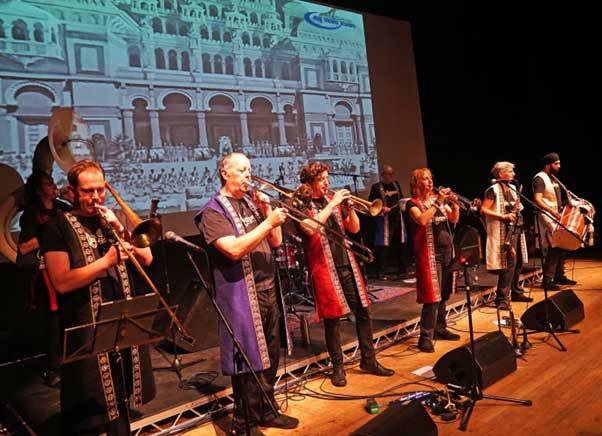 It’s a real life story of ‘taking coals to Newcastle’ – the BBB have taken their wedding musical extravaganza repeatedly to India and to Indian weddings across the globe: Bollywood Brass Band have performed in Delhi, Mumbai, Kolkata, Rajasthan, South Africa, Thailand and Muscat.

Here’s video of them performing at a wedding in Udaipur, Rajasthan:

They’ve also spread their musical magic from festival stages, including the Roskilde Festival, Denmark to Oslo’s Mela festival in Norway, through to the WOMAD festi in the UK. 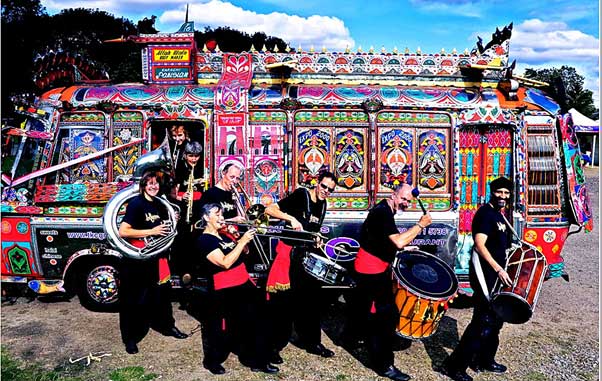 Tweet
This entry was posted on 12 November, 2022 in homepage and tagged Alan Dearling, Bollywood Brass Band. Bookmark the permalink.