Which Clown would you vote for? 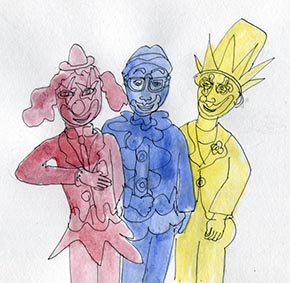 ‘Whoever takes the empire and wishes to do anything to it I see will have no respite.
The empire is a sacred vessel and nothing should be done to it.
Whoever does anything to it will ruin it; whoever lays hold of it will lose it.’
Lao Tzu

Many of the pieces on this site are concerned with the political iniquities of our times and in most cases are insightful and succinct. However, they seem to be futile, for there are a dearth of comments that might invoke and lead to interesting arguments and the emergence of new ideas.

Take party politics, a system that has lead to the attainment and preservation of power (of the party) to take precedence over the requirements and needs of those who elect them; but those who seek power in the first place are the least likely to have the kind of integrity needed to handle it, for it calls upon the very lowest element in human nature; that is, the love of self-importance and the universal yearning to be ‘somebody’, perhaps even with enough clout to ride a bicycle through the front gates of Downing Street; rather than an inconsequential common-or-garden pleb like the rest of us. Therefore it is no surprise that every move they now make calls forth criticism and a general contemptuous slagging off, which makes no difference whatsoever.

There is an old adage, almost a cliché now which says ‘Power corrupts’. Therefore it has nothing to do with a faulty political system, but has everything to do with human nature, and until this changes it will just be more of the same. How long will this take? One million years – two? Can’t wait around for that for obvious reasons, may as well wash one’s hands of the whole thing and indulge in the sublime art of the ridiculous, with perhaps a dash of whimsy by way of seasoning.

Religion has historically attempted to deal with this issue, but sadly the power freaks quickly took this as an opportunity to move in, adorn themselves with funny hats and take over.

Revolution: History demonstrates as does the situation in many parts of the world at the moment that revolution is not the panacea with which it is credited. It is an old, old story; authority is deposed and the scrabble for power begins among the factions and sub-factions until the strongest element takes power and the whole thing starts over again. One only hopes that those hotheads who attempt to foment such a revolution have a few philosopher kings/queens waiting in the wings to take the helm; people of unassailable integrity and deep political and social insight. This however, given the apparently depraved state of present human nature seems unlikely and better to let lying dogs sleep.

One of the latest political ideas to be formulated in this time is the concept of not voting. The counter argument to this is that our forefathers struggled for this right and suffered in its cause, some even lost their lives; see the Chartists and the Peterloo Massacre amongst others. Then there were the Suffragettes, force fed when on hunger strikes, and Emily Davison who lost her life under the hooves of the King’s horse at Epsom Derby. Thus it is said that the right to vote was so hard won that it should not be so lightly discarded.

This argument is countered by a question: Was the quagmire of political skulduggery which now assails us the vision of the future which these activists fought and died for?

However, although the electorate’s failure to vote might indeed send a shock wave through parliament (no bad thing) it is likely that deviousness would come to its aid, for the skulduggeroons would just vote each other in and as long as they maintained power over the police and military it would be business as usual.

The Monarchy. Many voices are raised to suggest that the Crown is irrelevant in these politically sophisticated times and the obscene wealth and property of those of Royal blood should perhaps be utilised in other more democratic purposes.

However, the present Queen is our Head of State and although a constitutional monarch with little direct power she has two main functions, the first of which is the one which maintains her position.

That is the granting of titles.

Without a monarch there could be no Lords and Ladies; no Dukes or Earls, and what’s more to the point no financial donors knighted and thus ennobled for their various contributions which ‘enhance’ our culture. It is in the interests of ‘the great and good’ to keep this goose in place and the golden eggs rolling.

Far back in history these honours were granted to the brave in battle who fought to preserve the Crown.
Now however these ‘gongs’ are liable to be awarded to puerile rock stars, sending them rolling all the way to the Bank.

Further to this, the new buzz word: ‘equality’, brings a ghastly new element to the event horizon, for is not the spouse of a Lord a Lady, and the partner of a knight, (even of same sex,) an Honourable?
Thus the concept of the Honourable David Furnish has already been mooted.

Honourable? Honour? Just look for a moment at the real meaning of this word – and then pass me a sick-bag.

The Queen’s second and main function however, is to occupy the position of Head of State, thus ensuring that no asinine power mad politician is able to claim the post. If the Queen were deposed another greasy pole would come into being for these power obsessed monkeys to scrabble up, stabbing each other in the back as they go, and what might be the disposition of the winner of a position which, unlike the constitutional monarchy would have almost unlimited power?

And one can be sure that the Great Liar himself would be unable to resist returning to throw his hat
into that ring.

Also… But oh dear, we seem to have run right out of sick-bags.