Why I Don’t Have a Mobile Phone 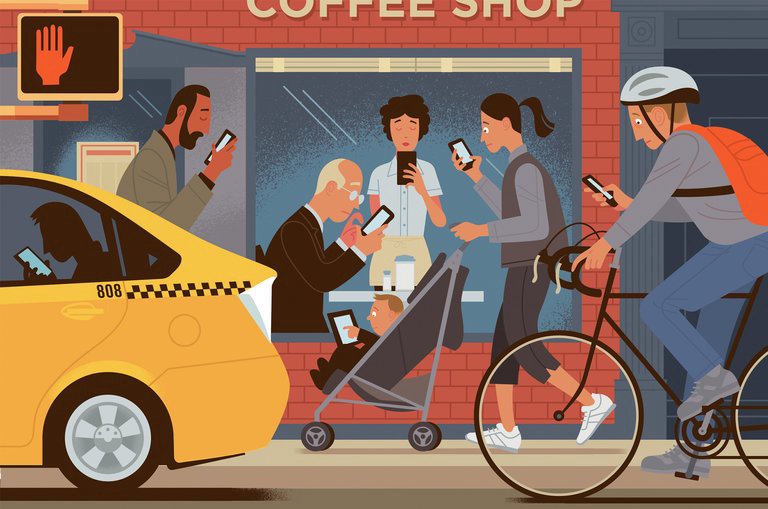 In the late 1990’s I bought an early model Ericsson mobile phone. Travelling around the UK countryside visiting farmers, it seemed quite useful, in spite of the very intermittent signal availability of that time. However, I found the masts which transmitted the signals to be extremely ugly and completely unfitting to the rolling beauty of much of the English countryside.

After a while I started feeling the side of my head to which I held the phone, heating-up. It was an unpleasant sensation and it concerned me that using this device involved putting-up with such physical discomfort. So one fine day I dumped it – kissing goodbye to the supposed ‘need’ for this wireless gismo and being thankful for the experience of being once again free to muse on the deeper nature of things without being interrupted by a plethora of incoming communications that, more often than not, contained little of value and could have been made via a landline.

It wasn’t until about ten years later that I started realising that others were completely addicted to this form of communication, and that the wireless cell phone’s way of working meant that the signals from the masts penetrated the human body and affected internal organs, especially the frontal cortex and hippocampus areas of the brain.

I remembered the x ray machines which, when I was a young boy, I used to stand in in the shoe shop and see the bones of my feet outlined clearly in a rather spooky pale green light. It made me realise that something similar was happening here – with the cell phone held against the sacred temple of the human head.

Soon I heard of people suffering headaches, nausea and giddiness after extensive time spent talking on their mobiles. I learned that the reason for this is that the transmission signals are actually microwaves – and I already knew that microwave ovens cook from the inside out – destroying the nutrients of foods cooked in the normal way, from the outside in. The UK organic food standards, which I contributed to as an early organic farmer, banned the use of microwave ovens in restaurants serving organic food, for this reason.

In the early years of the new millenium, Jadwiga Lopata and I set off on our epic campaign to prevent GMO getting into the Polish countryside – and indeed into Poland – which involved a lot of travel and a lot of meetings with a lot of people! We ultimately succeeded in fulfilling our task of getting every Polish Province to declare itself a GMO Free Zone, and soon after, achieving a national ban on the import and planting of GMO enacted by the Polish government. All this without the use of a mobile phone, Jadwiga having also rejected this technology for pretty much the same reasons as me.

This is surely a lesson for all those who throw up their hands in horror when presented with the evidence as to why they should ditch electromagnetic microwave radiation technologies that are now known to be destroying human health – and the health of the natural environment as well.

In the past decade a huge volume of evidence has been collated by doctors and scientists outlining exactly what EMF transmissions do to us all – and just how devastating are the consequences of becoming addicted to these pocket sized radiation bombs. Even when passively sitting in one’s pocket or next to one’s bed, scientists have shown how microwaves continue to actively pass through the cell phone’s internal mechanism and on to the human user. Toxic and carcinogenic pulsed radiation – which is the antithesis of nature’s benign vibratory wave signals – are picked-up by the cells and neurons of our body and brain.

In a period of just thirty years, our planetary and atmospheric environment has been turned into an electromagnetic soup of highly charged non ionising radiation, emitted by WiFi transmitters placed in virtually all hotels, restaurants, public transport systems and town centres of the Western World and beyond. In addition, literally millions of mobile phone base station transmitters are operating from houses, schools, hospitals and street furniture across a great swathe of Europe and North America and even extending into national parks and sanctuaries, where once one could escape their pervasive influence.

In the sky too, pulsed radiation transmissions are beamed down from satellites that guide the satellite navigation systems in cars and trucks, passing directly on to passengers most of whom have no idea that they are the recipients of these debilitating transmissions.

Probably the most worrying thing, as regards human, animal, plant and insect life, is that scientists have revealed the dangers to be ‘cumulative’ – that is – building-up incrementally over time, so that it may not be until twenty or thirty years of use that those involved are struck-down with varying types of cancers or neurological, physiological and psychological diseases. When it comes to outcomes for the health and well-being of both children and adults, we are playing with fire – and there can be no denying this fact.

This is a mass produced communications technology ‘untested’ for its health and welfare implications – and now vested in the hands of telecommunications and social media giants pulling in unprecedented financial profits that are placing them in an earning bracket greater than Big Pharma and Big Oil combined.

So ask yourself this: do you want to support the giant corporations rolling-out their latest weapons of mass destruction under the banner of 5G? Do you want to be an accomplice to the non ionising irradiation which is denaturing the very DNA of our irreplaceable planetary gene pool? Did you revolt against GMO? Do you see how your mobile phone is GMO in a new guise? Just another tool for the genetic modification of humanity.

Are you going to remain passively indifferent to the fate of birds, bees, insects, plants and trees which have never before lived amongst the electro magnetic pulsed signals that are now interrupting their essential biological sensitivities and survival mechanisms?

Wake up, my friends, the hour is late. Very late. I can promise you this, you will be hugely relieved to discover that dumping your mobile phone brings with it a renewed and refreshing sense of individual freedom. The sense that one can, after all, take control of one’s destiny without the aid of a convenience accessory that is draining the life out of life itself.

Julian Rose is author of ‘Overcoming the Robotic Mind – Why Humanity Must Come Through’, now available from Amazon and Dixi Books. See www.julianrose.info for more information.

View all posts by Julian →
This entry was posted on 30 November, 2019 in homepage. Bookmark the permalink.

4 Responses to Why I Don’t Have a Mobile Phone