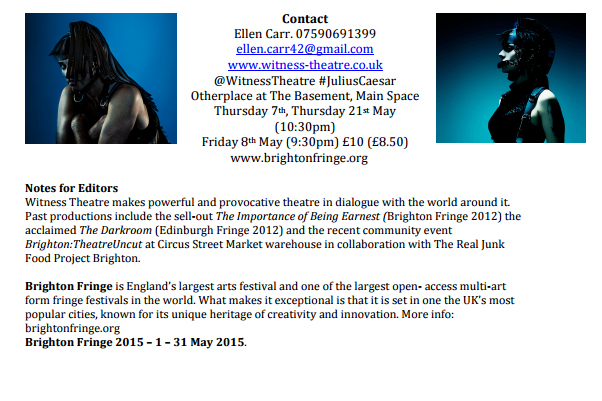 Witness Theatre is a young company dedicated to making theatre that is powerful, provocative and in a dialogue with the world around it. We like working with ideas that challenge us, that incite us to explore an area we may not know much about and we encourage our audiences to explore and question along with us.

For the 2015 Brighton Fringe in May we’re exploring the fetish world by setting Shakespeare’s Julius Caesar within a fetish club. This will be the first time the company has tackled a Shakespeare production and we hope our approach will be an exciting one!

Julius Caesar holds the theme of power at its core but the original text centres on masculine power in the realm of politics and armies. Our production places its focus on gender and power, the power play within the fetish scene in contrast to that in the political world. Our aim is to throw preconceived notions of good/bad, wrong/right open to debate. In the world of our production nothing is as it seems and even gender cannot be clearly defined.

In rehearsal we’ve been researching the fetish world, and developing a physical language and style for the production. Our aim is to evoke the club environment, to place the audience at the centre of the play and its action so they experience its events rather than just witness them.

We’re really pulling the text apart and making it our own – we’ve had to make cuts for time reasons, but are also chopping and changing scenes to fit in with the aesthetic we’re going for. What we hope is to create a version of the play that is accessible to contemporary audiences, and hopefully to audiences who may not normally engage with Shakespeare.

View all posts by Keith →
This entry was posted on 16 April, 2015 in homepage and tagged brighton Fringe, Julius Caesar, Witness Theatre. Bookmark the permalink.