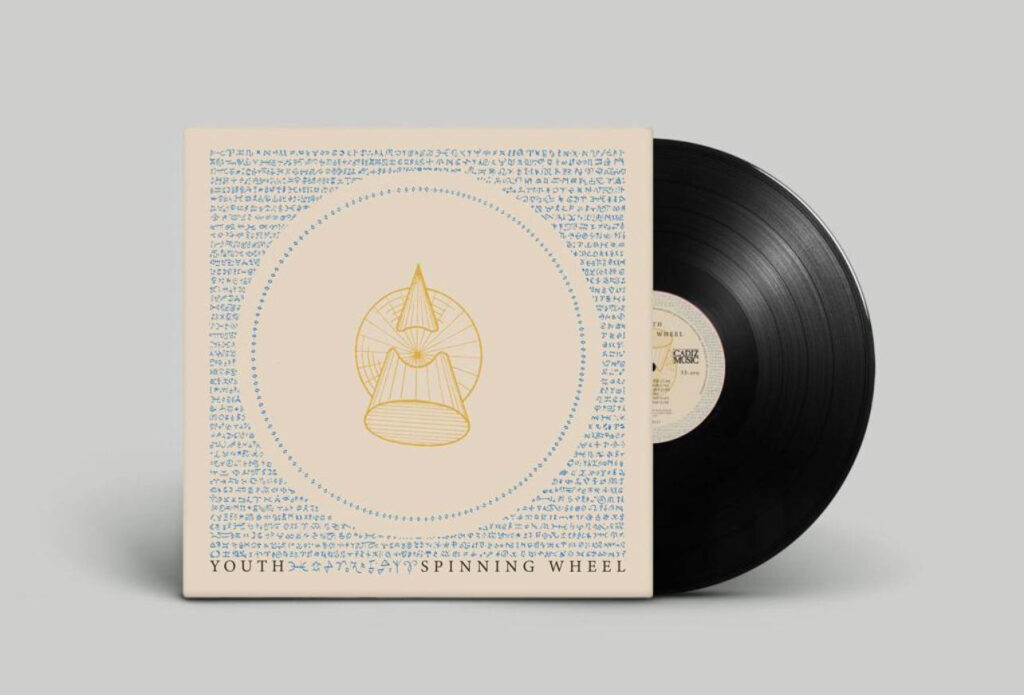 Free from all other associations, now Youth releases
His first solo album, opening his heart and past for a future
In a selection which mixes Monkees like moments
With shades of Johnny Cash, Jilted John; not to mention
The Doors and the sweetened swish of the Velvets,
And the gentle grace of Tims Hardin and Buckley;
With each chord catherdral he seems to congregate

Holy songs. Title track Spinning Wheel rolls him straight
Into the heartland of the ballad. Over his dexterously played
Acoustic, he sings for the first time in a yearn spun,
High, lace like voice that sounds like a loom has threaded
Him into being as he sings of red and gold skies above him
And the sky making naked the still sheltering soul
For whom the fabric of freedom can at last bestow choice. Youth plays all instruments, with guest spots from
Simon Tong and Violinist Jerry Driver. David Nock’s drums
Also feature, as does Samantha Marais on BV’s.
But this is Youth now for all time and for the first time
As frontman, sat by the fire and spinning his words
To appease. Wooden Floor briskly scores the teenage
Doors he once walked through, in Earls Court

(as he told the tale at The Troubador album launch)
And with Alex Paterson as his roommate, before success
Settled in. It is a sharp and sexualised interlude
As he details their respective encounters either side
Of the bookcase where women lay to ‘Spill wine
From my mouth ‘ for love’s  win. Chariotte Says
Says a lot about an early love and adventure,

As they ‘pop a pill, have a party’ or lay down and play
‘Like cats and dogs on the carpet floor.’ The Runaway end
Is ecstatic and anthem like, a drug score. As is Pure, with
Imperative the narcotic as you ‘kill the beast inside your heart’
And ‘lose yourself in her fire,’ The dark of desire and a scent
Of myth to the music makes the listening heart crave for more.
Basslines take a backseat for one of music’s best bassists,

As the crafted songs and production of this LA Canyon
In Clapham by way of Cadiz starts to stun. There are Mazzy Stars
In this sky, as well as Syd Barrett, Leonard Cohen and Stephen
Stills humming the beautiful mood Youth’s begun. Each song
Sets a scene, smoke fused and golden,  the Be Pure refrain
Haunts you as night and day now combine. Play these songs loud
And the land shifts beneath you, the tremours of inspiration

Shake to make water in laughter and tears flood the mine.
Songs styled by light quickly alleviate shadow, while bringing
Mist and soft whispers to the blisters and burns dealt by time.
Charcoal Man banjos in with its loneliness portrait,
And its fairground fandango at the midway point is indeed
Startling, while That’s The Way playfully soundtracks seduction,
As its smooth verses sample with a kind of cockney appeal

Fun and sin. The songsmithery shines, as original as it is
Reminiscent, and Shaa Laa Laa–I Love You is 1966 to perfection
For 2022’s need for change. Songs become summonings.
And this particular chorus seems captured from a better time
In our past that Youth as artist and producer joyfully comes
To arrange. And so he rolls the dice from this unexpected
And gloriously surprising direction, coming with fresh colours

In which the dare and the dye has been cast. Hear The Dolphins
Shimmers through like light on sea’s surface, as ‘her dress moved
Without restriction ,’ and the swaying sense to the singing
Ensures that the woman walks on the water through which
Love’s ease swims with peace;  while The King of Losers  upends
That particular piece of contentment with a classic chord pattern
From which uplift itself is released. While the lyric burns bridges

Down the aspirant soul remains rising. And Smiling’s ‘Cold mouth
fierce flower’ also contrasts with its tune. And this is how real music
Is made, by counterpointing dimensions. A pumping squeezebox,
Determined is like Frank Tovey’s Sam Hall spitting runes. Final song
Close My Eyes is both classic Rodriguez, as well as Youth fusing Dylan
And Lennon with McAloon and Costello to ‘close the door on fantasy.’
Send knowledge to the stars,’ and ‘close his eyes to think of you.’

Which is what will feel true as pleasure is drawn from this bounty,
Of personal anthems, treasured for years; listen, glisten
And then you will know what to do, as the Rockstar reveals
And revels in his beginnings to sing of the progress time
In its spinning and its wisdom like wheel now accrues.
There is Youth’s life in here as well as the mystery
We’re all chasing.  He plays his own heartstrings to help us.

Look, its so simple; sex, love and light form the clues.

View all posts by David →
This entry was posted on 12 March, 2022 in homepage and tagged David Erdos, Spinning Wheel, youth. Bookmark the permalink.