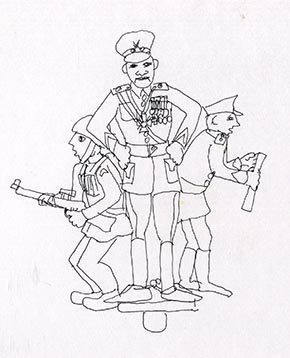 ‘I take the Military to be a form of clog-dancing,’
The Mister

The hierarchy of Military power has two arms. On the one hand there are the bureaucrats, and on the other those who order the actual killing.

The bureaucratic arm depends upon managerial, clerical and organisational skills, which at its peak can lead to a General’s stars.

The killing arm however, relies upon the willingness to condemn perhaps many thousands of their fellow countrymen to an often painful death without raising an eyebrow; and to this end any feelings of guilt for these atrocities must be regarded as shameful.

Red-tabbed officers of the General Staff click about in their high polished boots across the equally polished floor of the ancient château. They pass memos from one-to-another nodding their heads over them and exchanging significant looks. At the head of a long table stands the Commander-in-Chief. He stares with gimlet eyes at the map which covers the whole table top and points with his swagger-stick at a particular area.
‘This is where we’ll send the Norfolk and Sussex in,’ he says to a Lieutenant-General who stands at his side.
‘But that’s where the enemy is at his strongest,’ says the General. ‘They’ve got three divisions just there including a machine-gun battalion; our men will be wiped out immediately.’
‘I know that, George,’ says the CIC. ‘It’s just a minor diversion to pull in their reserves. Then we attack with our armour here,’ he points with his stick, ‘and here, with a good chance of taking this piece of high ground.’
‘Ah yes, I see,’ says the General. ‘And from there we can enfilade their whole front.’
‘You’ve got it, George,’ says the CIC, ‘and we’re going over the top in two days time. Catch them on the hop you know.’
Now he turns to his aide-de-camp. ‘Right, send in General Wilson first will you.’

The aide clicks over to the door and exits the room to return a moment or two later with a middle aged General, who walks up to the table and stands waiting for the CIC to speak.
‘Good morning, Wilson,’ says the CIC breezily.
‘Good morning, sir.’ Although the General carries himself with the expected military bearing, there is a certain deference in his tone.
‘Well, General,’ says the CIC. ‘You must have heard by now that we’re going for a big push in a few days, and as it so happens you will be spearheading it!’

The General looks several degrees more serious as the CIC explains the strategy and points to several locations on the map.
‘You’ll have command of the Norfolks and Sussex, with the Wiltshires in reserve,’
The General has gone very white; his eyes flicker across the map and he begins to comprehend the consequences of this action. He swallows and gives a nervous cough.
‘With all due respect, sir,’ he says. ‘But I must point out that my intelligence tells me that they have a machine-gun battalion defending that section of their lines.’

‘Well?’ says the CIC coldly, giving the man a suspicious look. ‘You will still have your reserves; the Wiltshires will go in straight after the first wave.’
Now the General looks even whiter.
‘But they’ll be wiped out too,’ he says. That’s over a thousand men I’ll be sending to a certain death.’ Now there is panic in his eyes. ‘I can’t just…’ He comes to a halt.
‘Can’t what?’ says the CIC, his voice is icy and the steely eyes flicker meaningfully across to his aide-de-camp who moves surreptitiously towards the door, and when he has gone a heavy silence permeates the whole room, even the scurrying of the minor staff-officers ceases and all eyes go the head of the table. A phone rings and an aide picks it up. ‘Right,’ he says, and turns to the CIC. ‘General Wilson urgently required in the Adjutant’s office, sir.’

‘Well, General,’ says the CIC. ‘Better see what he wants.’
‘Yes, sir,’ says the General weakly. He seems to have lost all his gravitas as he walks away through the silence; an aid opens the door for him and he is gone.
The CIC looks at his aide-de-camp and raises his eyebrows. The aide risks the hint of a smile.
‘Service Corps, sir? Or maybe Catering?’ He smirks.
The CIC turns to the Lieutenant General. ‘I’ll leave you to handle that, George. Probably best to send him home.’ Then… ‘Send in General Hoog.’ he barks.

General Hoog is a brisk man and there is no nonsense about his moustache. His hawk-eye takes in the room at a glance, and he stands like an alert gun dog before the CIC.
‘Ah, Hoog,’ says the CIC. ‘There’s a job for you here. Come and look at this.’ They bend over the map while Hoog is given the gist of it.
‘I see, I see,’ says Hoog enthusiastically. ‘Brilliant piece of staff-work I must say. Of course the Norfolk and Sussex won’t come out of it, but I might get some of the Wiltshires back.’ He looks hopeful.

‘What do you think, sir?’
He takes one look into the CIC’s eyes then…
‘Well, maybe not, maybe not.’

Tweet
This entry was posted on 3 July, 2014 in homepage and tagged 1914, dave tomlin, nick victor, War games. Bookmark the permalink.