A Day’s Walk around the Ginger Line Book Launch 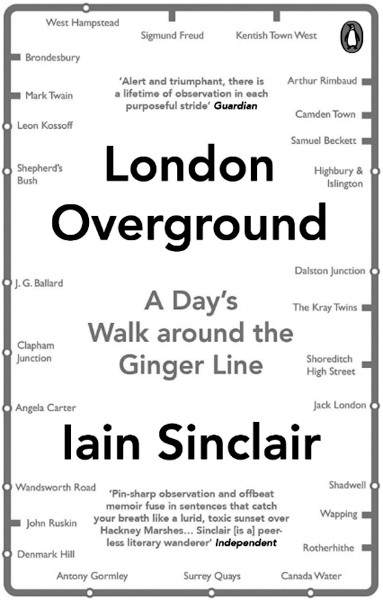 We are delighted to host the launch of the paperback edition of London Overground – A Day’s Walk around the Ginger Line by Iain Sinclair with work-in-progress screening of John Rogers’ film of the book.

Iain and John will present a selection of footage from the film with discussion and Q&A.

The film retraces Sinclair’s journey with Andrew Kötting around the Overground network over the course of a year rather than the Day’s Walk of the book. Iain is once again joined by Kötting, along with Chris Petit and Bill Parry-Davies on the 35-mile circular yomp.

“The completion of the full circle of London Overground provides Iain Sinclair with a new path to walk the shifting territory of the capital. With thirty-three stations and thirty-five miles to tramp – plus inevitable and unforeseen detours and false steps – he embarks on a marathon circumnavigation at street level, tracking the necklace of garages, fish farms, bakeries, convenience cafés, cycle repair shops and Minder lock-ups which enclose inner London.”

John Rogers’ previous films include The London Perambulator and Make Your Own Damn Art: the World of Bob and Roberta Smith