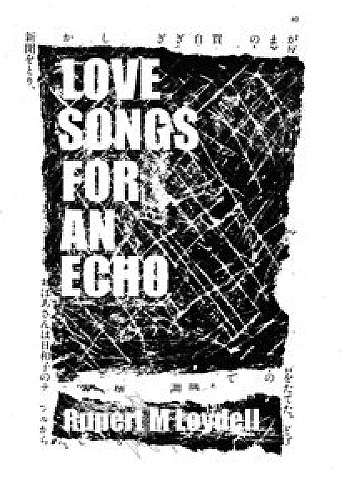 A REVIEW OF RUPERT M. LOYDELL’S ‘LOVESONGS FOR AN ECHO’

Rupert M Loydell’s latest chapbook is an elegant requiem for the forgotten sound of meaning between significant others. The songs of absence and dislocation to be found within take the form of a series of prose poems charting the possible decline in the fictionalised protagonist’s relationship and marriage, necessitating both regret and reflection in a series of pastoral settings subject to deterioration and leading to survival and a sense of renunciation. The flood or avalanche of memories (the title of this article stemming from the first line of the poem entitled, Ice Copy) are the core of the book, which knowing something of Loydell’s dedication to contemporary music, produces a folksome, even conceptual air, leavened by references to such luminaries as the progenitor of Ambient Music, (I recommend RML’s separately printed 8 Mesostics For Brian Eno heartily), Hiroshi Yoshimura, Mark Rothko and the band Earlyguard.

In referencing numerous musical styles and practises as Loydell does in his other work, this book could also be his take on Dylan’s Blood on the Tracks, as it rakes over the dead leaves of forgotten summers in the geographical and spiritual sense, evidenced particularly in No Engine of a Narrative ;

‘This is not the place I thought I’d live.

This poem is perhaps a little commonplace at times, but the air of dislocation is breathed anew throughout the book, as in the one line Poem;

The Legacy of a Dream;

An empty lexicon. I don’t remember. Part of us will never be.

The echoes that we are all subject to, house the unanswered questions, the recriminations, the doubts, if you will, that blight us all and Loydell submits them to a useful scrutiny. He directs our attention to the surrounding air, encouraging us to examine all that we take for granted. In the brief poem, Blink, he asks us ‘What is there to see or understand?’ and therefore accomplishes the aim of all art and writing: to fuse the practitioner with the recipient, calling for their direct engagement and solidarity, in a simple, direct and poetic manner, separate that is, to the specific demands of poetry itself. Poetic impulse is the point here; the observation and philosophy that occurs when the terrain of the heart has been rescinded or broached. In this volume that impulse and desire is shown as something to be shared and as a place where those not as well versed in literature as Loydell is, can find a satisfactory summation. That RML breaches and bridges the forms is proof enough of his skill and allows the poetic thought or observation and the structured poem to co-exist. He reflects this literary marriage between head and heart for the reader (if not between man and wife in the implied story) in the rolling stream of everyday imagery used in the opening poem One of Those Days:

or Clouds’ ‘Vacant sky. There is nothing to make sense of in our monovision world.

A partial eclipse is not the same as temporary blindness..’

Showing how we are able to re-imagine and re-interpret the world after heartbreak or pain on any number of levels, even as failure and/or disappointment robs us of perspective. The pieces, therefore form a progression, a narrative of sorts, an implied concept, as I have suggested that demystifies the process of art while at the same time securing its accomplishments. The Nine Postcards sequence uses artful and affecting imagery, such as the aforementioned ‘Cold ghost Avalanche,’ or ‘Madness is a medicine,’ or ‘Let it rain. Let us navigate the heavy seas of love..’ to make its points but does so in an understated and relateable way. Modernist poetry often squeezes the wounded thought to produce a haemorrage or (sometimes) clot of language, but here Loydell draws attention to what most people envisage a poem to be. He then adapts it into the poetically infused prose of the journal or dream diary. His pieces, in transposing these forms, seek connection and redress what we all know and observe around us in, if not new clothes entirely, then certainly in freshly laundered ones. He has allowed us to see some of his private fears and experiences (without implying this is any way autobiographical) while at the same time remaining in control. The sometimes conservative approach to language in other parts of the book conceals a darker fire and leads us to question all things that come before us, just as we are questioning those for whom we have lost devotion.

But more importantly, these prose poems shows the writer conversing, arguing and examining the facts of his/her and their detachment. The levels of despair are eased by a dignified and mature consideration of the circumstances that created them and deal sensitively with the speaker’s concerns as a constellation of emotions known to us all, forms his existant universe. Introspection expands into said philosophy and the hearts journalism creates headlines for reader and poet alike.

Saluting the Distance and Without Pity are powerful examinations of what the playwright Howard Brenton refered to as ‘the foul rag and bone shop of the heart’ in his novel ‘Diving for Pearls’ and the long poem near the end of the book, One and One, is a masterful marrying of man and his interior landscape to the environment within which he finds himself, from the ‘peculiar smells in the corner of the garden,’ through his favoured writers ‘orbits and circles..matters of belief and memory..’, to the phantom existence of an imagined pet dog. The idea of vanished worlds and shattered landscape both within and without , above and before us and him, is variated by a look at the tragedy of the diminished bookshop in the poem Fever, and Endless Trains takes us from Dartmoor, Italy and New York all the way to Agnes Martin via ‘Hungarian plum and honey spirit.’

Occasionally rhythms and image choices jar and a supposed flow is truncated but always with purpose and design. Its questionable whether we read poetry to collate the thoughts of others or to try and mirror our own perceptions, bit whatever the case, these pieces eloquently convey the power and conviction of this particular voice. Here you will find dedication and reference that will allow you to chart your own rises and descents. Poems flavour he air and fill the space within which they are encountered with brightly drawn feelings and the resonance of new silences. The reverberations of one heart to anothers, produces the echo shared by our common sympathies and the empathy we can show while reading and dealing with each other is another theme I detected on reading. If we can engender such thoughts with restraint and economy we are succeeding and elucidating the unversed and preparing the ground for greater and deeper investigation. As Loydell states in the final line of The Notes that We Hear, his tribute to the poet, David Miller:’ From the fragments of the world we make meaning, from the notes that we hear we make song.’

View all posts by David →
This entry was posted on 21 April, 2016 in homepage and tagged David Erdos, Love Songs for an Echo, Rupert Loydell. Bookmark the permalink.