The Tories, Brexit and the English people 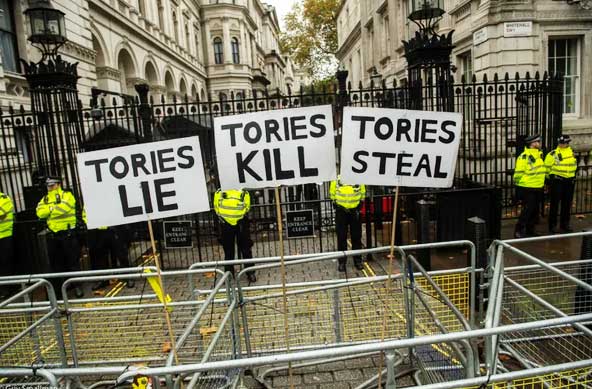 The Trussterfuck didn’t last long but the impact will linger for a long time. Rishi Sunak is now prime minister and things appear calmer. How could they not? But the appearance won’t last. The Autumn Statement is coming, and with it tax rises and public spending cuts. More strikes are on the way with civil servants and even members of the Royal College of Nursing opting to add to the already established string of disputes. Sunak has already had to let one of his key appointments, Gavin Williamson, resign after he was accused of bullying, including the suggestion that he told a senior civil servant to go ‘slit your throat’ and ‘jump out of a window’. The Home Secretary, Suella Braverman, remains in post, despite being appointed just six days after she resigned from the same position for breaking the ministerial code. Things appearing calmer is entirely relative to the preceding six weeks of Truss rule. It is worth noting that Sunak has inherited a divided party with no hint that he has yet solved those internal issues.

It does, though, provide us with breathing space to try to make sense of all this. It seems to me that our politics has been, for a long time, dictated by a three way relationship. Our politics has followed around the relationship between the Conservative Party, Brexit or the European Union in general, and the English people. I have chosen the English specifically because the relationship between them and the Tories is exceedingly important. The last time the Tories got more votes than any other party at a general election in Scotland was 1959. The Welsh people have never voted for a Tory government. If the UK has to suffer Tories in power, then, it is usually because of the English.

The Tories came to power in 2010, as part of a coalition between David Cameron’s party and Nick Clegg’s Liberal Democrats. In England the Tory vote was 39.5% and enough to secure 297 English constituencies (with 326 as the winning post). Importantly it was the largest of any party, putting them in pole position for forming a government. The English people were vital in securing this slender victory by buying into the ridiculous arguments that Labour, under Gordon Brown, were responsible for a global banking crisis. They further fell for the ludicrous idea that this banking crisis could be solved by austerity. Instead of trying to rectify the problem at source, Cameron and his chancellor, George Osborne, convinced enough of the English people that closing local libraries and decimating other public services would do the trick. Elections are often settled in less than one hundred constituencies so it doesn’t actually take much in theory to swing things. The Tories are extremely adept at getting enough support. There are, in other words, enough people in England to give them a fair hearing, even when they are talking utter rubbish and offering to harm the people they are appealing to. The media does a fine job in making sure they seem sensible and managerial whilst deriding left wing policies as extreme, when they are actually rather moderate.

Sections of the English population have been very pliable when it comes to immigration. We cannot divorce immigration from the EU and the issue of Brexit, as the referendum result to leave the EU was widely interpreted to be about just that. We now have the bizarre situation that the government wants to continue to be tough on people arriving to the UK (again actually England on the whole), while business leaders, even those that supported Brexit, are complaining of a low workforce and calling out for more people to be let in. As Brexit ‘got done’, the Tories became ever more UKIP like and the sections of English people that followed them expect them to get control of immigration. ‘Taking back control’ became a mantra for the Brexit project. It is likely that people feel less in control over their lives now than they did but it is also unclear whether they will punish any specific politicians for these feelings.

Europe was a problem for the Tories decades before the Brexit referendum. Divisions within the party, particularly evident during the 1990’s, were the reason for the referendum. As UKIP rose under Nigel Farage, the calls on the backbenches of the Tory Party for the UK to leave the EU also rose. David Cameron was arrogant enough that he could win a referendum and unite his party once and for all. It’s easy to forget that just a few short years ago, the Tories were not a fully fledge Brexit supporting party. They wanted a different type of Europe, not to be cast away from it completely. David Cameron’s gamble misread the sentiment of the English people this time. It was a finely balanced result but became presented as a clear mandate for the UK to leave, sowing further division in Scotland where there was a clear majority to remain.

England, the Tories and Brexit will continue to dominate UK politics for some time. For lasting, progressive change within the confines of establishment politics, the reaction of England to the ongoing crises will be pivotal. I’m not remotely convinced by Sunak’s abilities as prime minister yet. He seems a lightweight, out of his depth so far. He and his supporters cling to the idea that he was responsible for the furlough scheme during Covid lockdown and therefore he has proven himself. It’s pretty much all they can point to. Never mind that many countries were also taking the same practical measures. Sometimes prime ministers grow into the role by proving their critics wrong, or just circumstances improve around them and they look better. It is possible that Sunak could develop in the role. It is possible that enough people in England will feel positively enough about him within two years for him to win a general election. It seems unlikely.

When it comes to non-establishment politics, Just Stop Oil are getting all the headlines. It feels like they are the only show in town. I’m tempted to mention the wave of strikes but I think we’d have trouble painting most of these trade unions as anti-establishment. They are playing their part in the establishment battle over the running of the economy. It is a battle they will want to end in a Labour government and the hope of nicer, fluffier legislation regarding strikes. Just Stop Oil is admirable for their refusal to kowtow to debates about tactics. As I write this, a stalling of their actions that have disrupted the normal (not so smooth) running of the M25 is in place. Their own press statement highlights that they have stalled to allow the government time to think. It suggests there is more to come. There should be much more to come, on this and many other issues.

The Autumn Statement is going to need Sunak and his chancellor, Jeremy Hunt, to perform the same trick that Cameron and Osborne did in 2010. While Brexit didn’t really get done, while the economic hardship of many remains and cuts deeper than last time, what will really matter is whether the English people will be fooled again.

Tweet
This entry was posted on 17 November, 2022 in homepage and tagged Guy Smallman, Jon Bigger. Bookmark the permalink.