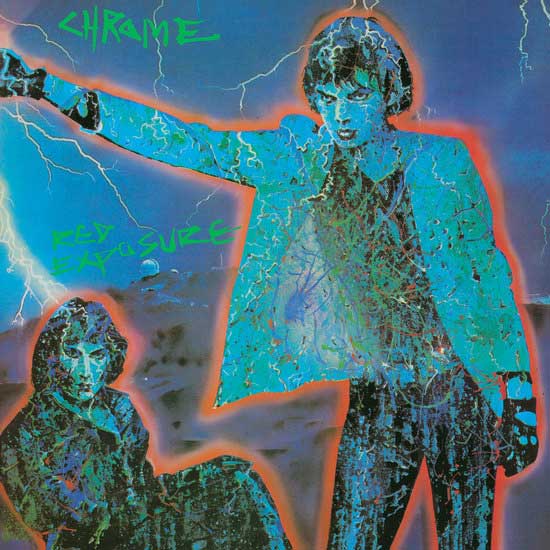 Formed in the mid-70s, the original incarnation of Chrome, formed by Damon Edge, recorded 1976’s The Visitation, a trippy, bluesy album that only hinted at the greatness to come. I actually love it as an album, but it’s not really Chrome; they didn’t exist until guitarist Helios Creed decided that Chrome needed him, whether they liked it or not. It was the nucleus of Edge & Creed that would be mostly responsible for a run of stunning albums that put Chrome on the map, particularly in England and Germany, where post-punks, old hippies, indie-rockers and sonic explorers would all embrace the band’s music.

Their next album, Alien Soundtracks, was actually a gathering-up of an aborted pornographic film soundtrack and outtakes from The Visitation, woven together with distant voices, drum machines that sound like gunfire, and layers and layers of additional sounds, all fading in and out, busily panning across the stereo field. And if that wasn’t weird enough, Half Machine Lip Moves upped the ante even more: this record is even louder, weirder and stranger. There’s more feedback, more demented metallic drumming, more fragmentation, and an insistent cyberpunk/horror theme running through it all. Tracks like ‘TV Eye’, ‘Zombie Warfare (Can’t Let You Down)’, ‘March of the Chrome Police’, ‘Zero Time’ and ‘Critical Mass’ mix Cold War paranoia with the overcrowded future worlds of Soylent Green and Bladerunner, conspiracy theories and sensory overload with bad trips and drug-fuelled dreams.

Those nightmares reached their ultimate fruition on the band’s Read Only Memory 12″ EP, which came clad in a grey collaged sleeve with pink highlighter amendments, and a similarly strange fold out poster. In just over 20 minutes (it seems much longer) it is, as The Seth Man’s review on Julian Cope’s Head Heritage website says

set several steps beyond into alien territories of riotous interstellar pulses,
abandoned synthetic treatments, shards of broken guitar FX and collages
of Edge’s tape-recorded nighttime obsessions. It’s damaged, distorted and
disembodied beyond belief as the wormholes in the sonic fabric just keep
opening up and closing down without warning while a persistent backing
(and backwards) rhythm track just keeps nudging throughout at
inconsiderate intervals.

Playing with backwards tracks, loops, strange layers and juxtapositions, Read Only Memory remains both the band’s most far-out statement and also the pinnacle of their career. Nothing else comes close. 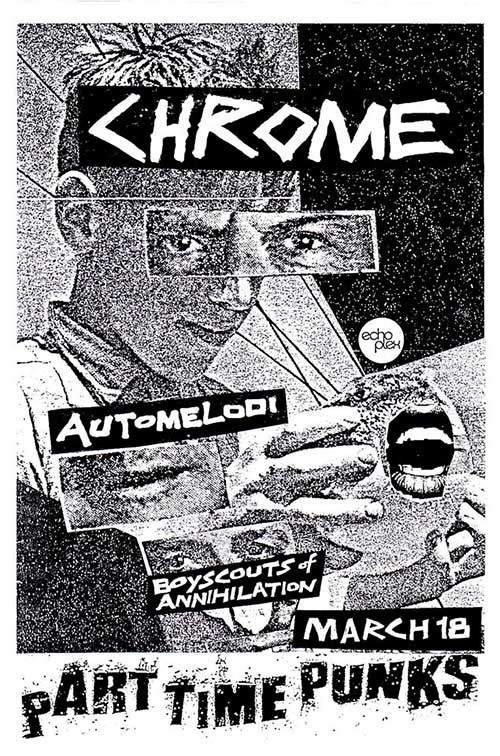 The Half Machine Lip Moves album actually shifted units and got good reviews, which attracted the attention of record companies such as Britain’s Beggars Banquet, who signed Chrome, presumably without hearing Read Only Memory! Red Exposure, the first of only two albums for the label, offers up a subversive set of better produced tracks, which offer some semblance of song format (things like verses and choruses) and pretends to be a (very) distant cousin of the most out-there new wave music. Having said that there were still the usual strange and inexplicable samples, muted vocals, degenerate guitar solos and an overall sense of musical dislocation and deconstruction.

It is this 1980 album that has got the remastered deluxe reissue treatment from Futurismo. Although there’s a CD digipack reissue with a bonus track, what you want is one (or all) of the three different coloured vinyl editions, which come with a neon poster featuring previously unseen photos, wrapped in a gatefold sleeve printed on heavy mirrored card, which only adds to the strangeness of the original Pollock-esque band images.

The album kicks off with ‘New Age’, which features a relentless marching beat with drums to the fore, and only hints of splintered guitar and some chanted voices to ease the tension, before ‘Rm. 101’ kicks off with burbling synthesizers which gradually give way to a gloomy keyboard fugue. Then the mood is shattered as ‘Eyes On Mars’ kicks in. Sounding as though it was recorded from the other end of the room on a single microphone, possibly onto a cassette recorder, it feels like the bastard mutant offspring of Motorhead and Hawkwind: distant vocals, jangling drums playing at double time, hissy synths and weedy vocals, with outbursts of whining, fluid guitar solo. It’s astonishingly disturbing, as is ‘Jonestown’ which follows, a brief evocation of the mass religious suicide at the People Temple’s Guyana farm.

Side 1 ends with the upbeat ‘Animal’, which pits garbled vocals against pulsing synthesizers, random noises, and needling guitar. The track simply fades out after 2 minutes, and when you turn the album over ‘Static Gravity’ plays the same trick in reverse, fading in before flanged bass or guitar booms and echoes over a riff-heavy guitar and a distant hypnotic keyboard sequence. The vocals here are declaimed, almost a foreshadowing of rap, but – as expected by now – only odd phrases come through in any clarity: ‘I see the future’ kicks the song off and there’s a muffled chorus too:

Clouds of sound perform a hypnotic dance as the chorus is repeatedly chanted. At only three-and-half minutes it begs a longer version or some sort of extended remix, but no, we swiftly move on to ‘Eyes In The Center’, another jaunty rhythmic excursion which eventually allows vocals and synthesizer noise into the mix. Four minutes in the intensity increases before the track executes a quick fade and we are faced with the babble of voices which introduce ‘Electric Chair’, a cheerful song of lust and torture, whose narrator is insistent that his victim loves the current and wants to fry. The upbeat and addictive perversity includes the obligatory acid guitar and distant speech, which is at odds with the natural sounds that kick off the next track, ‘Night of the Earth’.

Gradually, however, the animal sounds and tinkling piano are subsumed by whiplash synthesizer, layers of indistinct chatter and dark percussion. Just as the track builds sonically into a busy dark mood, it gently fades away before the final track, ‘Isolation’, arrives with a similar sonic stew that is soon ripped apart by, a monster guitar riff, pounding drums and (you guessed it) vocal samples. The intensity builds and builds, as does the highlighted guitar solo, before the layers are finally stripped back again to reveal the continuing babble of voices and muted drums before a swift fade ends the song and album. 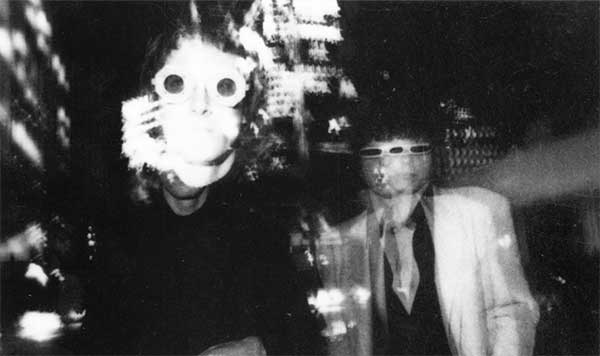 I’ve never thought of it before, but in a way this could be regarded as an ambient (or illbient) album, it’s certainly far more concerned with texture and mood than songs or rock music. Many of the tracks feel like tentative experiments or excerpts from longer jams, worked on and treated in the studio; for me, most of them are too short, and the whole album is only just over half-an-hour long. But if I don’t agree that it’s their ‘greatest work’ it’s certainly up there with the best. This incarnation of Chrome would go on to make two more albums before Edge and Creed fell out, with Damon Edge moving to Paris and using the band name to issue loads of albums that were more space-rock than experiment. After his death in 1995, Helios Creed picked up the baton and reformed a version of Chrome with some previous band members. Their music is much more what I expect from Chrome, and I recommend 2014’s Feel It Like A Scientist and 2017’s Scaropy.

In retrospect Chrome had far more influence and effect than anyone realized at the time. When I was at college in the early 1980s, the home-tapers and post-punk bands I got to know were listening to Cabaret Voltaire, Hawkwind and Chrome. A heady mix that produced a potent and lively music scene, unafraid to use and abuse sound material and ideas from all sorts of sources and genres. Let’s hope this reissue is just the start of new exposure and more acclaim for Chrome.

More information about the Red Exposure reissue can be found at https://www.futurismoinc.com/category/releases

You can read The Seth Man’s full review of Read Only Memory at https://www.headheritage.co.uk/unsung/thebookofseth/chrome-read-only-memory

A selection of Chrome albums are available as digital downloads at https://chromemusic.bandcamp.com/music

View all posts by Rupert →
This entry was posted on 19 November, 2022 in homepage and tagged Alien Soundscapes, Chrome, Red Exposure, Rupert Loydell. Bookmark the permalink.