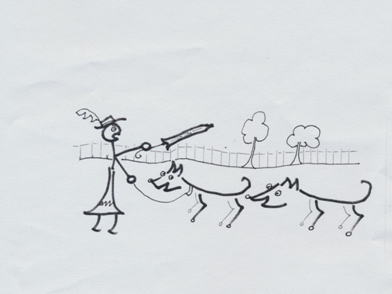 Newspapers report that scientists want dog owners whose pets do not chase their tails to take part in a study. They want to work out whether dogs that spin round in this fruitless task suffer from anxiety or frustration at being unable to indulge in more ‘normal’ dog behaviour.

It is a sad fact that most pet dogs do not have a sex life. In fact it is likely that the majority of these poor creatures tugging away at their leads never, apart from the occasional furtive sniff, have a sexual experience in their whole lives.

One can imagine the response of the dog’s owner should their pet be approached in a suggestive manner by a dog of the opposite sex. ‘Get away you dirty filthy beast!’ he, or more likely she, will shout.

What a dismal life the poor creatures suffer.

And yet in that long-ago land of England, the inhabitants had the reputation of loving their four-legged friends, and every morning front doors would open to release their dog onto the street, where they would meet up with others of their kind and being free would go around in small packs getting up to all kinds of mischief.

But now in Ukayland it is rare, if ever, that one sees a lone dog going about its business, and as for love, to be constantly tethered to a lead smacks more of anti-sexual fascism and it is difficult to find a more cruel practice towards their closest friend.

Of course there may be ways to compensate these pets were their ‘owners’ to make a few minor concessions. For instance: A small area in every local park might be fenced off to provide a space for dogs to intermingle and fulfil their desires; say every Wednesday afternoon. Dogs might then be taken there and let off their leads to form all kinds of instant and interesting relationships.

However, there would certainly be protests regarding the numerous pregnancies which would obviously take place. Nevertheless, these complaints would be easily countered if the female dogs were put on the pill (since these would work just as well as with humans.)

Think how your pet would look forward with mounting excitement when Wednesday approaches once more, with tails furiously wagging and many excited barks when the day finally arrives, and much enthusiastic pulling at the lead as the walk to the park commences.

View all posts by David →
This entry was posted on 21 May, 2015 in homepage. Bookmark the permalink.