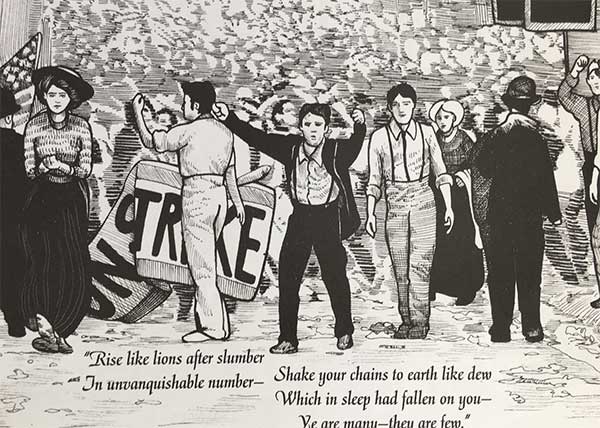 (after The Masque of Anarchy, P. B. Shelley)

I saw Poverty walk the land,

She had a mean and grasping hand,

And a face as pale as water –

And everywhere she went I saw

She left some homeless, others broke,

Many suffered when she spoke,

Barely bigger than a graveyard’s tombs

Workers once proud, eager to graft,

Reduced to idleness, made outcasts

By a system that’s a mess,

Given a dole that grew less and less.

That stood blackened against the sky

And filled with dread each passerby

Who beheld the terrible sight

And recalled the summer night

When many died in smoke and flame –

You’d think that she would die of shame.

And she led a murderous crew,

Who seemed to know not what they do,

Who bickered with themselves and fought,

Despite the press gang and the whip,

And were propped up by Orange Men,

Who had control of Number 10,

Despite the roiling Irish Sea,

Theirs the Magic Money Tree,

Who loved to walk her little garden,

To squeeze her heart and watch it harden.

And her lackeys stirred up hate

The denizens of the Fourth Estate –

Their lies the cause of pain and strife –

How they loved to twist the knife!

I saw Poverty, pale as Death,

A scythe held in her bony hand,

Saw her stalk this ruined land,

I dreamt she was Prime Minister.

And when I woke I feared it true

But we are many: they are few.

Tweet
This entry was posted on 8 December, 2018 in homepage and tagged John O’Donoghue. Bookmark the permalink.