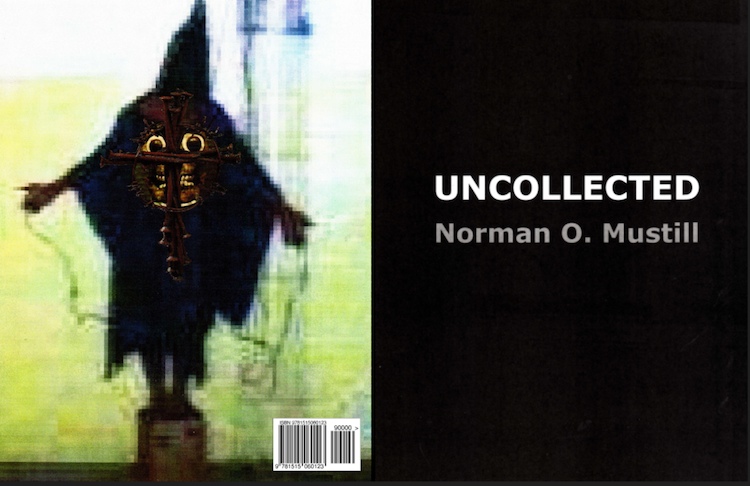 The pages of Uncollected illustrate the variety of the artworks that a little-known master artist produced over the years. Most of the pieces have appeared in scattered places but have never been collected in one place — thus the title. Norman O. Mustill, who died in 2013, also produced many other works that haven’t been collected or even seen by any but a few devotees, certainly not by art collectors. I’m thinking, for example, of the blazing series of riotous wall-size collages made of billboards fragments that hung in his California living room back in the 1960s and are now stored away in a shed in Arizona. None of this is an accident. Mustill refused to play the “art game.” Nor did any arbiters of the art world come knocking on his door, which is hardly surprising. He shunned publicity, guarding his privacy at any cost. You certainly won’t find much about him on the Internet. Less curmudgeon than extreme dissenter, he resembled William S. Burroughs in this respect: Nothing pleased him more than reaming out the human race. His compositions stopped you dead with their viciousness, not to mention their technical perfection and satirical intent. Which isn’t to say he lacked a lightness of touch. He could lower the boom playfully when he liked. Consider the “O” in Norman O. Mustill. It stood for “Ogue,” the middle name he took as a single-word manifesto against everything fashionable: Vogue – V = Ogue. If you were lucky enough to know him personally, as I did over many years, you’d find yourself chortling in gales of laughter. He loved to entertain his friends by taking note of the world’s solemnities and making exquisite fun of them. It was his supreme delight. Since so few people had seen his big pieces, I asked him to take some photos and send them to me. So he hauled a few out of storage, set them up on an easle, took a seat, and snapped a handful of time-delayed self-portraits. Here’s one: Norman O. Mustill with one of his wall-size collages. This self-portrait was taken in 2007.