A PENIS FOR CHRISTMAS 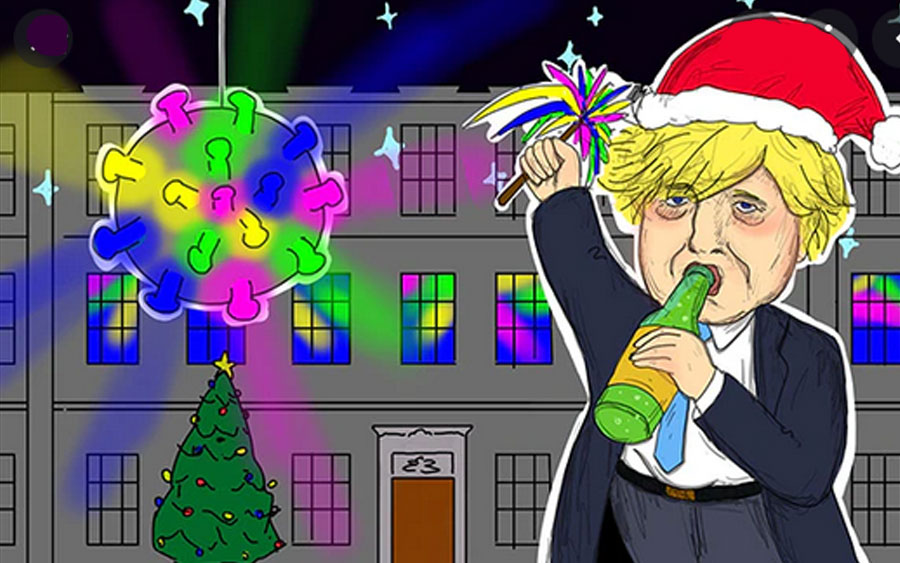 The predicted ice age did not come – although it was on the Daily Mirror
Website for god’s sake – and while reactions to news can’t be sacred
As there is no gospel truth to these times, the chill still persists
When considering the scourge of B. Johnson, a former euphemism
For penis who would fuck in a foul way to turn what language we have
To bad rhymes. This randy hound’s doggerel produces yet one more baby;
To the damnable devil a daughter to extend the dynasty he has bred;
One to rule over the earth and empire of ego he favours,
Built from the bodies and still tender bones of the dead.
He has been a joke for so long everyone knows the punchline
And yet they still tell it, while not swapping told tales for the fresh,
And he still gets to hold his undeserved place of attention,
Ruffling the hair as Ken Dodd did but with none of the charm.
His fat flesh still remains on our screens while Dodd and most  other joys
Have retreated, as evidenced by the parties and celebrations of self
That Boreis first hid and for which he then tried to be sorry;
But then a standing prick has no conscience  and a laugh too late
Strips the health from a restorative joke, or from a recovering time;
It falls hollow as does his tenancy within office and his residence
On the earth. A would be despot without the psychopathy maybe.
Although he has the detachment and the lack of concern for our worth.
So many lies, cover-ups, blatancies, obfuscations, and yet only now
Do we see it, or start to say what is seen; that unlike that sweet
Christmas treat this particular pig in his blanket strives only to choke us
So that he may cough once more through the screen, with the only
Proper language he has; those cartoon like sounds of bluster,
Hasty strokes that were tasty to the Brexit burned first of all
And before all the rest were promptly cast that fire, under his arson,
The shit he has stoked fuels our fall. But laughing at him does not help
As parodic ease only proves the lack of substance he offers,
Or, conversely how covers for what goes on beneath make us fools
Who do not know we are fucked by sharing the air with such people
Who work through our conscience like acid through drains
As hope cools. His numbers slide as his pink knuckles tighten.
What will he do; breed more babies to give the gullible public headlines,
While the party and parties go on, with or without our suspicion,
And the PM as penis makes a post mortem of sorts as fears climb.
Omricon. Babylon. Which is to be our next destination?
And who’s there to guide us; this one eyed trouser snake,
Or an Eve, or guileless Adam perhaps swayed by yet more
Temptations. Or will there be Noahs, with better ancient tales
To believe. The Woke will know. But what will they do to write them?
Stoke revolution, or fund a currency of care we have lost,
That will invest in new worlds requiring new recipes and concoctions.
Perhaps in cuddling up with the Quantum the price of an alternative
Earth is our cost. All we need do is stop, knowing that somewhere
Else it continues. Where men like him and the women, or the less
Than human crew on his Ark will not sail over us; instead,
They will be held accountable for their voyage. And where the proper
Paradise we seeking does not become their theme park.
This particular prick must be kicked, not into touch, but to darkness,
Both he and his cronies because of what it is they have done;
Which is to strip out the sense from even the idea of survival.
He is the real immigrant on her island as Johnson and Patel
Make hell home. Its where they want to roam and rule all;
Along with whoever else stains the sacred. So we must begin
A new Bible in which within snowfall the semblance of Spring
Seeds hope’s throne.
David Erdos December 14th 2021
.
Tweet

View all posts by David →
This entry was posted on 18 December, 2021 in homepage. Bookmark the permalink.