A Rallying Cry in Blackpool

Posted on 19 November, 2022 by Lawrence Freiesleben 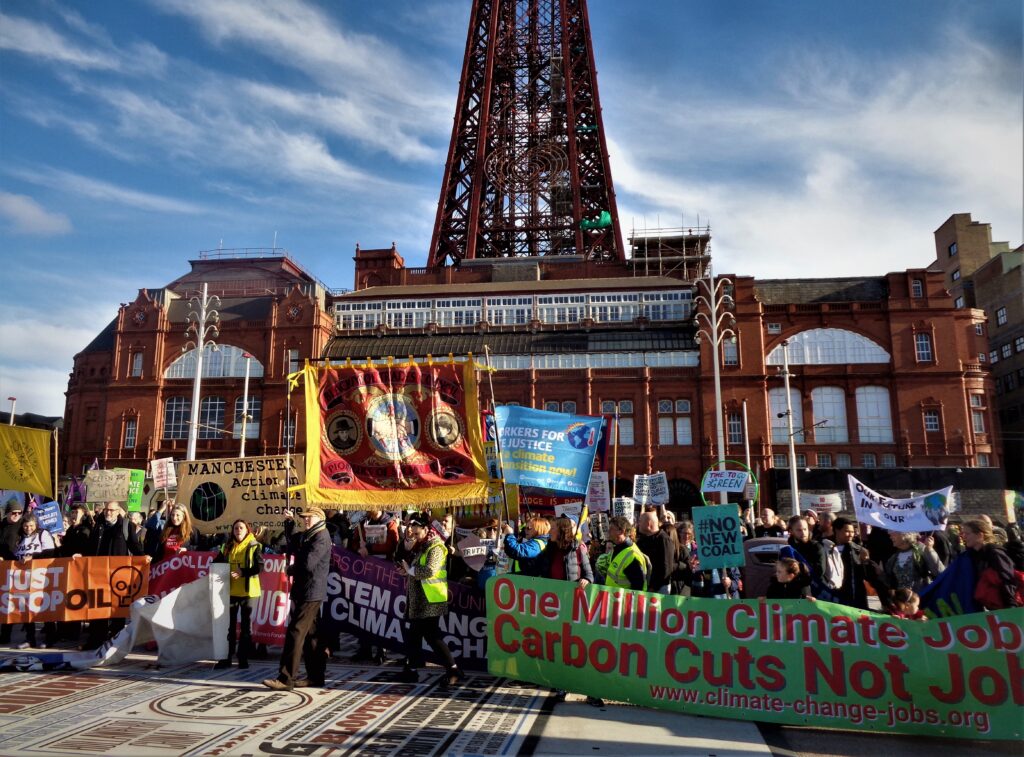 Near the end of last Saturday’s Cost of Living, Climate Justice & Health Justice March in Blackpool, a well-organised reporter asked if I’d be prepared to do a short, impromptu interview. I suppose, with my badge-covered jacket and RMT, “I support the Rail Workers T-shirt”, he thought I looked like I’d know what to say. 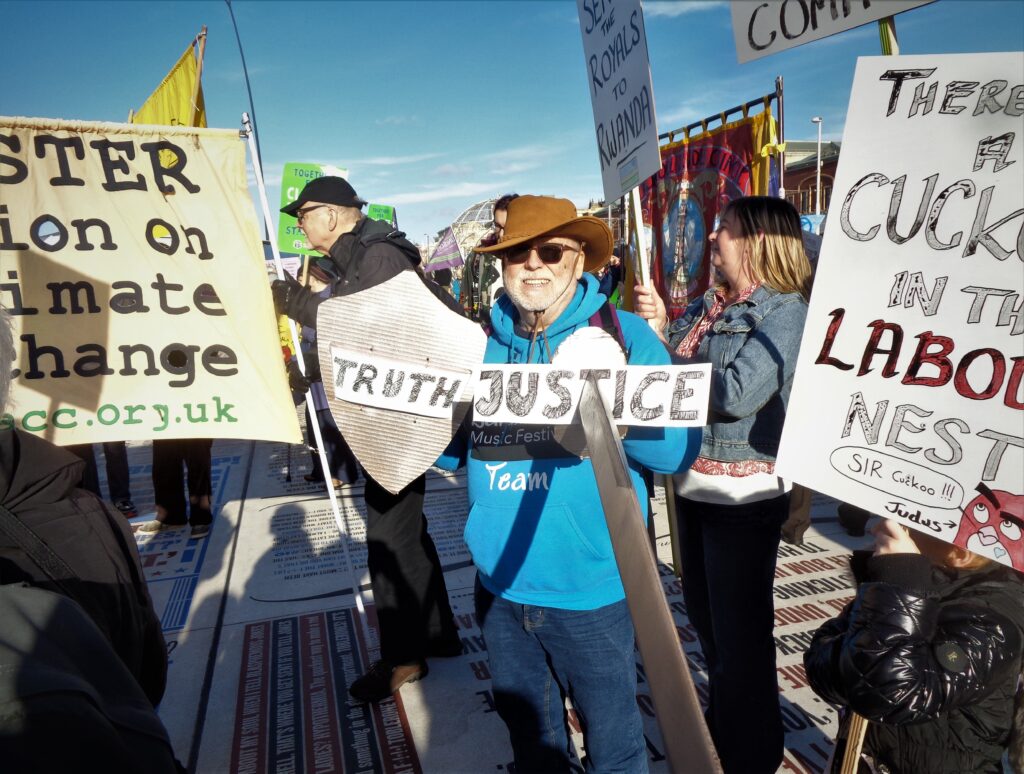 Truth and Justice ready to strike from the sunlight under the Blackpool Tower, 12th November 2022

My friend Chris joked that it must be because I “looked intelligent”. Chris would have been the better candidate for certain . . . but resting arms from the weight of his Truth and Justice broadsword and shield (made especially for the occasion, they were parked behind a low wall in shady St. Johns Square, as we ate our sandwiches and listened to the speeches), for that short while he blended more easily into the colourful crowd. The welcome and beautiful sunlight was now all elsewhere – on building façades as well as up in the sky around the famous Tower nearby and some were beginning to shiver in a chill November breeze. I kept hopeful that my no-screen-no-viewfinder camera still had space in its twilight memory. 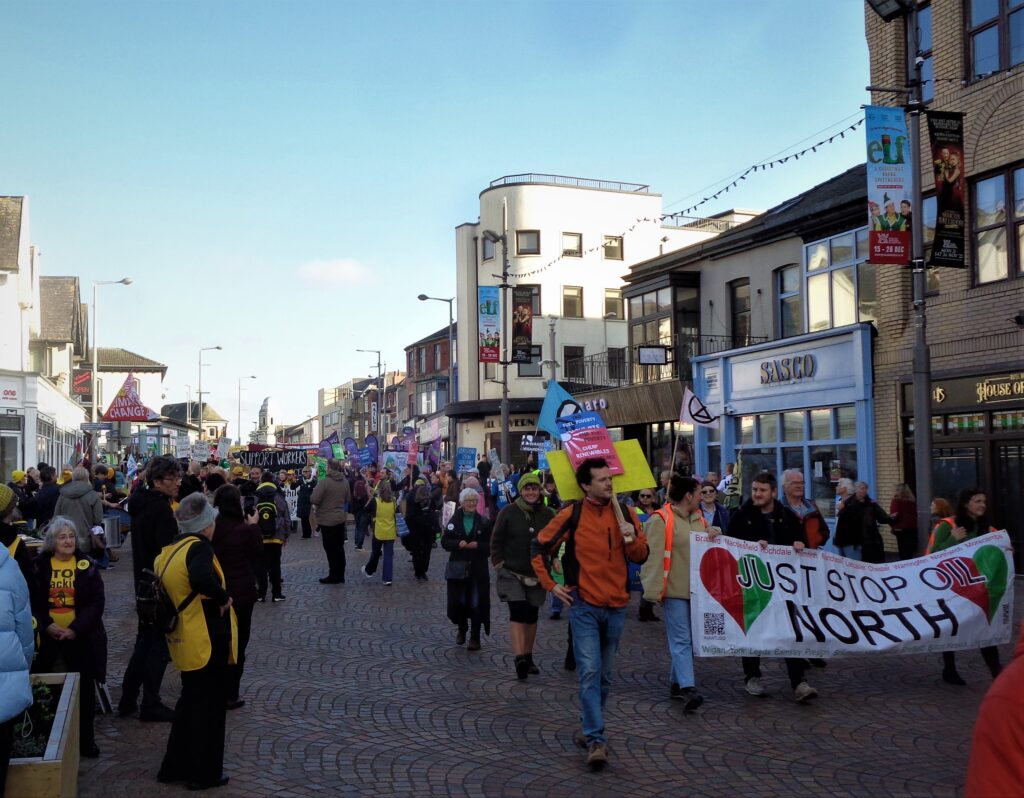 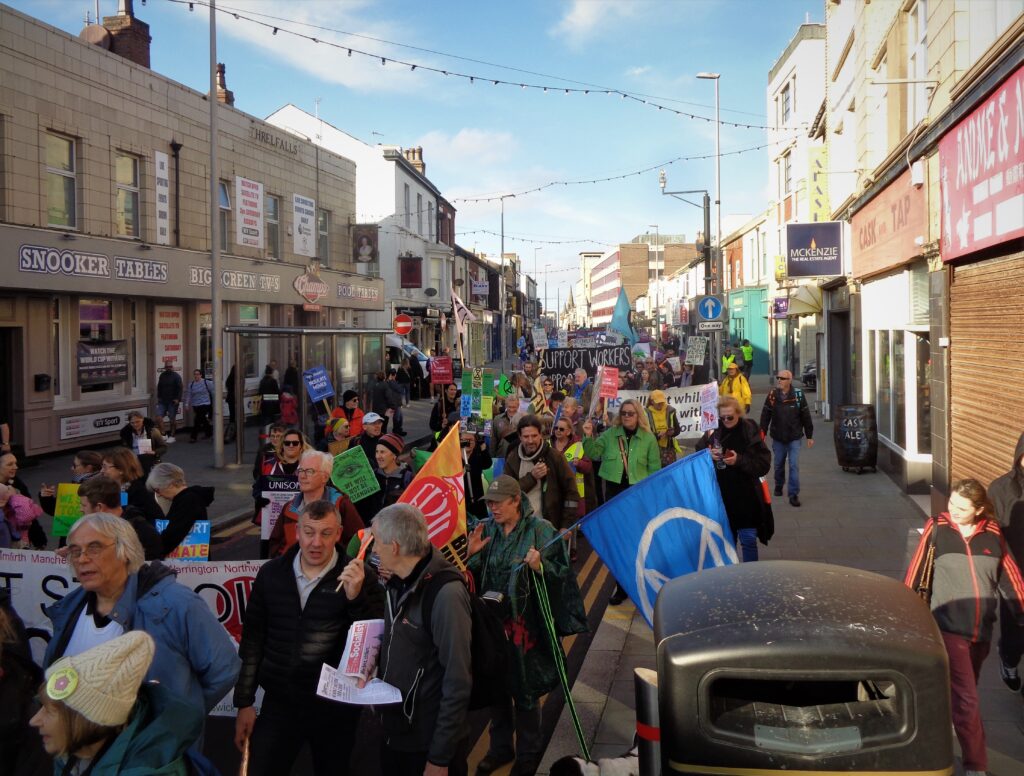 Had I planned and worried about such an opportunity beforehand – an interview about why I was here! – I could have whittled the issues to their finer points, gathered together some of the ever-growing reams of unarguable, supporting evidence, been filled with invective, and brimming with precision . . . and then forgotten it all anyway. 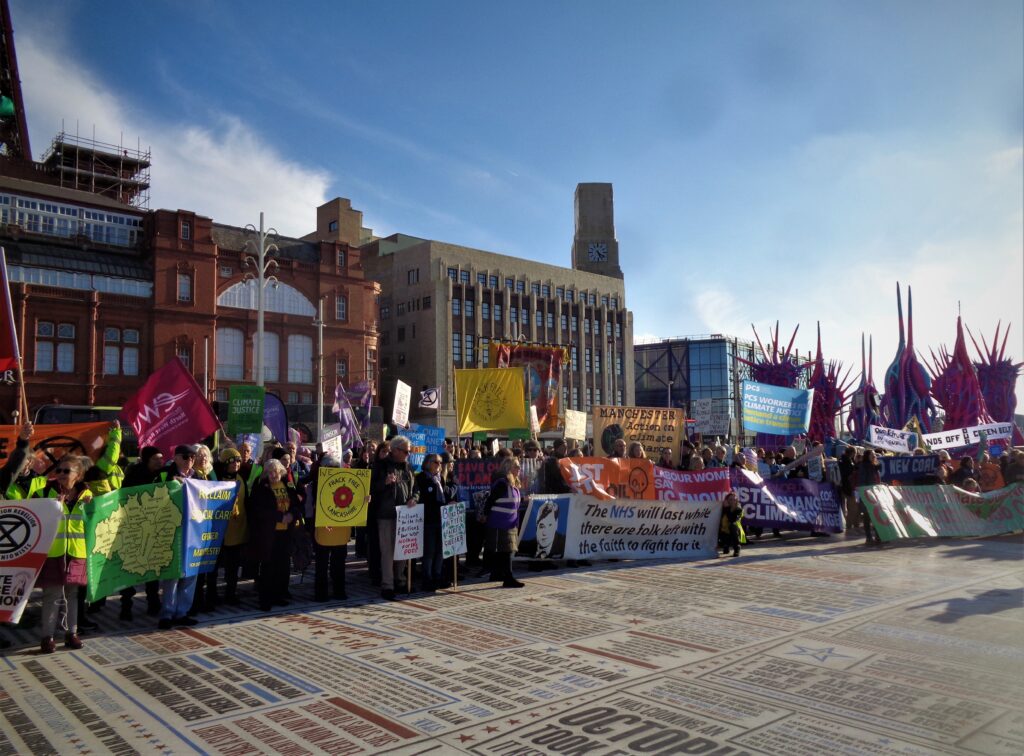 The huge alliance of groups gathers under Blackpool’s Tower with Nye Bevan[i] centre stage flanked (to name but a few) by PCS workers for Climate Justice; “Build Back, Better, Fairer, Greener,” and “£Millions for the Rich, £Billions for the War . . . Nothing for the Poor . . .” As it was, perhaps my delivery was just about acceptable – a façade of confidence – but I dismally failed to mention most of the things that needed to be said, rallying a shade at the end (at least in my fantasy) to emphasise the vital need for protest itself – and that no matter how draconian, how totalitarian the laws become, however much the Tories wish to be that “boot stamping on the human face forever”[ii] protest is NOT going to go away. The undemocratic laws enshrined in the Policing Bill are made to be ignored. 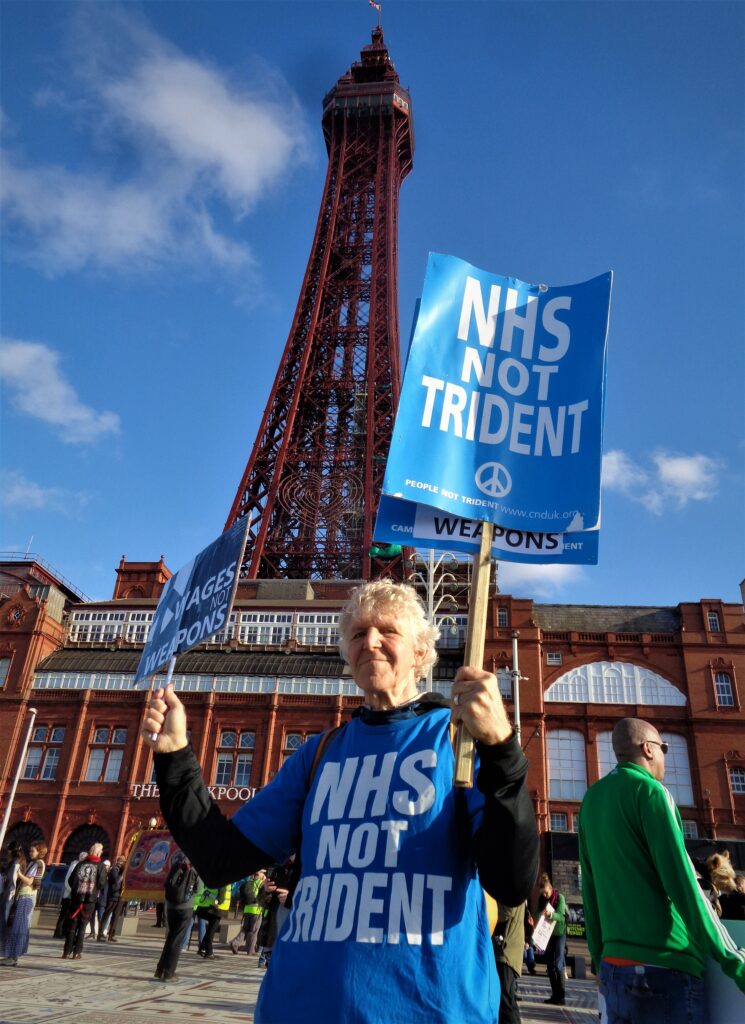 In reality, these days, given the immoral nature of our supposed “government’s” rampant self-interest and ineptitude along with its relay race of unelected prime ministers – that mix-and-match cabinet of billionaire’s puppets – it would have been difficult to mention everything. The issues are spiralling out of control. What is left for the Tories to sabotage or ruin? 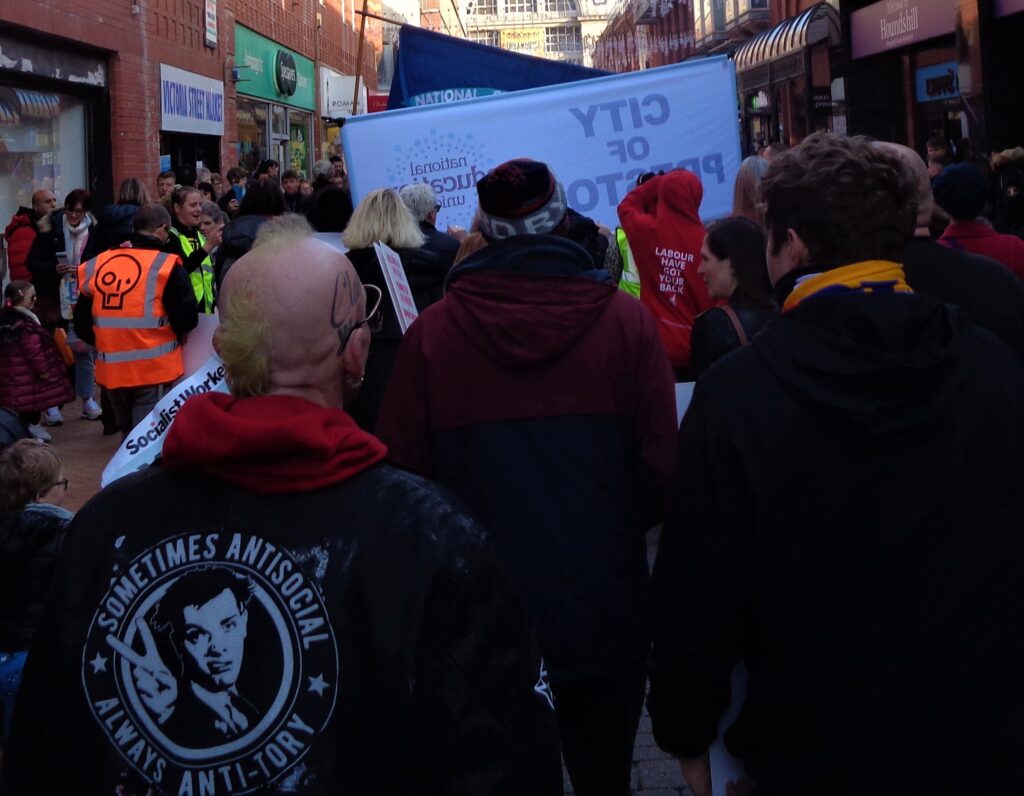 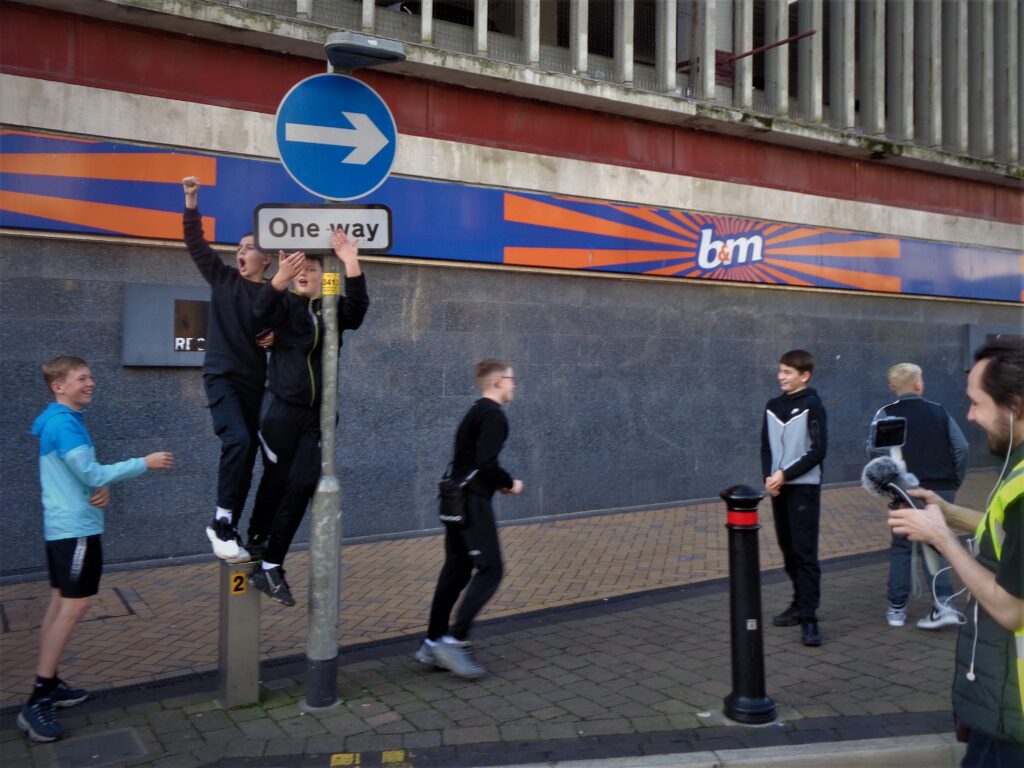 What can be equally worrying at times is that although public support is obviously growing, I would have expected at least the less wealthy of the “general public” (those of them who don’t really care or think about politics or the environment) to have been unstoppably anti-government by now – but it seems that the gimcrack goodies of technology[iii] and consumerism are still distracting enough to keep all too many of them in the regulated tuck shops. 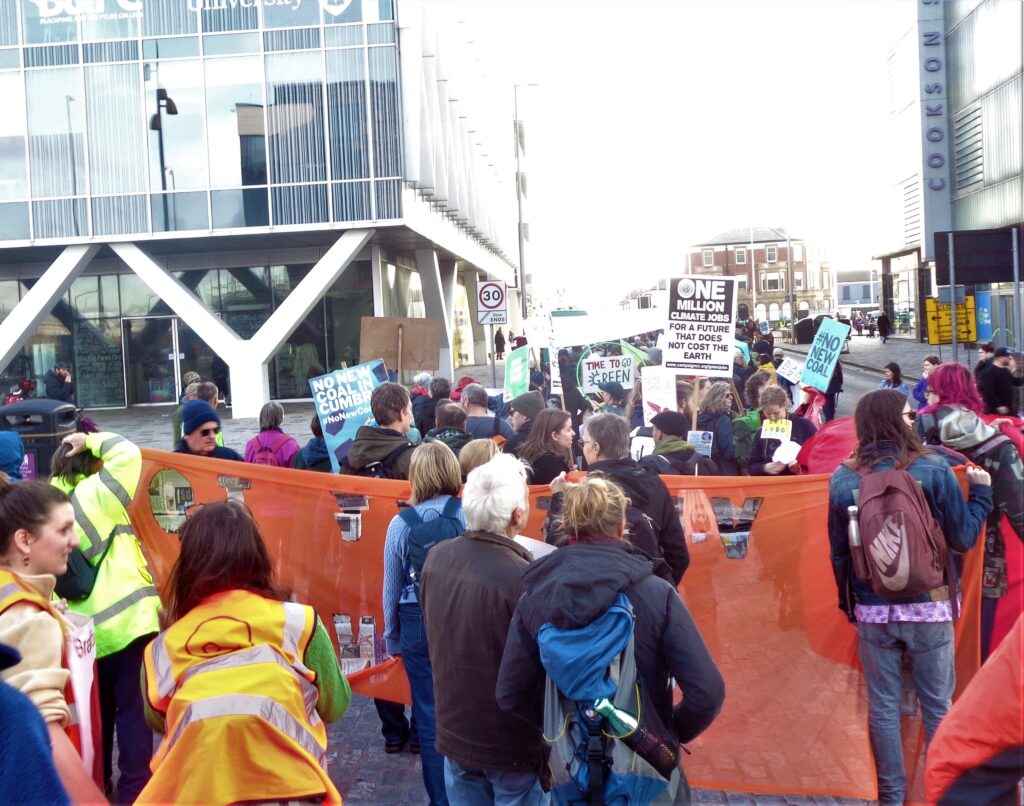 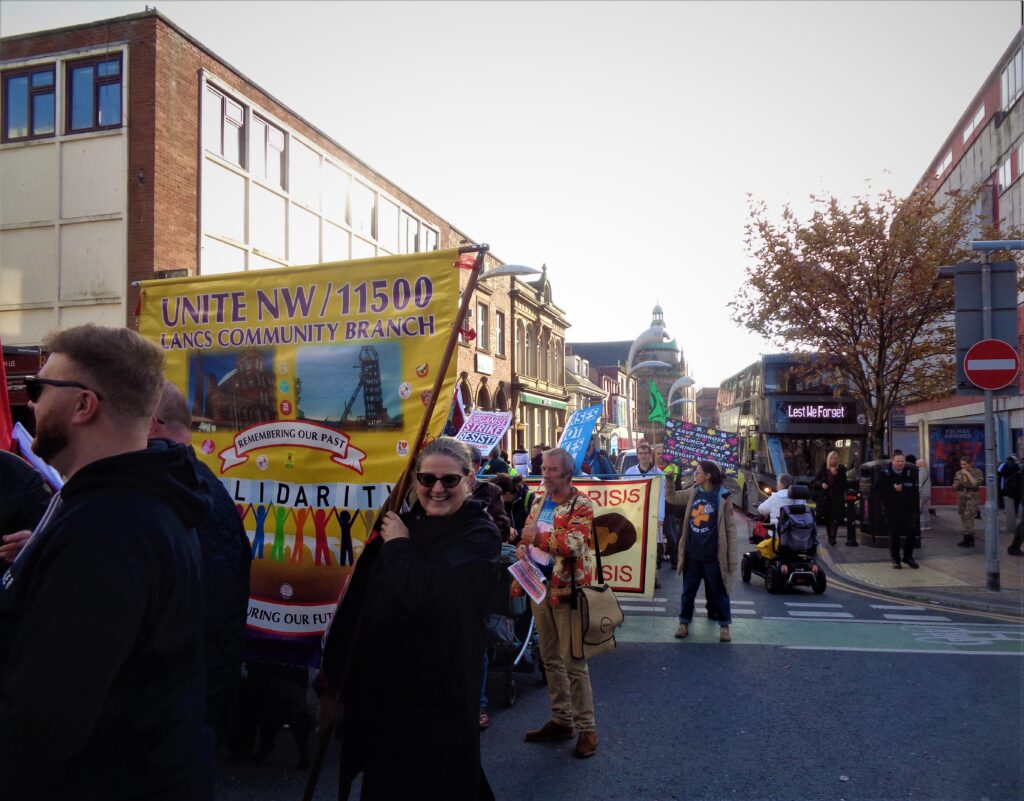 SOLIDARITY  –  Lest We Forget   (Abingdon Street from Talbot Road)

During the march, as we passed various pubs, I did hear some moronic, alcohol-fuelled objections to our protest, but generally the reception was good, if tending toward indifference – except perhaps among older members of the public, those more aware on a daily basis of the collapse of the NHS? 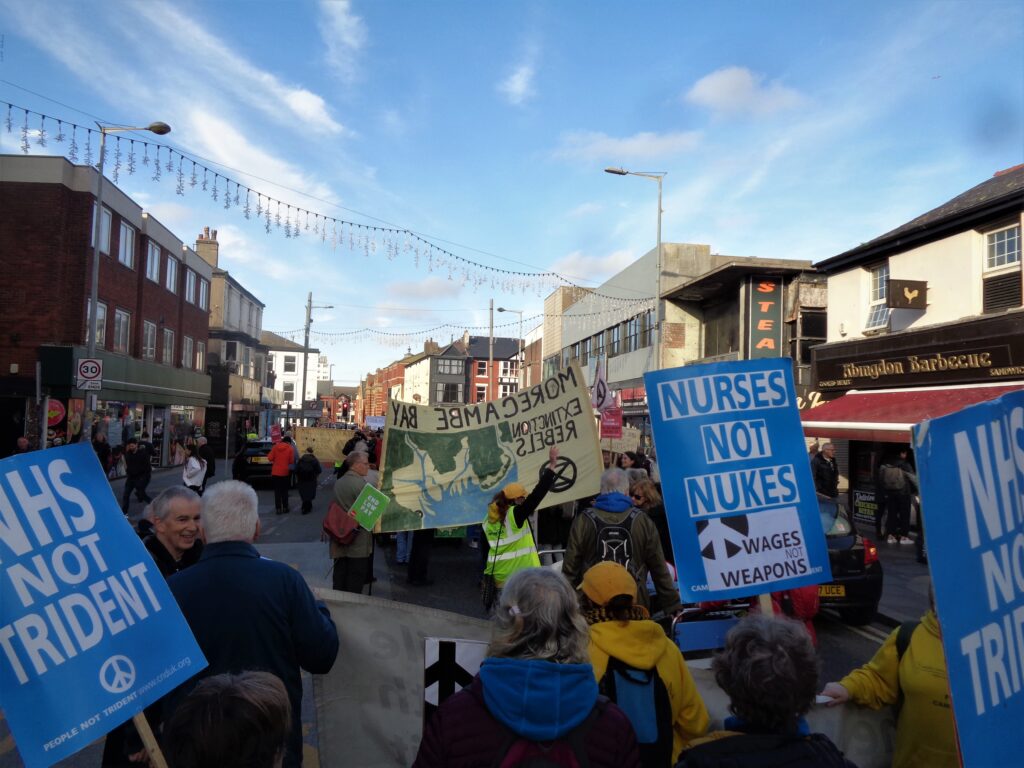 For the NHS was one of the most prominent concerns of the day and a popular one you would have thought. Saving the NHS wouldn’t be a cause you’d imagine many could turn their back on – unless they have started to blame the overstressed, underpaid workers and the funds-drained organisation itself, rather than a government with no need or care for it? 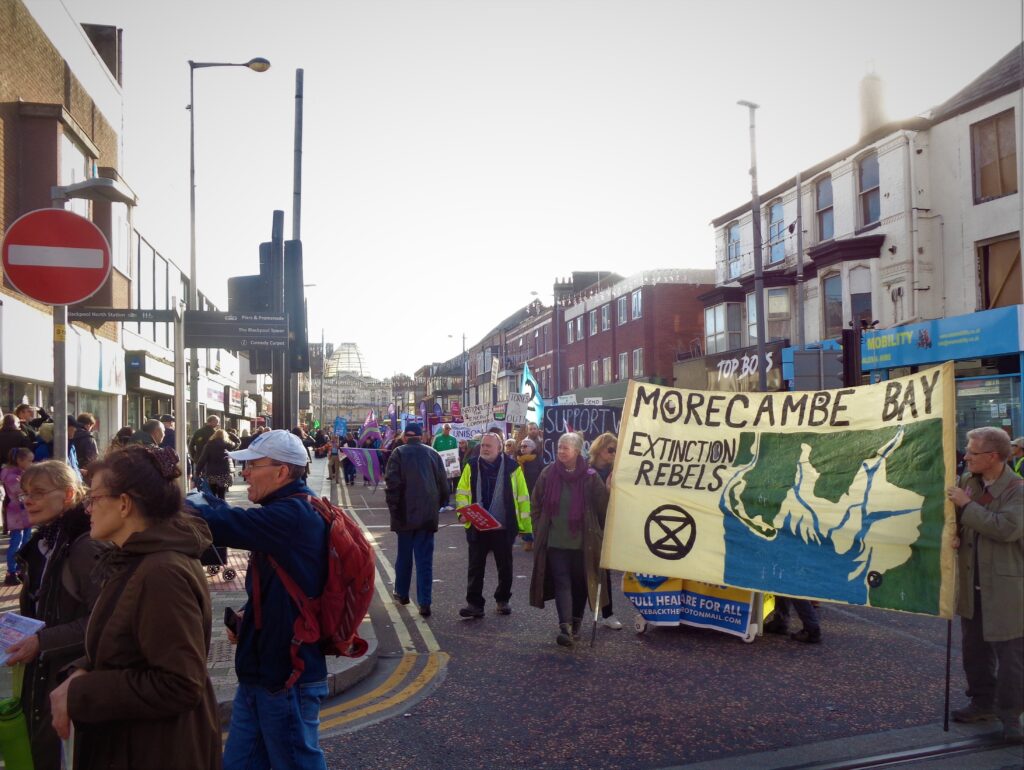 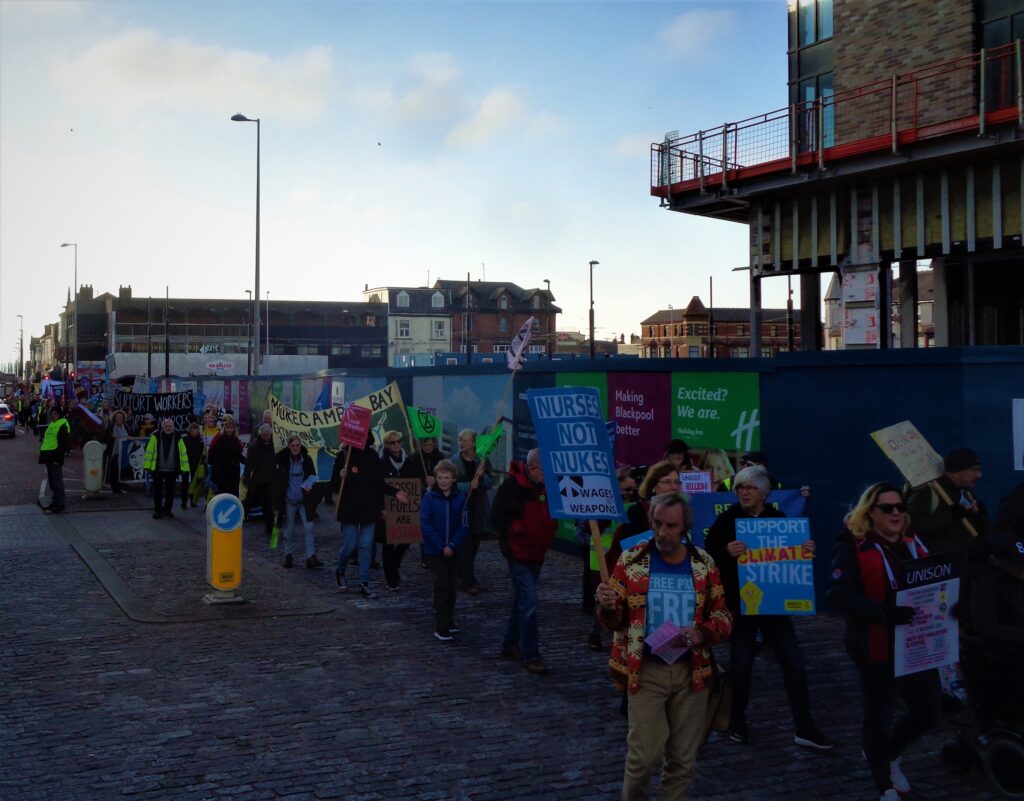 Maybe it has all got too extreme and people are just battening down? But as many placards and newspaper headlines stress: Why should ordinary people and workers’ pay for a crisis created by corporate climate criminals[iv] and billionaire incompetents? 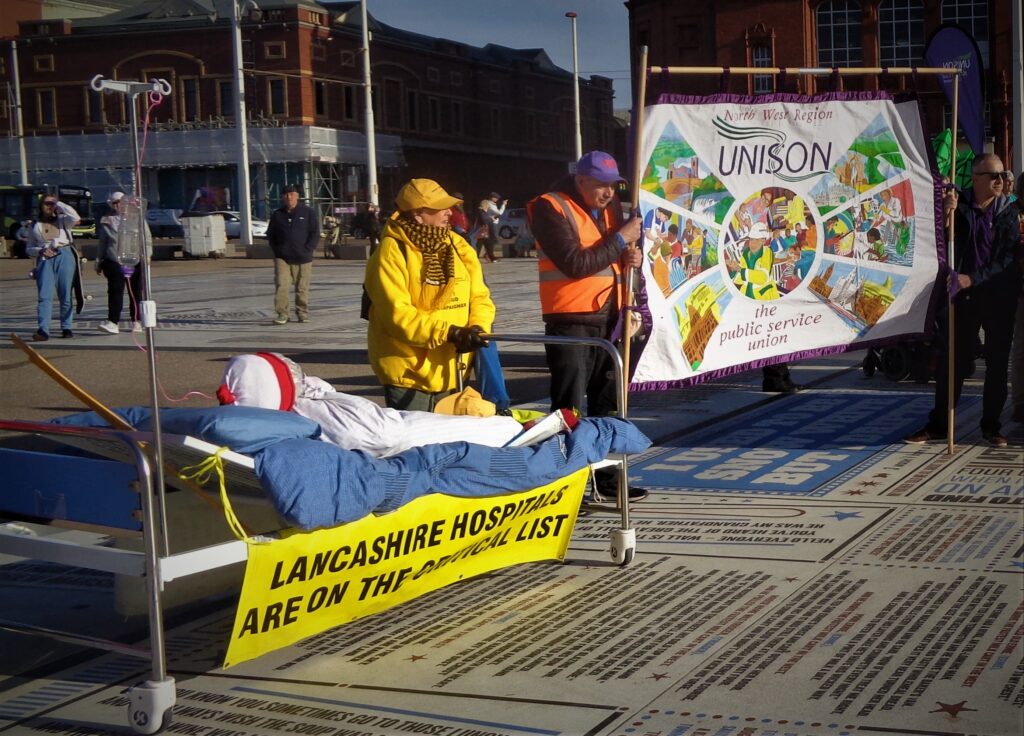 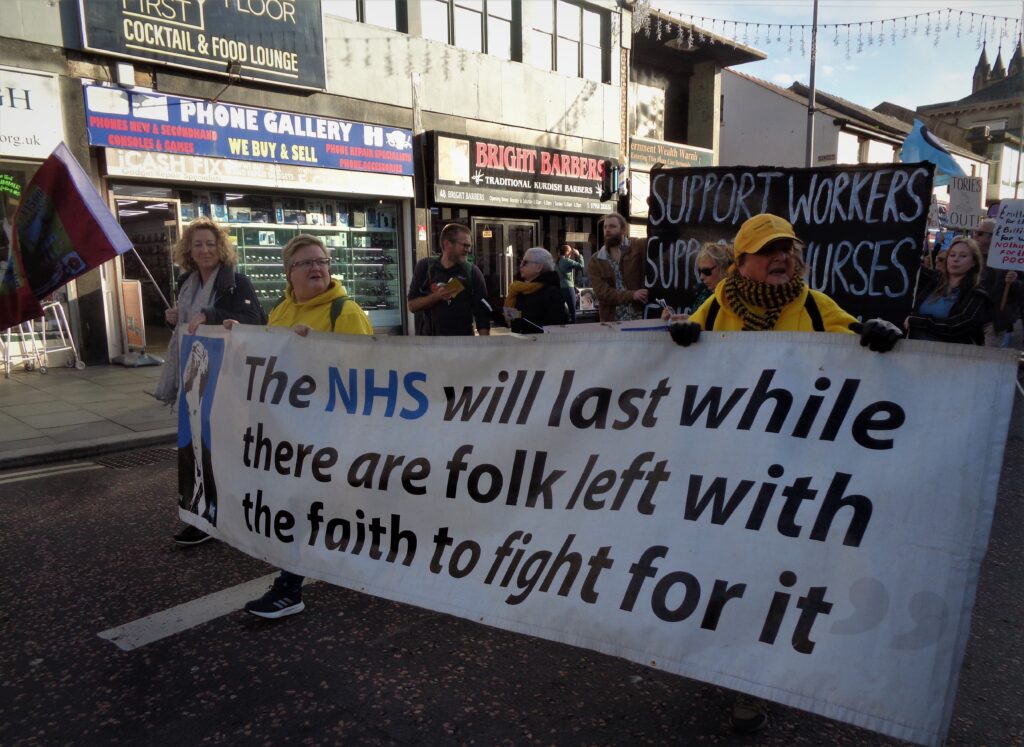 Now that the NHS – that one pale and fading survivor from forward-looking, post-war Britain, has just been moved into intensive care[v], why are so many people wearily content to carry on into the widening destructive void created by Capitalism? 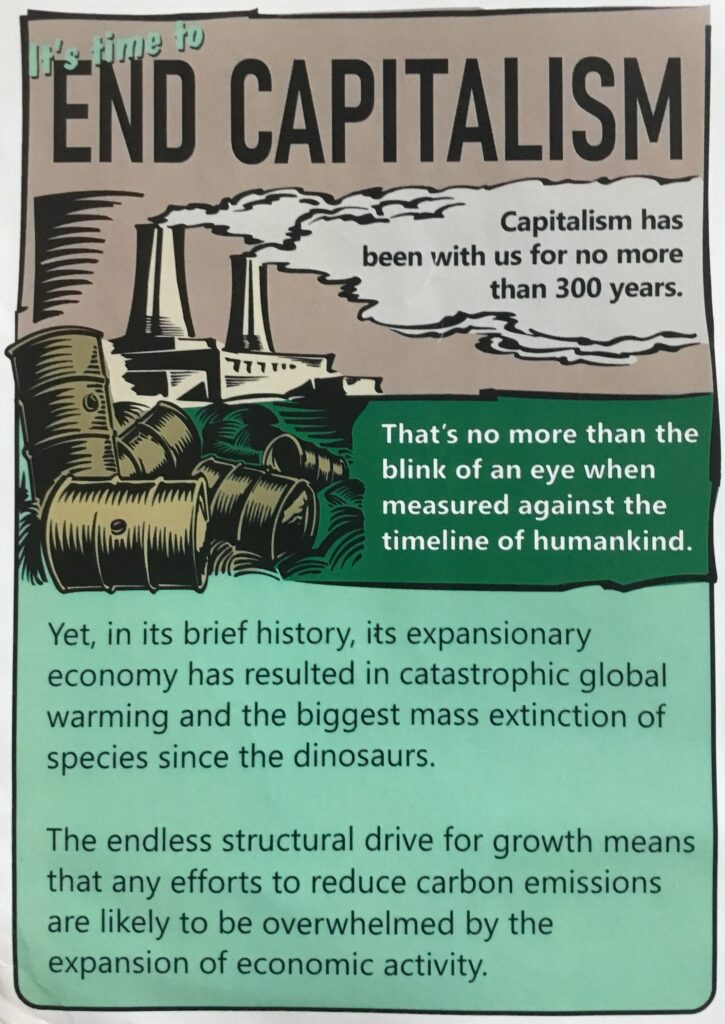 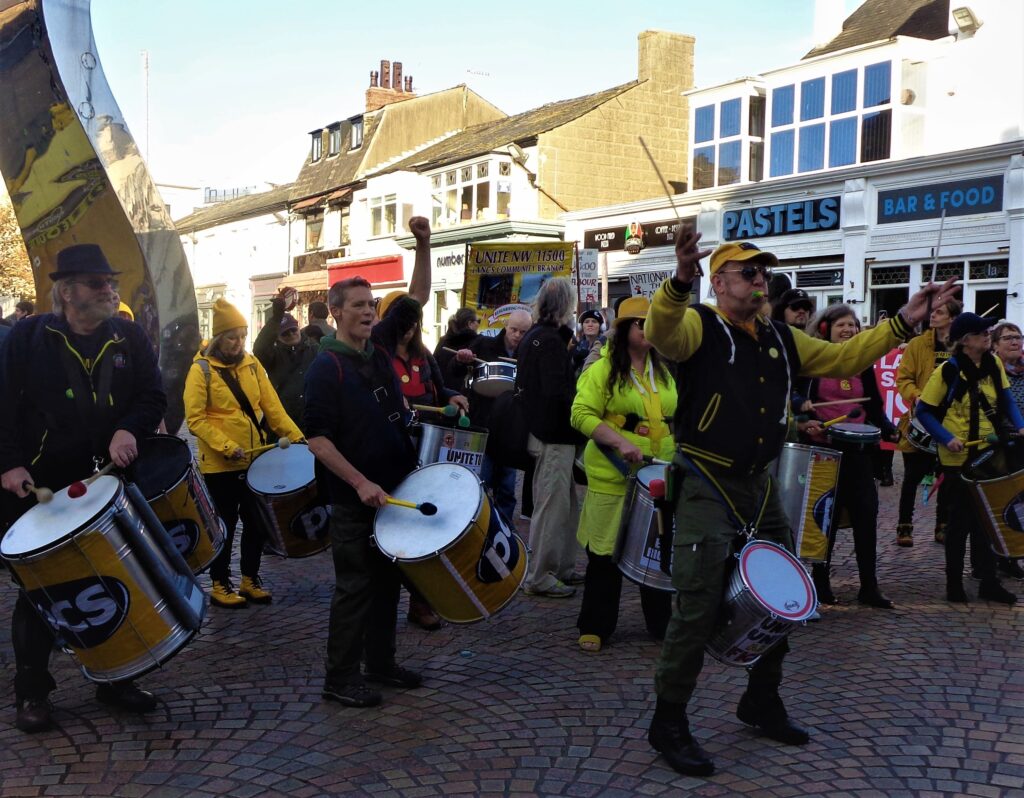 Led by a green brigade of Mother Earths in mourning and the PCS trade union samba band, the march began in warm, autumn sunshine on the wide promenade in front of the Blackpool Tower – where groups from all over the Northwest gathered: leaflets, flyers and newspapers emphasising their own priority. 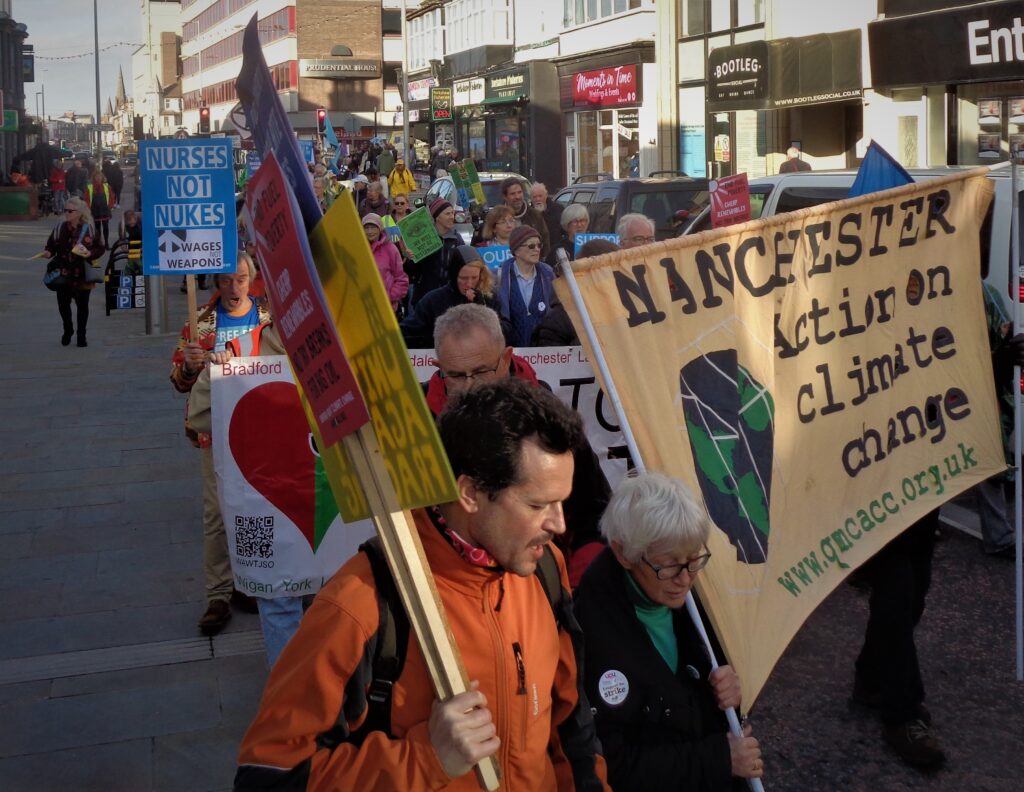 Hold-up towards the sunlight, 12th November 2022

Activists in Just Stop Oil – rightly respected with XR and Greenpeace for their fearless exploits of direct action – as well as other ill-fated, low-key protestors are already suffering from the UK’s dangerous lurch towards fascism. These days people are arrested just for thinking about climate actions[vii]. 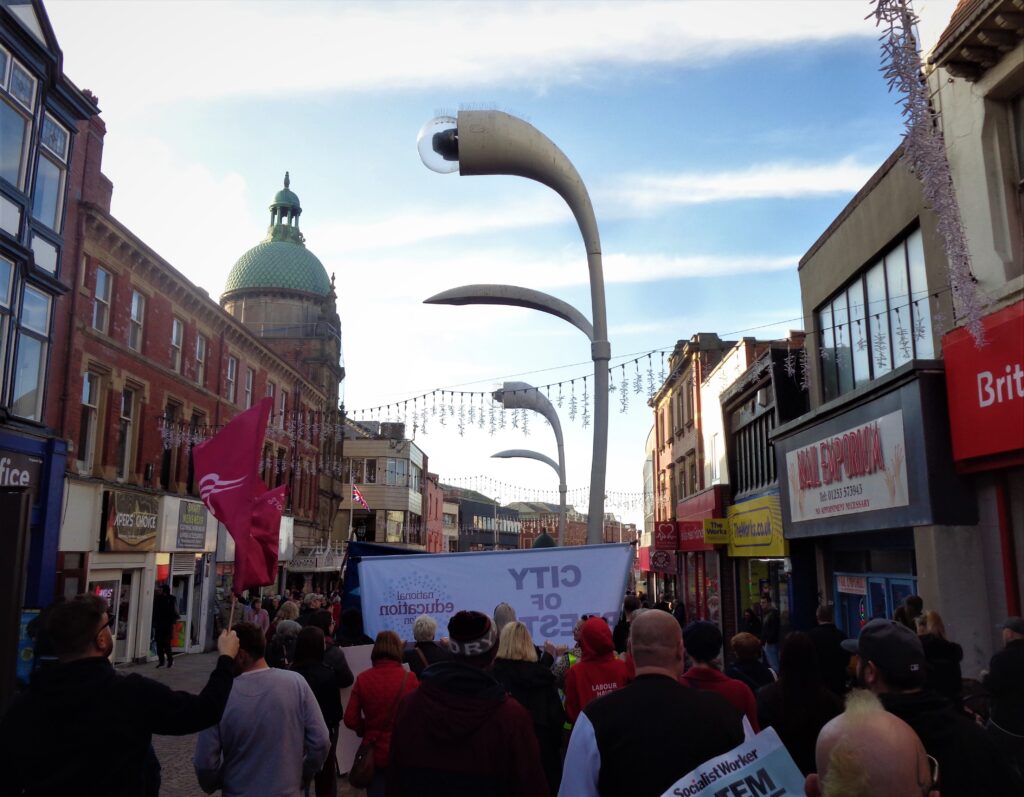 Shortly after our arrival by coach from Lancaster[viii] the formation of all the banners and placards into an impressive display was a great sight to behold in the bright light between the Tower and the sea: NO FUTURE IN COAL; Time to Go Green; SUPPORT WORKERS, SUPPORT THE NURSES – FAIR PAY FOR ALL; There is NO PLANET B – Wirral Extinction Rebellion; BLACKPOOL LABOUR WOMEN SAY ENOUGH IS ENOUGH . . . 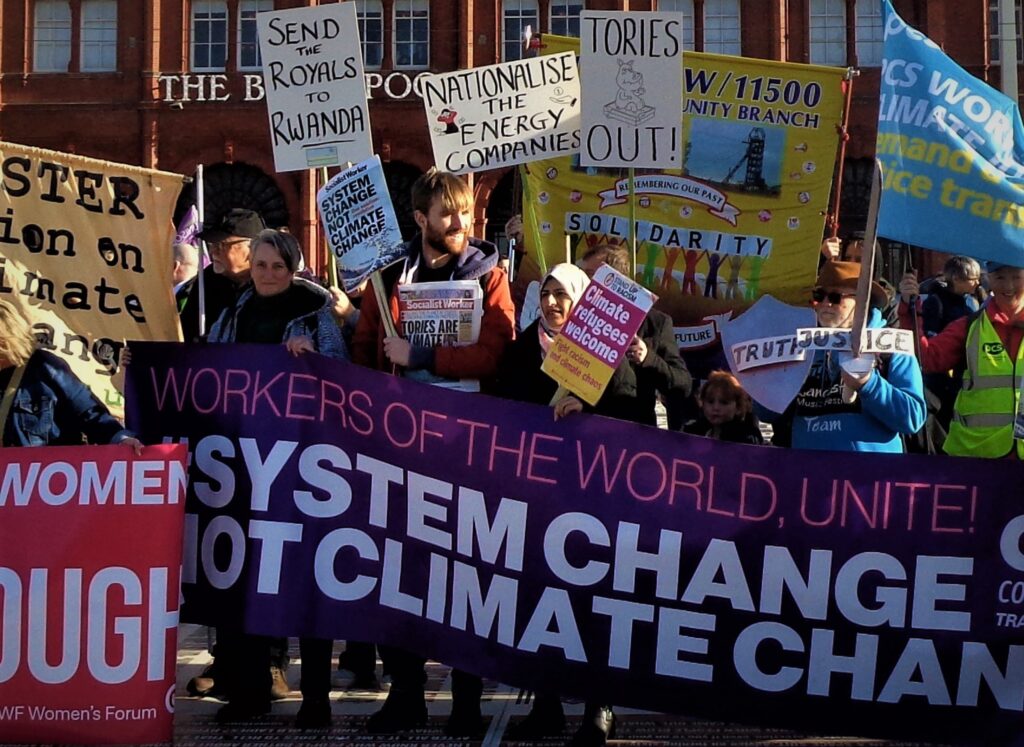 TORIES OUT / Climate refuges welcome / SEND the ROYALS to RWANDA

THE NHS WILL LAST WHILE THERE ARE FOLK LEFT WITH THE FAITH TO FIGHT FOR IT; Workers of the World Unite: # System Change not Climate Change; HANDS OFF OUR GREEN BELT; System Change not Climate Change (Socialist Worker); ONE MILLION CLIMATE JOBS NOW – CARBON CUTS NOT JOB CUTS – and perhaps one of the more humorous placards, yet with serious intent:  SEND THE ROYALS TO RWANDA.

Under the Triffids!  Blackpool, 12th November 2022 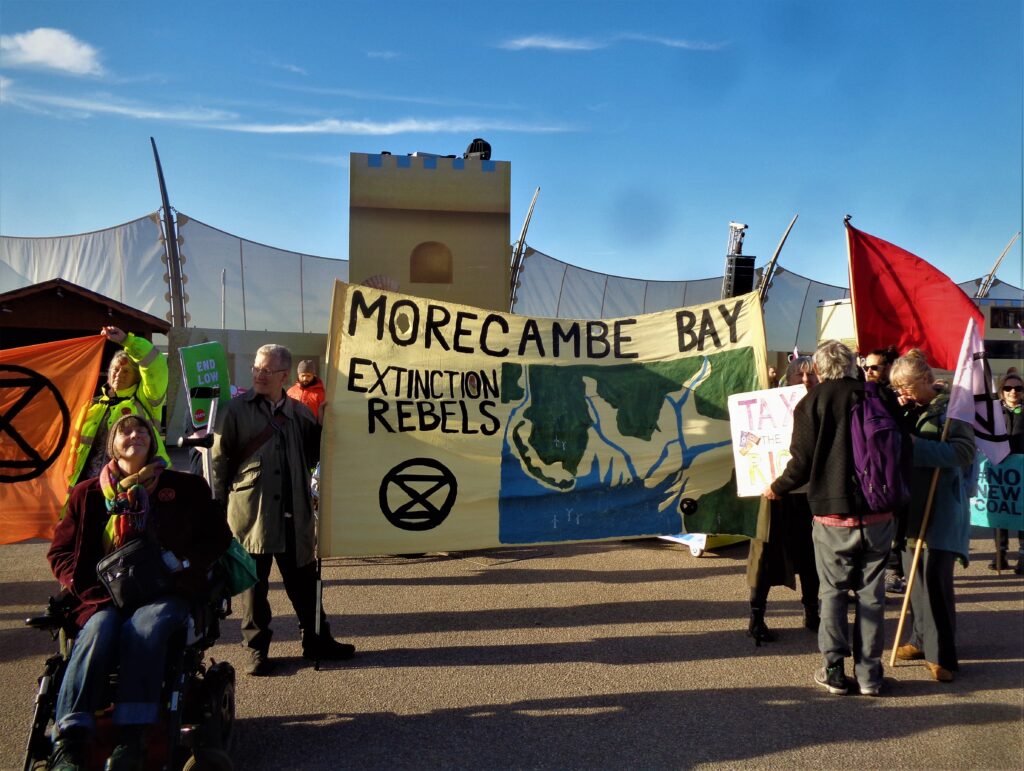 One of the angles regarding the climate crisis I’ve been aware of before but never suitably followed up on, was brought out by a flyer handed to me by a woman who turned out to be a fellow Morecambe resident: Viva! Go Vegan Now: “Going vegan has been conclusively proved to be the ‘single biggest way’ we can protect the planet and our future.” [ix] 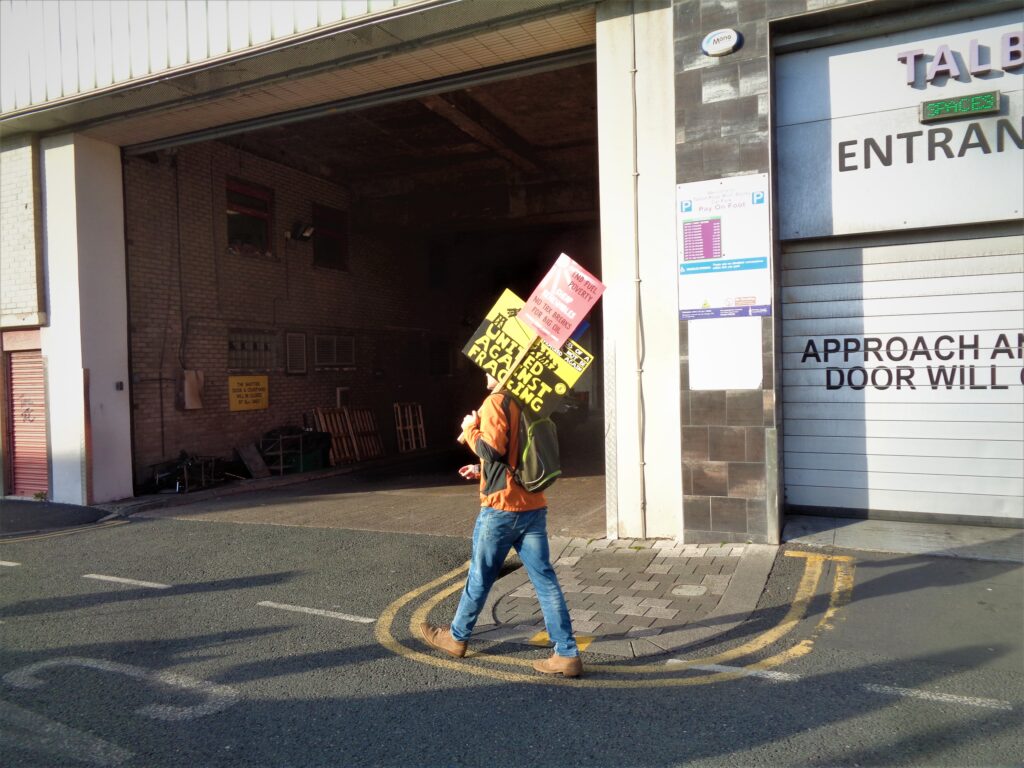 During the speeches at the end, we were reminded again that standing up against racism, standing up to support the plight of desperate migrants[x], is another key issue. If you can spare any cash to help win justice for the people held in the Manston facility, follow this link: www.crowdjustice.com/case/manstonjustice/ 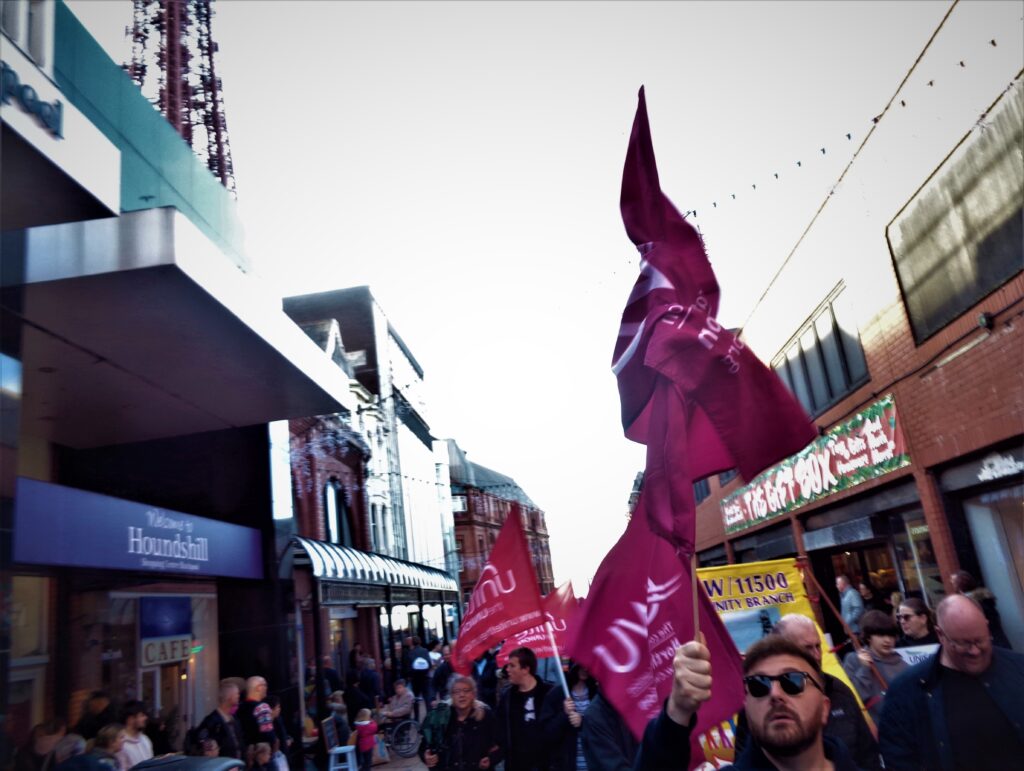 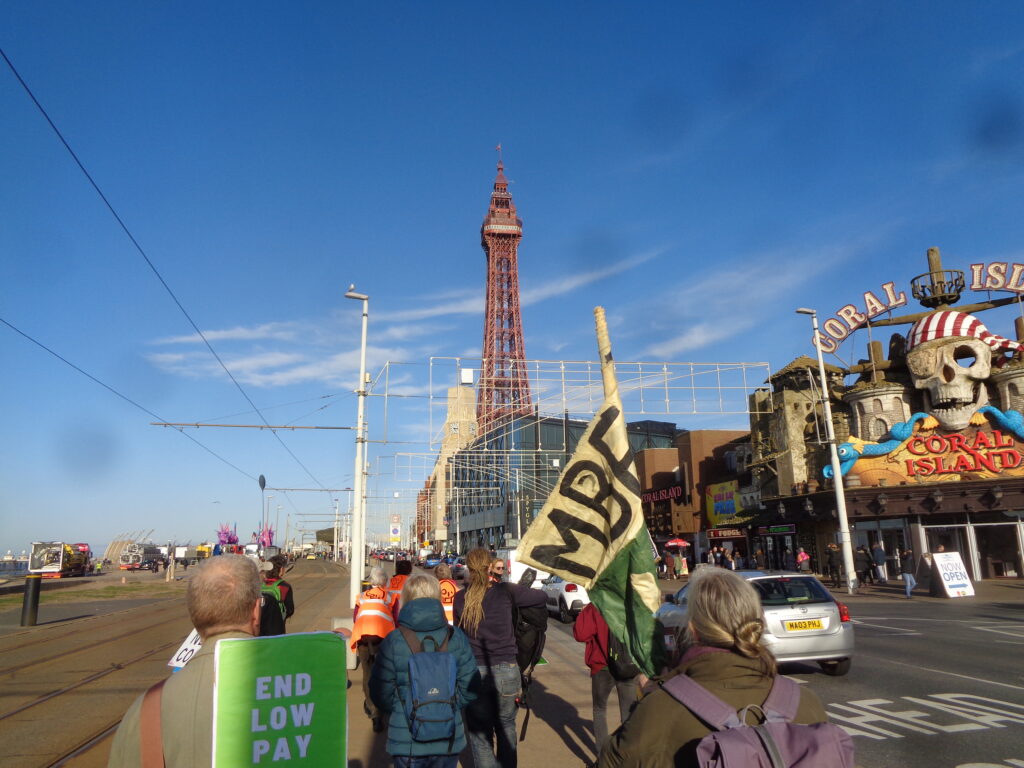 Back at the beginning – arriving in Blackpool, 12th November 2022

To win the fight against the Tory puppets and billionaires, every angle of dissent and discontent must combine, strikes increase and be bound together . . . and when the enemy begins to crumble, hold your ground, and hold to your alliances!

NOTES  All notes accessed in November 2022

[ii]  A quote I did not include at the time, paraphrasing George Orwell in 1984: “There will be no curiosity, no enjoyment of the process of life. All competing pleasures will be destroyed. But always— do not forget this, Winston— always there will be the intoxication of power, constantly increasing and constantly growing subtler. Always, at every moment, there will be the thrill of victory, the sensation of trampling on an enemy who is helpless. If you want a picture of the future, imagine a boot stamping on a human face— forever. ”

[iii]  Which isn’t to say that the better aspects of technology – used as a tool rather than allowing ourselves to be used by it – couldn’t help finish off Capitalism. See this now seven-year-old piece of optimism: www.theguardian.com/books/2015/jul/17/postcapitalism-end-of-capitalism-begun

[iv] One of the clearest examples being the oil companies: tribunemag.co.uk/2022/11/big-oils-obscene-profits-epitomise-an-economy-rigged-for-the-rich

[viii] From an email of 13th November 2022: “A coach organised by the TUC and partly subsidised by both the NEU and UCU . . . and with our fares the outing made a small profit, which we all voted (while in transit) should go to local strike funds rather than reducing our fare. Idealistic stuff!”

View all posts by Lawrence →
This entry was posted on 19 November, 2022 in homepage. Bookmark the permalink.