Posted on 22 February, 2020 by Andrew Darlington 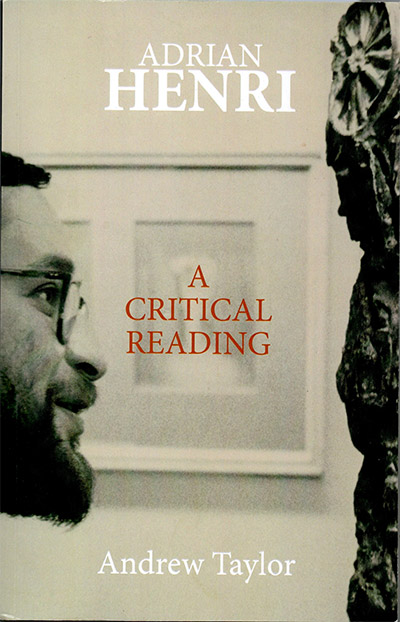 Poetry is fun. It doesn’t have to be those tedious lines you were force-fed by rote in insufferably dull English Literature classes. You don’t need to have studied dusty old crusties at Oxbridge and emerged with diplomas in this and that before you’re allowed to write a poem. Sure, there are techniques and rhythms and forms you can adopt, but it’s not compulsory. There are as many kinds of poetry as there are people who want to write it. Some are better than others, but all are as equally entitled to try. You don’t even need to incorporate learned footnotes explaining where this refers to that or the other from literary antiquity.

Born in Birkenhead – across the Mersey, Adrian Henri settled in the Liverpool 8 district – later Toxteth, after university in 1956, a bohemian quarter into which he perfectly slots. A place of ‘brightgreen patches of mildew redpurple bricks stained ochre plaster huge hearts names initials kisses painted on backdoor…’. He’d been tutored in collage by Richard Hamilton while in Newcastle, just as Art was going through its Pop Art phase with ripped collages made up of fashion magazine pages, Corn Flakes cereal packets, bus tickets and Jazz concert programmes. Poetry could do the same. For Adrian, ideas from Claes Oldenburg, Allan Kaprow, Andy Warhol and Mark Rothko were as much inputs as the TS Eliot, Alfred Jarry, Charles Baudelaire and Beat Generation poetics. He was drawing on high and low-brow culture, when there was still such a thing as high and low-brow culture. You can pluck a lyric from a Top Ten hit record, from an advertising jingle, from a comicbook superhero or a TV Cop drama. But it’s more than just that. Advertising slogans and news soundbites ‘both demand considerable economy of means and a rethinking of ideas about syntax.’ Something poets can use. Concise. Compound words. Alliterative. Sparingly employed.

Roger McGough met Brian Patten at Streate’s Coffee Bar readings, and then Henri as early as November 1961. Andrew Taylor catches the tone with Adrian Henri as an early-adapter to the spontaneous Theatre Of The Absurd ‘Happenings’ – with the ‘City Event’ of August 1962 at the Hope Hall and the Openshaw’s ‘Whitworth Gallery’, with sound and vision, art and spoken word, jazz and snaky dance, and assemblages involving groups the Clayton Squares, Roadrunners and the Casanovas, so that his later Rock flirtations were not only entirely logically consistent… but inevitable. Rock Music was becoming more poetic. Taylor’s is a slightly formal telling of the tale, so busily engaged in hunting down hidden meanings and art-references, that he sometimes misses the fun. For these poems are playful too, with consciously laugh-out-loud images. These are techniques employed for deliberate effect, to reach out and shake hands with the audience, be it the Lit-mag reader, or the pub backroom crowd. And it works. The book is meticulously detailed and spattered with a memorabilia of quotes and references, to issues of long-lost little-magazines, such as Sphinx, Solem, Ambit and Patten’s Underdog, to press interviews and direct quotes. Enhanced by perceptive insights from Catherine Marcangeli, Adrian’s life-partner.

Allen Ginsberg famously declared Liverpool the ‘centre of consciousness of the human universe’ in the wake of the Beatles-led Beat-boom when record companies scoured every cellar Club, Pub music lounge and garage signing anything with a basin-cut fringe and a shiny guitar. But when they’d all gone down south to London recording studios, the next-wave was already happening. And, although they’d been there all along, poets became the new beat, with Spike Hawkins and Pete Brown caught up in the battered bardic constellation. The best-selling collection The Mersey Sound (1967) was a useful flag of convenience, yet it not only catches the moment but still resonates with vibrant energy, mischievous wit and scally cheek, allied to moodshifts into pathos and melancholia. You hear the Adrian Henri voice in your head as you read the poems. If you don’t, there are https://poetryarchive.org/poet/adrian-henri/ clips to aid and abet.

An Adrian Henri poem is deceptively simple. You think you can do it. Until you try. Even a poem such as ‘Me’ – which seems to consist of a list of trendy names arranged in order to establish the poet’s cultural and countercultural credibility, with Beatles-names opportunistically thrown in there as hip signposts, it has a strict rhythmic structure dictated by metrical concerns. Too close a critical reading can drain the life from a poem, like glimpsing the Illusionist’s props behind the curtain, or reducing the spontaneity of a Jazz solo down to sheet-music notation. But Adrian Henri is too smart to be boxed. His poems survive surgical deconstruction, and dance their defiant escapology.

After the implosion of the live touring Liverpool Scene band, and its more poet-centred sequel Grimms, there are art appointments balanced against writer-in-residences, as Taylor delves into the later and more reflective collections, From The Loveless Motel (Jonathan Cape, 1980) with its moves into a more eco-centric awareness, plus references to both Elvis Presley and TS Eliot, and Penny Arcade: Poems 1980-1983 (Jonathan Cape, 1983) reacting to the Toxteth riots and John Lennon’s murder. Liverpool itself in hangover. Wish You Were Here (Jonathan Cape, 1990) is a poignant haunting by former wife Joyce, with the Hillsborough disaster adding a more generalised pain, while Not Fade Away (1994, Bloodaxe Books) – the last book published during his lifetime, is concerned with ‘preserving memories’. Sometimes note-book poems, as visual as a painting, as rhythmic as the Blues. There are past-echoes – and deliberate returns to earlier techniques and themes. I’m not entirely convinced by his sampling and cut-up parodies of already over-familiar texts – ‘yea, though I drive / airconditioned / through the Valley of the Shadow / of Death…’. Psalm 23 in California’s Death Valley, or Larkin or Wordsworth’s daffodils in plastic replica – ‘I wandered lonely as a lonely cloud/ I wandered lonely through the lonely crowd/ an all-at-once, a one-time only crowd.’ Do they function as reader touch-points, like drawing in radio song-lyrics – ‘I want to know what love is’? or just over-obvious puns? Not that it matters. By then he was Adrian Henri. A known quantity. The work had been done. The vital poems written. The contribution made. But a writer writes. A painter still paints.

Adrian Henri died in Liverpool December 2000. A formidable presence in person, a giant on the stage and page. This fine book helps remind us just how relevant his ideas still are to writing, now, when we most need that jolt of creative energy. That poetry is fun.

View all posts by Andrew →
This entry was posted on 22 February, 2020 in homepage and tagged Adrian Henri: A Critical Review, Andrew Darlington, Andrew Taylor. Bookmark the permalink.

2 Responses to ADRIAN HENRI: POET OF MEAT AND FLOWERS