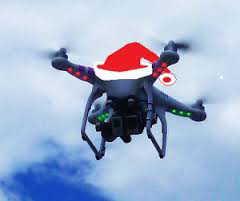 Santa drones enable 200 children to be ‘dealt with’ at once

An MOD spokeswoman has suggested a new and highly expensive drone delivery plan could be ‘installed immediately’ in UK skies this Christmas Eve after Santa Claus claimed his rounds had become ‘impossible.’ The ageing public figure is known to be struggling under new harsher tax regulations and has had to sell off four of his reindeer to cover heavy losses in Christmas shares after a disastrous flotation of the public holiday crashed on world stock markets.

Alison Brentwood Turner Overdrive, adviser to the MOD, admitted, ‘BAE and other weapons systems companies already had plans in the pipeline for the risky operation’ due to her intimate but purely coincidental ‘links’ with the Christmas flotation consortium and would be ‘more than pleased’ to sell the necessary 24,000 stealth predator kill attack drones to the MOD required for the hectic Xmas period.

It is thought that individual presents will be shot down the chimneys of larger houses in the traditional style with a laser-guided unit, whilst new smart cluster present delivery systems are to be used on council estates where groups of up to 200 children can be ‘dealt with’ at once. Miss Brentwood Turner Overdrive, also a consultant at BAE and a major shareholder, reassured the public, ‘We believe Yuletide collateral damage can be kept to a minimum with only a small percentage of the group strikes resulting in the maiming of children, mainly from fast moving Lego pieces and burning fluffy penguin dolls.’

Ethan Harrison is the republisher of http://illuminatihunter.com/ and has his own blog The Stuffing-it-to-’em Post @Blogspot.com

View all posts by Ethan →
This entry was posted on 24 December, 2014 in homepage and tagged Ethan Harrison, politics, satire, Social commentary, spoof news. Bookmark the permalink.