Alex Rex and friends on tour 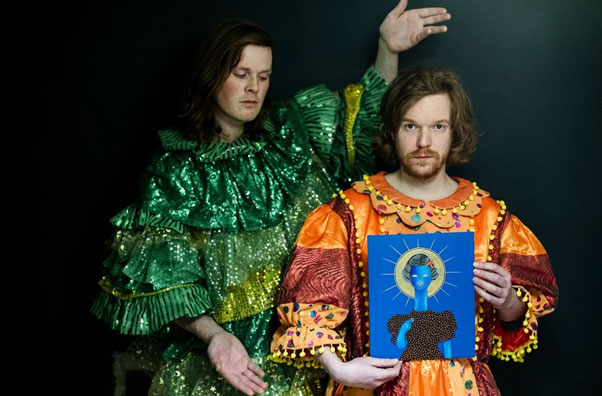 Some meandering observations from Alan Dearling

This was an evening of quality musicianship – but strangely eclectic. Ambient to Spanish classical to psychedelic folk-rock, all served up in the upstairs room above the Golden Lion in Todmorden. 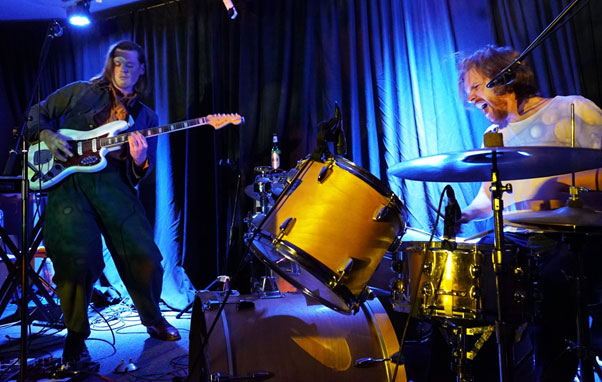 Apparently, Alex Rex is a ‘Ghost rock’ project. Honky-tonk, via folk, to grunged up wall-of-sound, psyched-up darkness. Think of Nick Cave fronting the Incredible String Band (ISB)… but maybe that’s a bit too close to the route towards the padded cell! But remember that Alex Neilson has worked with Ben Chasny’s ‘Six Organs of Admittance’, as well as with Will Oldham, Bonnie Prince Charlie and the much-praised work with his own band, ‘Trembling Bells’, sometimes featuring Mike Heron from the ISB.

The show I saw was a pared down, duo-version of Alex Rex, sans the dresses, but with still plenty of shrieking guitars and serious weirdness. Alex on drums and his side-kick and friend, Rory Haye, on guitars and sharing vocal duties. Alex is frequently fearsome and awesome, alternating between a quiet, genial presence, to spitting deity of darkness.

A powerful moment in the set came with, ‘What’s the use of getting sober? If we’re only going to get drunk again’ – acapella version from Alex Neilson here: 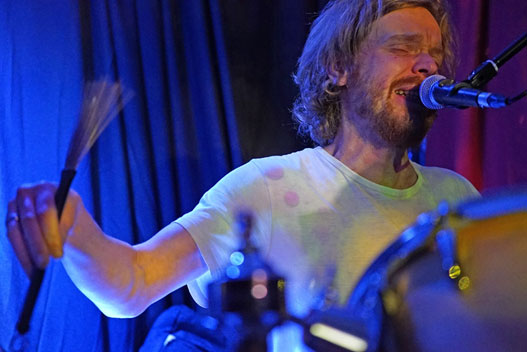 It was all very wistful, whimsical. Dark, mythical. Quirky. Serious, but comical and kind of crazy around the edges. Odd sensitivities. Screwball.  Many Scottish idioms, and, earlier on in the set – many echoes of Robin Williamson and the ISB.

Guitarist, Rory is a towering presence. He’s pretty tall too! – as Alex informed us, “Rory does a lot of the heavy-lifting for me.” 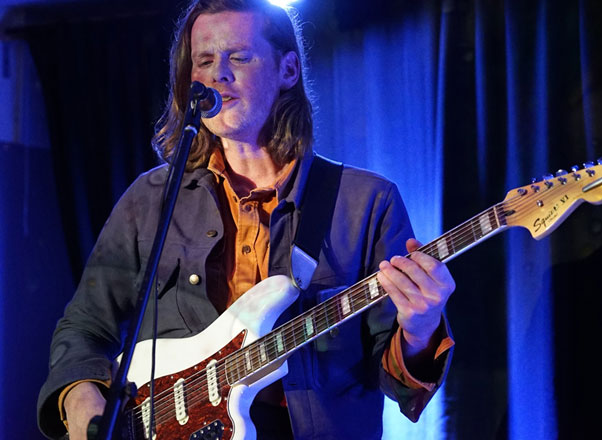 There’s a powerful resonance of the ‘Bonnie banks of Loch Lomond in ‘Scandalise the Birds’, with screaming, guitar: https://www.youtube.com/watch?v=PfhJpDBQ5_o

And here’s a much earlier, Alex Rex video, ‘The Screaming Cathedral’ from 2017’s ‘Vermilion’ album, complete with additional elements of ‘Wicker Man’ from the Boss Morris dancers and even more quivering, fuzzed-out guitar sounds, klaxons and blips: https://www.youtube.com/watch?v=DgXp0i4V5A8

Support for Alex Rex came from Victor Herrero, who is an extra-ordinarily sensitive guitarist – a cultural ambassador for the music of Spain. He grew up living in the famous monastery Franco erected in a mountain valley west of Madrid (El Valle de los Caídos). He has collaborated with many artists including Luzmila Carpio, Ed Askew, Alasdair Roberts,  Tomi Simatupang, Alex Neilson, Paz Lenchantin, Michael Zerang, Nat Baldwin, Lorena Álvarez and many more. 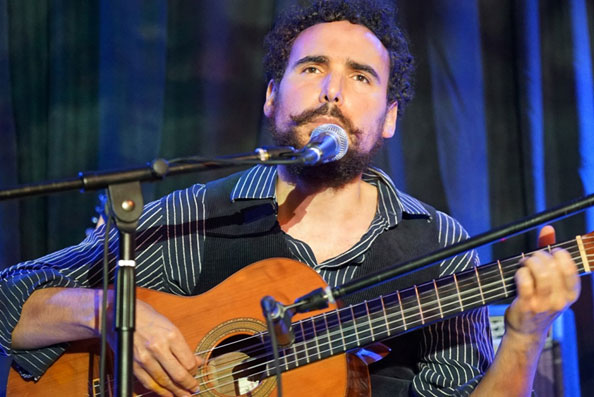 And live with his band:
https://www.youtube.com/watch?v=je7MCi9t8LI

Peat kicked off the proceedings with just over 20 minutes of swirling, ambient sounds from fiddle and electronica.  Apparently these are: “Ombrogenous tones from the mire”. 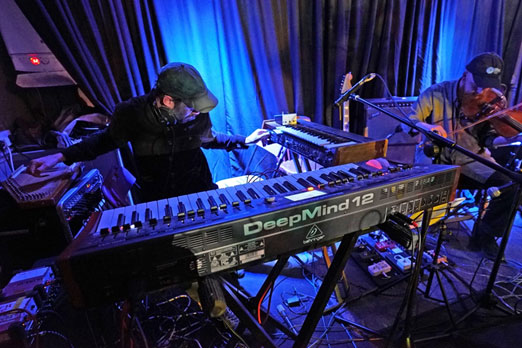 Tweet
This entry was posted on 6 November, 2021 in homepage and tagged Alan Dearling. Bookmark the permalink.