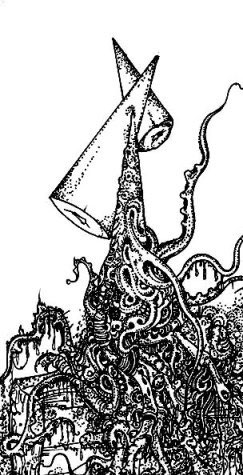 The body was judged to be in a state of profound instability.

Perhaps it had been preserved, perhaps not.

It was delivered to this pathologist in a golden casket, like some ancient religious relic.

Tissue of unknown type floated in the bottom of the container.

The cadaver itself was 36 inches long, its weight about 8 pounds.

But this could and did change.

The external appearance was not (repeat not), of ‘human’ or ‘humanoid’ type.

The skin appeared smooth and a dark, bluish grey colour. It soon changed to emerald green, a pure blue and then back to grey. All while we watched.

There was no clothing, although the ‘flesh’ (I use the term for the sake of convenience) molded into various decorative forms and ‘extrusions’ including tentacles and cone-shaped forms. There were two sets of genital organs, but no way of determining a dominant sex or gender.

The nose consisted of two slits.

The thin-lipped mouth was frozen into a rictus, a haunting smile. The cranium appeared over-large, devoid of hair and the cranial skin seemed impregnated with glittering motes of unknown pigmentation. The eyes were very large and sloe-shaped. They were open. There were no eyelids as such. Although ‘dead’ they seemed ‘alive’. Images flashed in their black depths like pictures on a movie screen. Arms and wrists were very thin. The ‘hands’ were more like claws, with long talons of hard, white, tissue, polished and shiny. These talons extended directly from the wrist. No palms

The body was opened from crotch to chin.

Blue foam emerged from the incision and formed itself into an ectoplasmic exhalation. A strong odour of cinnamon filled the laboratory.

Inspection showed the bone structure to be transparent; a colourless, cartilaginous substance with a somewhat artificial appearance.

Numerous worm-like entities wriggled in the interior, but quickly vanished. I observed internal organs of unknown function, some with metallic implants. The ‘inside’ may also be the ‘outside’. Dimensionality is unclear. We found an intricate webbing of mesh-like material which glinted with the same pigmentation previously observed.

The thoracic cavity contained a floral structure with multi-coloured petals. The roots dissipated before reaching other organs. I removed one of the ‘petals’ for microscopic analysis. See separate report.

There was a large multi-chambered heart and an extensive circulatory system. The ‘blood’ behaved like quicksilver. Some of this material was extracted, but it soon evaporated.

Next, the cranium was dissected and it was observed that a ridge of cartilage separated the brain into two isolated spheres. When we entered the first sphere we found a gelatinous fluid bathing the interior. The origin and function of this fluid is mysterious. My assistant experienced a sequence of multiple orgasms, but I remained calm.

Then we entered the second sphere that was composed entirely of crystal. We heard a musical sound, but could locate no source among the complex of mineral fissures and lobes. Unfortunately we also observed extensive damage. The bilateralism of the brain could not be determined with accuracy.

Here, in the Zeta Reticuli system, we have had the opportunity of examining innumerable specimens of alien species abducted from their home worlds in the interests of science and propagation. This particular example defies all previous classifications and may threaten the integrity of our taxonomies. It appears to be a form of creature (or creatures) unknown to pathologists; a being which utilizes elements both animal and vegetable and is also able to attain various indeterminate forms of morphological transformation.

I should note that some reports have mentioned hypothetical semi-mythological aliens known as ‘humanoids’. These ‘humanoids’ or ‘humans’ are, it is said, the source of many anomalous phenomena and historical enigmas. They are also said by cultists and other cranks to threaten the future of life as we understand it. As I have previously stated, the specimen under discussion is not of the so-called ‘human’ type, However there are no descriptions of any similar creatures in the archives of Sector X. It is important to be aware that when living this alien may be dangerous.

There are many unidentified entities preying upon us.

One day these entities, including, perhaps, the semi-legendary humanoids, may decide to reveal themselves to us.

Perhaps this examination is only the beginning.

Tweet
This entry was posted on 20 March, 2021 in homepage and tagged A.C.Evans. Bookmark the permalink.