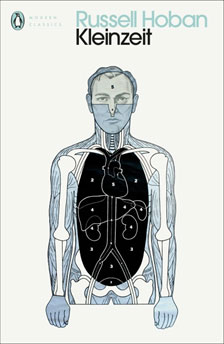 American author Russell Hoban was originally an illustrator. In real life he inhabited a Victorian house in Fulham, his writing room crammed with objects that informed and inspired his writing, along with a shortwave radio that created the ambience he wrote in. His fiction was otherworldly, highly original and often obsessive. Hoban circled and returned to similar themes throughout his adult fiction (he also wrote children’s books): many of his characters feel there is something or someone else looking out of their own eyes and skin, many speak in an elliptical and unconvincing manner, many inhabit worlds where the mythical and fantastic are everyday occurrences and almost everything is not what it seems. Hoban’s worlds are full of asides, subtexts, metatexts, puns, riddles and impossibilities; most are marvellous places to visit.

There’s something satisfying about uniform editions of an author’s work, so it’s wonderful to see Penguin Classics reissuing Hoban’s first eight novels with cover art by Scottish artist Eduardo Paolozzi. In the past Hoban hasn’t always been well served by cover art, with 1970s Picador paperbacks seeming particularly dated, but now that has been put to rights: Paolozzi’s images are as enigmatic, strange and subtle as Hoban’s writing, working by association not illustration, just as it should be. The first four titles are published this month, with the next four at the end of April.

Hoban’s first novel, The Lion of Boaz-Jachim and Jachim-Boaz, feels very much a product of its time (1973). It is nothing like Narnia or Tolkien’s world but it was compared to them because that was what was being read at the time, and because critics and reviewers are renowned for making lazy comparisons. It is a tale of an epic journey, the story of a map-maker travelling to find lions in a world where none are left. Yet find a lion he does, or perhaps more to the point, a lion comes to find him, possibly from another world, possibly more as the idea of a lion in physical form. But rest assured there are no dwarves, elves or bearded wizards to be found. The Lion… is funny, inventive and sometimes a little twee, yet along with Turtle Diary, the third of his adult novels, it is also the most ‘realistic’ and rooted of Hoban’s work. I’m not sure, however, if that is a good thing.

Turtle Diary (1975) is an almost straightforward narrative, the story of a bookseller and an illustrator conspiring to liberate the giant turtles at London Zoo. It’s engrossing enough, and was made into a fairly tepid family film, but it feels like an aside in Hoban’s overall storytelling trajectory. Kleinzeit, published the year before, was much more original and outrageously comic. Its titular character inhabits a world where everything speaks to him: death in chimpanzee form hides under his hospital bed, a glockenspiel encourages him to play and busk with it, London Underground trains gossip and whisper, yellow sheets of paper demand to be written on and handed out to strangers. Surreal and laugh-aloud funny as this is, it is rooted in an anthropomorphism based on the world around us. Hospitals are full of strange sounds, Underground trains do announce their presence in the rail’s electric whispers and so on; Hoban has cleverly exaggerated these to produce a surreal and surprising world which Kleinzeit has to navigate and survive in. Despite the surrealism, London is gritty and real throughout the book, but seen and encountered anew; a kind of fantastical palimpsest. 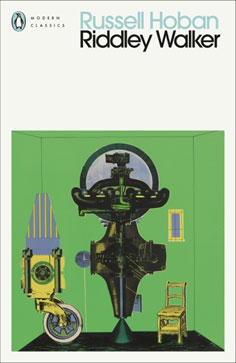 If Kleinzeit is one of my all-time favourite books, Riddley Walker, published in 1980, is in top position (tied with Alan Garner’s Red Shift, since you asked). It is set in a post-apocalyptic Kent where humans live in tribal settlements and live by farming and scavenging, digging up the remains of our industrial society as they wait for visits from politicians-come-preachers-come-showmen-come-shamen who use Punch & Judy and the Legend of St Eustace to explain human history and the nuclear apocalypse that has gone before. Canterbury appears to be the still radioactive centre of the explosion, and Riddley makes several trips there, accompanied by a pack of wild dogs he befriends. He meets the deformed and disabled inhabitants who still live there, and gradually discovers – as he sees it – the story of creation and power, before becoming a teller himself, with his own set of puppets and his own version of the story. Confused? You should be. This is a book that keeps on giving, with more to find out, think about or conjecture from every time you revisit this strange landscape. And I’ve forgotten to mention it’s also written in a dismantled and ruined, post-apocalyptic language that took Hoban many years to create and knock into shape. Sound it out in your head or read it aloud and it’s clear enough, but speed-read it or stay disengaged and you’ll struggle. Riddley Walker is an assured, innovative masterpiece and a cult classic; I hope even more people will read this new edition and think about the nature and power of storytelling, industrialisation, (mis)interpretation and society. 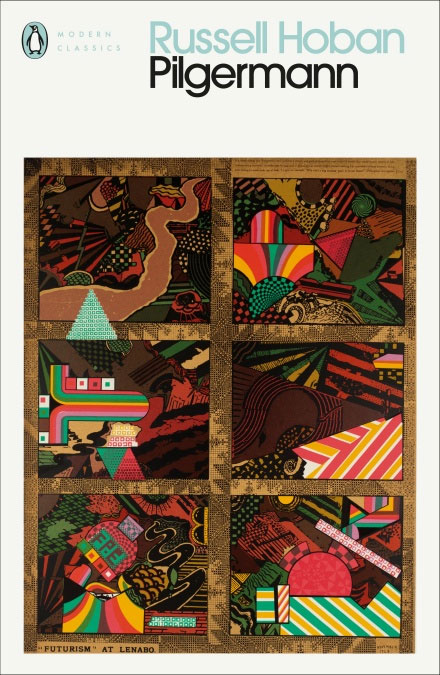 1983’s Pilgermann, however, has continued to defeat me since it was first published, despite several reads and re-reads over the decades. It is a repulsive, violent and brutal novel, a mash up of Hieronymus Bosch, geometric art, the Crusades, religion and torture, supposedly woven together as an allegorical and actual pilgrimage towards meaning and salvation. I confess I simply don’t get it at all and find much of it stomach-churningly horrific and bewildering confused and confusing.

All this reworking and thinking about the power of myths and how they survive in contemporary society continued to intrigue Hoban. In The Medusa Frequency (1987) we are back in London with author Herman Orff, who is suffering from writers’ block. He responds to a flier pushed through his door offering a cure and finds himself (rather like Kleinzet, previously) in a different London, one inhabited by characters from history, mythology and art, including the Head of Orpheus – mostly adrift in the Thames, Vermeer’s Girl with the Pearl Earring, and the Kraken. A lost love turns up in this dream world too, and if the story is somewhat slight, jokey and straightforward (especially in comparison to Riddley Walker), it’s an enjoyable enough novel.

Despite the return to clarity in Hoban’s writing, it’s also the point where many might put Hoban’s work aside. It would be almost another decade before Hoban published his next adult book, Fremder (1996), and then Mr. Rinyo-Clacton’s Offer (1998) – both of which are being republished by Penguin. The latter was the first of a profusion of novels until Hoban’s death in 2011 which often seemed like similar episodes from the same story, whoever their main characters supposedly were. Many feel rushed and unpolished, some betray a rather sexist tone in places, with the lusting male gaze and casual sexual encounters gleefully embraced (but often awkwardly described) by protagonist and author. Most are set in Londons that are both familiar and unfamiliar from previous Hoban novels, most involve rather self-aware characters dreaming and having premonitions; indeed many read as lucid yet confusing dreams, where episodes precede another and then another without much narrative or plot. I have a soft spot for Amaryllis Night and Day (2001) but Mr. Rinyo-Clacton’s Offer, Angelica’s Grotto (1999), The Bat Tattoo (2002), Her Name Was Lola (2003), Come Dance With Me (2005), Linger Awhile (2006), My Tango with Barbara Stozzi (2007) and Angelica Lost and Found (2010) desperately needed editing and revising, perhaps compressing and remixing into one or two new books.

In Mr Rinyo-Clacton’s Offer, instead of buying the cure for Writer’s Block (as Orff does in The Medusa Frequency), or a musician selling his soul for the gift of the blues, protagonist and anti-hero Jonathan Fitch is approached by a smooth-talking stranger (the Mr of the title) who seduces him and then offers to buy his death a year later in exchange for a million pounds. It’s a sometimes hilarious but often rather longwinded romance, set (of course) in London, but it also highlights some of the problems with Hoban’s later books. Firstly, the plot resolution is clunky in the extreme; it comes out of the blue and neatly solves everything by the end of the page: there is a reveal about the relationship between Rinyo-Claton and a secondary character, and Fitch and his ex are suddenly able to get back together, a million pounds richer. Secondly, it highlights the way Hoban uses art and music as a kind of shorthand, clearly expecting the reader to know the specific painting or song (or opera or symphony) mentioned, and understand how and what the author thinks about it or the mood or ideas he associates it with. It’s a lazy way of trying to describe how a character feels, and for me it is also a kind of arrogance on Hoban’s part, as he shows how cultured and knowledgeable he, the author, is and the reader (or this reader, anyway) isn’t. 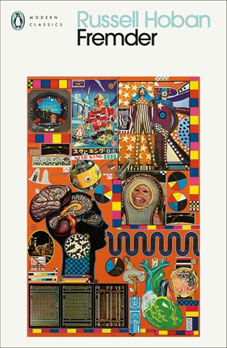 Fremder, however, is better than I remember, and the Paolozzi cover here is amazing, highlighting the fact the book is supposedly science fiction, although many of the same tropes present in previous novels reappear (as they do in many of Hoban’s books). Vermeer’s girl is here, several objects seem to have voices of their own, and Hoban’s misuse and punning appropriation of terminology and proper nouns are foregrounded to annoying and unconvincing effect. It’s difficult to know if Hoban is mocking science and how society uses language, or simply struggling to explain the technology in his fictional world, where space travel is undertaken by Flicker drive but humanity still can’t cope with the complexities or realities of sex, lust, love and communication. It is the gobbledeygook science terminology that doesn’t quite work here, along with some of the references to technology (which hasn’t quite developed today as Hoban envisioned), that lets this story down as Fremder travels not only through space but memory, dreams and time. But I enjoy the subversion of science fiction here and it’s good not to always be stuck on the Underground or walking dirty city streets.

Hoban was an astonishing and surprising author. If his later work isn’t as accomplished as his earlier writing, he still left a solid body of original and impressive fiction, along with The Moment Under the Moment (1992), a book of essays, sketches and stories, which partly helps elucidate and explain some of Hoban’s ideas and themes, and offers some autobiography along with background material to his thinking. These beautifully designed Penguin reissues include the best of Hoban’s work, and I’d encourage you to befriend Kleinzeit, embrace the language and confusion of Riddley Walker’s ruined world, and explore at least some of Hoban’s Londons. You won’t be disappointed.