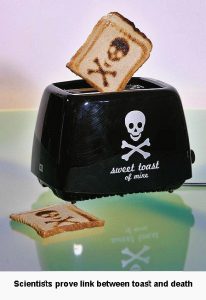 This is the frightening discovery of new research carried out by the UK’s finest scientists, which establishes a link between roast potatoes, toast and death. Since roast potatoes and toast were the last food stuffs not to have been already considered fatal after life-threatening health risks were discovered in wine, beer, salt, pepper, red meat, white meat, transparent meat, fish, wheat, carbs, low carbs, non-carbs, cheese, pasta, milk, sugar, tea, coffee, cocoa, monosodium glutamate, ketchup, chips, gurkins, e-numbers, gravy, ferrero rocher, blue smarties and even the candles on birthday cakes, now it is a scientifically proven fact that all food causes cancer.

The only food products still remaining on the ‘safe‘ list are kale and bottled water and, although there was a surge in kale prices on open markets after the report was released, it was soon pointed out that kale was not proper food at all as it possessed less flavour than a dream about cotton wool.

Author of the report Doctor Harold H. Isteria PHD babbled forebodingly, ‘I was educated at Oxford at a cost of over half a million pounds. This survey cost at least fifty times that so I must be right. I know that we [the scientific community] have made some ludicrous claims before but this time I am double extra positive certain that we are right. Cross my heart and hope to die, but the existence of polycyclic aromatic hydrocarbons (PAH’s) in cooked or smoked food means that eating a piece of burnt toast is now exactly the same as putting a gang of fully armed terrorists in your mouth and swallowing. Complete madness!‘

Although the scientific community are highly confident about their findings, not all UK citizens are convinced, and when Mr Will Barrow (52) a wheelbarrower at a furnace in Barrow-in-Furness was told that his £6.95p full monty breakfast; two bacon, two sausages, two eggs, three hash browns, fried mushrooms, black pudding and two pieces of killer toast contained enough deadly cancer-inducing polycyclic aromatic hydrocarbons to kill half the population of Wales, he chewed contemplatively before saying, ‘Pah!’

Video thumbnail, Could overcooking some foods cause cancer ? … There is concern around burnt toast and …

Tweet
This entry was posted on 26 January, 2017 in homepage and tagged current affairs, Ethan Harrison, politics, satire. Bookmark the permalink.

One Response to All Food Causes Cancer!