‘ALMOST FAMOUS: JOURNEY TO THE SUMMER OF LOVE’

Posted on 10 January, 2018 by Andrew Darlington 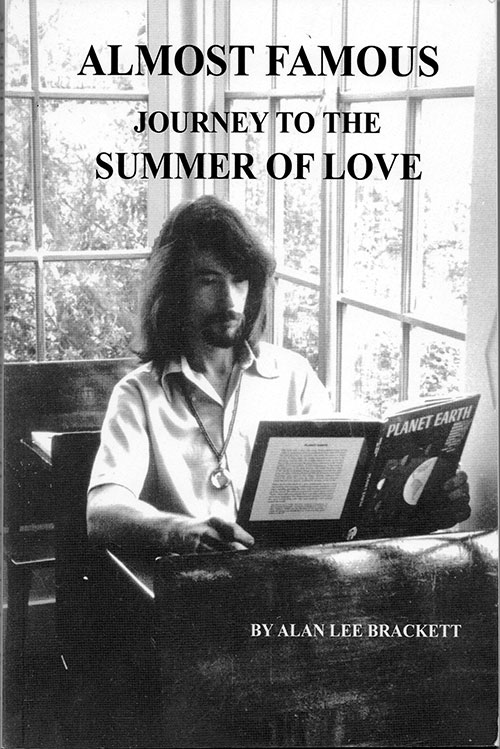 Book Review of:
‘ALMOST FAMOUS: JOURNEY TO THE SUMMER OF LOVE’

(One For The Road)

The cover-photo shows bearded long-haired Alan sitting in what looks to be a burger-bar perusing the ‘Planet Earth’ catalogue as though making his selection from life’s global menu. Music, Girls, Travel. Drugs… yes, yes, yes. Then there’s ‘fame’. Fame is a relative concept, and unequally distributed. Sometimes it’s worth being grateful for the bit you get. The former main-man with LA-based Peanut Butter Conspiracy got as close to cult as it’s possible to get with close-hits “Turn On A Friend” and “It’s A Happening Thing”. And he’s a guy who goofed around with Elvis, sharing the same piano keyboard on a ‘What’d I Say’ jam. Then, while playing as part of the Factory club house-band, there was a drunken Jim Morrison stage-invasion. ‘Basically shy and soft-spoken and very intelligent’ says Alan, the Lizard King was ‘a complete asshole when he was drunk’. Alan also got cornered in the elevator by a sexually predatory Janis Joplin, who was placated by taking his fur hat, which she wears in several subsequent press photos! Jimi Hendrix – ‘the Frank Sinatra of the guitar’, was also victim of a condition that Brackett names ‘The Syndrome’, an addictive personality, amplified by fame. Unlike Zappa, another friend, whose stimulant of choice was simply being a workaholic.

As a kid growing up in Santa Barbara, Alan’s Mom woke him to watch the sky-flash of the nearby Yucca Flats atomic bomb tests, then he got to shake hands with a campaigning Richard Nixon… something he’d later defensively joke about. He and older brother Roy set up their own local radio show, promoted through a Xeroxed fanzine. Around the same time he starts playing drums in a Junior High dance-band, switches to piano, starts writing his own songs and records a Doo-Wop demo as the Enchantments. He tours the hootenanny Folk-scene with the Hillside Singers, sees the Five Blind Boys Of Alabama and talks with Bobby Womack – their seventeen-year-old guitarist. He meets Richard Pryor who suffers from bad acne, and cuts his first real single, a JFK tribute “On A Hillside In Virginia” c/w “Hammer Song”. But by the time he got out of his obligatory six-month spell with the Marines the British Invasion had changed the rules. He plays fill-in drums with Jan & Dean, but blows out a Beach Boys audition because they’re so untogether.

These are unreliable memoirs – Alan does a camp hand-holding live routine to what he calls the Everly Brothers ‘We Hold Hands’… he probably means “That’s Old-Fashioned”. And he remembers the names of his cats more than his overnight girlfriends. When Alan is diagnosed with leukaemia, one magic cat takes the disease upon itself and dies, so that Alan’s next test comes back clear. Mind you, he was taking acid trips with Doug Dillard at the time! So there’s sex and drugs, but there’s also the more gritty Rock-life of studios and producers, clubs and sound-checks, writing songs and rehearsing them, guitars and drum-kits. Iron Butterfly and Clear Light, Electric Flag, Quicksilver and Moby Grape. And the support-band who trash their borrowed instruments and speakers, resulting in riot. ‘I have never liked seeing instruments destroyed by anyone’ says Alan. There were two big Peanut Butter Conspiracy albums, then a long wind-down. Sessions for a third album for the Challenge label produces his biggest hit – accidentally, when Three Dog Night cover his song “Good Feelin’”.

In some respects this ‘journey’ is the generational garage-band surf and girls, getting high and grossing-out story, and although Alan didn’t go as far as some, he took it further than most. ‘We often take our lives for granted’ he sums up, ‘and don’t realise when things are unique and special.’ Don’t be a miser, turn on a friend to this book. View all posts by Andrew →
This entry was posted on 10 January, 2018 in homepage and tagged ALAN LEE BRACKETT, Andrew Darlington. Bookmark the permalink.

One Response to ‘ALMOST FAMOUS: JOURNEY TO THE SUMMER OF LOVE’