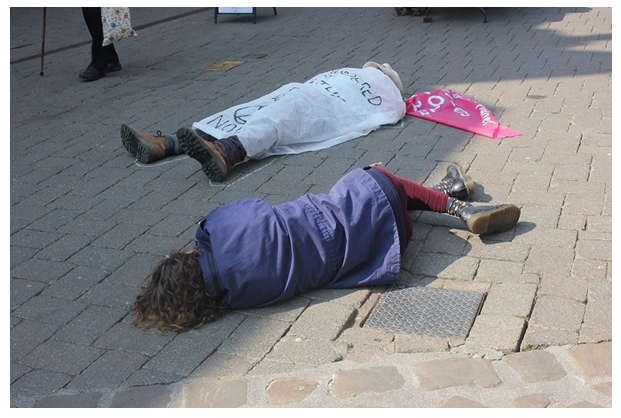 On Wednesday 17th April, members of Extinction Rebellion South Lakes staged a Die-in around Kendal market place. The weather was beautiful and who is ever going to complain about that? Unfortunately, far too many people still seem to share demagogue Donald’s[i] delusion that all global warming amounts to, is lucky people in temperate zones getting more sun. As a recent casualty of increasingly unstable weather systems, the population of Kendal and villages nearby must be uneasy about this. Yet it’s always been amazing, how sunny weather and the onset of spring is apt to ameliorate or dim our fears – as if us and our beautiful landscapes with their trees in blossom and the cheer of daffodils will be here forever[ii]. Despite the broken bridges that remain broken, left behind by Storm Desmond, we are all too easily reassured. The body is simple in its reaction to warmth and light and the attractions of market day.

Setting up signs and banners in three different parts of the square, chiefly outside the low chains protecting the war memorial, at first, we passed unnoticed – the colourful signs and lettered flags taken for a precursor of carnival? Careful not to conceal any information already present on the windows of two untenanted shops, our own placards were propped or masking-taped to the glass. When we left, the only real sign of our presence would be the chalked lines around the fallen bodies, including those of children who spontaneously joined in. The only damage that occurred was caused by an officious security guard to whose initial crocodile smile we had granted a charitable benefit of the doubt. Taking advantage, while we were dying elsewhere in the square, he ripped down Wendi’s banner, also throwing her treasured bicycle to the ground – all part of the job, only doing his duty.

By contrast the community police officer who chatted with us a while, cheerfully agreed we were doing nothing he considered illegal: the disused shop was ‘a civil matter’. 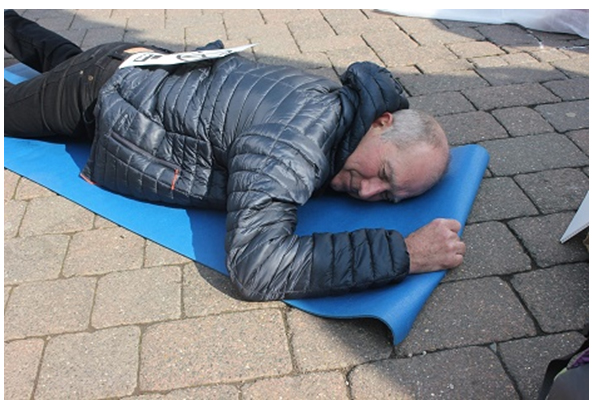 With various members of the South Lakes group away for the duration of the main Extinction Rebellion event in London, our numbers were limited. Arrest however, seemed unlikely and the greatest block in many of our minds may have been embarrassment – that classic British trait?

Never underestimate the effect of embarrassment. If it wasn’t for crippling embarrassment, you never know, I might have taken up ballroom dancing, or any type of dancing. Or learned languages freely.

A Cornish friend of mine, an eco-activist since the 70’s – who held secret midnight discussions with Swampy in the 1990’s and was an invited guest at C40’s[iii] 2011 conference in Sao Paulo – was adamant that action needs to be taken at every level, from every possible angle.

The thought that the Home Front is just as crucial as the Front Line, was one I kept in my mind to deflect disappointment at not being able to get to London – a regret of other members too. But if some considered Kendal a soft option, others were not convinced.

One interested office worker, who soon became a member, said she’d been down in London and felt quite comfortable joining the throng: the largeness of the company making her feel safe. In Kendal our group fluctuated at around 16. Crowd support and back-up were, to say the least, limited. That, she felt, would have made her think twice.

By contrast, a lady who died there and then, wished she’d known in advance that an expensive trek to London wasn’t necessary – nor incurring the irony of extra carbon to get to an event protesting against it!

Though I admire all those resolute, tireless, folk who walked to London[iv], my ideal would have been to cycle. And maybe next time, if things don’t change fast, there will huge columns of cyclists all across the country, legally blocking routes everywhere – a wheeled echo of the Jarrow marchers. With enough warning there need be no idling engines. Everyone will know to put their cars and lorries away and stay at home. 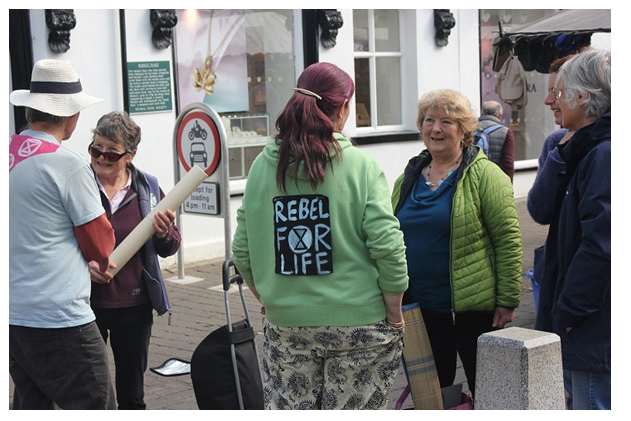 In provincial towns, many of the public appear to know little or nothing about Extinction Rebellion. To them, it’s just a story on the news about some “pesky protesters” far away, “down in London”. Seeing Kendal residents they recognise – many of them pensioners with no experience of making a spectacle of themselves or braving abuse, determined for the sake of their grandchildren to make their point and explain what XR is about – really opens their eyes. It becomes personal rather than a fleeting headline. Our purpose in Kendal was not to disrupt ,but to try to publicise and explain, and although we had two or three hysterical people railing against us, generally, there was interest and support. Even the stallholders trying to make a living, were not all hostile.

Not wanting to disadvantage any of the stallholders in particular, after an hour we altered one of the locations of our dying. I asked the trader on the vegetable stall if he minded us dying nearby and he said not. Taking a leaflet to read at home, he only cautioned us against the shifting shade.

Undoubtably, there is a vulnerability felt in lying on the pavement. With eyes shut, all the passing comments of support or scorn, impatience or contempt, become magnified. Yet talking was harder for me . . . at least at first. Others went through this same transition. My partner, who tends to be reserved in interactions with strangers, quickly warmed to the task. By the end she felt empowered. At last she was doing something instead of just worrying – and if things turned nasty we had a plan to ensure at least one of us would be free to pick the children up from school.

I’m not sure I felt empowered, but I did eventually manage to engage a few sceptics – who hopefully walked on with at least some idea of the crisis we are in.

“When you lot can do something about over-population let me know!” One woman challenged, and it was tempting to emphasise how wars, plagues and famines linked to climate change are already common and will only get worse. It’s always difficult to avoid the temptation towards fatalism that underlies the go-for-broke mentality so prevalent all over the world.

Throwing leaflets straight in the bin or refusing eye-contact were probably less common than the polite statement “I’m O.K. thanks” to proffered leaflets – a reaction which riled some of my comrades – struggling perhaps to resist the retort of “Not for long!”

The dilemma of how forceful we should be – purely verbally – stays with me. Long arguments with bitter opponents absorb valuable time, as does preaching to the converted. The background hope is that some people between these extremes, will later usefully reflect on a few points gently made.

The role of chief hysteric went to a woman ranting about our lack of respect for the war memorial. This, we stayed outside and fixed nothing to. We merely lay down nearby. Personally, I saw this more as a homage. What was the point of all those soldiers dying, only for us to trash the world they died for?

The war against extinction, against apathy over climate change and our own careless consumerism, is more urgent even than the fight seventy years ago, against the Axis powers. 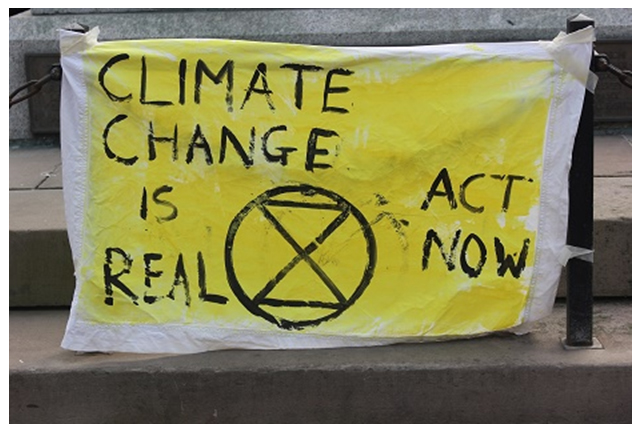 Anyone wishing to contact XR South Lakes can do so via this email address: [email protected]

[i] Trump, not duck!
[ii] A past neighbour under the Howgill Fells recalled: “About 40 years ago, Dent church had daffodils sent up for Mother’s Day by an ex Dent resident living in Cornwall. Don’t need to do that now – the daffs are always out up here by then and this year, by Mother’s Day, most will be finished.”
[iii] https://en.wikipedia.org/wiki/C40_Cities_Climate_Leadership_Group
[iv] https://rebellion.earth/2019/03/11/earth-march-day-1-lands-end-marchers-begin-5-week-walk-to-london-to-raise-awareness-of-climate-emergency/

Tweet
Tweet
This entry was posted on 20 April, 2019 in homepage and tagged Kirsten Freiesleben, Lawrence Freiesleben. Bookmark the permalink.

2 Responses to An Extinction Rebellion Tie-in Die-in (!) in Kendal