An Outbreak of Santas (and other archetypes) . . .

Posted on 19 December, 2020 by Lawrence Freiesleben

A village some miles to the east of us reported an unexpected outbreak of Santas! We rushed off to investigate: 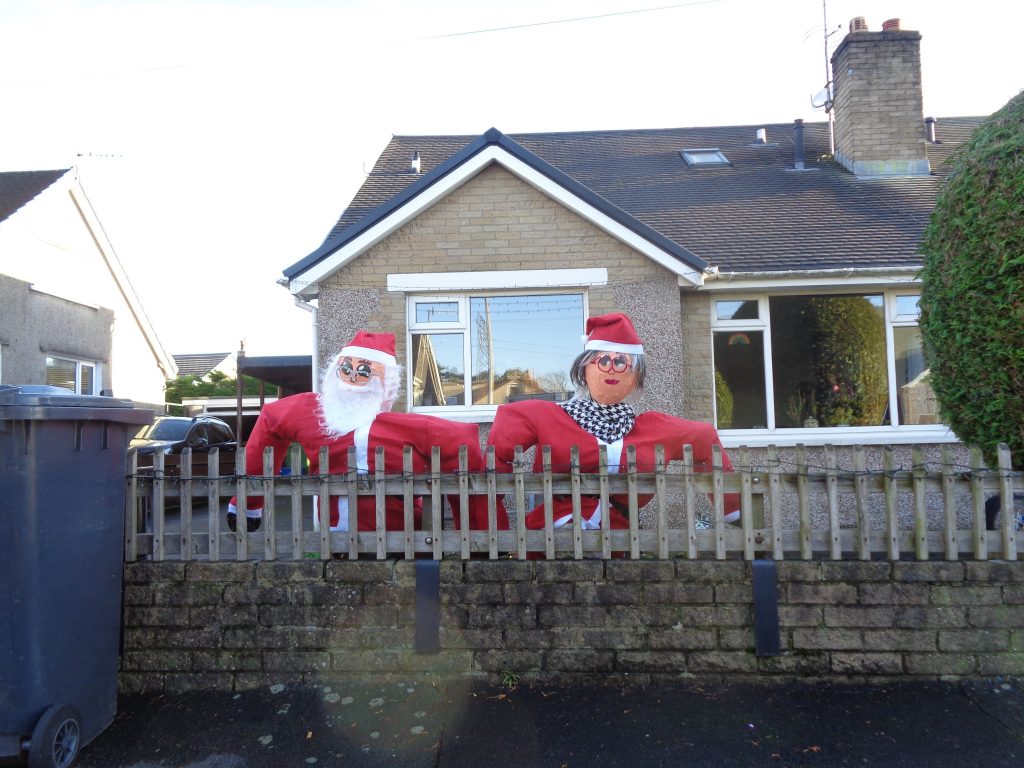 The rumours proved all too frighteningly true . . .

Later, under cover of darkness, we went to discover how widespread the phenomenon was. Who were these alarming creatures and from whence were they coming? At Trevenna, near Cark in Cartmel, we thought we’d discovered the mother ship, but we could’ve been wrong: Back in the comparative safety of daylight, a bungalow in Shernest, appeared to be generating squadrons of Santas – and vaguely associated archetypes: reindeer, fairies, snowmen and Nutcrackers, angel Virgin Marys, penguins, mushrooms, logmen (!?) and gnomes – not to mention giant candles: 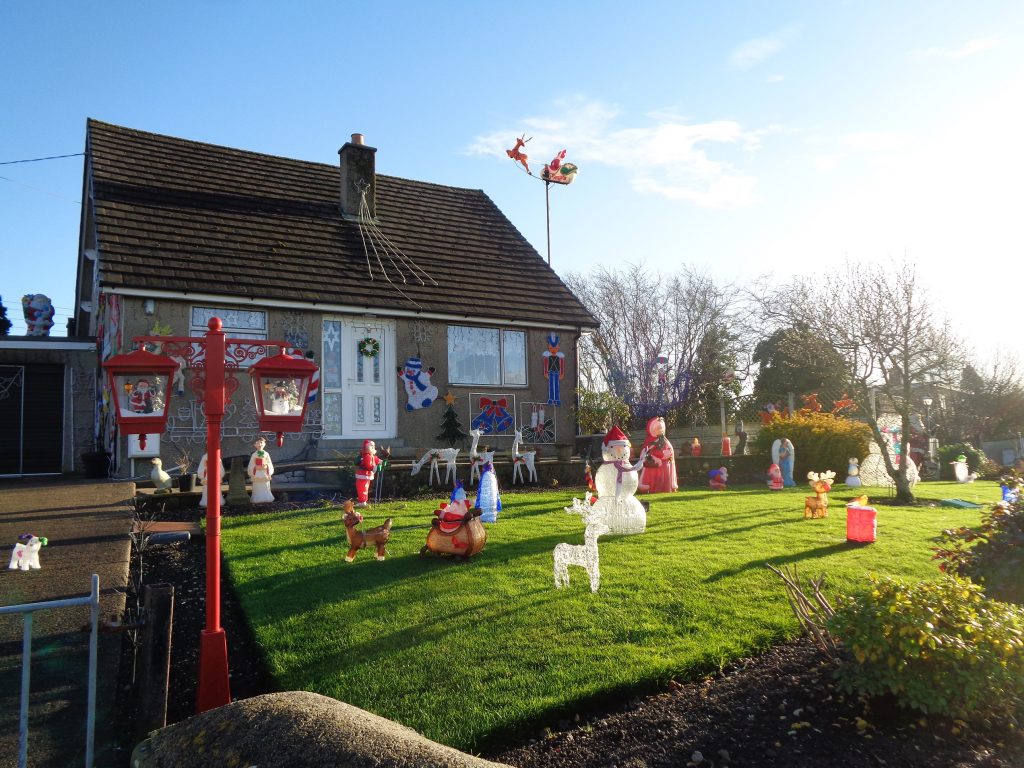 Largely, I’ll shut up now and stick to the visual evidence: 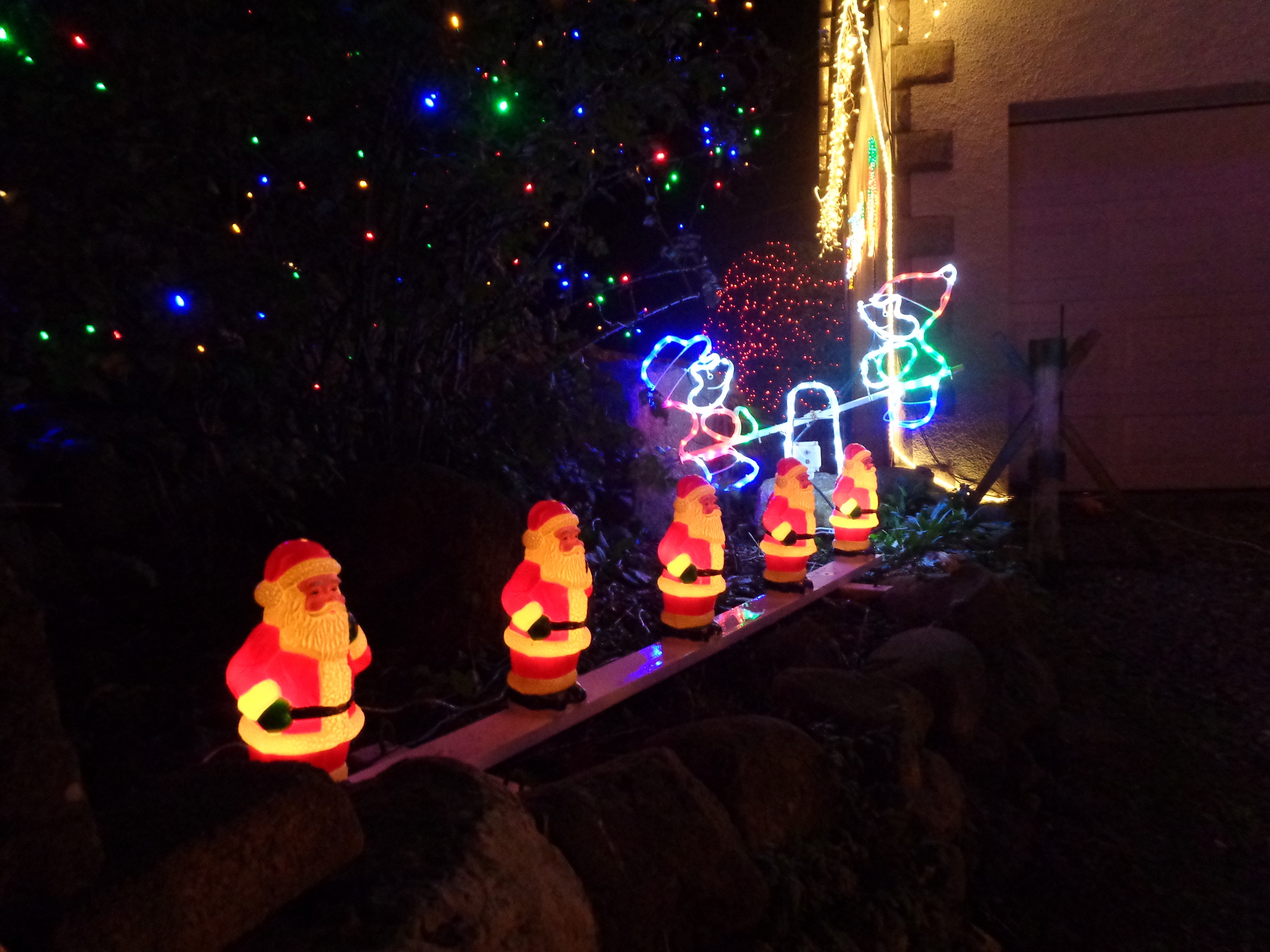 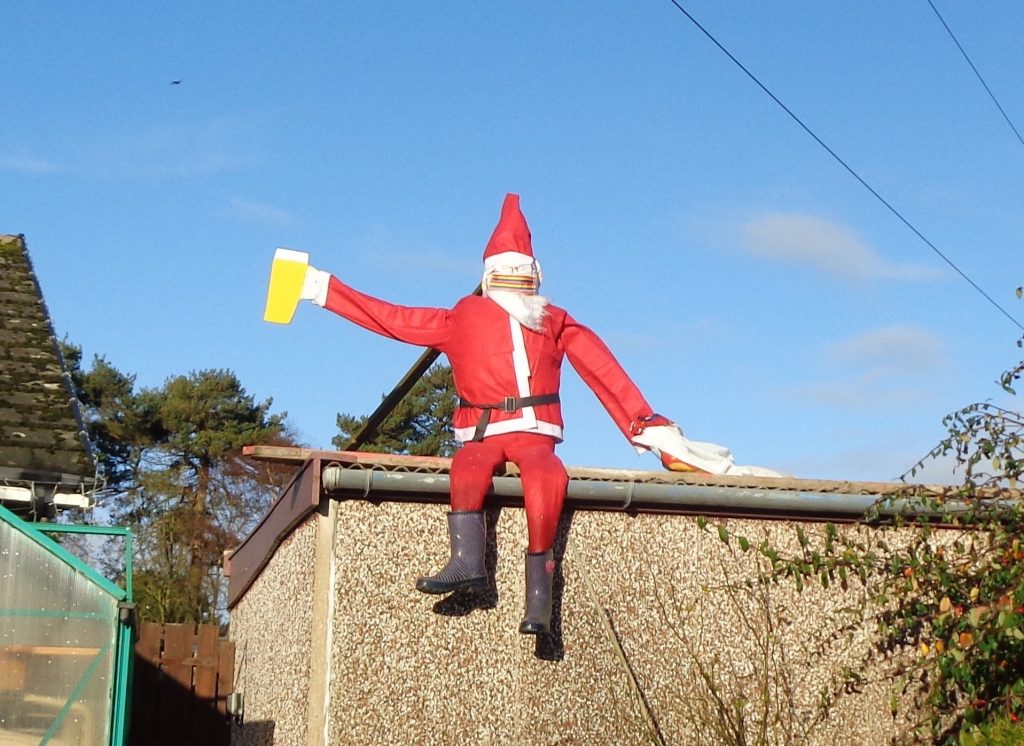 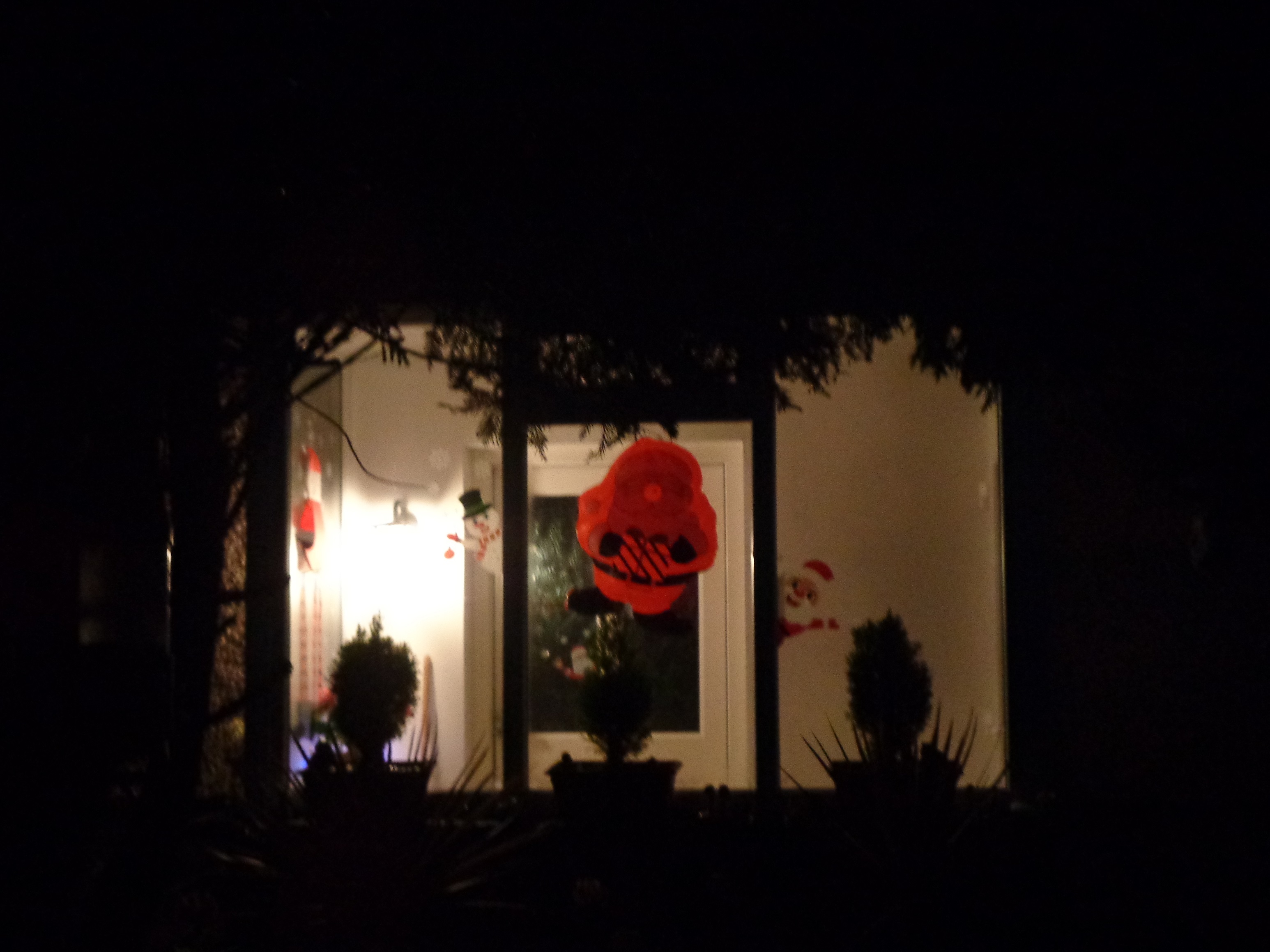 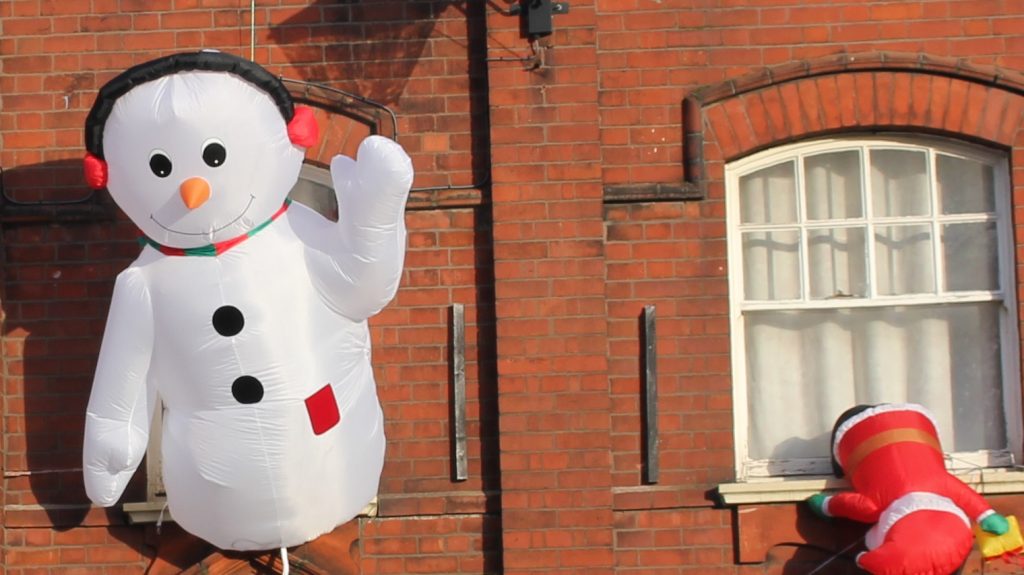 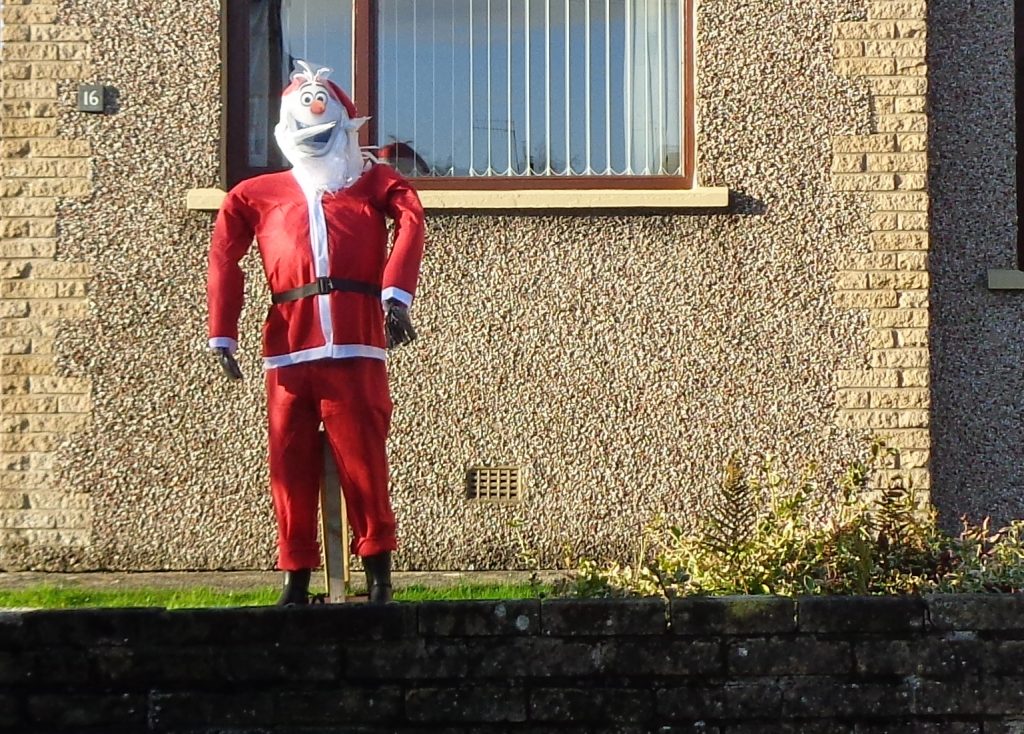 In Grange-over-Sands, the strangest decoration my two young daughters and I saw – in the window of the Christian Hotel – was an upside-down Christmas Tree. Being erratically educated and thinking of the popular, Black Mass/Satanic connotations or misunderstandings[i] of the upside-down Cross in Christianity, we became very suspicious of this ominous and sinister object. Yet apparently, this upside-down tree malarkey dates right back to Saint Boniface[ii].  Upside-down trees are also, currently, a trend[iii] it seems – you need look no further than eBay[iv]. 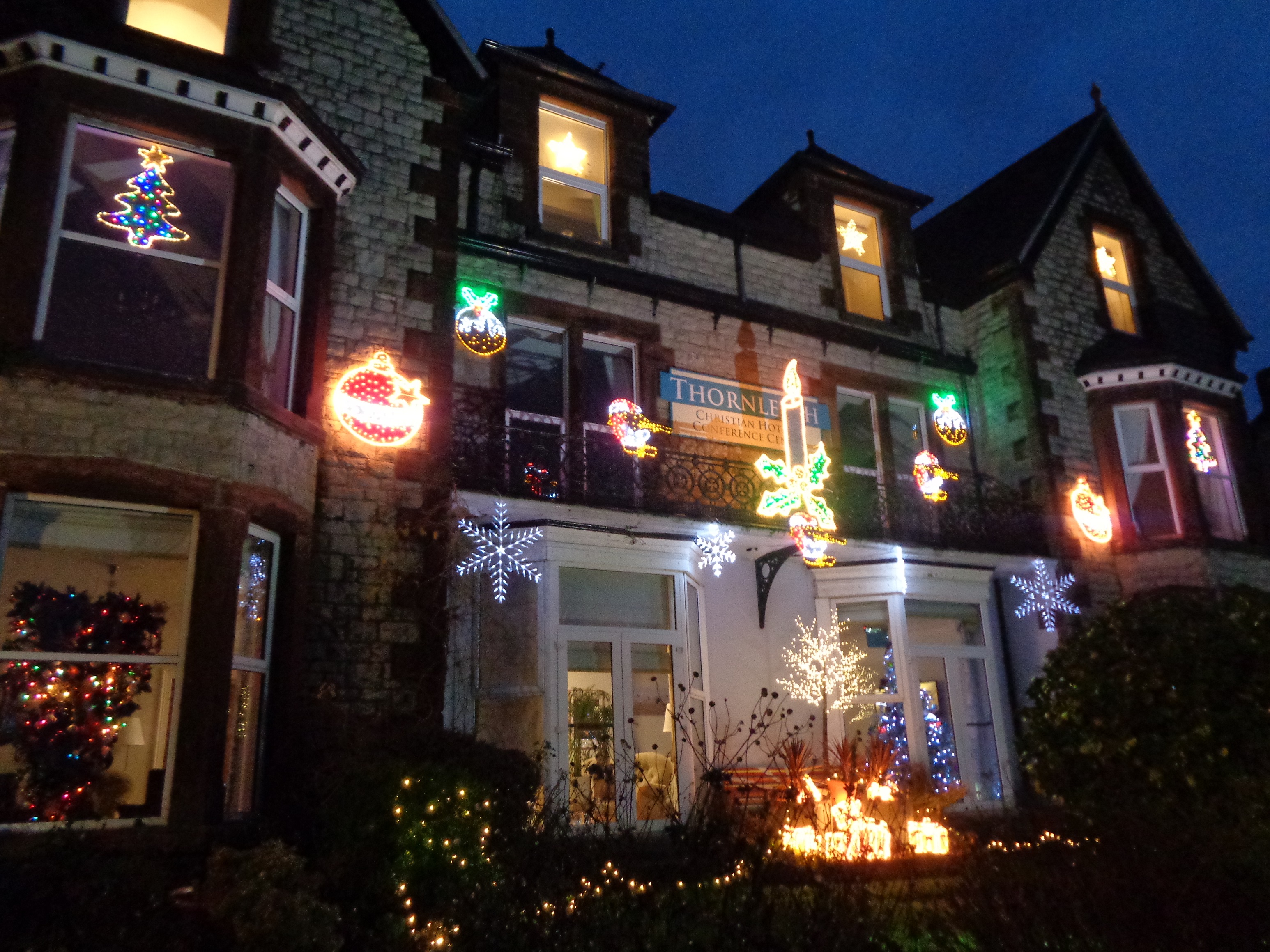 Rather meanly, seeing some pagans worshipping an oak tree, Boniface chopped it down to replace it with a fir – they must’ve all had to hang around a while – and then, chopping that down, used its triangle shape to explain the Holy Trinity . . .  All of which doesn’t explain why the fir needed to be axed to provide this illustration, since either way up its more isosceles than equilateral. Now, if Boniface could have got the fir to grow upside-down – after all, he was a Saint – not only would that have been impressive, it might even have made up for the comedown of replacing Oak with mere fir. What most surprised me about this legend, is that despite working at Crediton in the mid-1980s, I’d never come across it before. Well

acquainted with Boniface (not personally, but the Devonshire town was his birthplace), as well as familiar with Crediton’s beautiful, red sandstone church – which has the grandeur of a cathedral – the Saint’s tree-chopping prowess had completely passed me by. A Liverpudlian friend of mine – we used to eat our sandwiches in Crediton’s churchyard – was convinced, despite all evidence to the contrary, that Boniface must’ve been a Geordie, hence his name: Bonny-face. Whereas I imagined it was because he was craggy looking and determined. Either would do I suppose, to further the career of a Saint. 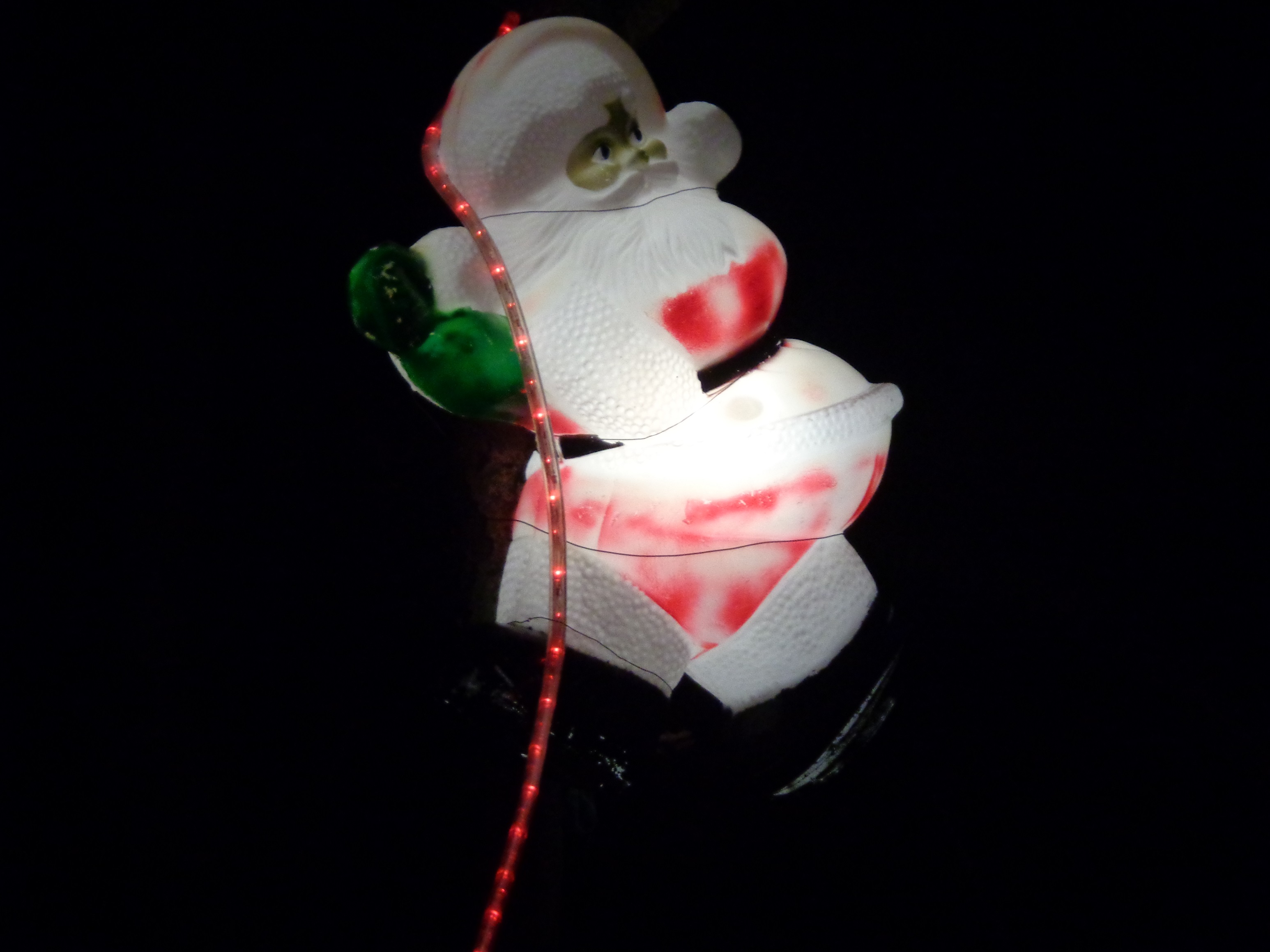 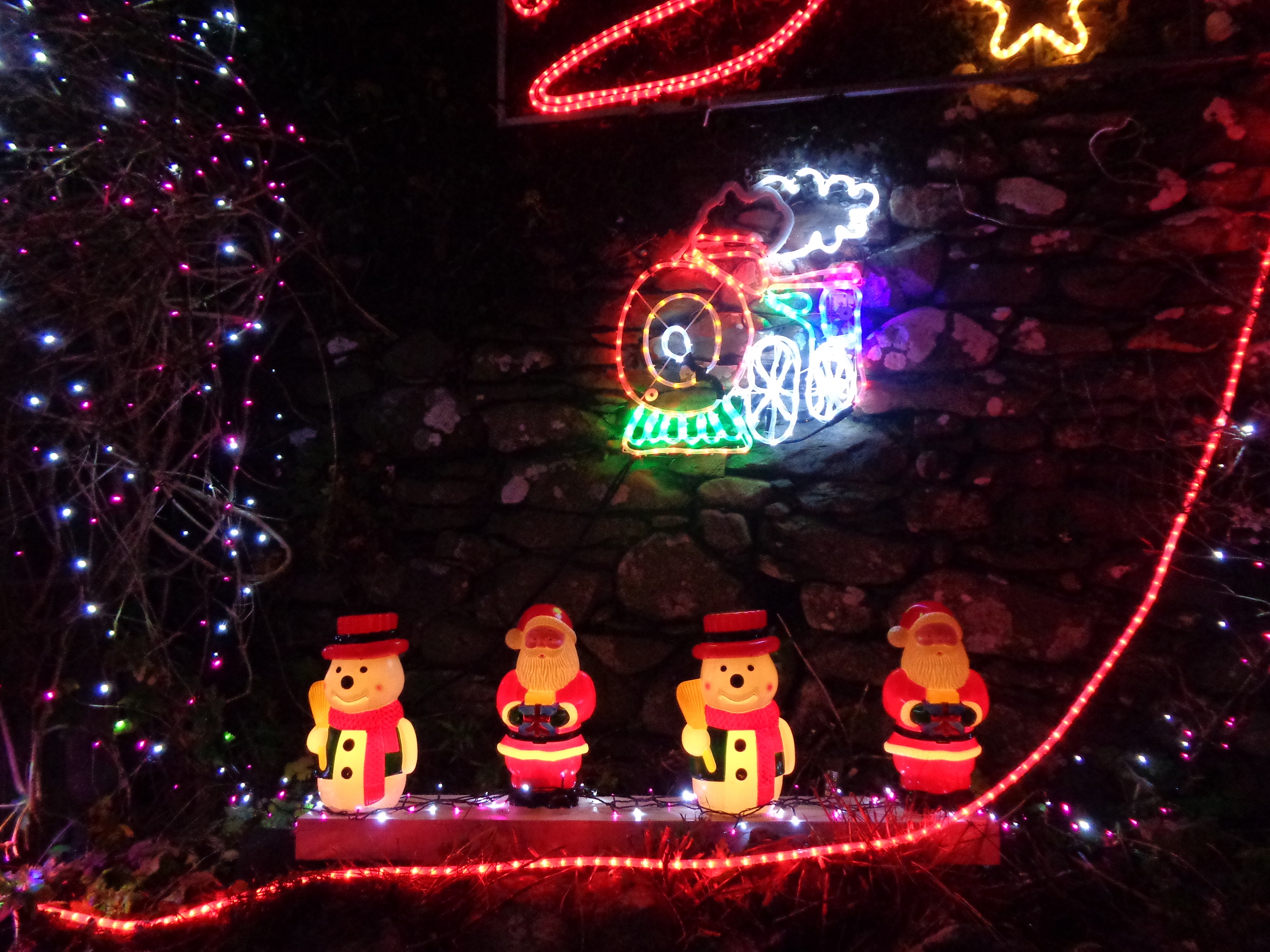 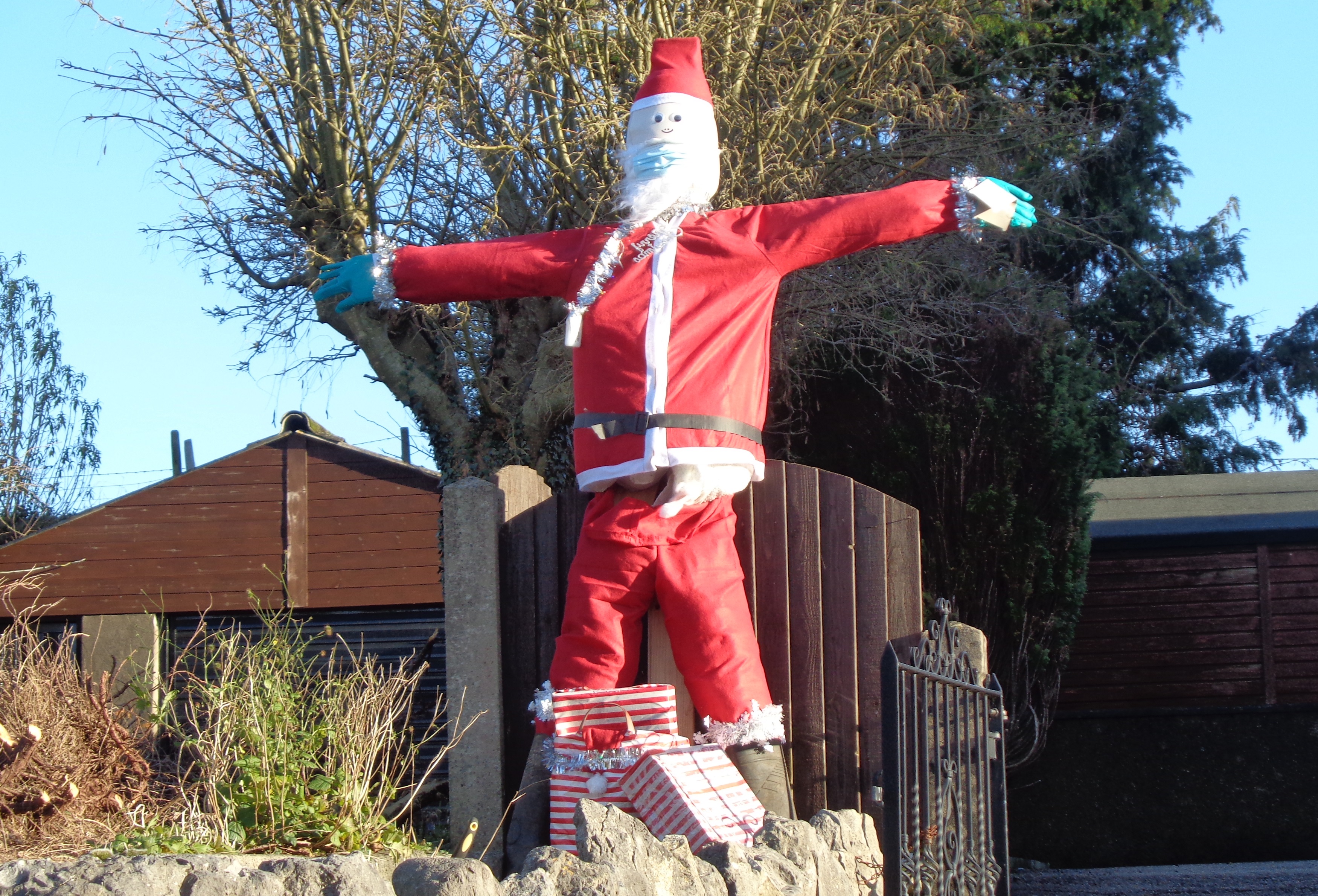 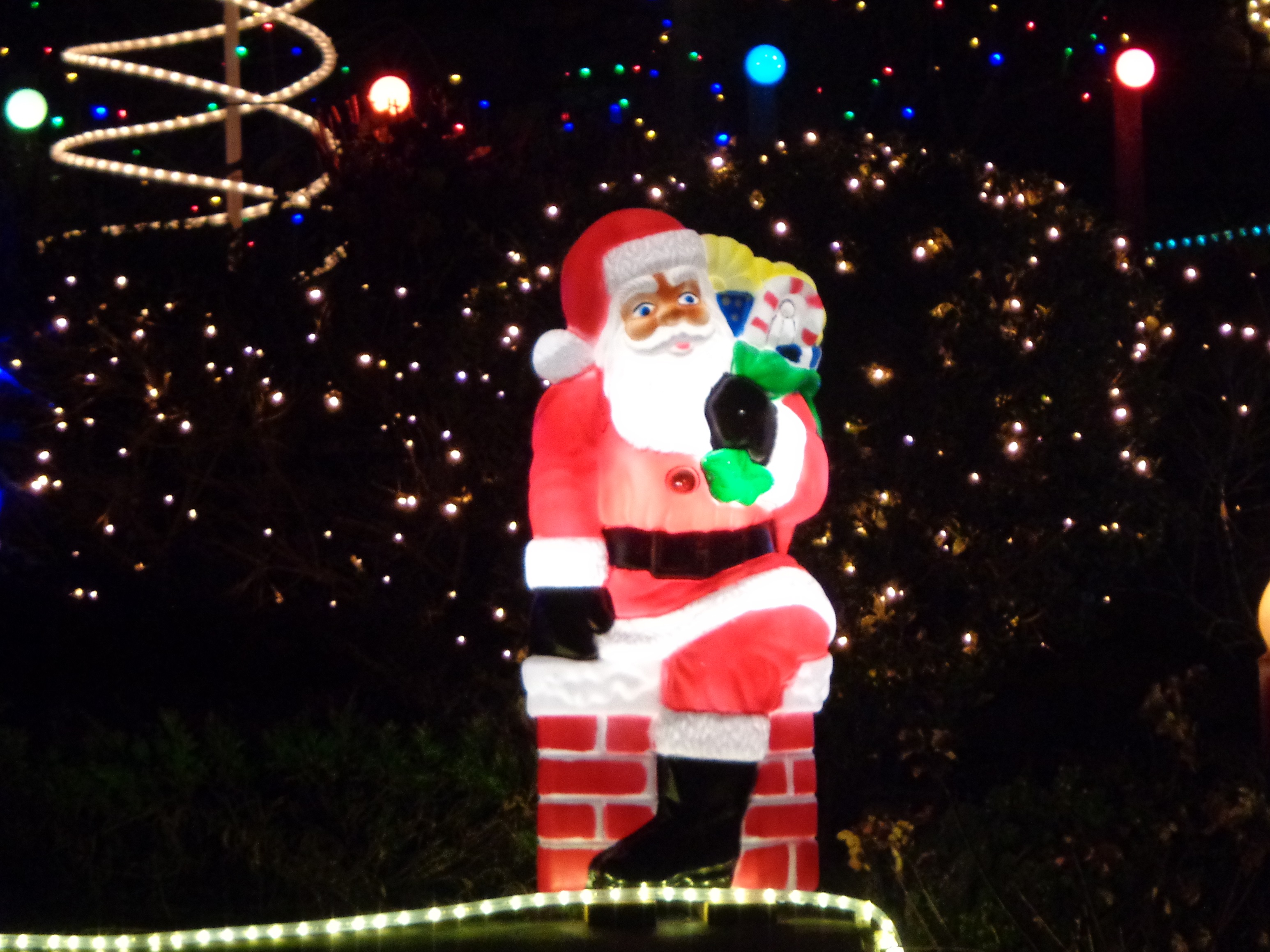 Santa on a spangly night 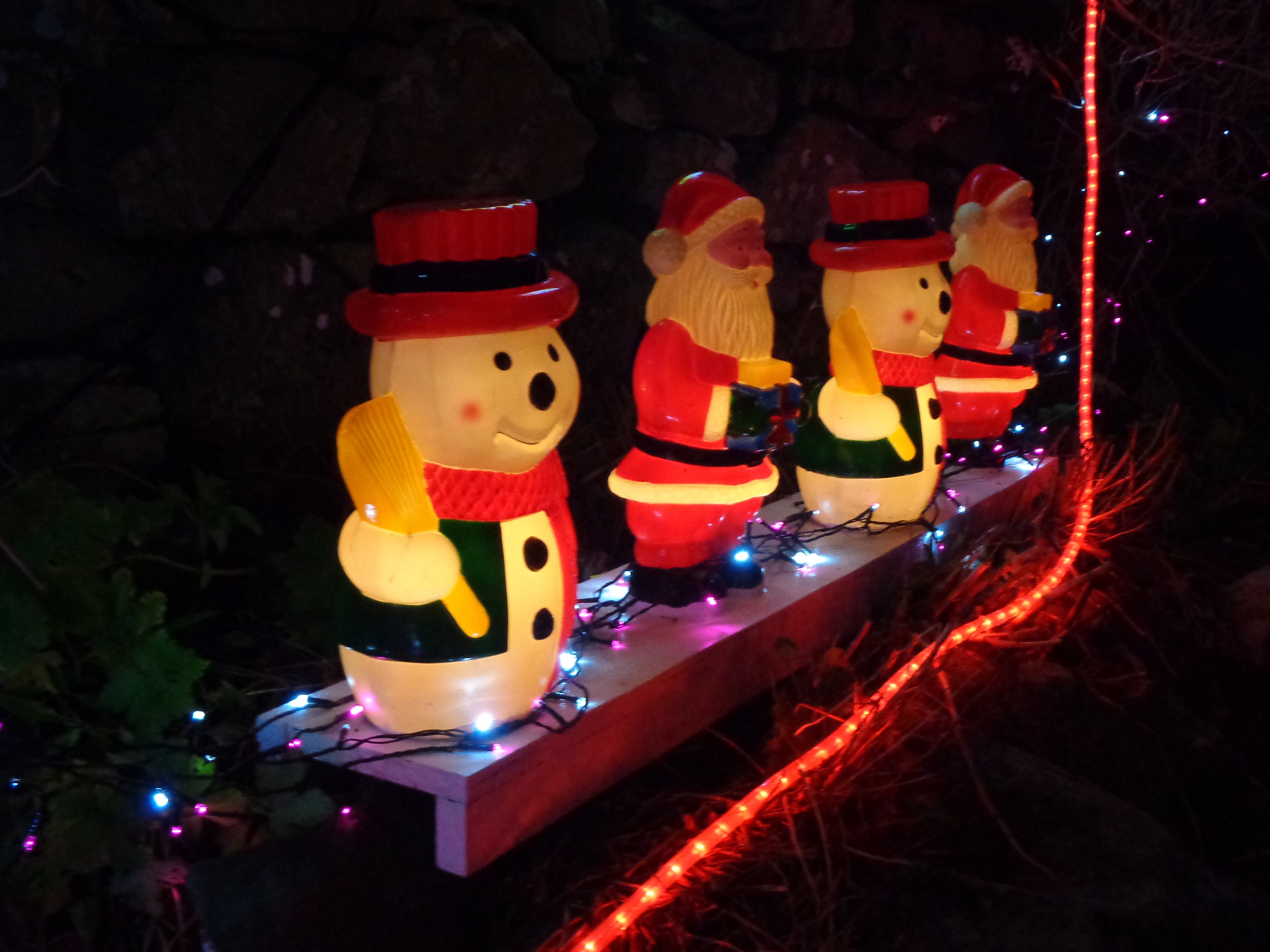 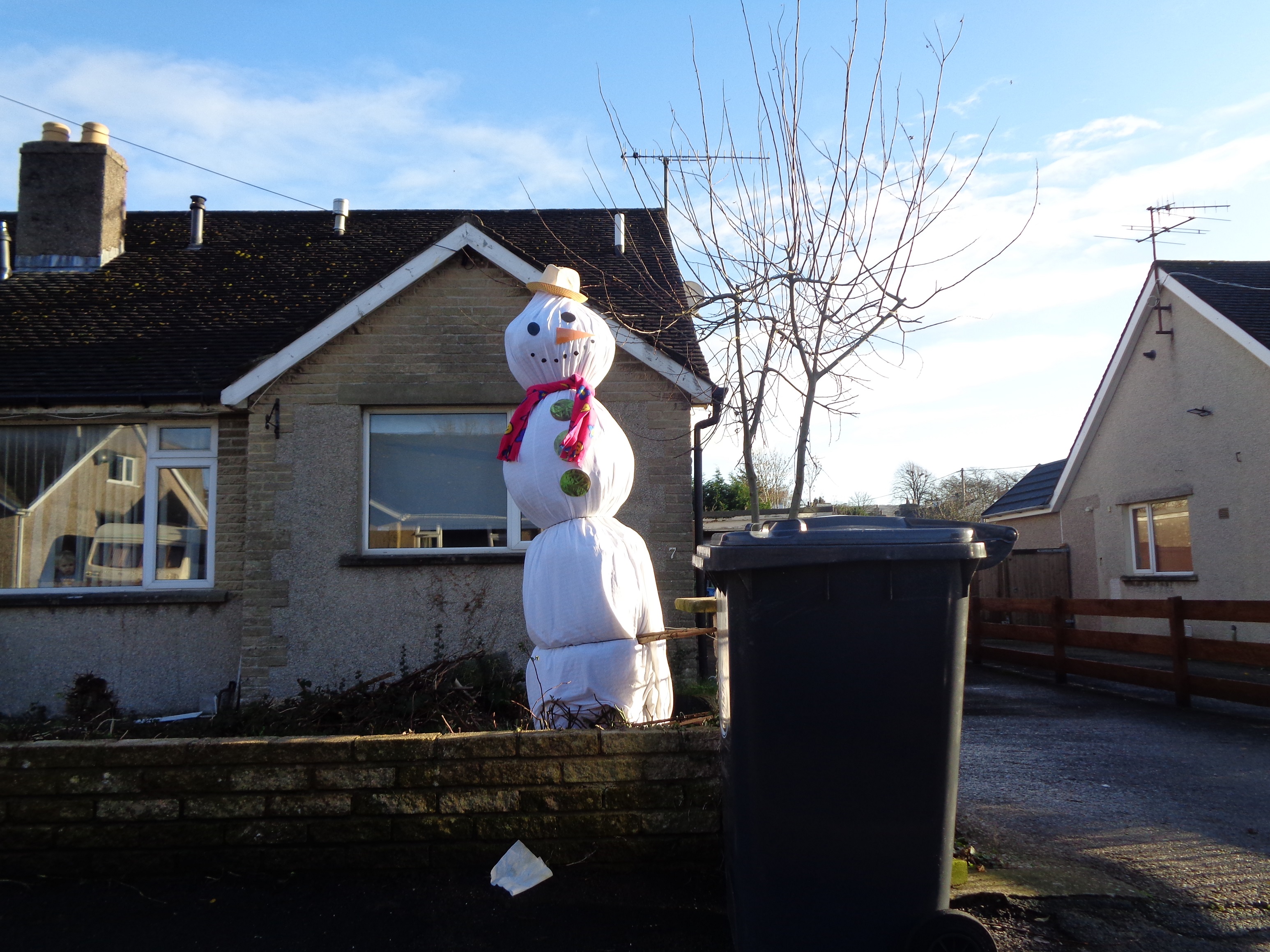 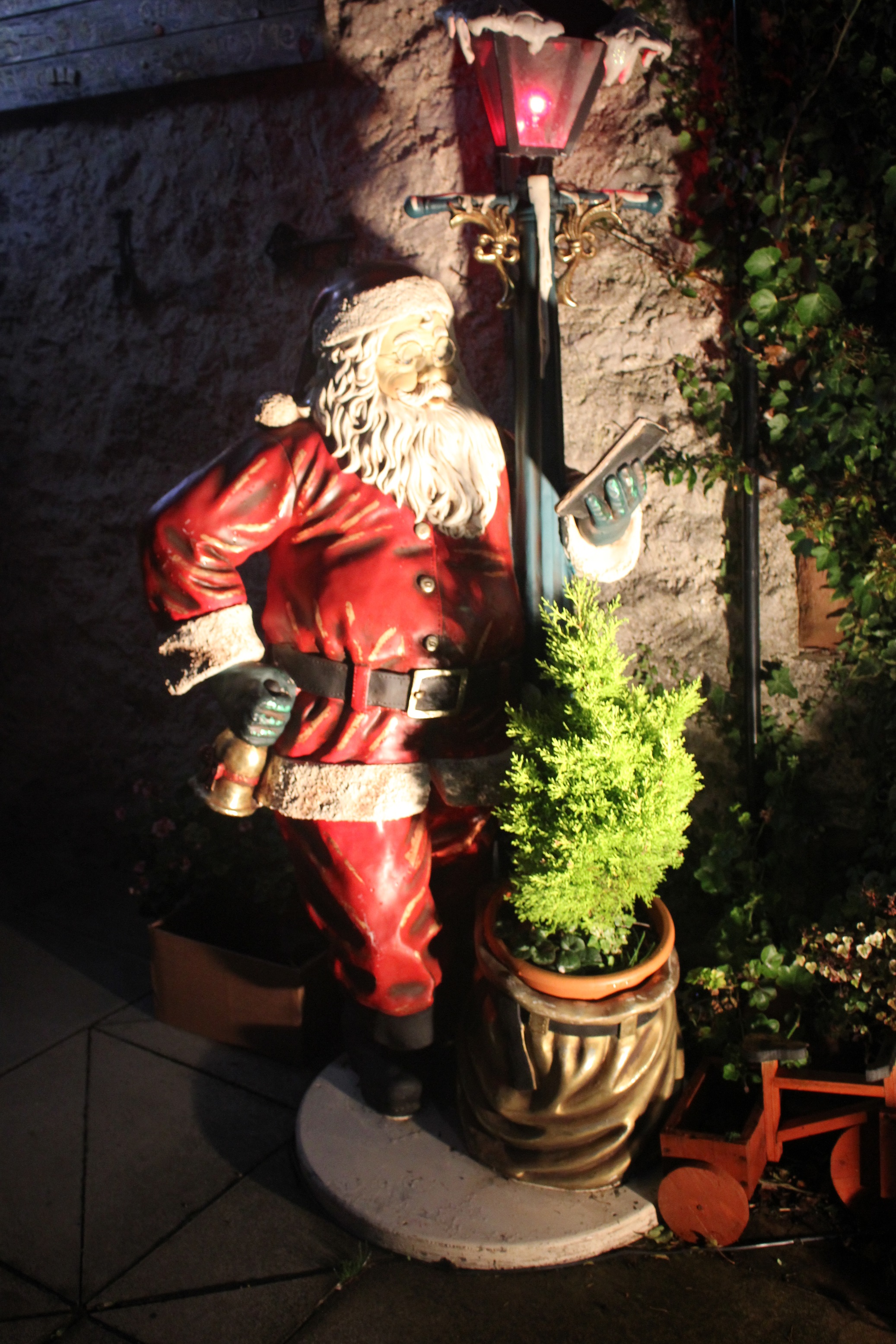 [iii] Though no doubt a very unstable one!  https://www.goodhousekeeping.com/holidays/christmas-ideas/a29340152/upside-down-christmas-tree-trend-meaning/

View all posts by →
This entry was posted on 19 December, 2020 in homepage. Bookmark the permalink.