The Palestinian poet, Ashraf Fayadh,
Has been sentenced to death for his words.
Saudi’s religious police, the mutaween,
Disapprove of such dissident bards.

Ashraf came to their attention through his posting
Images of subversives being flogged.
For this he himself was sentenced to 800 lashes
Then the mutaween read what he’d blogged.

They read all his poems and they decided
That this life-long Palestinian refugee
Was an atheist apostate threatening their State
By writing poems about being free.

He was therefore to be retried by another court
And, unable to respond to the State’s lies,
The judge enforced the full rigor of the Saudi law
And sentenced him to pay the ultimate price.

The head that devised ‘Instructions Within’
(A book of poems by Ashraf Fayadh)
Would be cut from his body in ‘Chop Chop Square’,
The cruel site of decapitation in Riyadh.

Those who buy oil from Saudi will remain silent,
As will those who sell the Saudis arms.
The oligarchical state ruled by 20,000 Princes
Is to be indulged, whomsoever it harms. 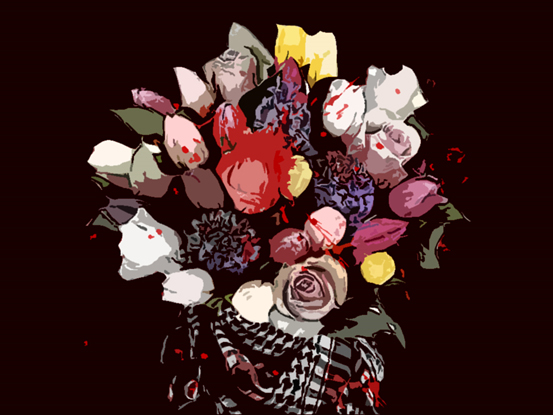 Elena Caldera, ‘For the Palestine Poet’ 2015

Instead of the key to his grandfather’s house,
And his birthright being restored,
The exiled Ashraf faces the executioner’s block
And the curved edge of a Saudi sword.

Whilst paying lip service to Allah the Merciful
The Wahhabi state worships false Gods:
A gangster plutocracy kills its poor to stay in power,
Propped up by the West’s hypocritical nods.

President Obama bows down deep to the Saudi King,
As has every President and Premier before.
But while they wrap their lips around gushing oil wells
Death punctuates the fawning of whores.