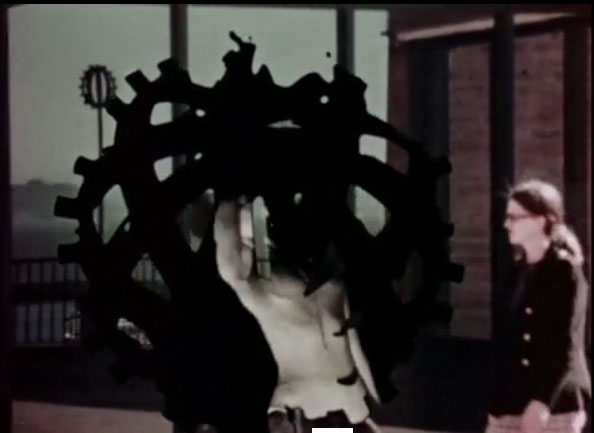 Press on link for Video
https://ubu.com/dance/cunningham_assemblage.html

Assemblage is a recently rediscovered film produced for broadcast by San Francisco’s public television station KQED in November 1968. Created in collaboration with director and former dancer Richard Moore, the film features Cunningham dancing with early dance company members in a public “happening” in San Francisco’s Ghirardelli Square. Conceived from the beginning as a dance staged for the camera, the performance is amplified by Moore’s special effects and complemented with a soundtrack by John Cage, David Tudor and Gordon Mumma. A testament to Cunningham’s groundbreaking investigations of dance and movement within the virtual spaces of film, Assemblage presents a dance that unfolds across fractured space and inside shattered time. Cunningham explained that “the finished film [would] deal not so much with dance in the narrow sense, but with various motions – boats moving, people walking, and, of course, groups dancing.” On screen, Cunningham’s dancers walk, frolic, and scramble through the shopping concourses and promenades of the square. The soundtrack, assembled contemporaneously by Cage, Tudor and Mumma, was likewise comprised of concrete sounds mostly recorded on-site around San Francisco.Cunningham and his company spent three weeks rehearsing and filming on location in fall 1968, creating what Moore described as “movement modules.” From these sequences, Moore and film editor Bill Yahraus crafted a motion picture collage of overlapping movements and moments, which occur sometimes in fragmented film windows, sometimes within superimposed planes. Moore used extensive optical illusion and process photography, dancers were filmed as silhouettes and superimposed on different backgrounds. In one composited sequence, Cunningham’s company becomes a miniaturized troupe of Lilliputian dancers, weaving in and out of the dancing legs of gigantic versions of themselves. Rediscovered after Cunningham’s death, the restored Assemblage was transferred and colorized the film from the original 16mm prints by filmmaker Charles Atlas, a longtime collaborator on Cunningham’s dance films.

Tweet
This entry was posted on 26 February, 2022 in homepage. Bookmark the permalink.