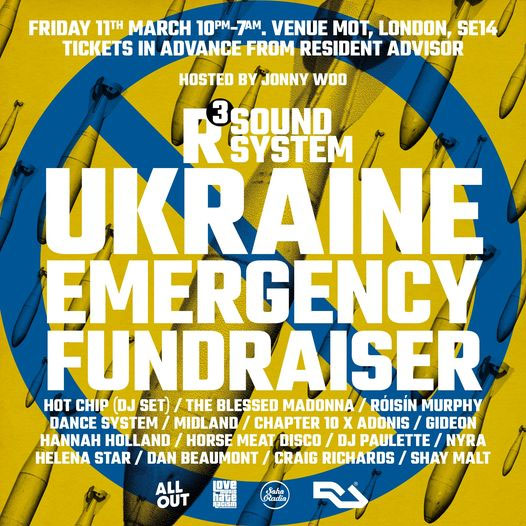 On Friday 11 March 2022, we will host 9 hours of back-to back music across two rooms at venue MOT, on a South London industrial estate in. As part of the fundraiser, we will raise crucial funds destined for aid, refugee assistance and evacuations.

The people of Ukraine deserve our solidarity at this time that has already brought deep suffering and destruction. Deaths are already rising, and during these times of terror and anguish innocent people are paying the highest price.

Thousands of people are fleeing the country and seeking protection, and there is an urgent lack of safe accommodation, food, essential medicine and provisions on the ground.

Your donation will help key our partners Bündnis Entwicklung Hilft (Alliance for Development Help), Fulcrum UA & All Out to provide humanitarian help on the ground, and support people in Ukraine and refugees in the neighbouring countries that they are fleeing to.

We stand against the Tory government’s right-wing ties to Russian business interests, its corrupt cronyism and its stance on asylum seekers. We are also encouraging supporters to contact their MPs to demand action now, and to stand against the unjust invasion of Ukraine.

Soho Radio & Love Music Hate Racism in London joins hands in solidarity with this cause and will be broadcasting live on the night of the event.

We have seen overwhelming support from so many artists that are watching in horror as events unfold, and are proud to be standing shoulder to shoulder with them in solidarity with Ukraine. Roisin Murphy has postponed her show in St Petersburg on the 11th March and beyond until there is a complete ceasefire, she will be performing at this fundraiser instead.

Confirmed DJs so far as follows, with more being added daily…

Tickets £20 in advance from Resident Advisor

Tickets to event can be purchased here.

“To see Putin crush the wonderful city of Kyiv and destroy the incredible cultural explosion was underway breaks my heart and makes my blood boil in equal measure. Music is our weapon and R3 Soundsystem will continue to use it as a force for both international solidarity and political change”

R3 Soundsystem is a consortium of DJs, musicians, producers, recording artists, record labels, festivals, nightclubs, sound systems, activists, movements and cultural organisations, all united in our love of music and our rejection of right-wing nationalism.

We represent solidarity between all nations, races, tribes, genders, sexualities, faiths and musical tastes. We are together in music.

Bündnis Entwicklung Hilft (Alliance for Development Help) is an alliance of nine German development and relief organisations – Brot für die Welt, Christoffel-Blindenmission, DAHW, Kindernothilfe, Medico International, Misereor, Plan International,  Terre des Hommes, Welthungerhilfe, and are are also associated members of German Doctors and Oxfam. Together they unite larger and smaller aid organisations that work together to respond to complex emergencies and conflicts. The alliance members provide both short-term assistance, which ensures immediate survival, and long-term support to overcome hardship and conflicts in the long term and to prevent new crises.

Fulcrum UA is one of the largest non-governmental LGBTQ organisations in Ukraine, and are advocates and champions for the community, lobbying for legislation prohibiting discrimination, civil partnership (including same-sex partnerships), and combating LGBTQI discrimination. They are currently working on the ground in Ukraine to help the LGBTQ community in cities under attack.

All Out work towards a world in which nobody has to sacrifice their family, freedom, safety or dignity because of who they are or who they love.

Tweet
This entry was posted on 1 March, 2022 in homepage. Bookmark the permalink.